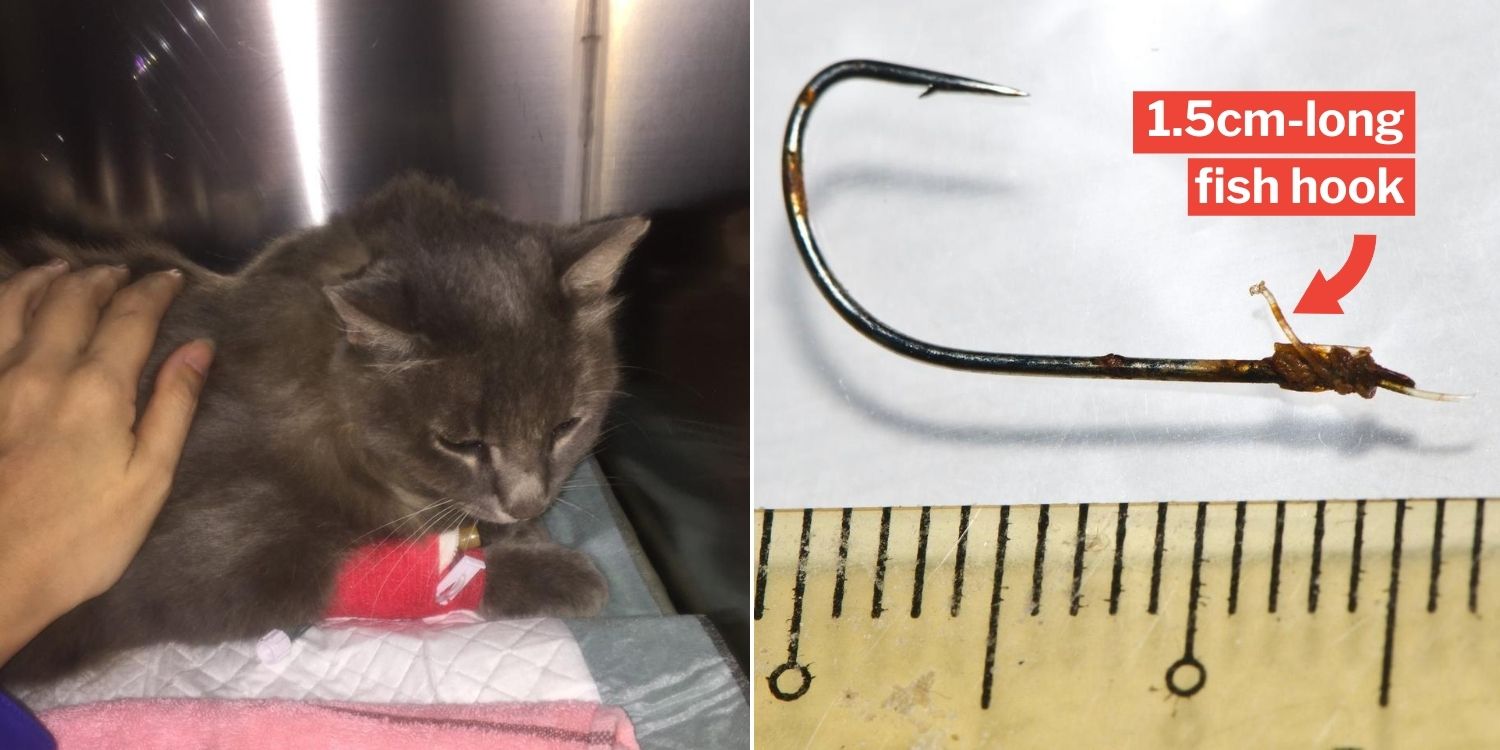 Cats strolling along our streets often bring a smile to our faces with their adorable antics. These community cats often become important parts of the neighbourhood.

One resident cat at St. John’s Island, named Prince, is similarly much beloved.

Unfortunately, the poor thing had to go through a painful and traumatising ordeal when a fish hook was entangled in its mouth and ended up in his stomach. The story was recently shared on Facebook by a netizen. According to the Facebook post, a worker caught sight of a fish hook entangled in Prince’s mouth.

He tried to remove it but to no avail.

Prince then ran off into hiding, as it must have been quite an ordeal.

However, he had become lethargic, dehydrated and could not walk properly.

Sent to the vet, hook found in tummy

Realising the urgency of the situation, residents sent him to a veterinary clinic.

At the clinic, the fish hook was clearly visible from Prince’s x-ray results. 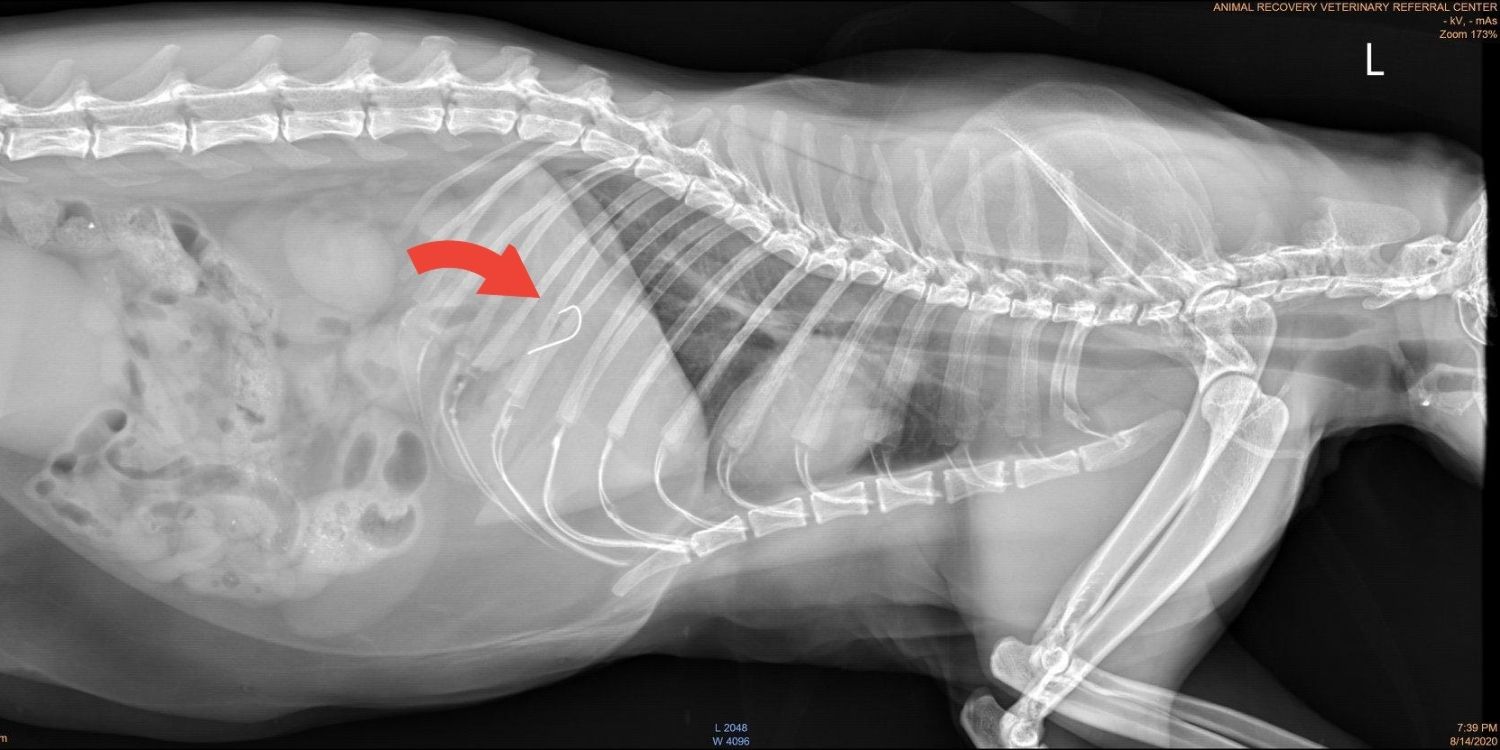 It turns out that the cat had swallowed the fish hook, and it was lodged in his stomach wall!

Thus, he was rushed into emergency surgery.

It took the vets an arduous 2 hours to gently dislodge the fish hook from the cat’s stomach without damaging the stomach wall. 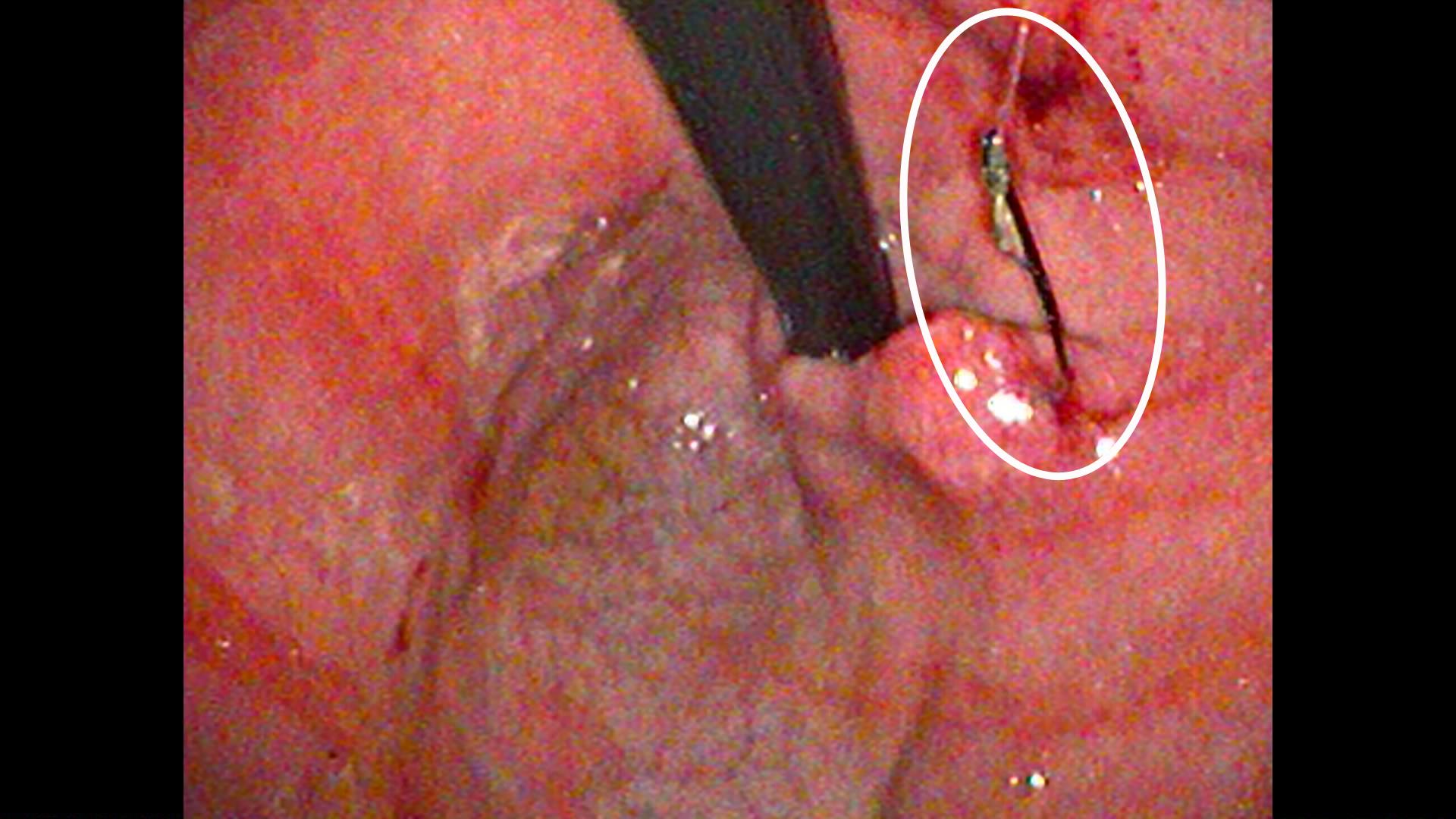 The fish hook swallowed by Prince was found to be about 1.5cm long. 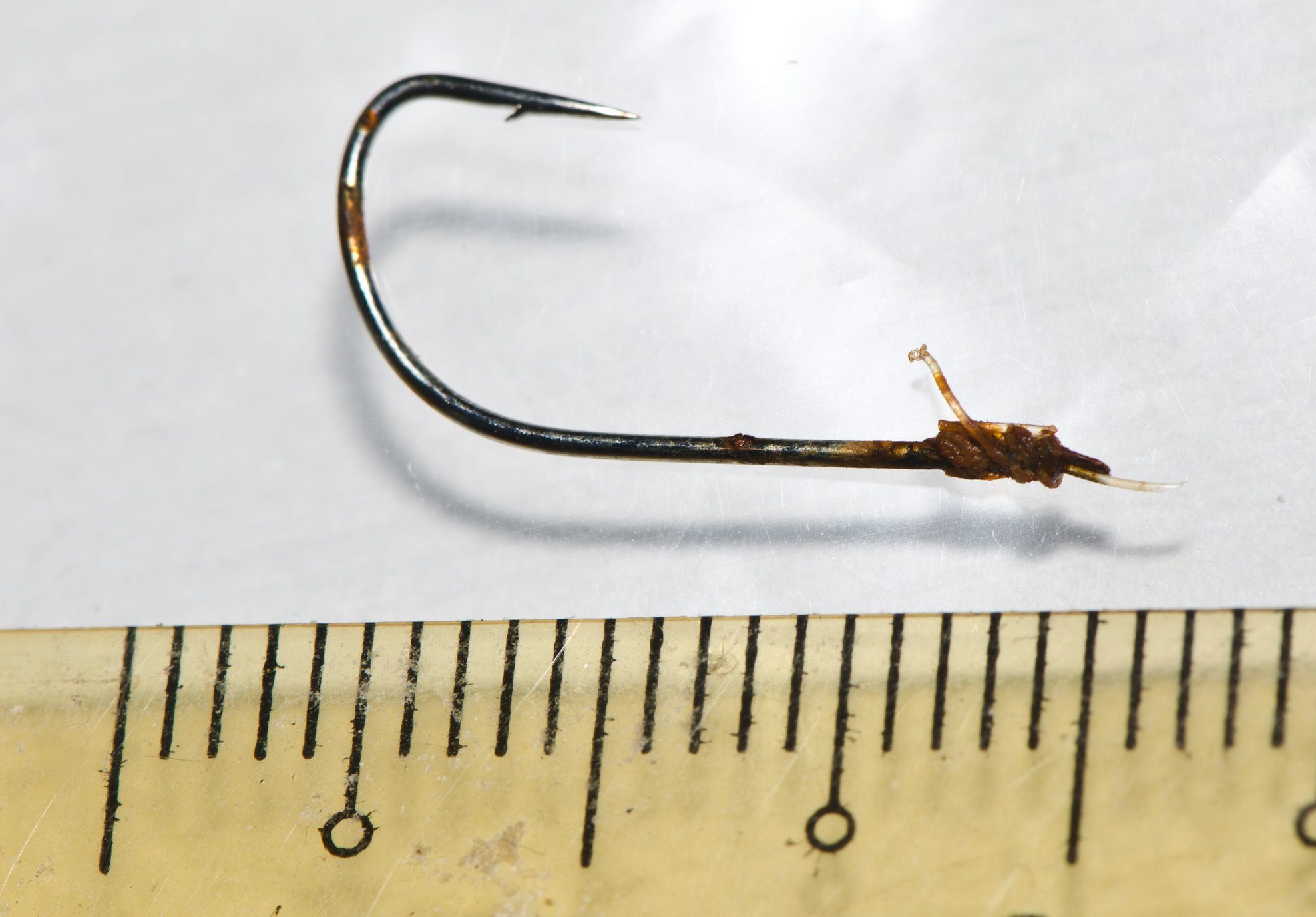 Prince now has a hole in his mouth and his stomach suffers from minor tears.

While the vets did all they could, they can only wait to see if Prince’s stomach walls will heal without further complications.

The cat’s surgery and treatment racked up a hefty bill of over $4,000.

The Facebook user even sarcastically added that this was the “most expensive fish hook”. 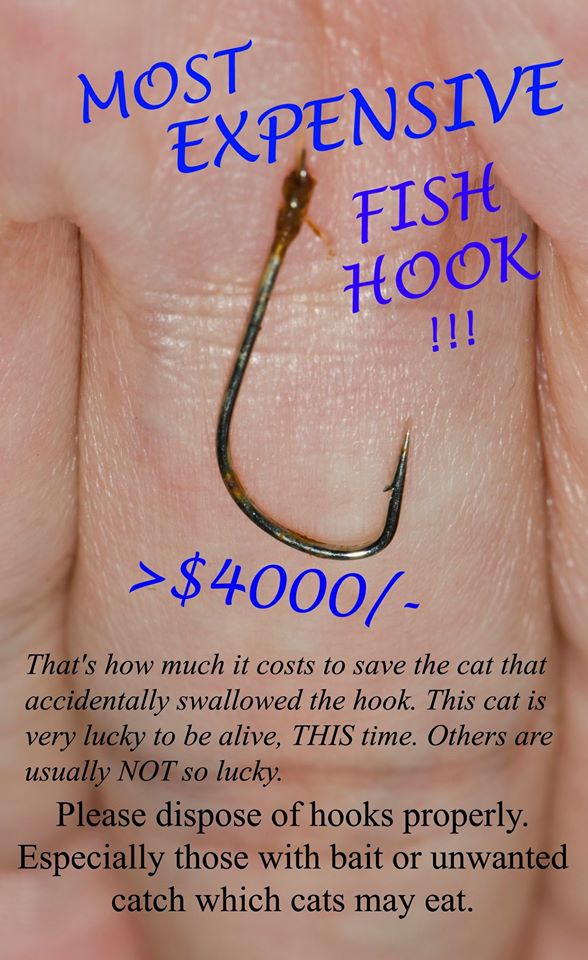 In a follow-up Facebook post, the netizen gave credit to the 2 senior vets who were on duty at the Animal Recovery Veterinary Centre when Prince was brought in. The OP also mentioned that Prince was extremely lucky in 3 areas:

While Prince was fortunate enough to have survived , he was also traumatised by the ordeal. 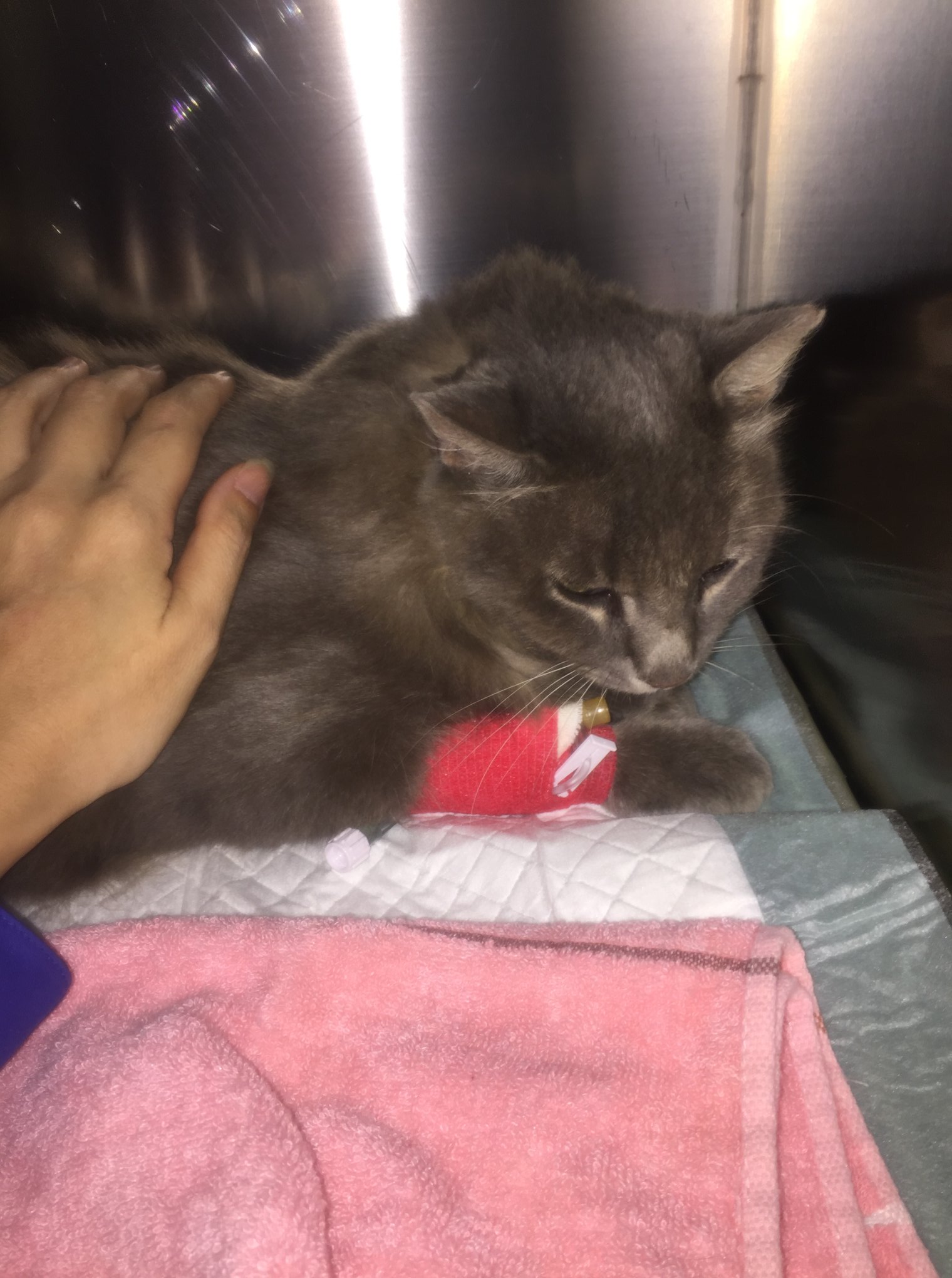 What’s alarming about the story is that it could just as easily have ended in tragedy, and other animals may not be as lucky as Prince.

Thus, the user urged the public to dispose of fish hooks and lines properly.

Improperly disposed of hooks can pose a serious threat to animals, as they often have unwanted catch or bait on them and animals looking for food will get snagged, just like Prince.

They can even be a danger to humans, like in the recent case where a girl stepped on a fish hook at East Coast Park.

Be responsible when using public spaces

It’s definitely not the first time such an incident has occurred.

The seemingly trivial act of leaving your wanted stuff in public spaces and not clearing up after yourself can cause a great deal of harm and pain to others.

The poor cat’s suffering should be a reminder to all that we should be responsible, as our actions may have serious consequences.