His children are returning to campus in Aug.

Over the past few weeks, politician Chee Soon Juan has shared his chronicles of running Orange & Teal, a café at Rochester Mall.

There’s been much support from Singaporeans, but also some struggles along the way, as he shared in his latest update on Tuesday (13 Jul).

While there was good news for fans of the cafe’s brisket, he also shared that the café requires help. 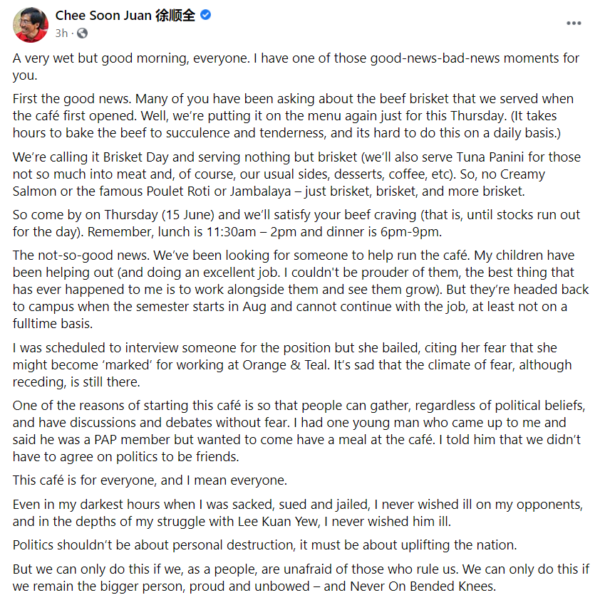 This is because Mr Chee’s children are returning to campus in Aug and they won’t be able to help full-time after.

However, an interviewee backed out for fear of being ‘marked’ if she worked there.

Orange & Teal opened last month to great fanfare by Singaporeans. However, there’ve been trials and tribulations along the way.

Staff had worked for 2 weeks straight without a break, leading to Mr Chee having to close the café on Mondays to give them a rest.

Now, finding someone to help run the café is on Mr Chee’s mind.

His children, who’ve been helping out, are returning to campus in Aug and they won’t be able to work there full-time.

He shared that he was scheduled to interview someone but she apparently backed out, citing her fear of being ‘marked’ for working at Orange & Teal.

Mr Chee lamented the climate of fear that still persists, referring to his past reputation.

His run-ins with authorities wherein he was sacked as a lecturer, then sued for defamation and jailed for being unable to pay a fine, have seemingly left many afraid that associating with him will affect their own lives adversely.

Wants people to gather at Orange & Teal regardless of politics

Perhaps sensing that some may avoid the café as he is from an opposition party, Mr Chee reiterated a goal of opening Orange & Teal.

He wants people to gather regardless of their political beliefs and have discussions without fear.

For example, a young man told him that he is a PAP member but wanted to visit the café regardless.

Mr Chee replied that people didn’t have to agree on politics to be friends.

This café is for everyone, and I mean everyone.

He ended by stating that politics has to be about uplifting the nation.

The stigma that comes with Mr Chee, although receding, still exists, which would definitely make getting help more difficult too.

However, it’s commendable that he’s put behind what he’s suffered and continues to hope for a better nation today.

We wish him the best of luck in finding a helping hand.