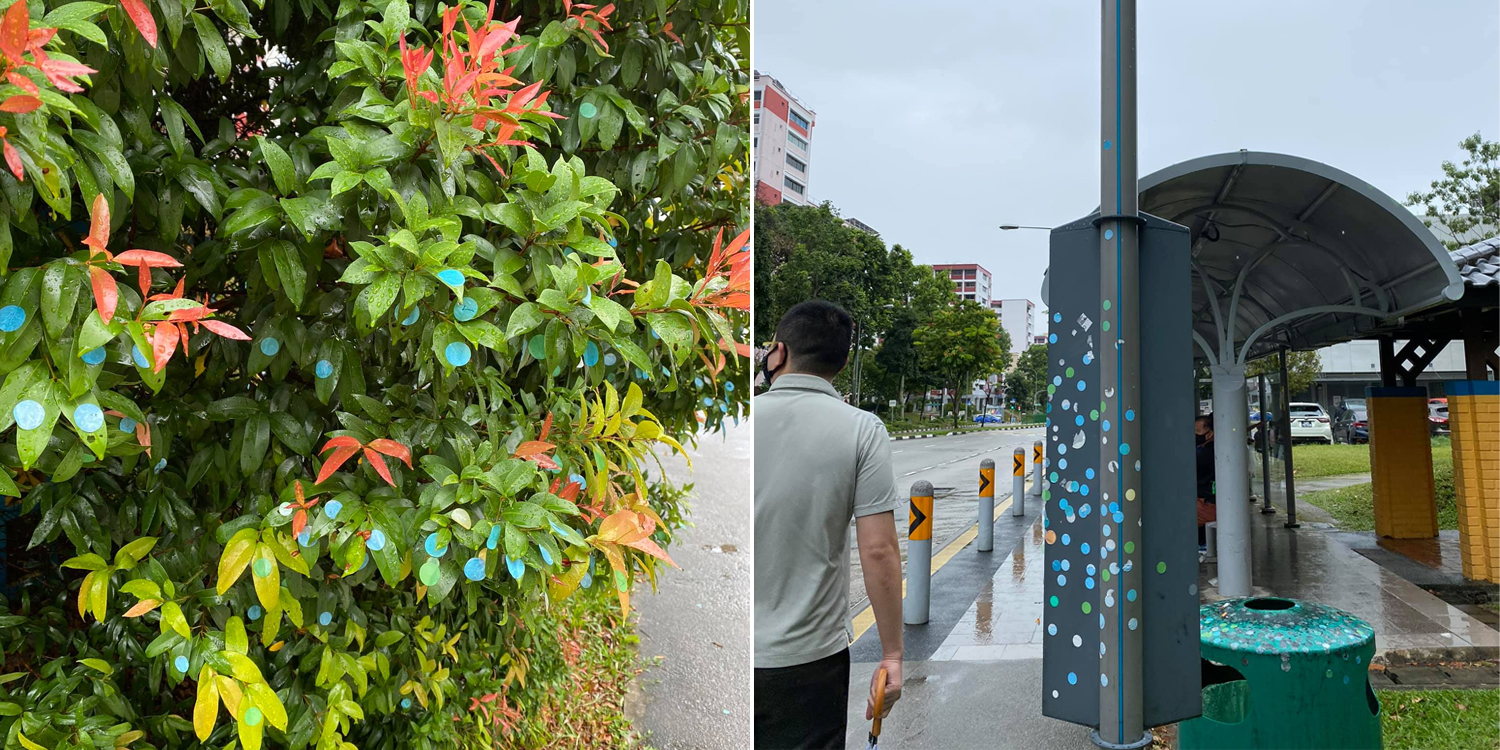 The plants nearby weren't spared either.

Venues in Singapore have been required to implement safety measures as the world continues to grapple with the Covid-19 virus.

One of the most common precautions are temperature checks that ensure visitors are not having a fever. 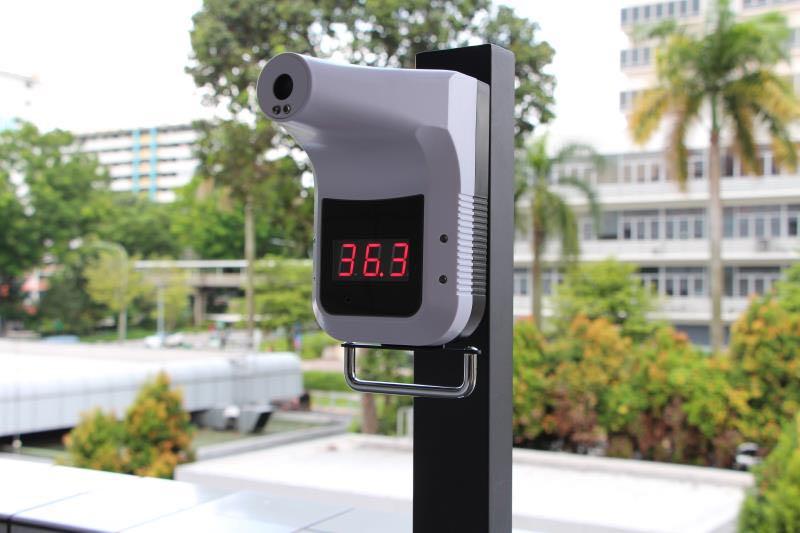 Typically, those who have been deemed ‘cleared’ will be given a sticker that they can stick on their clothes.

So what happens to these stickers when they are no longer of use?

Well for some Choa Chu Kang (CCK) Polyclinic visitors, they have apparently chosen to stick their stickers at the nearby bus stop. The bus stop sign and bin were covered with so many stickers that they were even visible on Google Maps.

On Friday (28 Jan), a netizen shared pictures of the CCK Polyclinic bus stop sign and adjacent bin on the COMPLAINT SINGAPORE Facebook group. 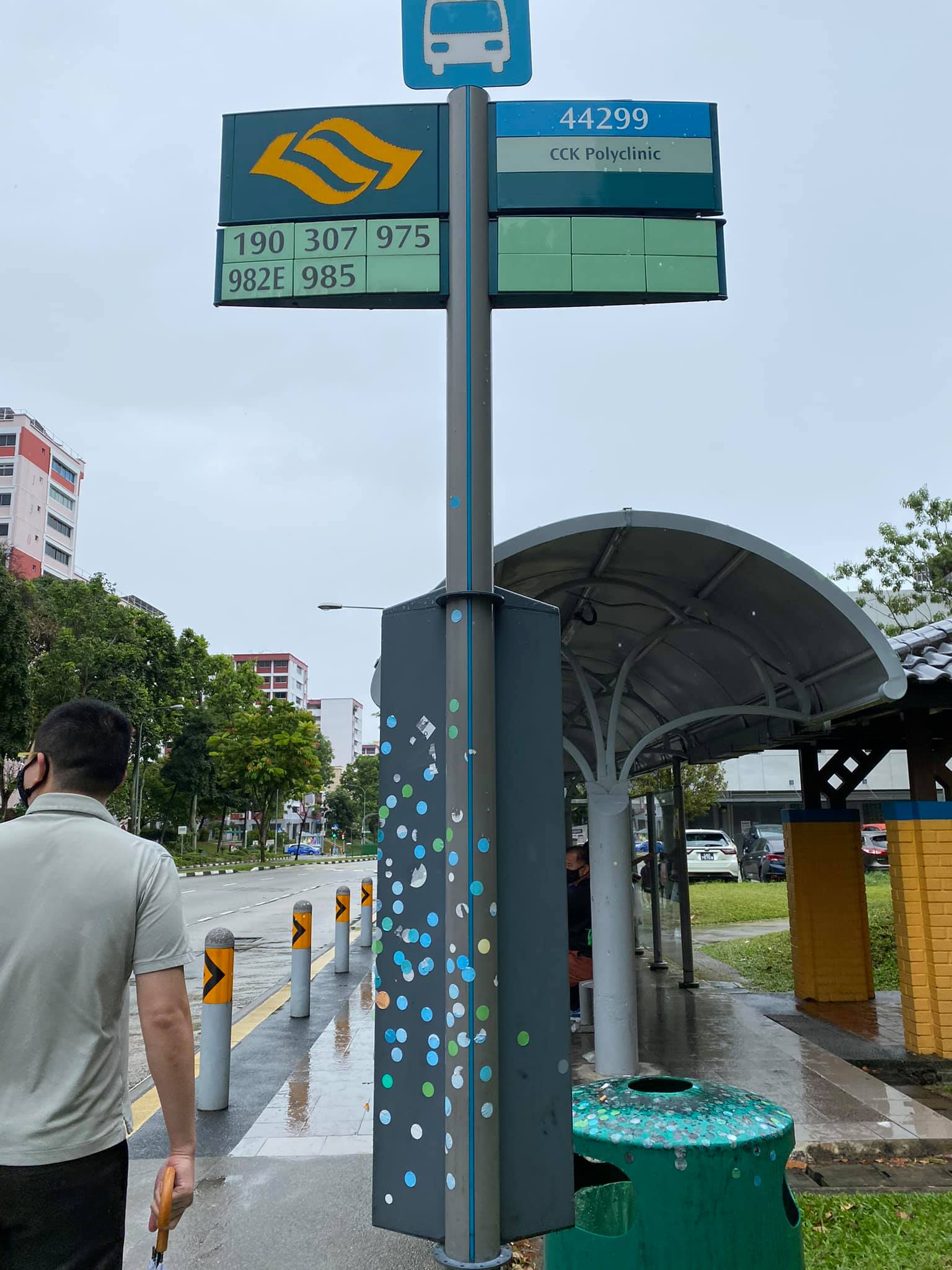 Originally a grey metal pole, the sign now has white, blue, and green ‘polka dots’ stuck on it.

The same circular stickers were also found on the leaves of a nearby plant. 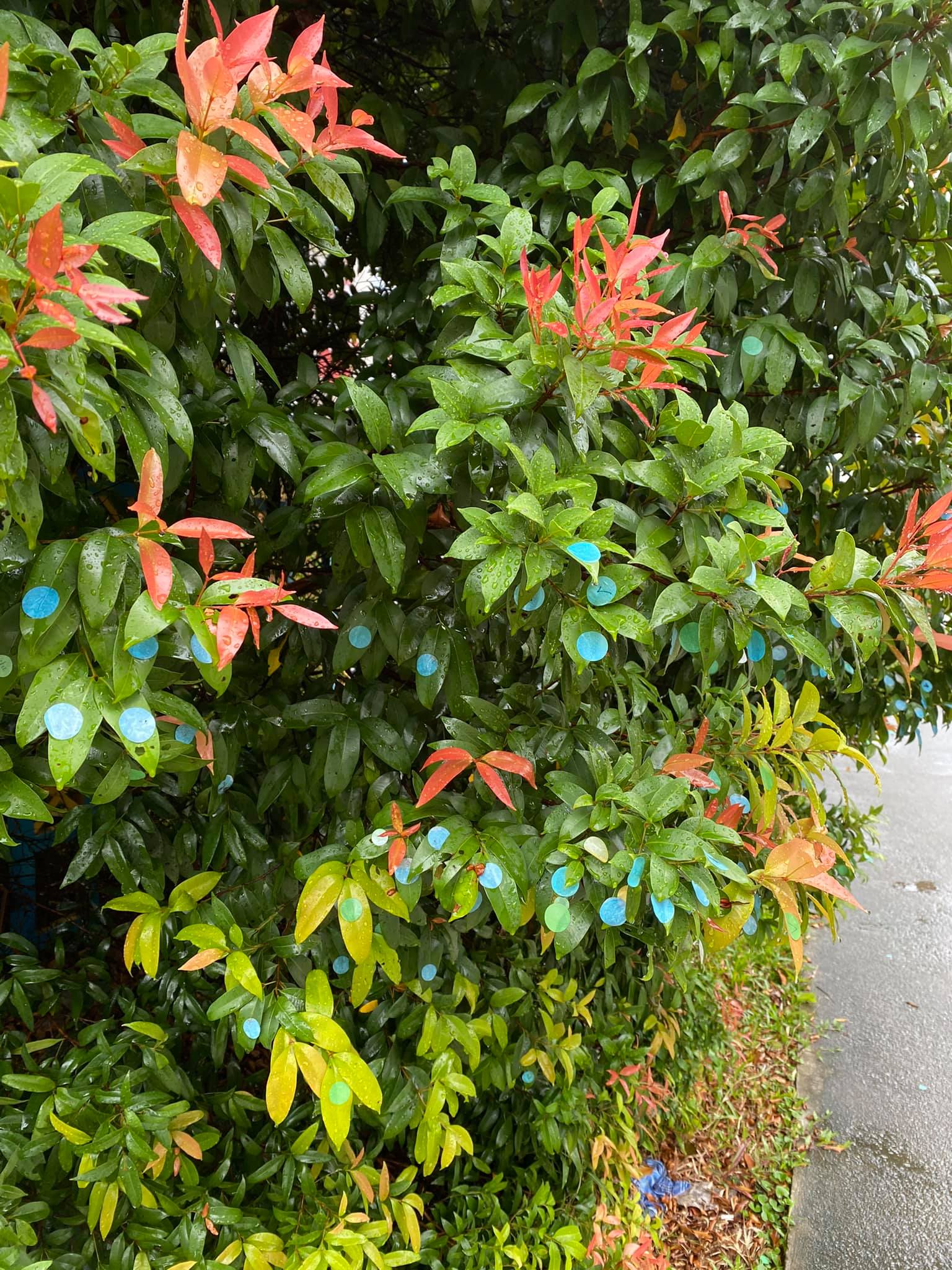 As of 5.50pm on Thursday (28 Jan), the stickers can still be found around the vicinity of the polyclinic. The vandalism was arguably most severe on the bin at the polyclinic’s bus stop. 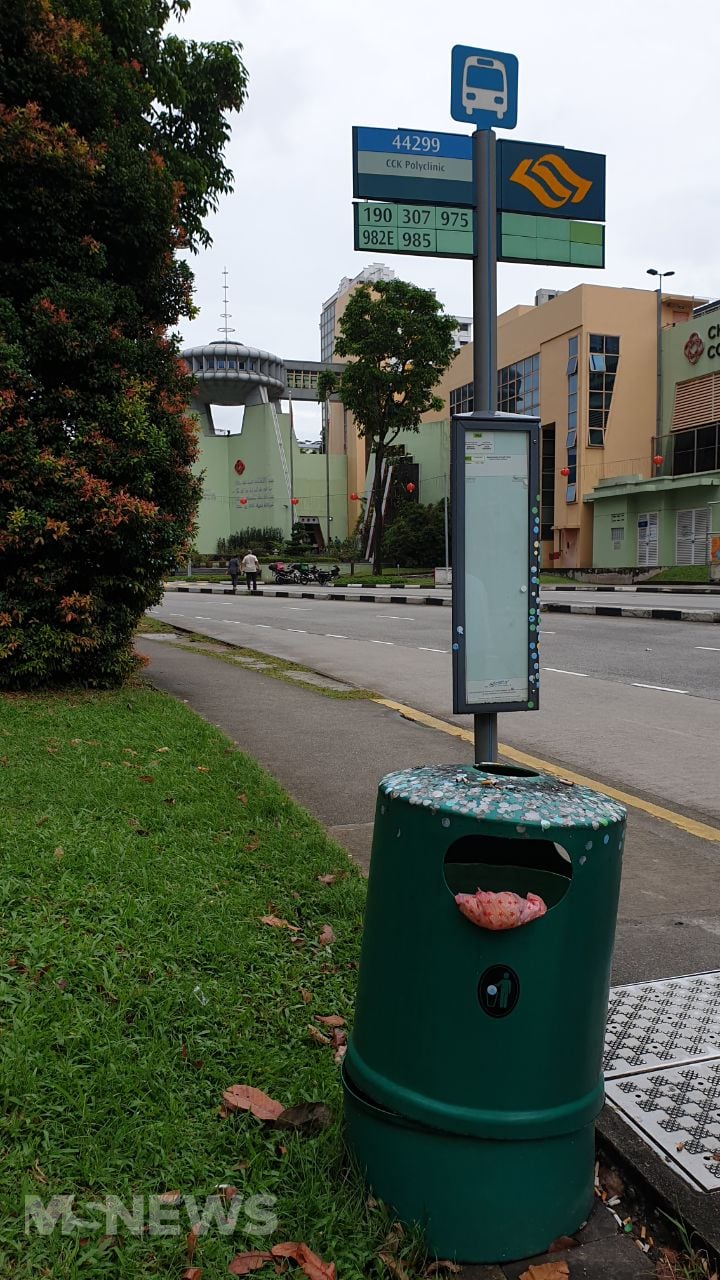 Visible on Google Maps too

Images on Google Maps aren’t exactly known for being detailed, so if something’s visible on their satellite photos, it must be fairly striking.

Without making it too obvious, guess what we saw on Google Maps when we decided to pay CCK a virtual visit? Yup that’s right, stickers on the bus stop post and nearby plant.

The images around the area were reportedly taken in Sep 2020 during the Covid-19 pandemic.

Similar scenes can also be seen at the opposite bus stop, though the vandalism appears less severe. 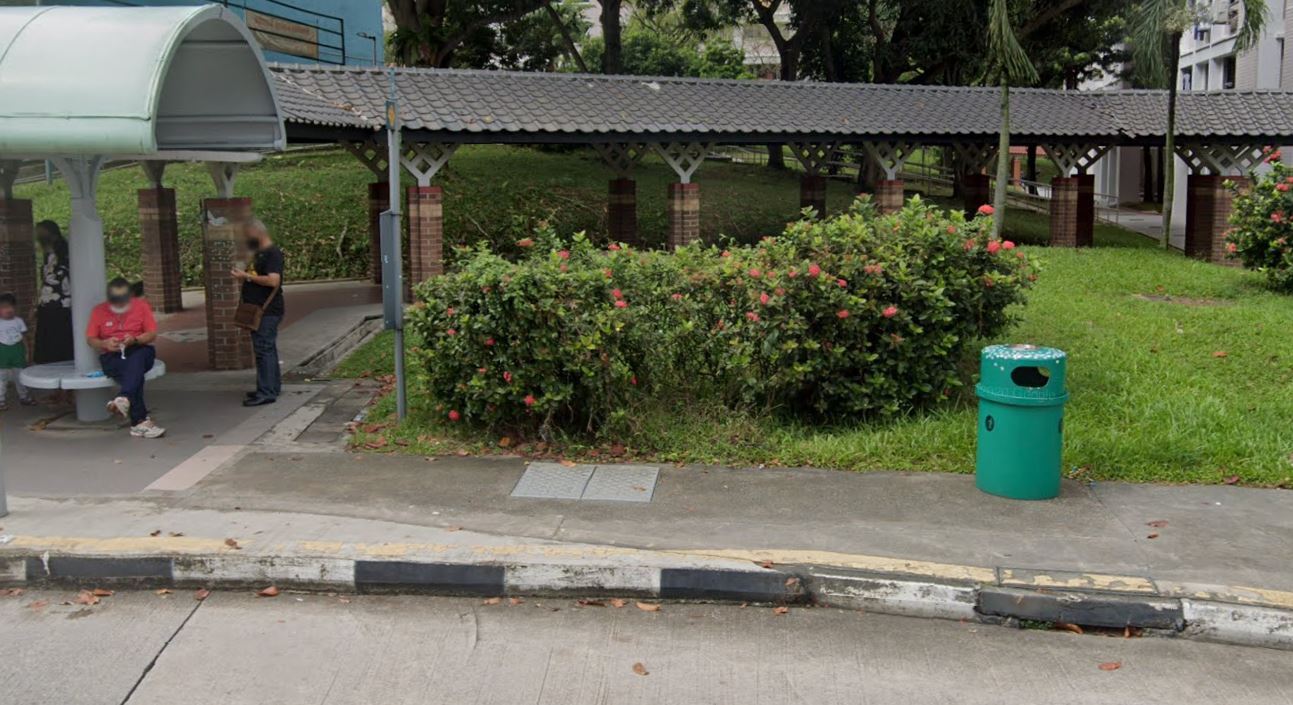 Same predicament outside other polyclinics

It appears bus stops near other polyclinics are also facing the same predicament.

Similar stickers were seen at a traffic light located across Yishun Polyclinic just 2 months ago. 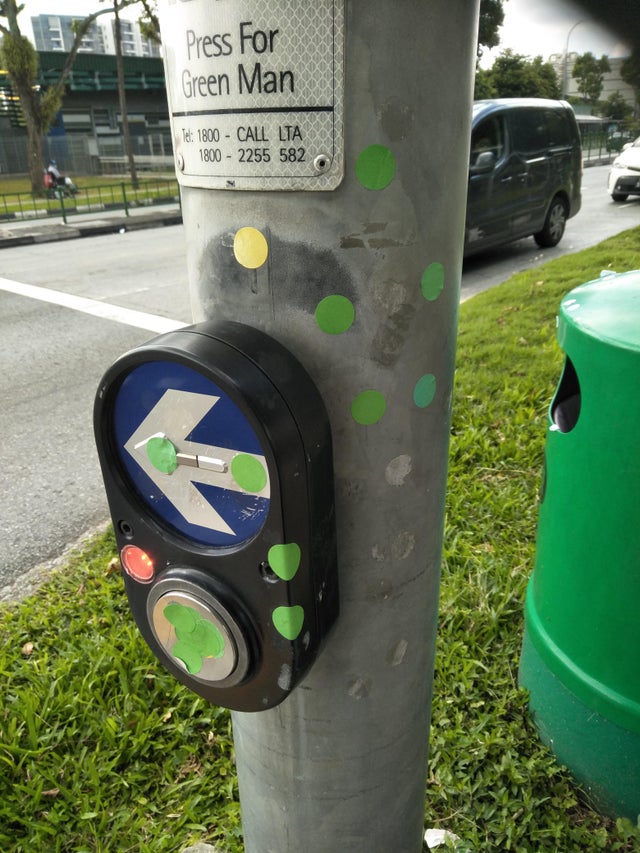 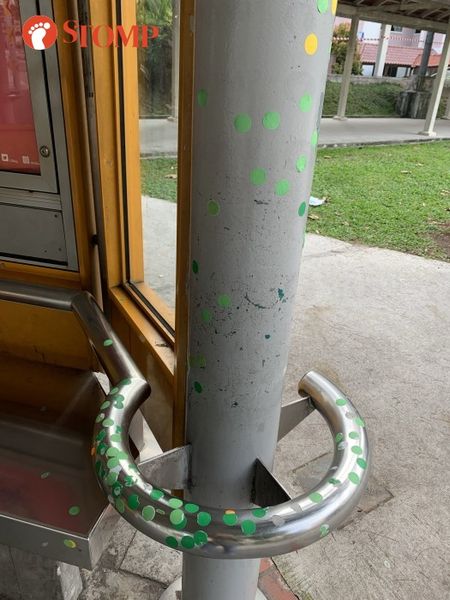 Though the stickers do add a colourful touch to the structures and plants, we hope polyclinic visitors would refrain from doing so.

After all, it doesn’t take much effort to dispose of the stickers inside a bin, which would save cleaners considerable time and effort.

We’re in a time when hygiene is of utmost importance, so let’s dispose of any unwanted things responsibly.