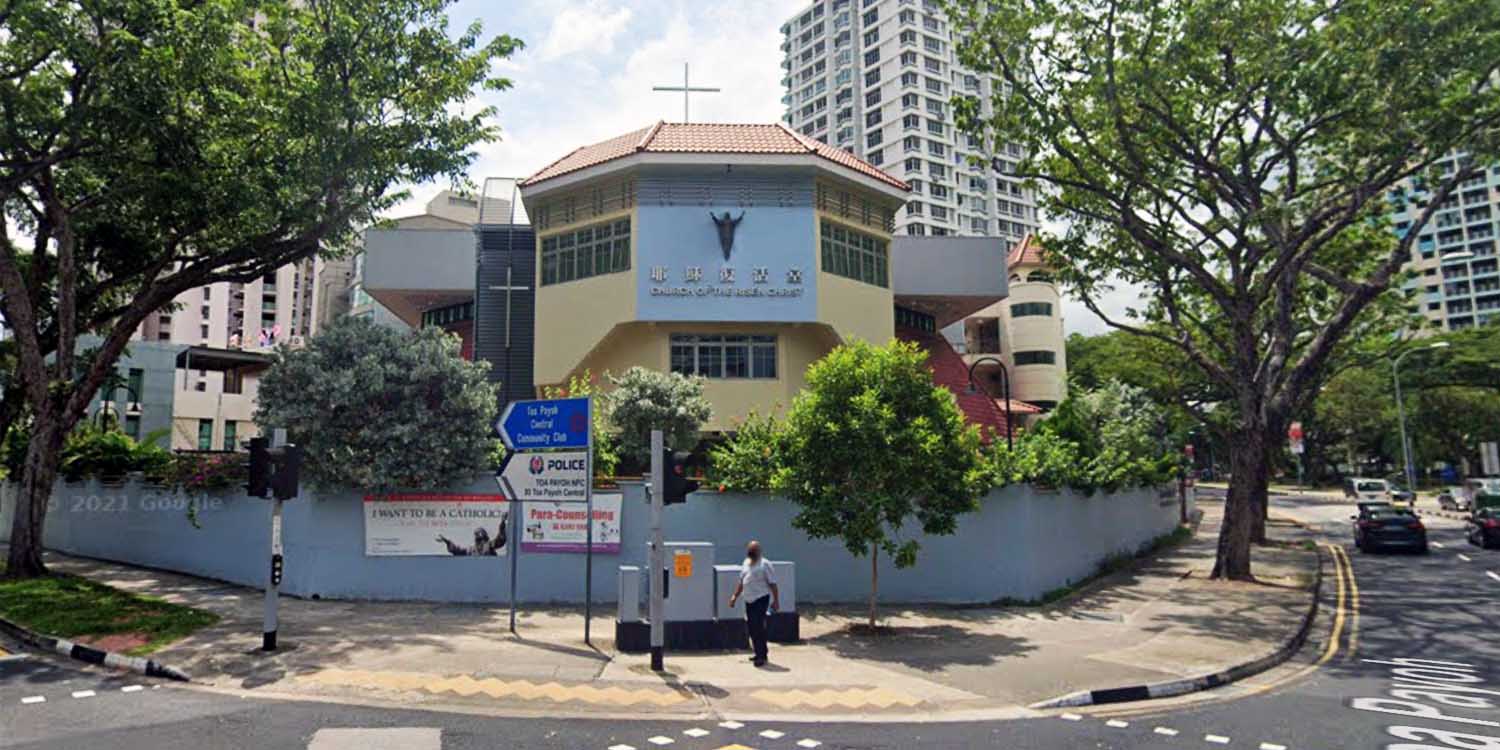 Speculations on ways to treat and prevent Covid-19 are rife and if one is not careful, they might be led astray by inaccurate information.

That’s what happened to 65-year-old Mrs Koh who took Ivermectin and was hospitalised.

She was allegedly persuaded by her church friends that mRNA vaccines were against their religion and that Ivermectin will prevent Covid-19.

Church of the Risen Christ has since issued a statement saying they’re saddened by the incident and urged congregants to only take safety measures “officially prescribed” by the authorities.

On Monday (4 Oct), Church of the Risen Christ put out a Facebook post addressing their congregation about the incident involving Mrs Koh. 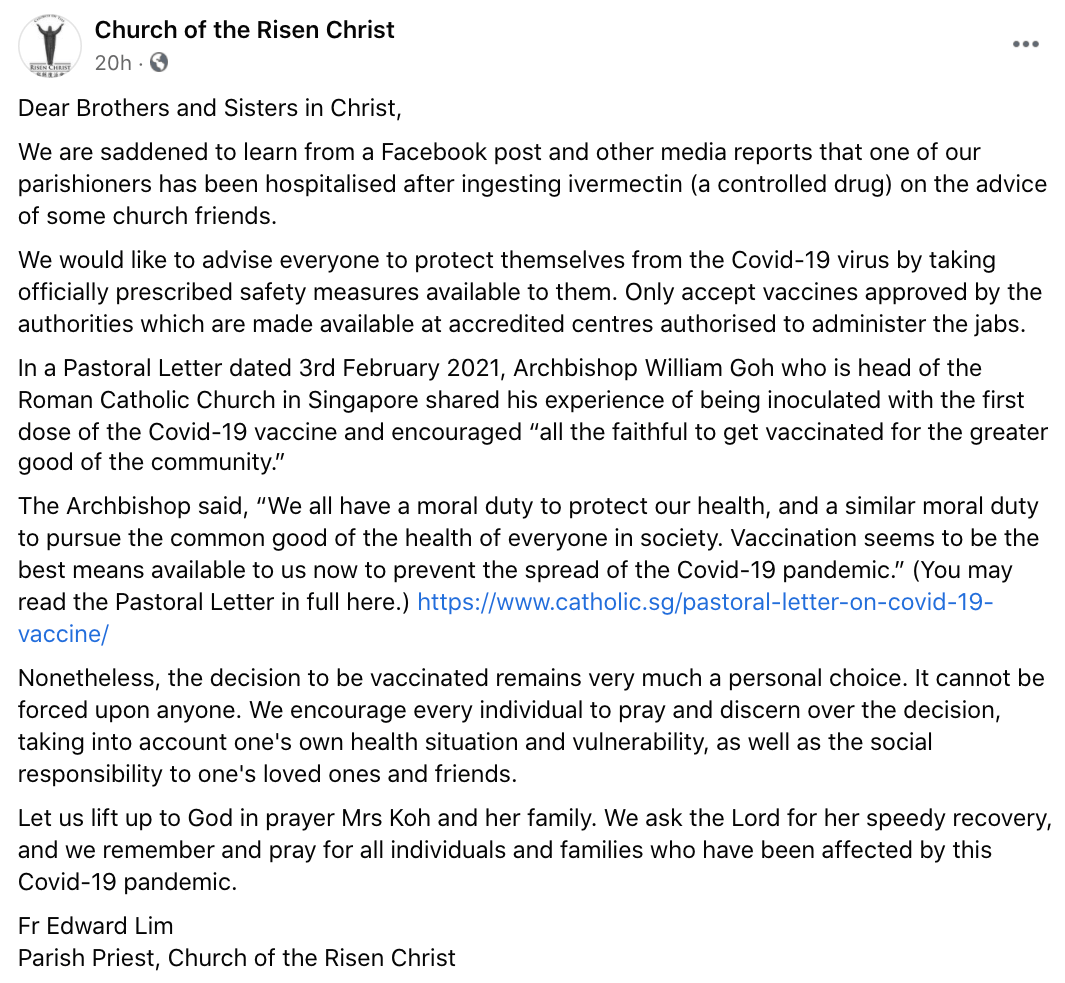 The church’s Parish Priest Edward Lim wrote that they are saddened to learn the congregant has been hospitalised after ingesting Ivermectin on the advice of her church friends.

He continued that the church advises everyone to protect themselves against Covid-19 by following safety measures that are officially prescribed, presumably by the authorities.

The Parish Priest also said that worshippers should only accept vaccines that are approved by the authorities and administered at accredited centres.

Encouraged individuals to get vaccinated

Parish Priest Edward Lim then cited a pastoral letter written in February by the head of the Roman Catholic Church in Singapore.

The letter by Archbishop William Goh encouraged believers to get vaccinated “for the greater good of the community”.

In the letter, the Archbishop also said they have a moral duty to protect their health and that of others in the society.

He added that vaccinations are the best means currently available to prevent the spread of Covid-19.

He says the Church of the Risen Christ encourages individuals to pray and discern over the decision based on their own health situation.

But he reminds them to also take into account the social responsibility they have to their loved ones and friends.

The Priest concluded by asking the congregation to pray for Mrs Koh as well as everyone affected by the pandemic.

According to The Straits Times (ST), Mrs Koh had taken 4 tablets, each containing 3mg of Ivermectin, over 2 days.

She then fell “violently ill” and had symptoms such as fever, inflammation on her joints, and vomiting after eating.

The 65-year-old was then hospitalised at Sengkang General Hospital on 1 Oct and remains so today. 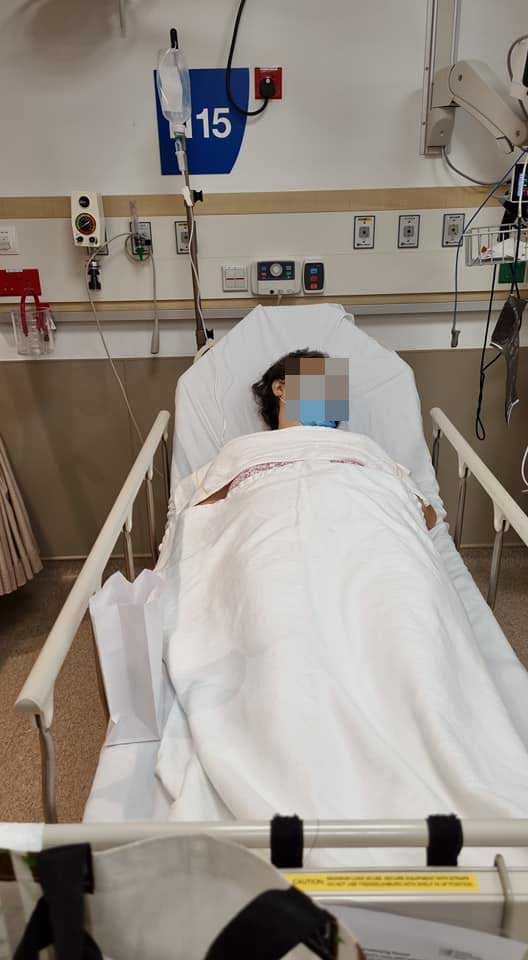 Though in a stable condition, she has a history of diabetes and high blood pressure that leaves her vulnerable to severe illness.

Mrs Koh’s daughter had reportedly tried her best to persuade her mum to get vaccinated, causing a strain in their relationship.

Her daughter later found out that she had been taking Ivermectin pills.

She had taken them to protect herself from the virus, believing that the vaccine was “useless”.

Ivermectin is not purchasable over the counter. It is typically prescribed by doctors to treat head lice and other infestations.

While Singapore experiences a surge in Covid-19 cases mounting fears about the virus, it is important to listen to the advice from the authorities and medical experts.

So do remember to stay informed with credible sources and not to self-medicate.