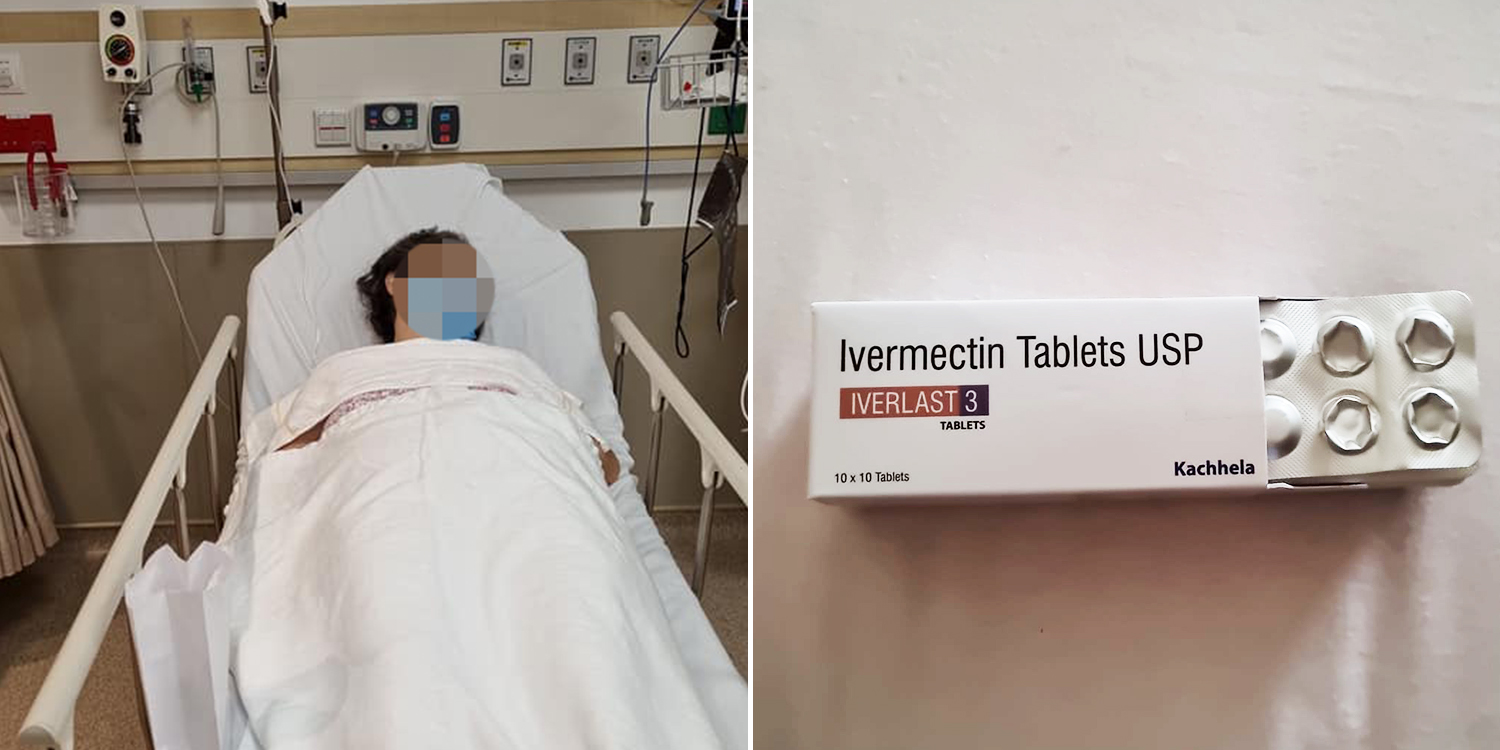 Woman Admitted To Hospital After Taking Ivermectin To Treat Covid-19

However, despite prior warnings from health ministries, including Singapore’s Health Sciences Authority (HSA), a handful of people still believe the drug effectively tackles Covid-19.

Unfortunately, a Singaporean woman who took Ivermectin recently landed in the hospital due to the side effects.

According to her daughter’s Facebook post, the woman was convinced by 2 members of a Toa Payoh church who advised her not to take mRNA Covid-19 vaccines as it was against their religion. 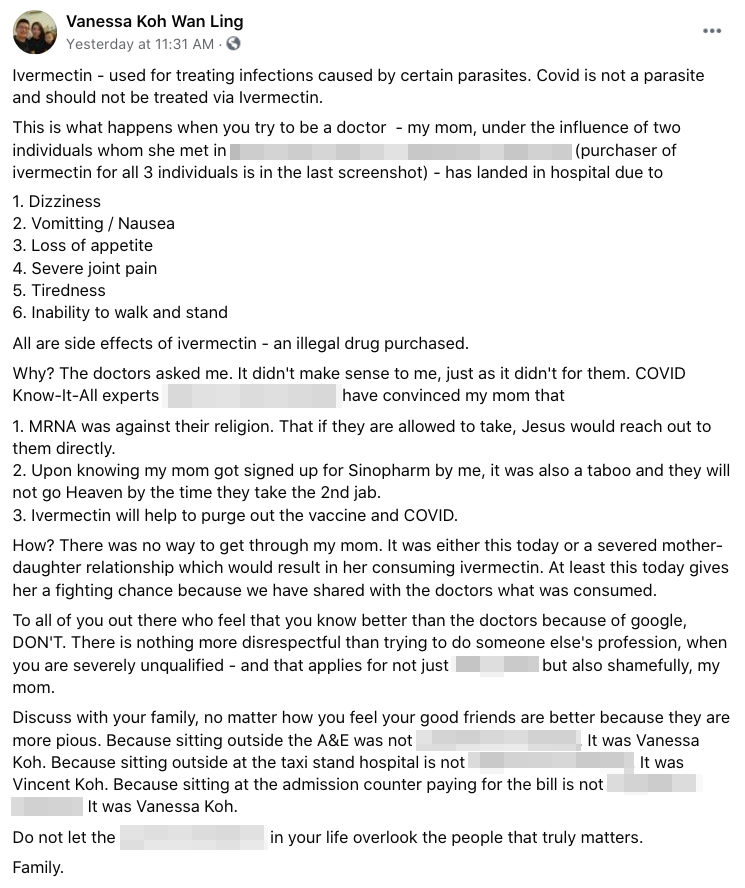 The daughter wanted to raise awareness of the situation through her post and prevent people from taking the drug to treat Covid-19.

Churchgoers say mRNA Covid-19 vaccinations are against their religion

On Sunday (3 Oct), Vanessa Koh shared that her mother was hospitalised after taking Ivermectin to treat Covid-19.

Apparently, her mother was convinced by 2 individuals she met at a church that mRNA was against their religion.

According to the messages between her mother and the individuals, it seemed to have started in July this year.

After complaining about being tired of the pandemic, her mother received a message saying that mRNA vaccines are the work of Satan. 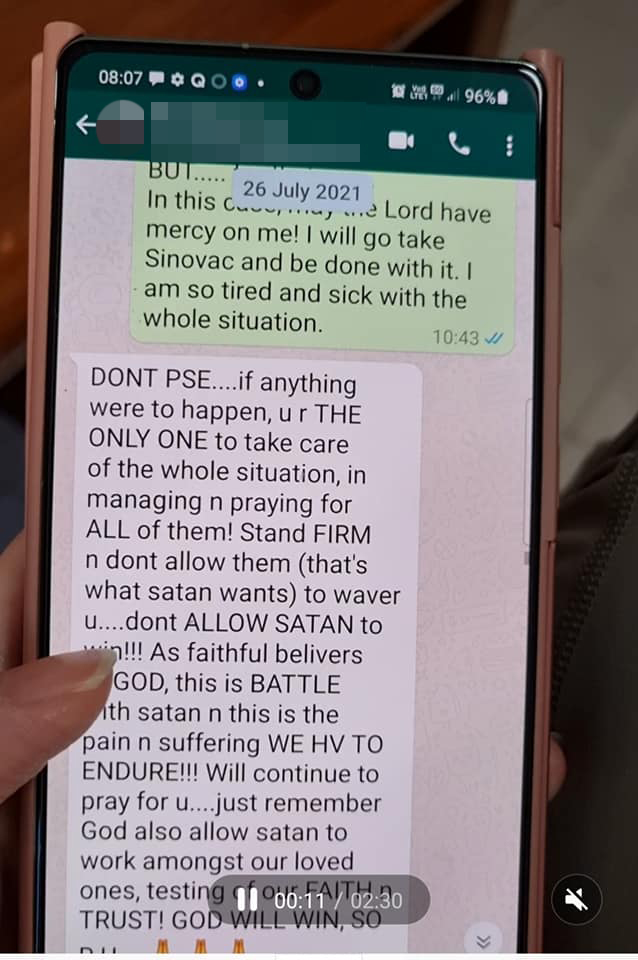 The same churchgoer then messaged her mother, saying Jesus himself would reach out to them directly if they were allowed to take such vaccinations. The 2 churchgoers also mentioned that only Jesus could persuade them to take the vaccination. 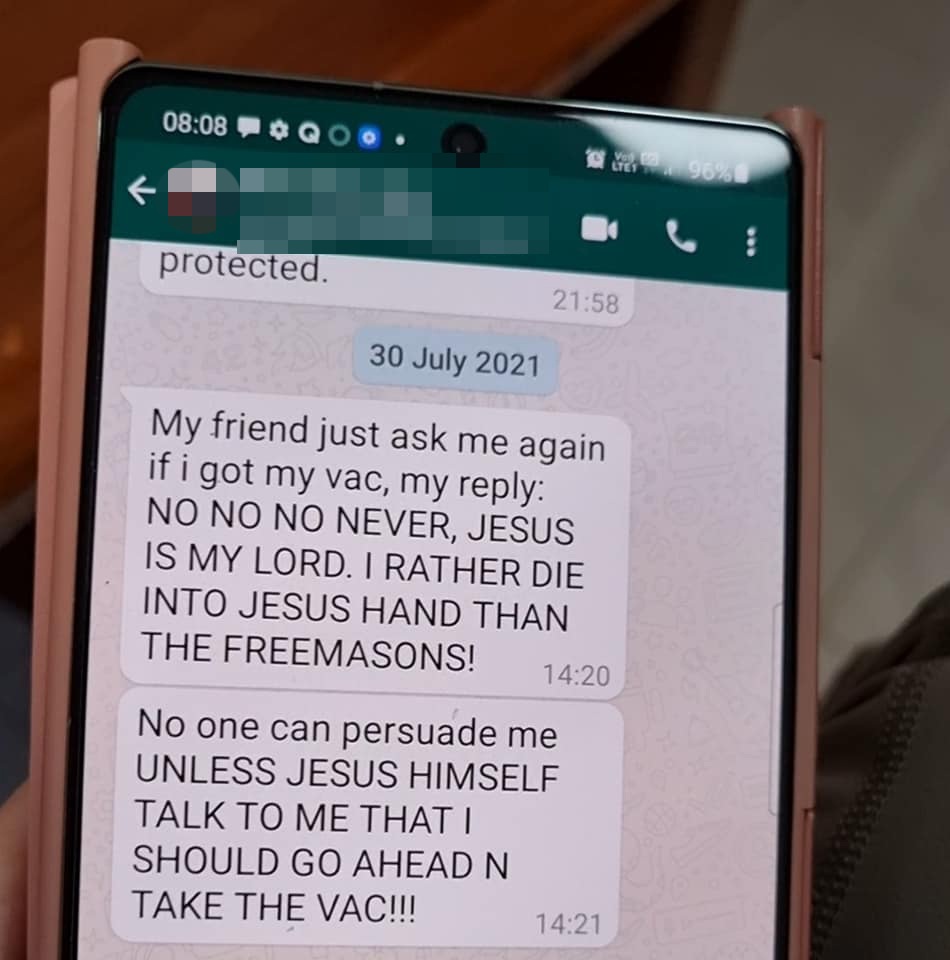 More messages allude to the churchgoers insisting that Vanessa’s mother take Sinovac or Sinopharm vaccines as they weren’t mRNA-based. 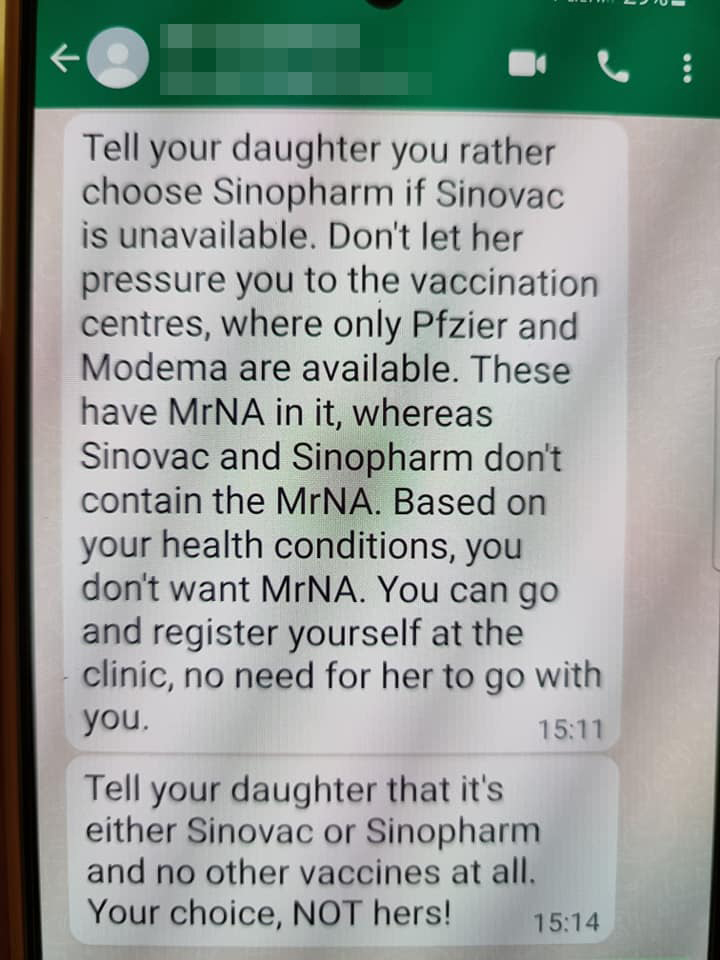 The last message urges the mother to tell Vanessa,

Tell your daughter that it’s either Sinovac or Sinopharm and no other vaccines at all. Your choice, NOT hers!

Eventually, it seems that the woman was convinced that Ivermectin was the way to go to protect herself from Covid-19.

On 12 Aug, the woman received messages from another individual who could get Ivermectin for a low price. However, the woman was also advised to not tell anyone about it. About 18 days later, the woman received the Ivermectin she had ordered. She also received guidelines on the drug’s dosage based on her body weight. 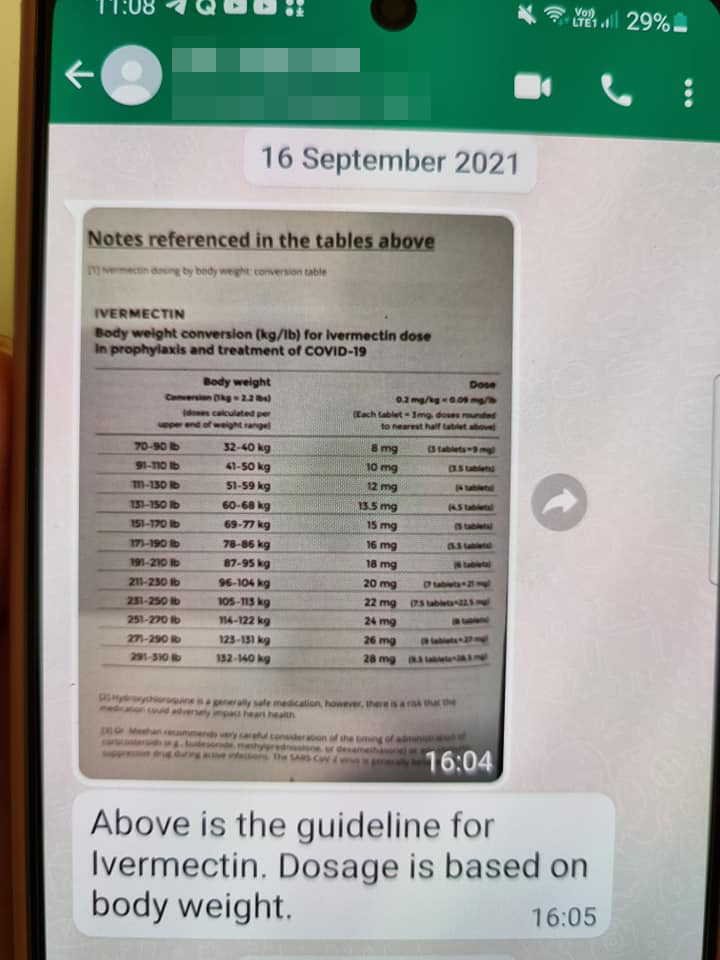 Unfortunately, the woman experienced various symptoms, which are side effects of consuming the drugs:

In the end, she was rushed to the hospital. 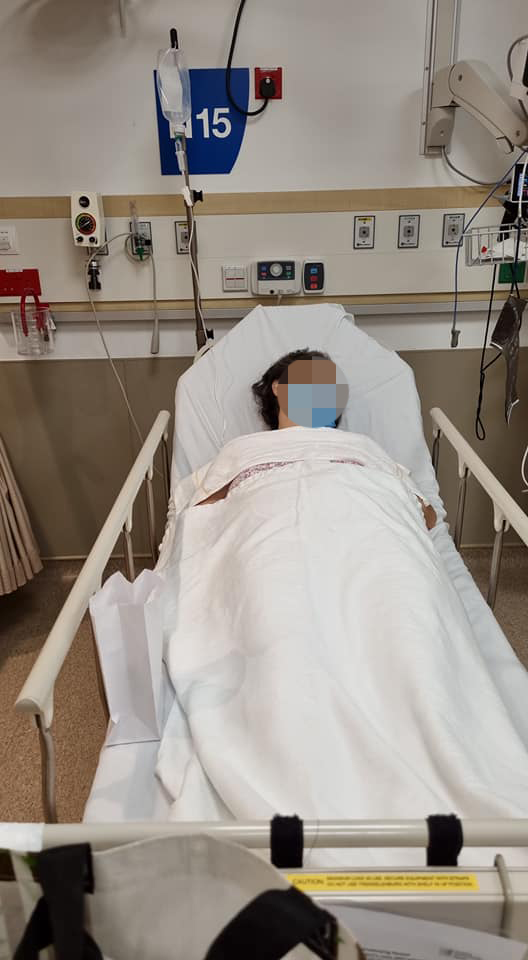 The doctors were puzzled as to why the woman was convinced to take the drugs.

The woman’s daughter decided to spread awareness about her mother’s situation as she did not want anyone to go through the same thing.

She urged all members of the public to listen to medical experts instead of doing their own research on the web.

Vanessa stressed that individuals should discuss with family members instead of listening to advice from their friends who wouldn’t be there if anything happened.

Furthermore, she felt that such behaviour from unqualified individuals is disrespectful towards medical professionals who do their best to fight the virus.

Upon queries from MS News, Vanessa revealed that the 2 churchgoers still send her mother messages and call 3 times a day. Vanessa hopes they will stop calling and introducing such a “wayward lifestyle” to her mother.

Her Facebook post was an attempt to call them out on their behaviour as she felt it was too much.

MS News has reached out to the church for comments and will update the article accordingly when they get back.

Speedy recovery to the woman

Though many have been experiencing pandemic fatigue, they should not listen to advice from non-medical experts as it could cause more harm.

We hope the woman will have a speedy recovery so that she may be discharged and reunite with her loved ones.

As for the rest of us, do stay informed with credible news sources and health authorities instead of attempting to self-medicate.