Girl Catches Clarke Quay Flasher On Camera, Police Now On The Case Thanks To Her Videos 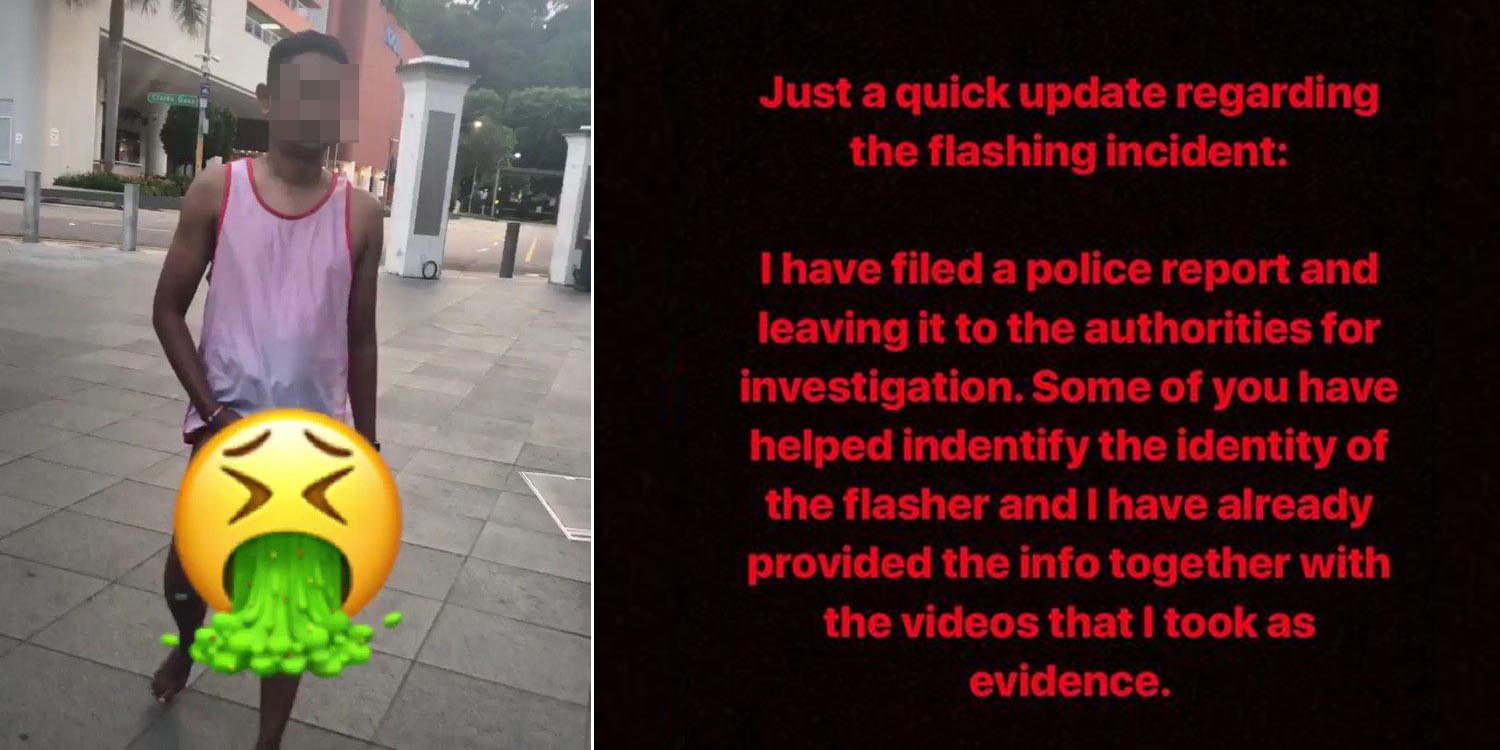 She caught the entire process on camera.

Hearing about sexual harassment is one thing. Being a victim of one, and seeing someone’s ‘business’ right in your face is a whole other story.

As evidenced by a Singaporean, Ms Jewel Koh, who shared her harrowing experience in a series of Instagram stories. 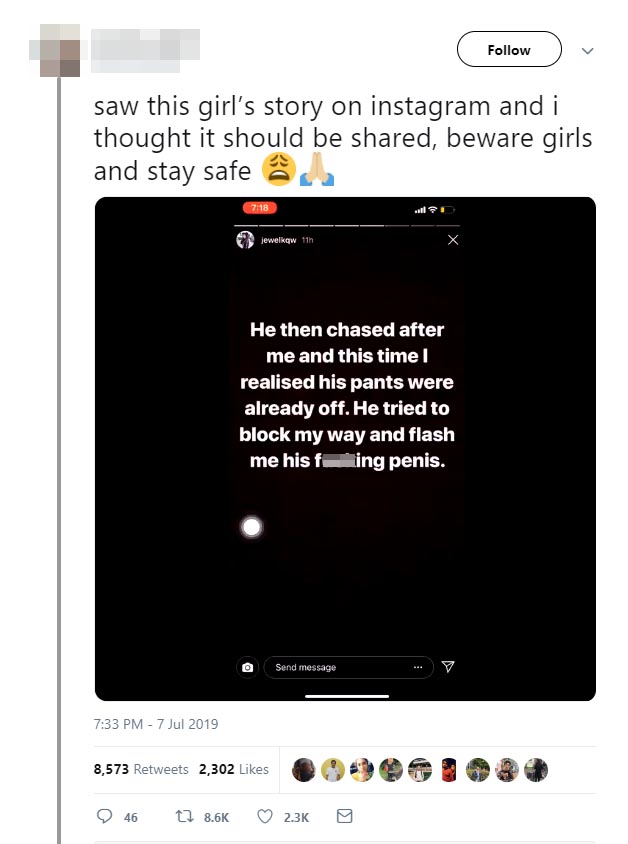 Ms Koh posted on Sunday (7 Jul) that she was heading home at 7am in Clarke Quay when she saw a man following her while stroking his penis openly.

Terrified, she managed to record scenes of the disturbing episode and posted it all on Instagram.

A Twitter user picked up her stories and reshared them to spread awareness. The tweet has amassed over 8,500 retweets at the time of writing.

Ms Koh recounted the tale of the Clarke Quay flasher when she was heading home early in the morning after having supper with friends.

She wanted to leave first so she made her way to Liang Court to hail a cab alone.

That was when a man suddenly came up to her and grabbed her.

Ms Koh initially thought he was a beggar, so she exclaimed “NO!” and swatted his hands away.

Man followed her & stroked his penis

Unfortunately, Ms Koh’s ordeal had just begun. As she walked away hastily, Ms Koh realised that the man was following her while “stroking his penis”.

She told MS News, “I shouted at him to stop following me, but he didn’t listen. Instead, he started chasing after me.”

The man, Ms Koh added, had caught up to her and took off his shorts. She claimed that he kept blocking her way and continued stroking his private parts. She recalled,

I thought he was going to attack me already when his pants came off. I screamed for help, but no one came.

Feeling helpless, Ms Koh shared with MS News that she quickly took out her phone to record the man.

At least if anything bad happened to me, I have evidence.

Be warned, for the following picture may be disturbing for some. 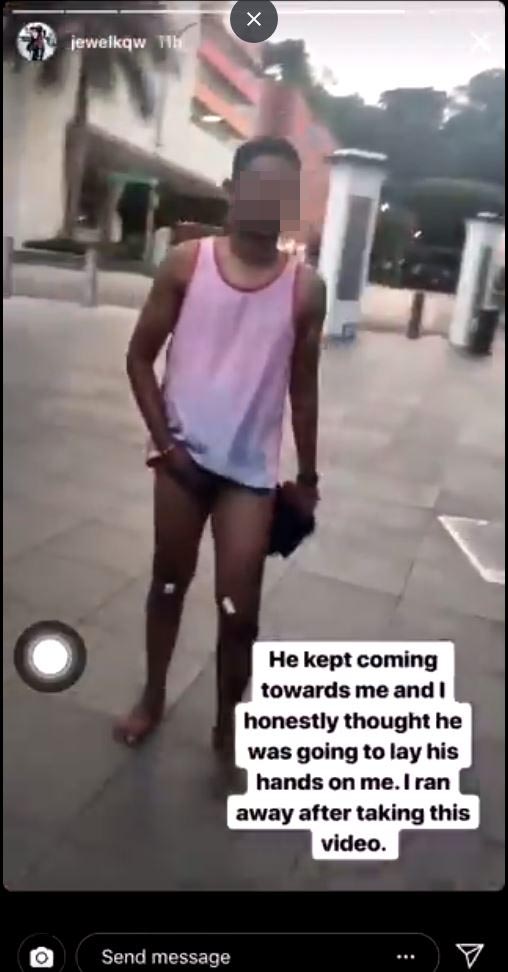 Ms Koh shouted at him a few more times, which seemed to have scared him off a bit. That gave her the opportunity to run away.

You can view her Instagram stories in full here.

Urging ladies to be vigilant

After alerting her social media following about the incident, Ms Koh urged ladies who frequent Clarke Quay to beware of the man, dressed in a pink singlet, below. She posted her stories in to remind everyone “to be wary of our surroundings” even while walking in familiar areas.

On Monday (8 Jul) morning, Ms Koh updated that she has lodged a police report about the incident, using her videos as evidence.

They told me they’re currently investigating, although some people have helped identify the man.

Ms Koh informs us that she’s currently still slightly traumatised, but all is good.

Netizens quickly sympathised with Ms Koh’s plight. Many expressed disgust at the man’s antics, like this Twitter user. 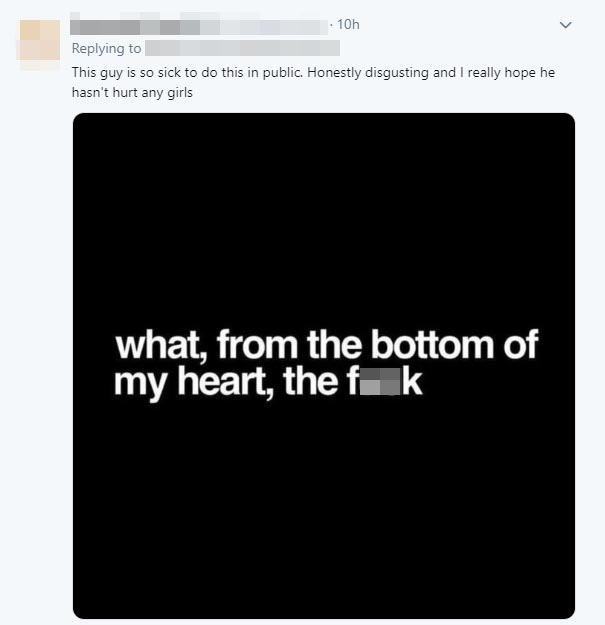 This user couldn’t believe that the perpetrator had the audacity to carry out something so brazen in public and in broad daylight.

We’re glad Ms Koh managed to survive this ordeal, but we must strongly condemn such behaviour in our society. Kudos to her brave efforts to share her story to spread awareness about similar cases.

Thankfully, she managed to keep her cool and escape in time, and her safety is what truly matters. We do hope that the police will take swift action and bring the man to justice.

Meanwhile, stay safe out there, ladies.