Hide your wife, hide your kids because crime rates are on the rise in Singapore

Police are warning residents against the rising crime rates. Crime rates in Singapore have climbed by 4 per cent last year to 33,608 cases from 32,315 cases in 2014. The rise is mainly because of online crimes, according to the police.

Last year, 383 women fell prey to Internet romance scams, forking out $12 million in total. Women are the main victims of Internet love scams in Singapore. They were cheated by culprits who mostly claim to be from the United Kingdom and would befriend them before cheating them of their money. The largest amount cheated in the love scams was about S$528,000.

A website set up by the National Crime Prevention Council shows the stories of victims who were scammed of their money. While women were falling for love scams, 1,203 men were victims of online sex scams. Men were cheated in total $2.9 million over online sex scams, with the largest amount at S$74,000. The culprits would use mobile messaging platforms to ask their male victims to buy gift cards or credits in exchange meet-ups, sex or escort services.

One man shared an anecdote about falling victim to a sex scam: 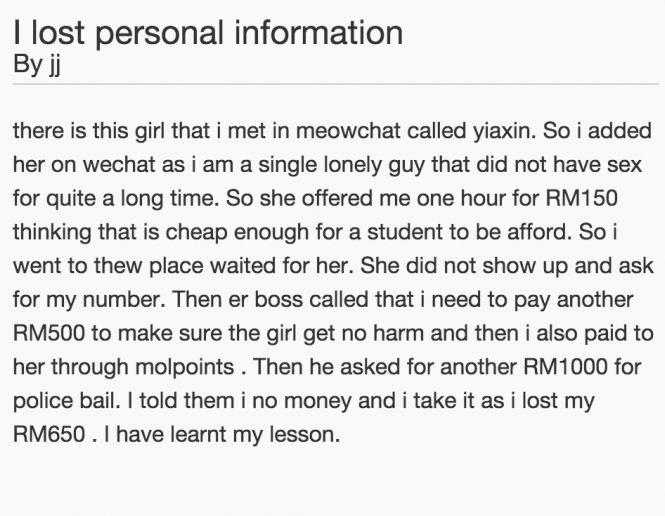 The bulk of online commercial crimes originated overseas. The police said that public education is the way to go. They will also take tough action against residents who allow their bank accounts to be used for such transactions.