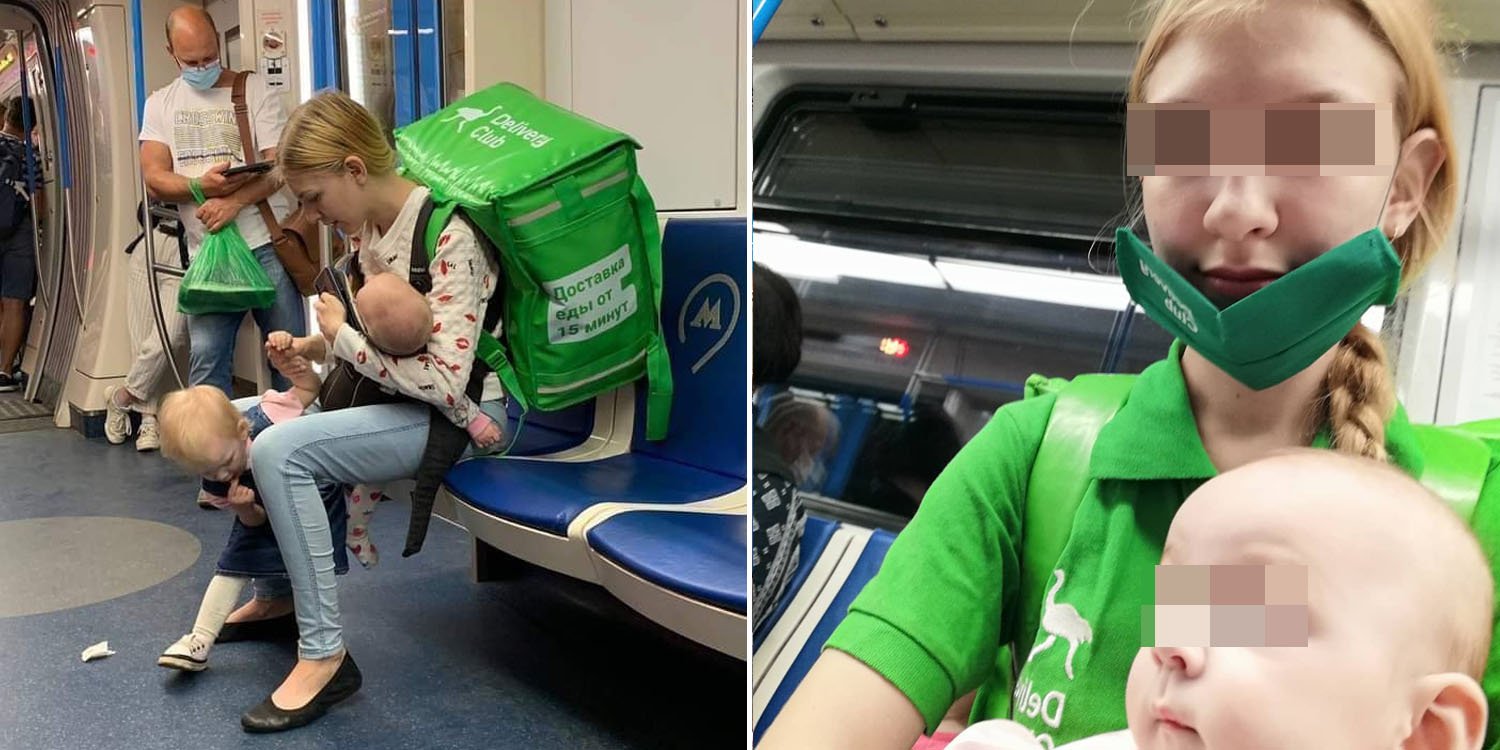 Delivery Rider In Russia Carries Her Kids On The Job, Picture Goes Viral In A Day

Being a mother is not easy, especially when you have to juggle between work and taking care of your kids.

Not every woman gets to stay home 24/7, which means when you leave for work, you’ll have to ensure that the lil’ ones are in good hands.

For one young mother in Russia, it looks like she may have no choice but to take her kids along with her when she’s busy earning a living.

The catch? She’s a delivery rider, for a company that looks like the GrabFood of Russia. Someone saw her in the subway with her 2 young ones, and took a photo. 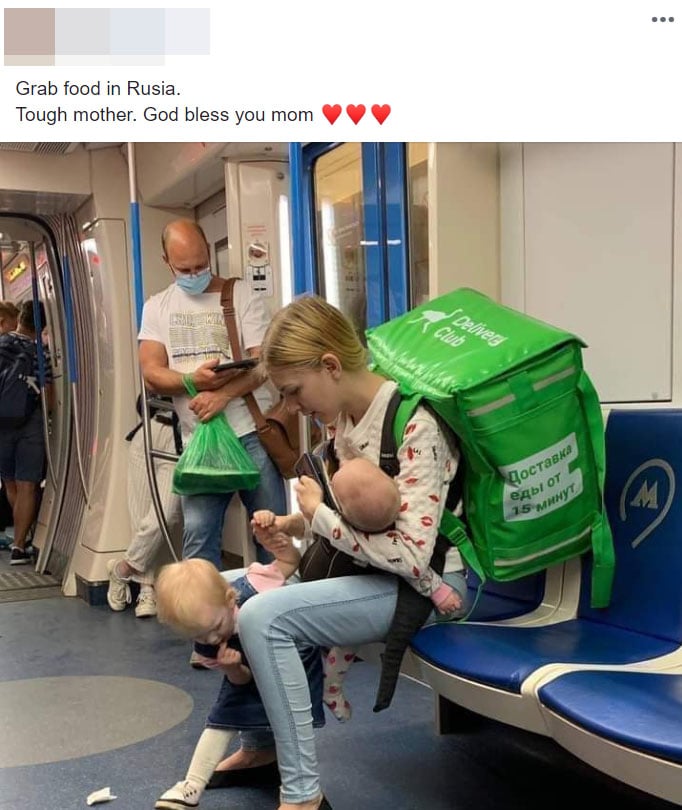 Delivery rider in Russia takes 2 kids along with her

It’s not easy lugging around a heavy delivery bag as you travel across the city to send meals to customers.

For this woman, she had the mammoth task of doing that while carrying her kids around. 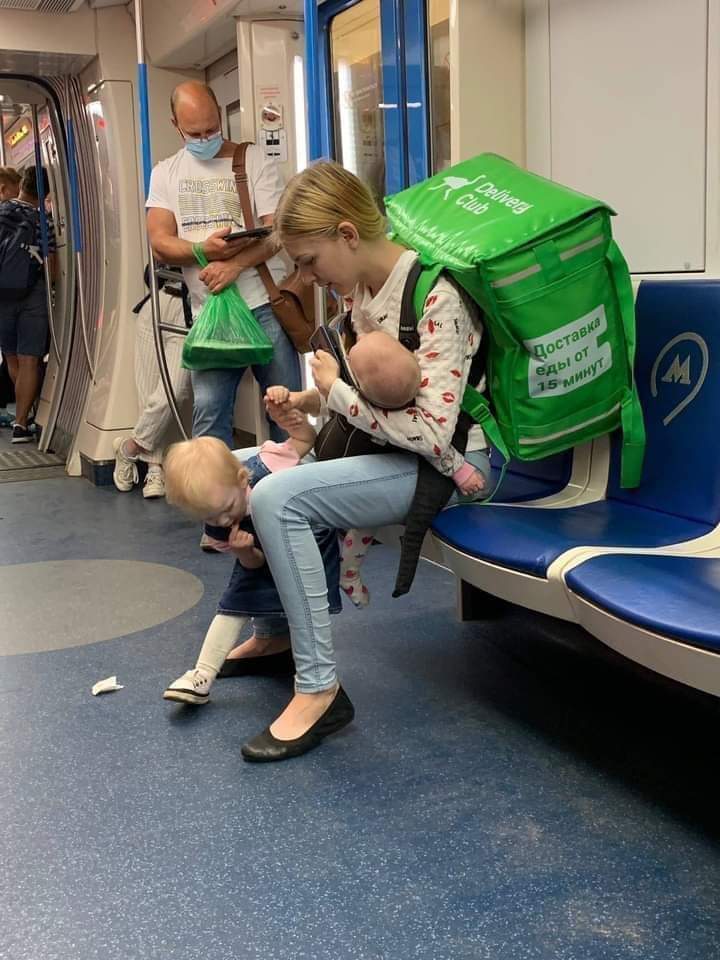 In the picture, it looks like she’s trying to hold onto her toddler using her right hand while carrying her baby in her left arm.

A picture is worth a thousand words. And even though we don’t know the full story behind it, we’re sure all mothers can relate with this single moment of the woman’s struggle.

Working mum on the hunt for alternatives 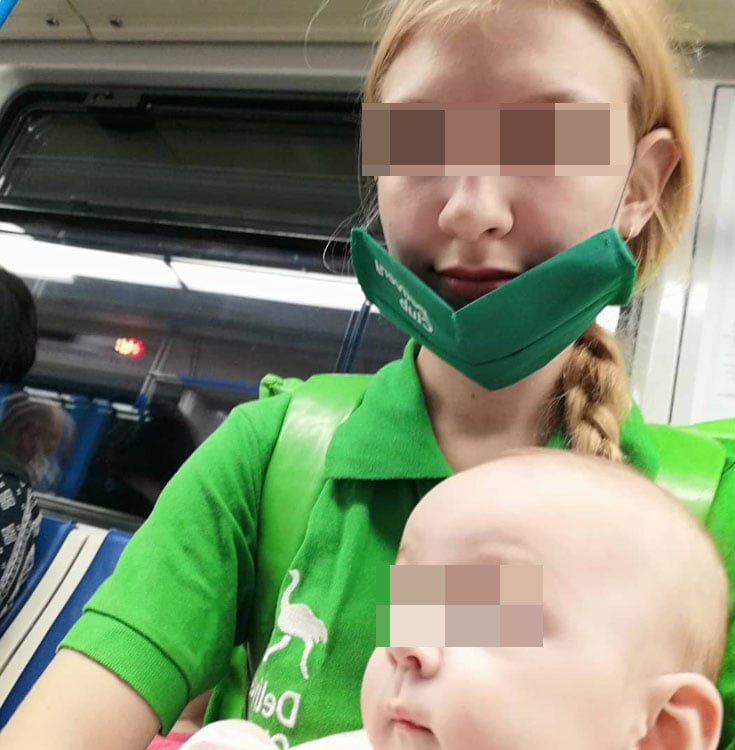 In the accompanying caption in Russian, she asks,

Does anyone know any options for remote work with daily payments? I can go to clean apartments for you too. The main condition is I can go with my daughters, that’s it.

Husband has no job

According to a Russian news site, the 19-year-old woman is often sighted walking around the city in a delivery uniform while taking her 2 daughters with her.

So touched were many by her situation, that even Russian journalists had reached out to her to hear her story.

In an interview, she mentioned that her husband doesn’t work, and that she no longer speaks with her mother due to objections over her marriage at a young age.

I don’t have much allowance, so I choose to go to work with my daughter.

She opted for a delivery job as it granted her enough flexibility to continue caring for her kids.

Respect & sympathy for the working mum

The woman’s photo has garnered a lot of sympathy, respect, and love among netizens around the world.

Many, like this one, called her a Wonder Woman, and that he salutes to her.

One was reminded of his own mother, who was always “responsible and loving”.

Another simply said that if he were her husband, he would have found better options for her like teaching her how to do business online.

A mother’s love is boundless

This woman may be in Russia, but it’s evident that a working mum’s courage and perseverance are universal as the photos touched the hearts of many.

While we are unsure what happened between the woman and her husband, her willingness to carry on and protect her children is admirable.

Here’s to hoping that she would eventually find a job that allows her to continue providing for the family. We wish for her to be safe and in good health always.