Dog With Cancer Adopted By Loving Family, Brings Joy To Them Despite Short Time 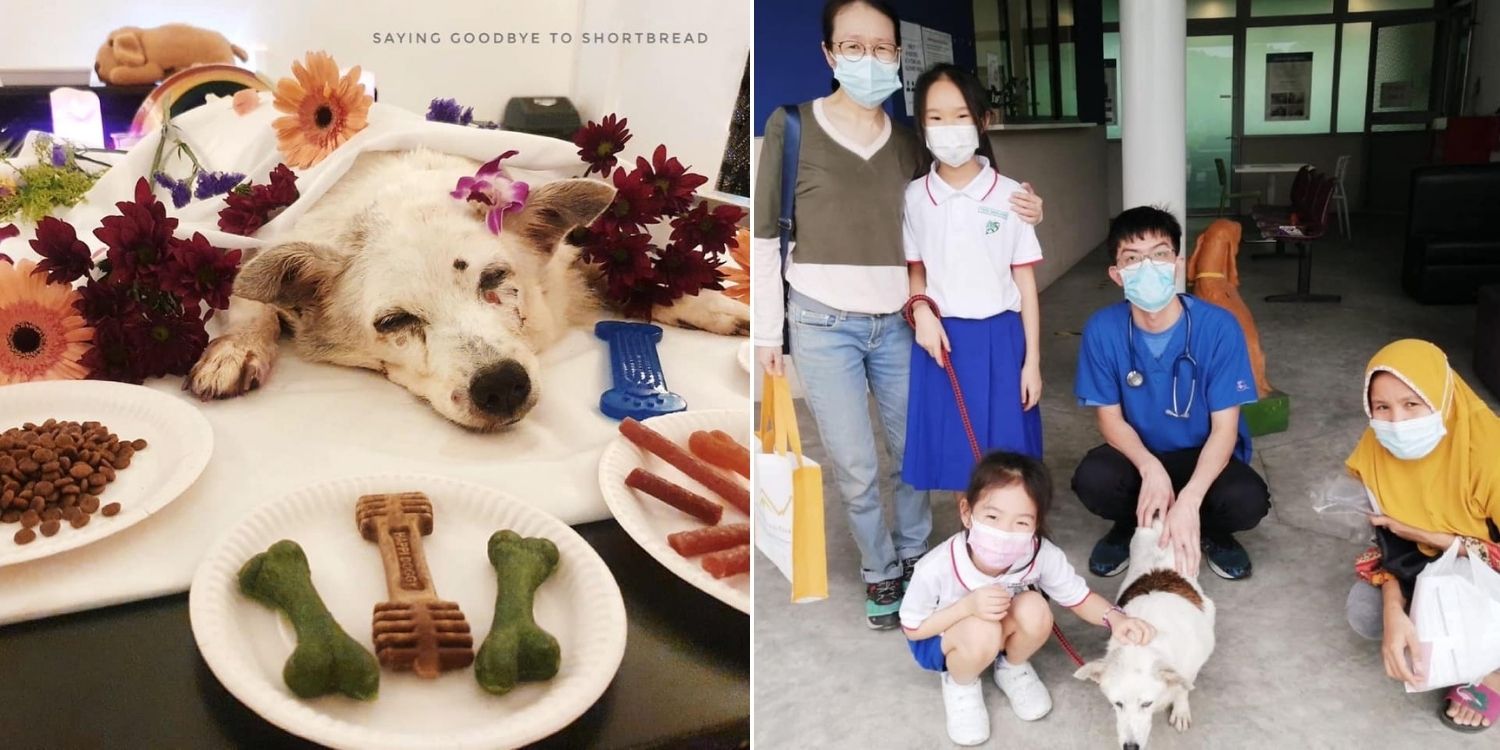 The family chose Shortbread when they found out about her illness.

When people choose to adopt a pet, they may have ideas of spending years of fun playing with a cute, healthy animal.

Yet other adopters may be picky and want pets that meet certain requirements.

For these reasons, many might shy away from adopting a dog with a terminal illness like cancer. However, when 1 Singapore family found out that a dog had cancer, they chose to adopt her instead – and they gave one another joy in her last days.

In a Facebook post on Friday (25 Jun), the Society for the Prevention of Cruelty to Animals (SPCA) Singapore told the story of a dog named Shortbread. 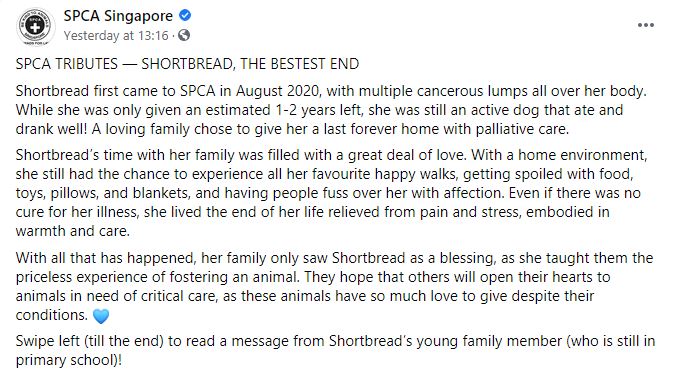 When she came to them in Aug 2020, she had multiple cancerous lumps all over her body.

Because of the affliction, she was given only 1-2 years left to live. 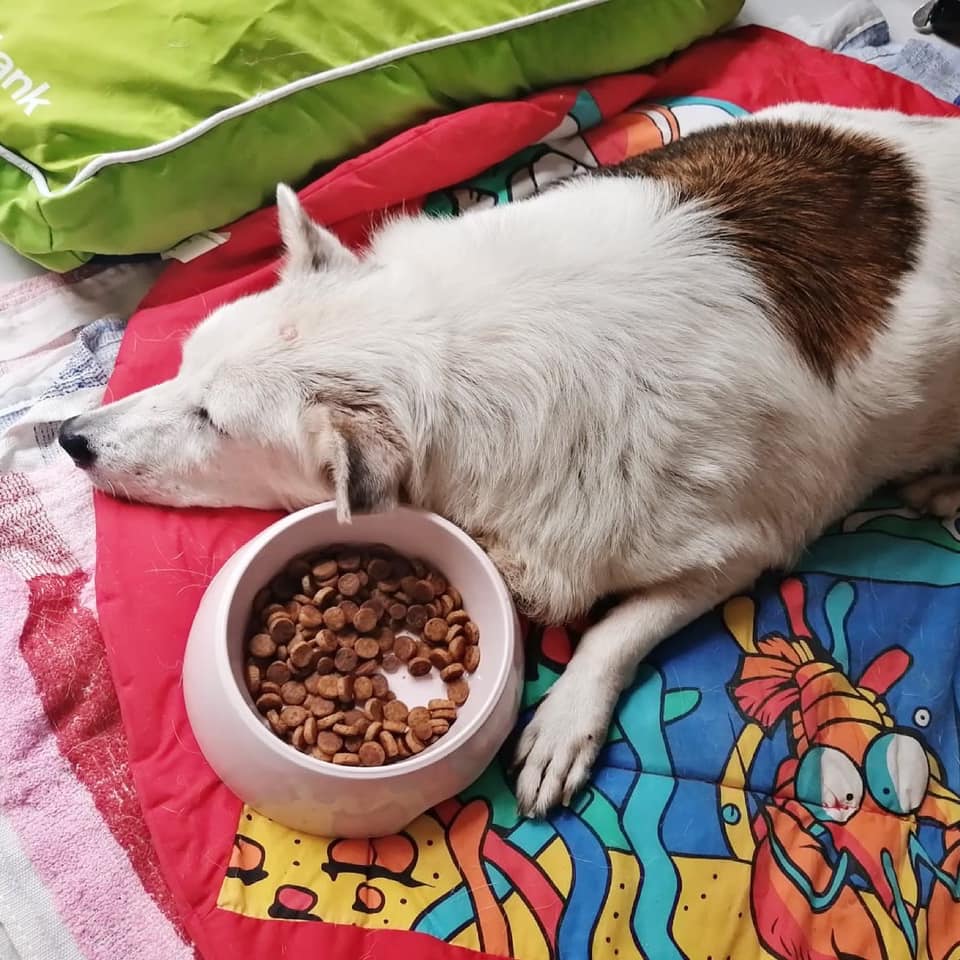 However, despite her illness, she was still active, and could still eat and drink normally.

A family willing to take her on

Many families, especially those with children, might prefer to adopt a healthy dog that will be a playmate for many years to come.

Knowing that a dog has a only short time left, some wouldn’t want their kids to be exposed to its nearing death so soon.

They would also have to spend more time, effort and money taking care of a sick dog.

However, 1 family was different – they were willing to take on the task of giving Shortbread her final home. 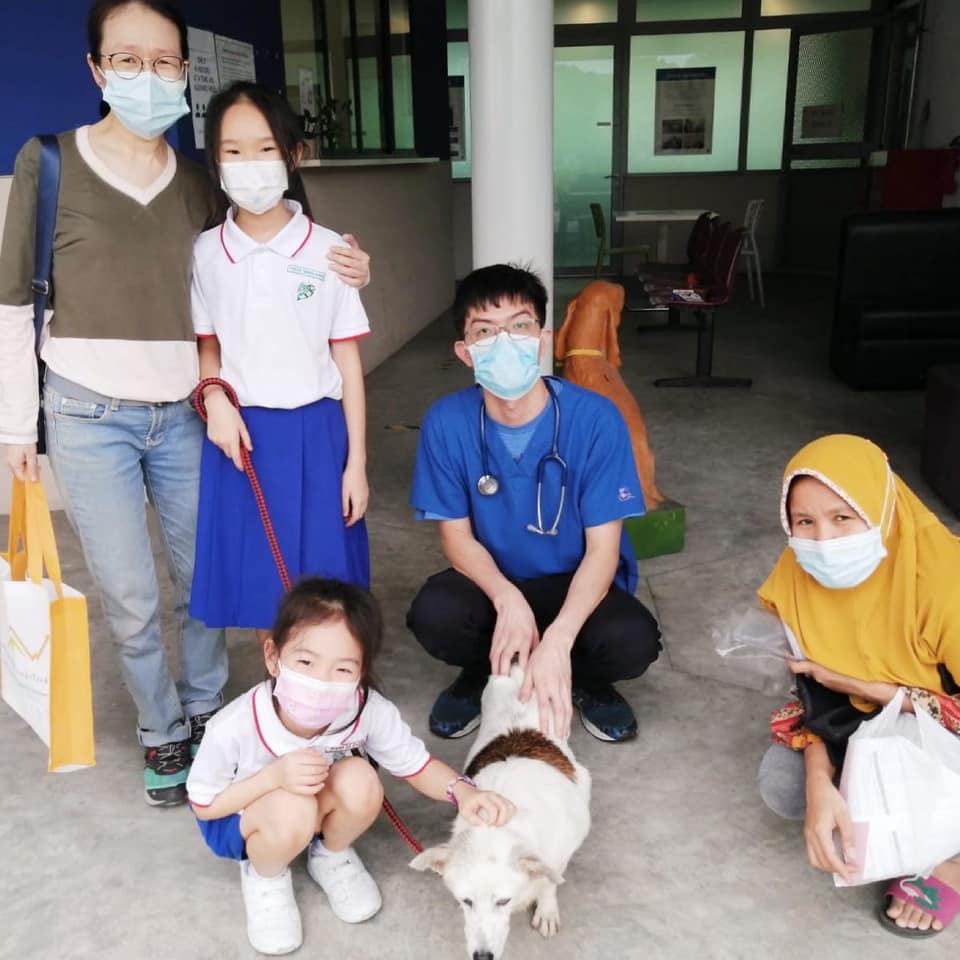 They showered her with love & affection

Not only that, they were also willing to shower her with love and affection.

According to SPCA, they brought her out for walks, fussed over her and gave all the food, toys and comfort she could want. 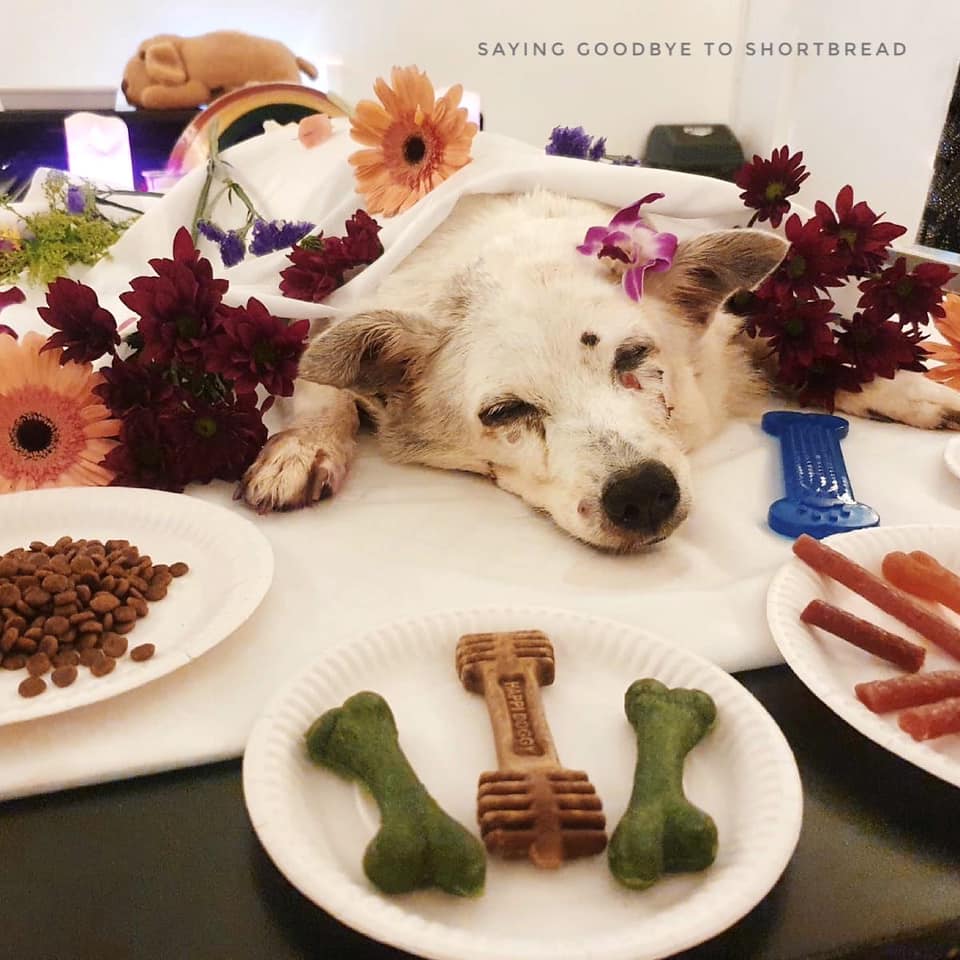 While other pets with such an illness might die in pain and stress, Shortbread never has to.

Never want for anything, Shortbread will live till the end of her life in their loving embrace.

She chose Shortbread after finding out about cancer

One member of the family who adopted Shortbread, a primary-school pupil, penned a touching letter about their beloved dog.

She said she actually wanted to adopt another dog, but changed her mind and chose Shortbread when she found out the dog had cancer. 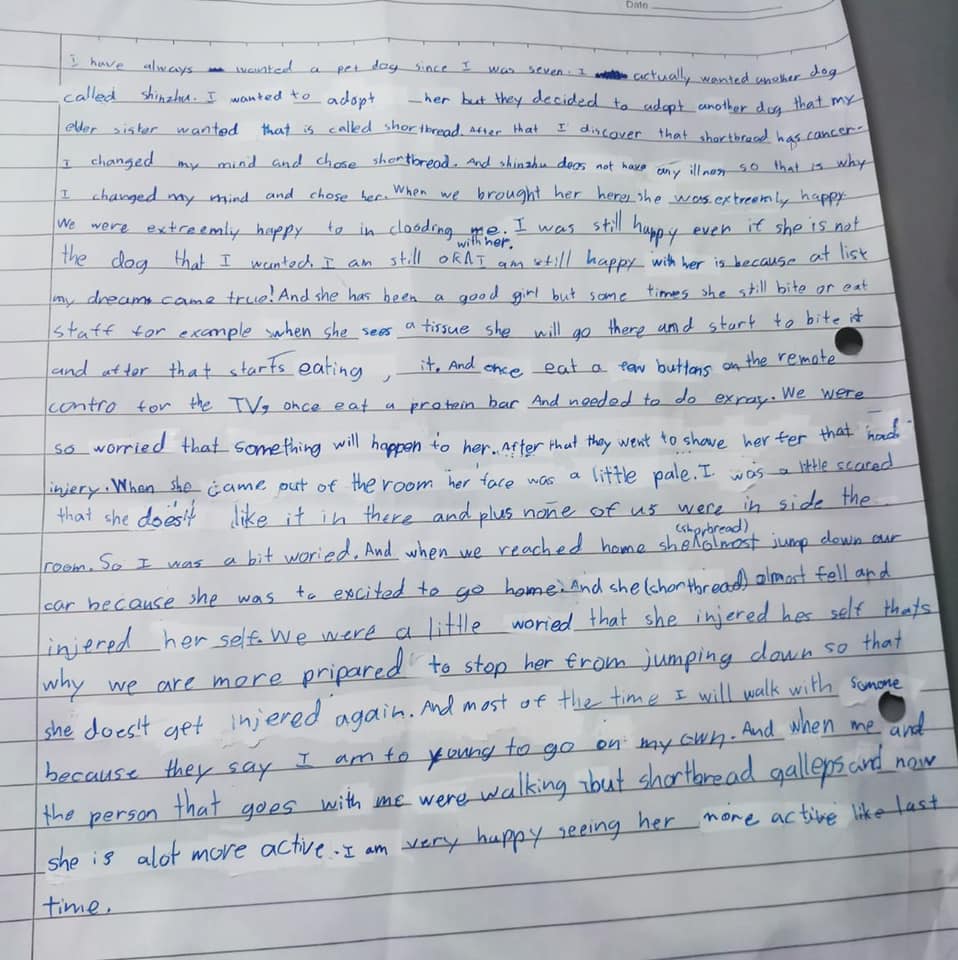 Despite not being her initial choice, she was happy with her, and the dog was happy too!

She also amusingly wrote about how Shortbread is usually a good girl, though she likes to chew tissue and ate the buttons on the remote control.

The dog had to go for an X-ray, and she shared how she was a little worried.

Lastly, she’s happy that Shortbread was more active after that ordeal.

Read the full version of her letter here: 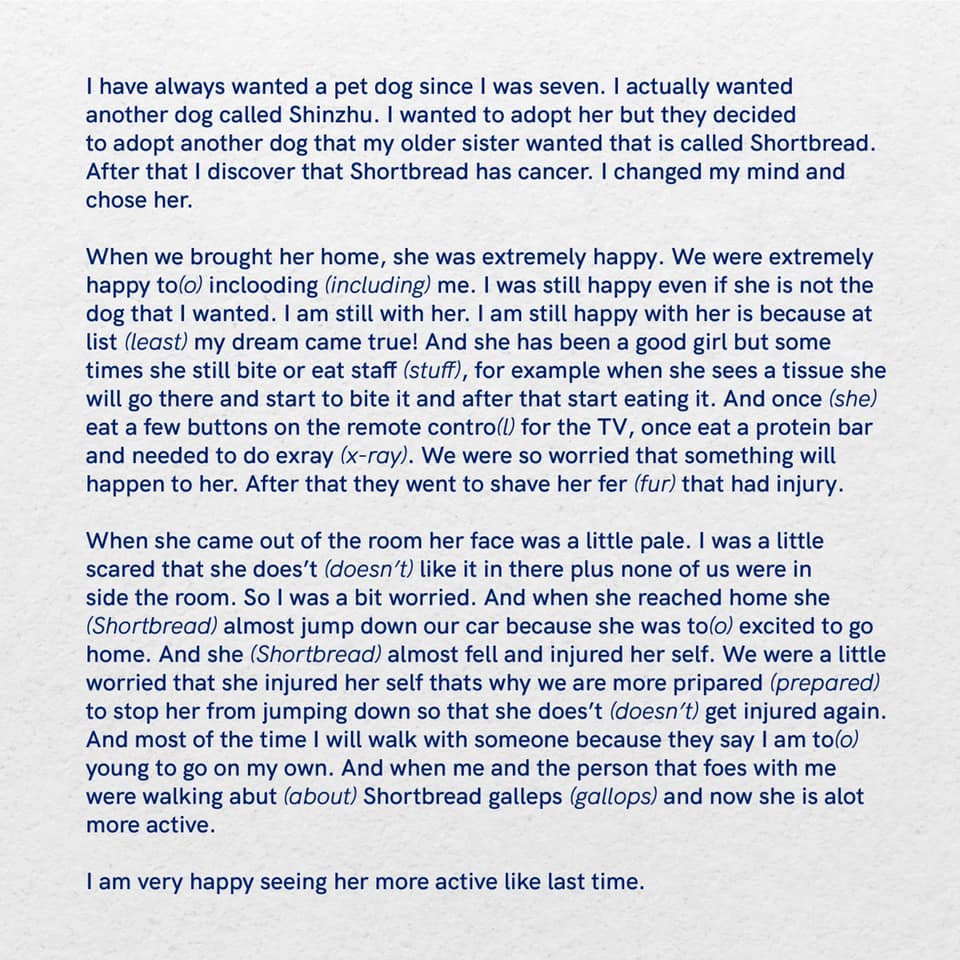 A dog is a blessing

According to SPCA, Shortbread’s family sees the dog as a blessing.

What the dog has given them is a “priceless experience” – fostering an animal. 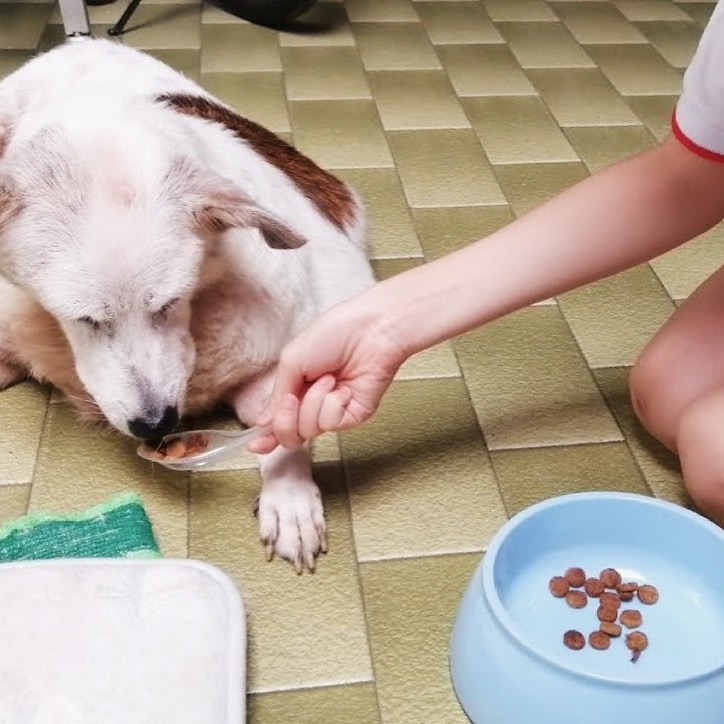 Thus, SPCA hopes other potential adopters will also open their hearts to animals that need to be cared for.

These animals may be sick, but they still have a lot of love to give.

Auntie Takes Senior Dog For A Walk On DIY Wheelchair, Says Taking Care Of A Furkid Is For Life

Some might view a pet as something that exists only to bring them joy.

But Shortbread’s family clearly feels that they have the responsibility to bring joy to the dog too.

That’s why they’re focusing on making her happy, and in the process finding their own happiness too.