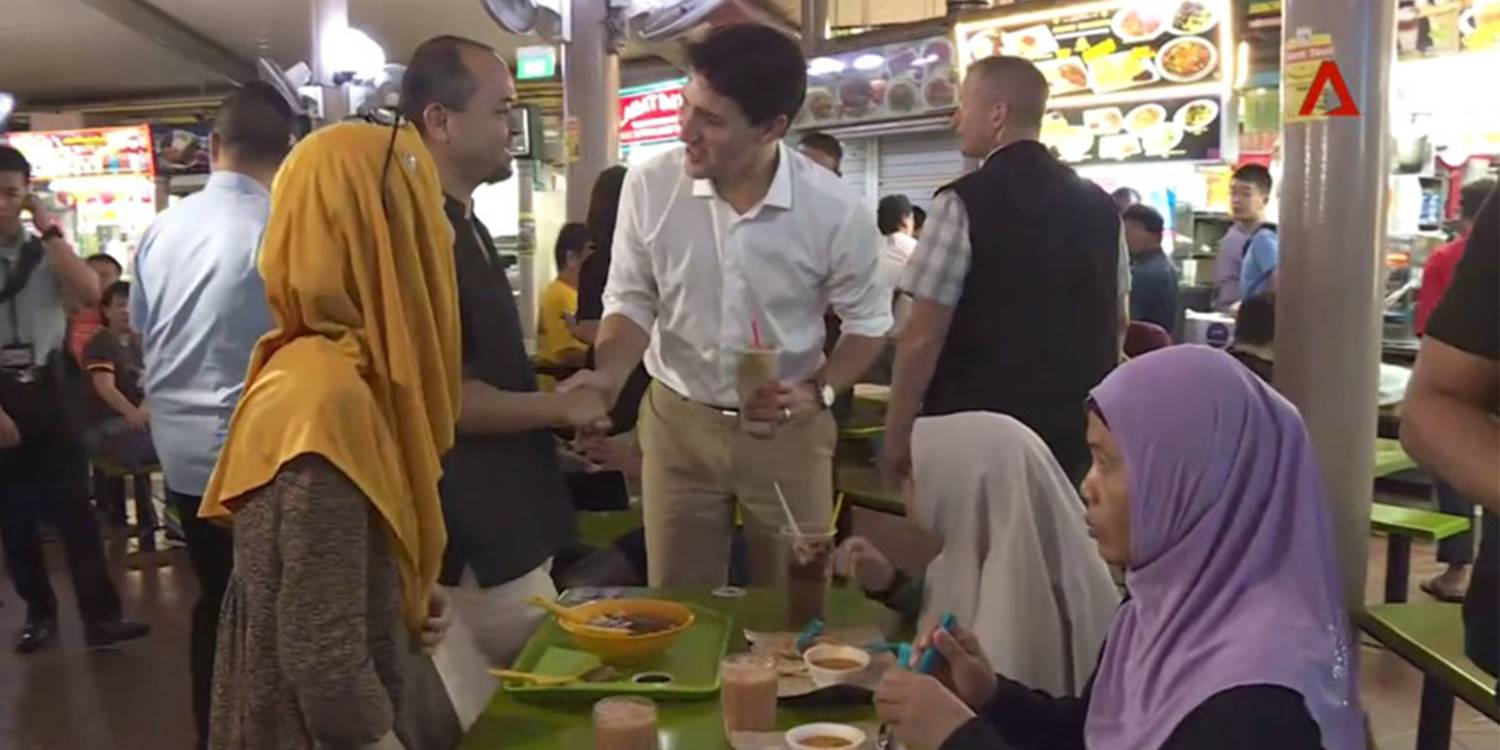 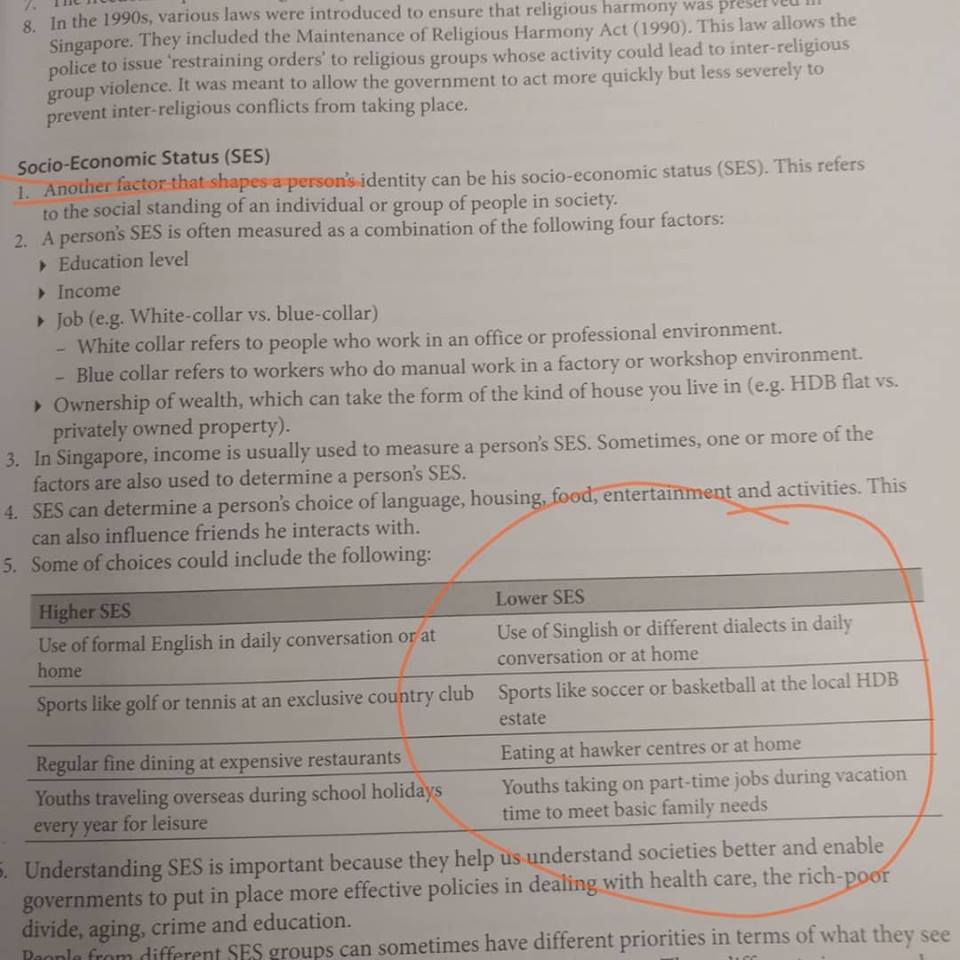 Taken from a locally-published Social Studies guidebook, it says that, “eating at hawker centres”, among other things, defines a person’s socio-economic status.

Thankfully, the Ministry of Education has confirmed that the title is not on the list of approved textbooks in schools.

And because we think the book’s points are so untrue, we’ve compiled a list of famous people who have tucked into meals at our kopitiams.

They range from pop stars to politicians and are a reminder that where you eat doesn’t really define who you are.

Canadian Prime Minister Justin Trudeau was the latest of the lot seen visiting our hawker centres. 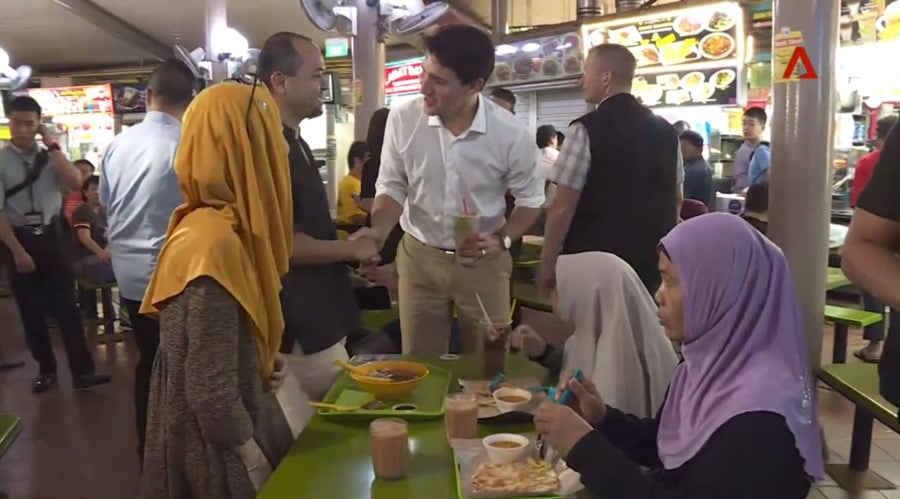 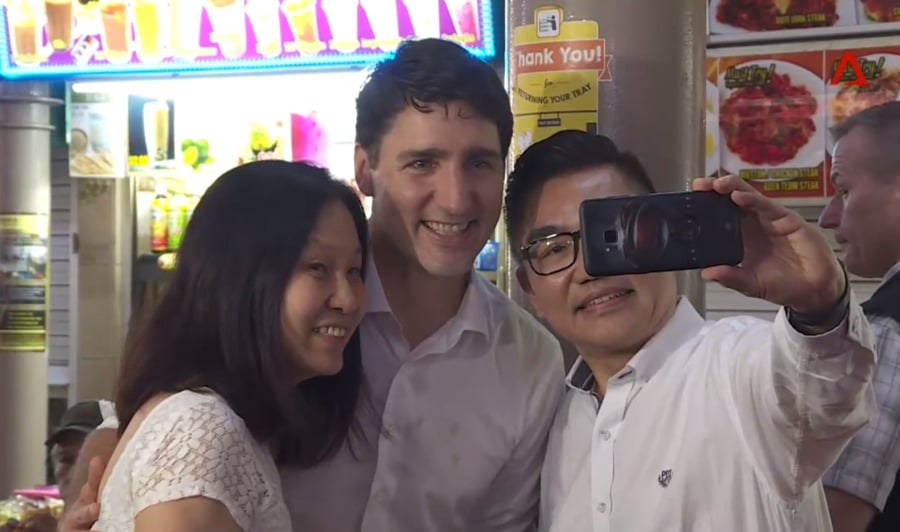 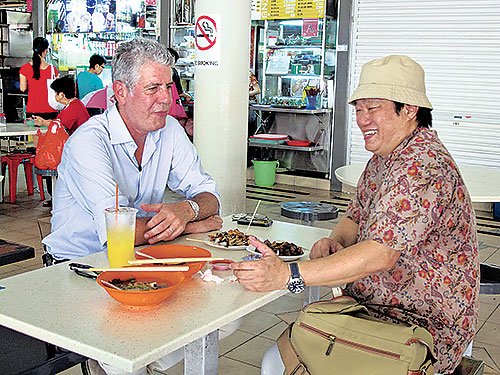 Anthony Bourdain is a well-known American chef with too many cooking shows and books to count.

He’s a huge fan of hawker fare and was inspired to open a Singaporean-style hawker food hall in Manhattan, New York.

Sadly, the plan fell through so you won’t find a hawker centre in the Big Apple for now.

And since Bourdain has a net worth of S$21 million, we definitely wouldn’t classify him as someone of a low socio-economic status, even though he hangs out at hawker centres. The dude’s a #baller. 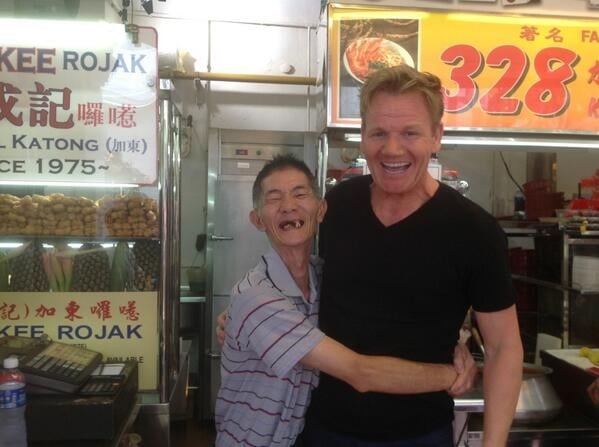 We absolutely adore this picture of some random uncle hugging Gordon Ramsay at a hawker centre.

Ramsay’s also a big fan of local cuisine, even participating in a cook-off a few years ago against local hawkers.

Unsurprisingly, he lost the competition because even Ramsay can’t recreate local dishes better than our homegrown hawkers.

But with a net worth of S$70 million, we doubt he’s shedding tears over the lost prize.

If anything, he’s doing just fine, even making occasional visits to Singapore to indulge in our best hawker fare. 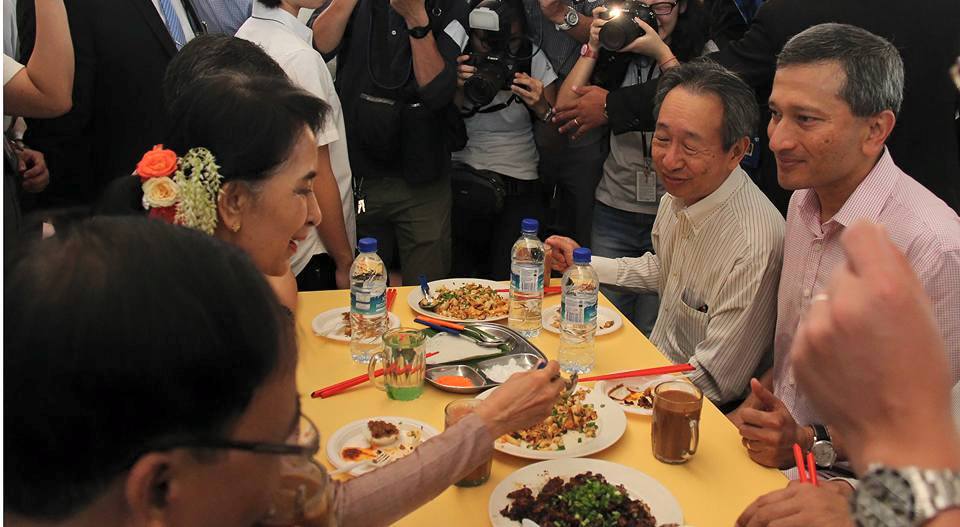 Who would’ve ever imagined a classy lady like Ms Suu Kyi dining at a hawker centre? We certainly didn’t.

But Myanmar’s State Counsellor did just that, joining our Minister for Foreign Affairs, Dr Vivian Balakrishnan on a trip to Ghim Moh Market and Food Centre in 2016.

According to Dr Balakrishnan, they ate a  variety of dishes, among them laksa, roti prata, putu mayam and chwee kueh.

Both politicians are doing pretty well for themselves, with Ms Suu Kyi’s net worth reportedly coming in at a whopping S$281 million, and Dr Balakrishnan’s reportedly at S$34 million.

Despite rolling in dough, we don’t expect that either of them will stop gracing our hawker centres anytime soon. 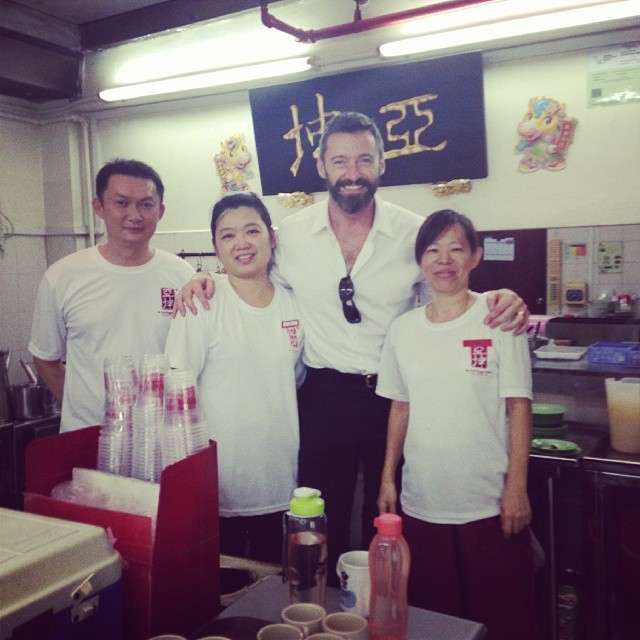 But we still think it counts, since you can also pick up a hearty kaya toast and kopi from the hawker centre too.

And as this photo shows, the classic Singaporean breakfast isn’t too good for Wolverine himself.

We can’t help fawn over this because that means that Jackman is as humble as he is hunky. What a catch.

The Australian megastar doesn’t just have his looks going for him, considering his net worth is S$130 million.

Despite that, he’s chill about where he eats, no biggie. 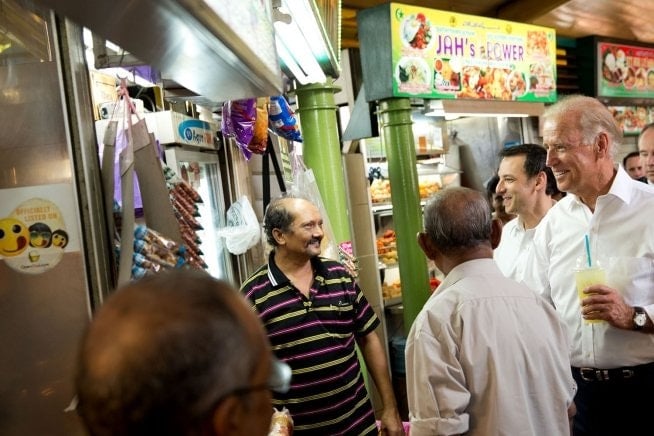 Imagine this: you’re having supper at Adam Road Food Centre and the then-American Vice President pops up at the table next to yours for a quick bite.

We would totally be #shook.

Seems like Mr Biden was holding a cup of sugarcane juice when this picture was taken in 2013.

And he knows more about just juice; the ultra-cool veep has a solid a net worth of S$1.2 million.

Here’s hoping that we run into him the next time we’re having nasi lemak at Adam Road; fingers crossed. 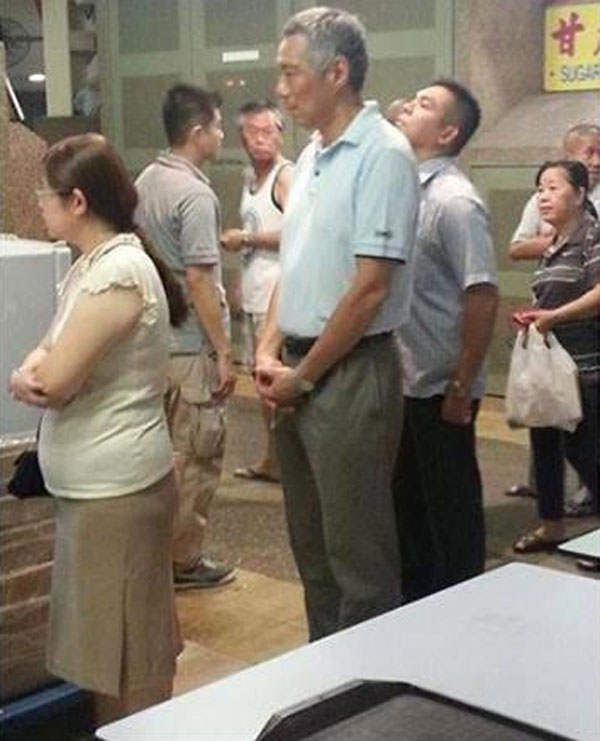 We can’t help but laugh every time we look at this picture of an unassuming PM Lee queuing up for fried chicken wings at Redhill Food Centre.

Although PM Lee has a reported net worth of around S$105 million, he’s evidently not too good for hawker food.

And even though he could have just gotten someone to bring the wings to him, it shows that good food is food worth queuing up for, even if you’re Prime Minister. 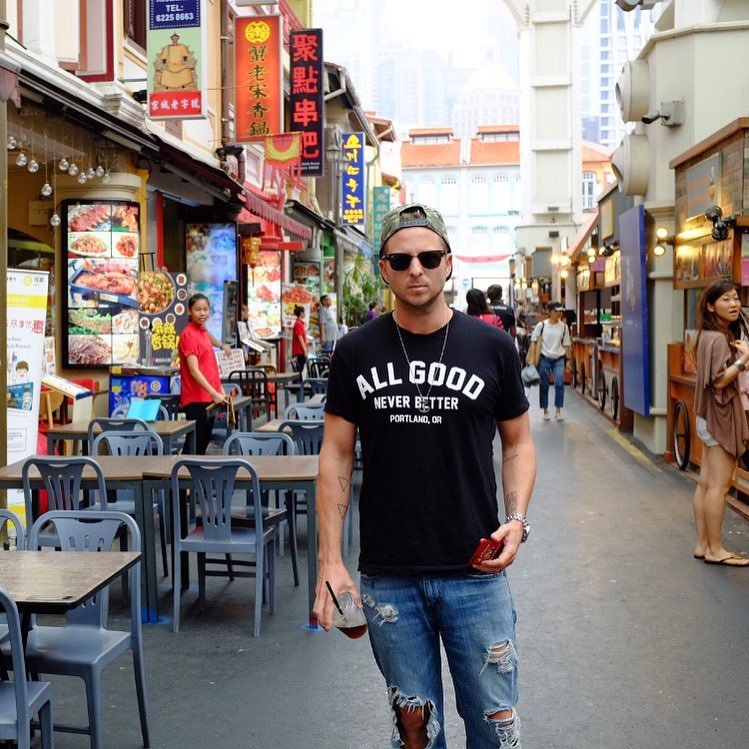 When the hit-making band was in town last year for a concert, they went on a personal mission to discover the cheapest Michelin Star restaurant in the world, Hong Kong Soya Sauce Chicken Rice and Noodle.

And we don’t blame them, since the chicken rice there is pretty good. Our stomachs are rumbling just thinking about it.

We always get too distracted when we’re thinking about food…

Anyways, Tedder’s net worth is $30 million, but he still made time to go loo for chicken rice instead of sitting around in his hotel room waiting for some overpriced room service version.

And there’s nothing cheap about that kind of passion.

Footballers Ferdinand and Aguero were in town a few years ago and took a break from their busy schedules to taste durian and other local food at Maxwell Food Centre.

They’re both super duper rich, with Ferdinand’s net worth coming in at S$98 million and Aguero’s at S$91 million.

We can’t help but feel a lot of pride, because Aguero really looks like he’s enjoying the carrot cake. 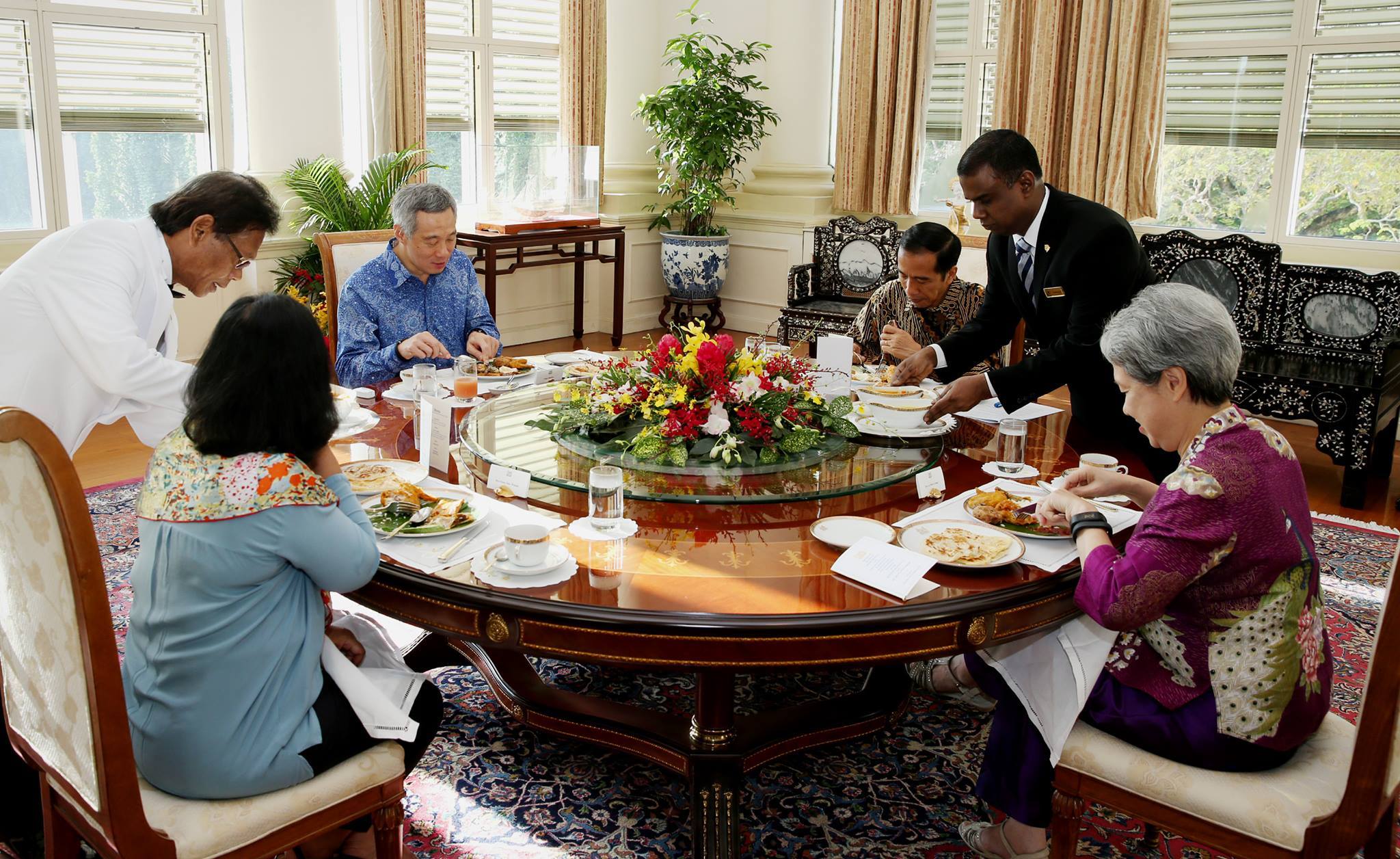 We think this one counts as much as the others on the list, even though they’re technically not at a hawker centre.

When Indonesia President Widodo and his wife visited recently, PM Lee treated them to a takeaway of Selera Rasa’s nasi lemak from Adam Road Food Centre.

Although we’re unsure of President Widodo’s net worth, we didn’t expect to see a President be so down to have hawker food.

But then again, that just proves the point that your economic status doesn’t really matter when you’re having amazing food. This one’s a bonus because when India’s PM visited in 2015, our PM took him to Komala Villas for a traditional South Indian meal.

Although Komala Villas isn’t hawker food, we wouldn’t exactly classify it as “fine-dining” either.

Where you eat doesn’t matter

We think it’s pretty safe to say that where you eat or hang out doesn’t determine your socio-economic status.

Having a plate of $3 chicken rice doesn’t mean you’re not well-off or that you’re struggling to pay the bills, and vice versa.

It’s simply impossible to assume one’s wealth from the kind of food they choose to enjoy.

After all, everyone knows that kopitiams are a huge part of Singaporean culture and their affordability brings people together, rather than separate them, as the guidebook implies.

We’re gonna carry on eating at hawker centres no matter what anyone says, because everyone knows that sometimes a dish that costs less than $5 is way more satisfying than one you pay too much for.