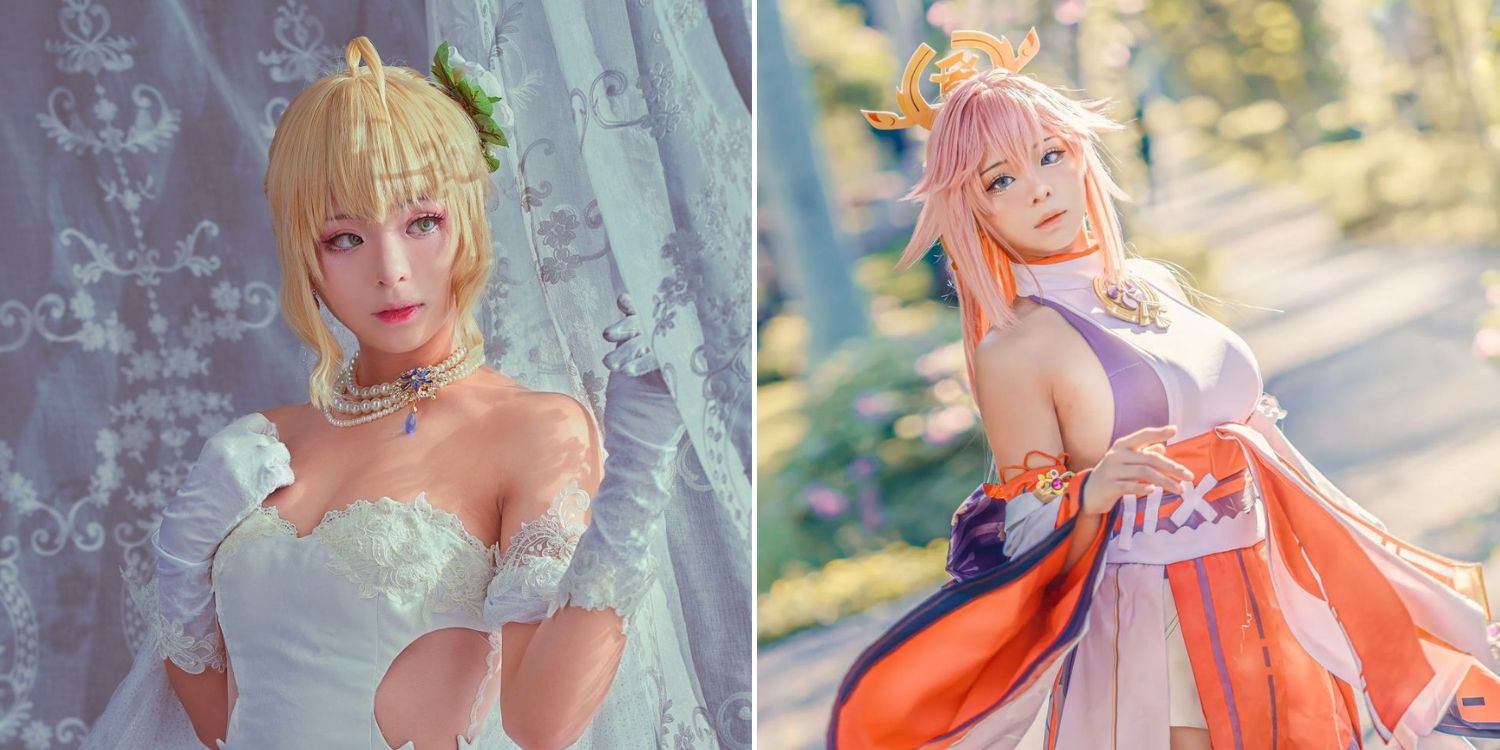 The 25-year-old is able to earn up to five figures on exceptionally good months.

But this is no glorified tale of yore to a 25-year-old girl who goes by the name Rithe. This combat maiden persona is very much part of her present reality, having spent years recreating and refining to look the part. 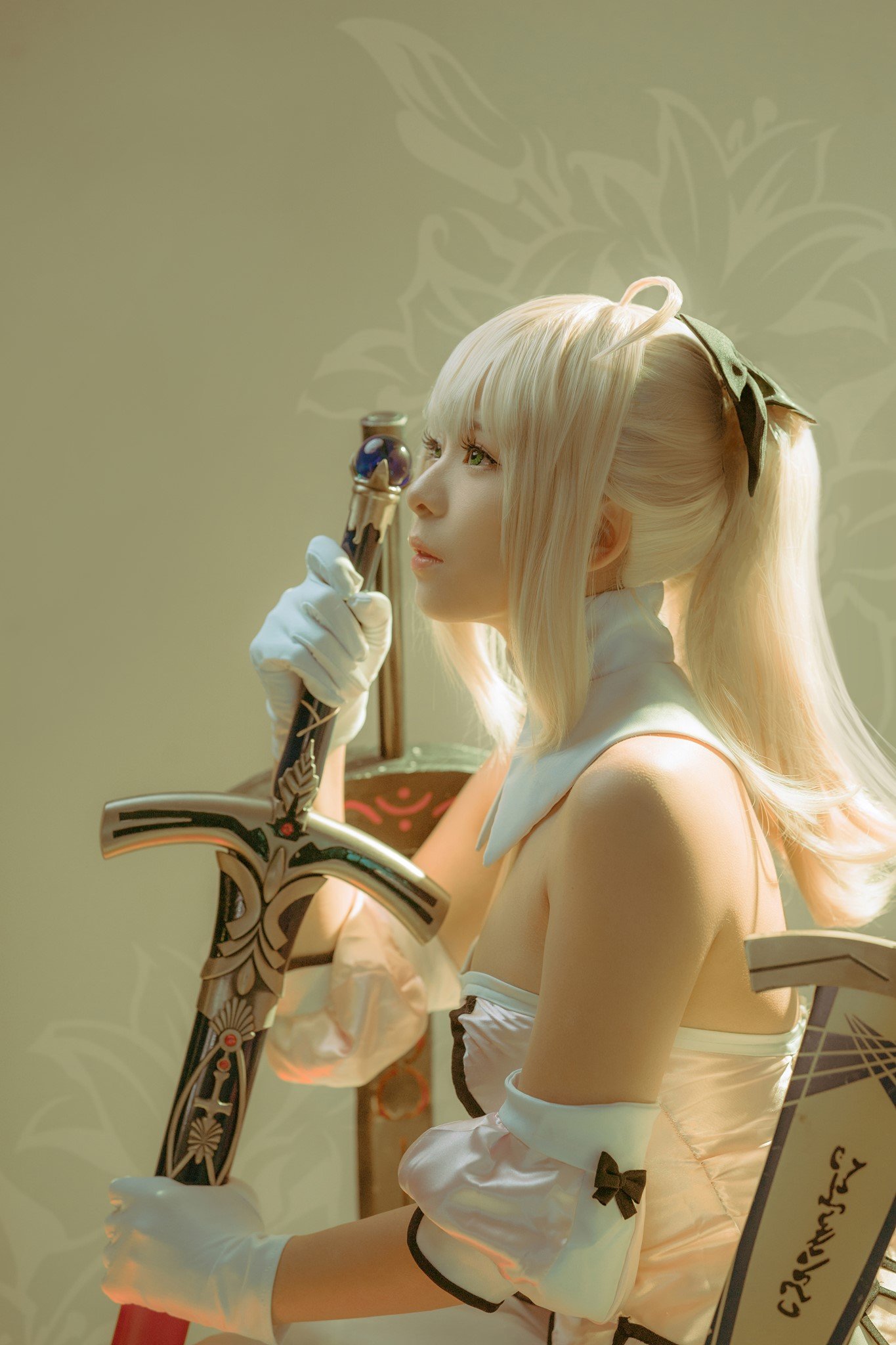 Welcome to the world of cosplay, a portmanteau of the words ‘costume’ and ‘play’. In this land of seemingly endless possibilities, anything goes.

And for Rithe, she’s chosen to play the role of Saber from Fate/Stay Night to perfection — not only as a hobby but also as a full-time career.

Now how does that work in Singapore society? MS News sat down with Rithe to find out what it takes to become a professional cosplayer and how she copes with her parents’ expectations.

Seeing cosplay as the best way to express herself

Meet Rithe, a 25-year-old Singaporean girl who has dedicated at least eight years of her life to cosplay. 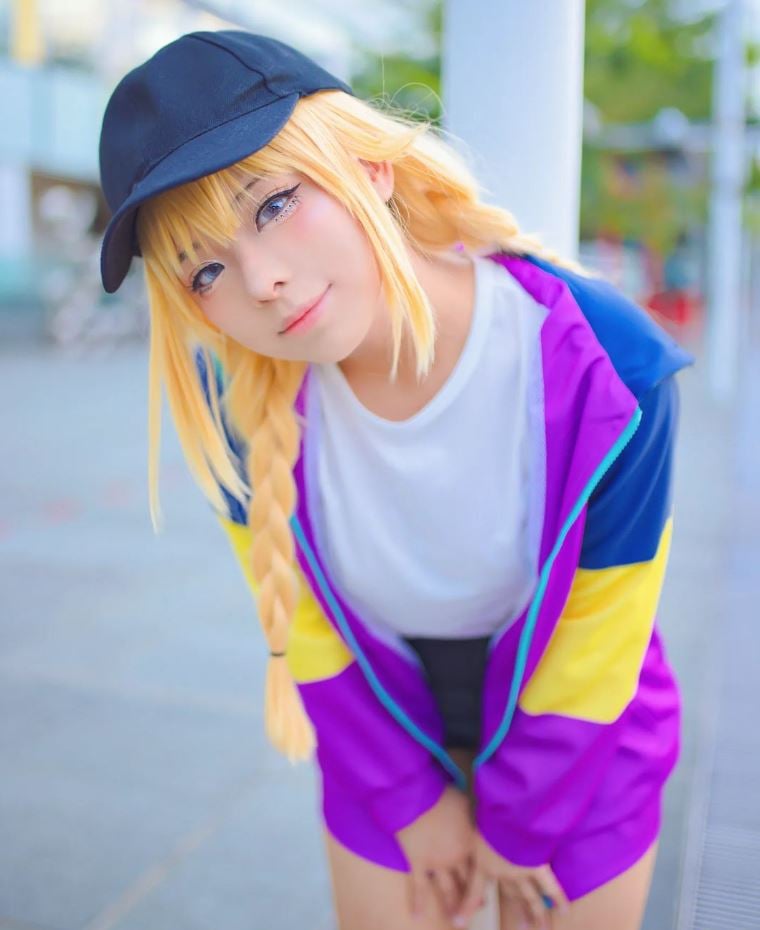 Despite graduating from the Singapore Institute of Technology (SIT) with a degree in interior design, Rithe felt that the art of crafting costumes and bringing fictional characters to life spoke to her more than anything. 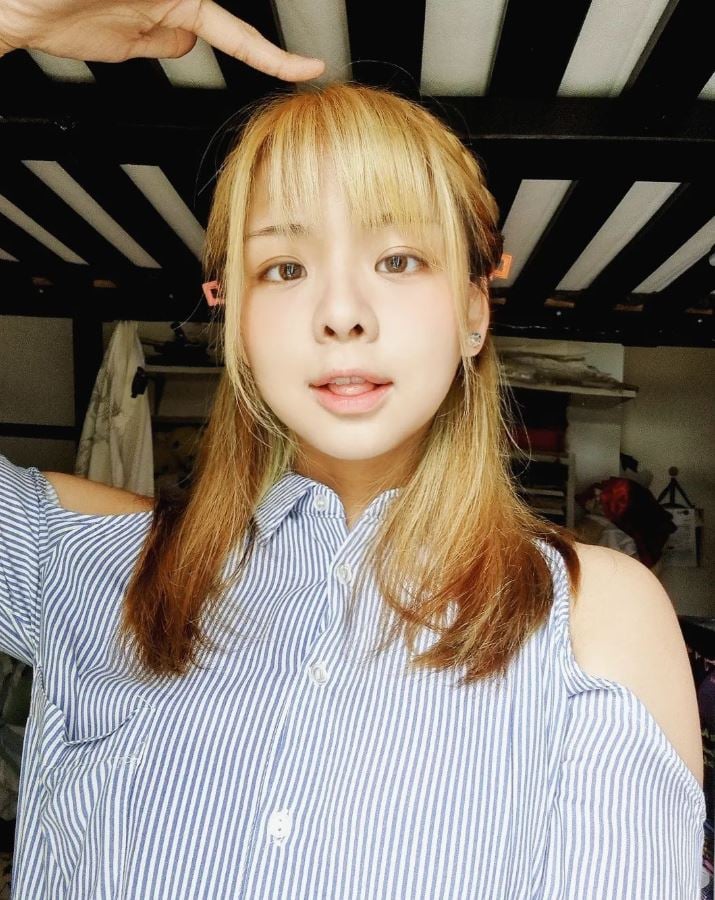 It all started when she was 13 and thought cosplaying was the surefire way to look cool among kids her age.

“Now that I’m older, in hindsight, I guess I was attracted to cosplay because it felt like the most appropriate way to express myself,” she said.

That’s precisely why Rithe, even at the tender age of 15, felt a connection to the Fate/Stay Night heroine, Saber. She wasn’t your run-of-the-mill, feminine, cutesy female lead — she was elegant, resolute, and looked absolutely kickass. 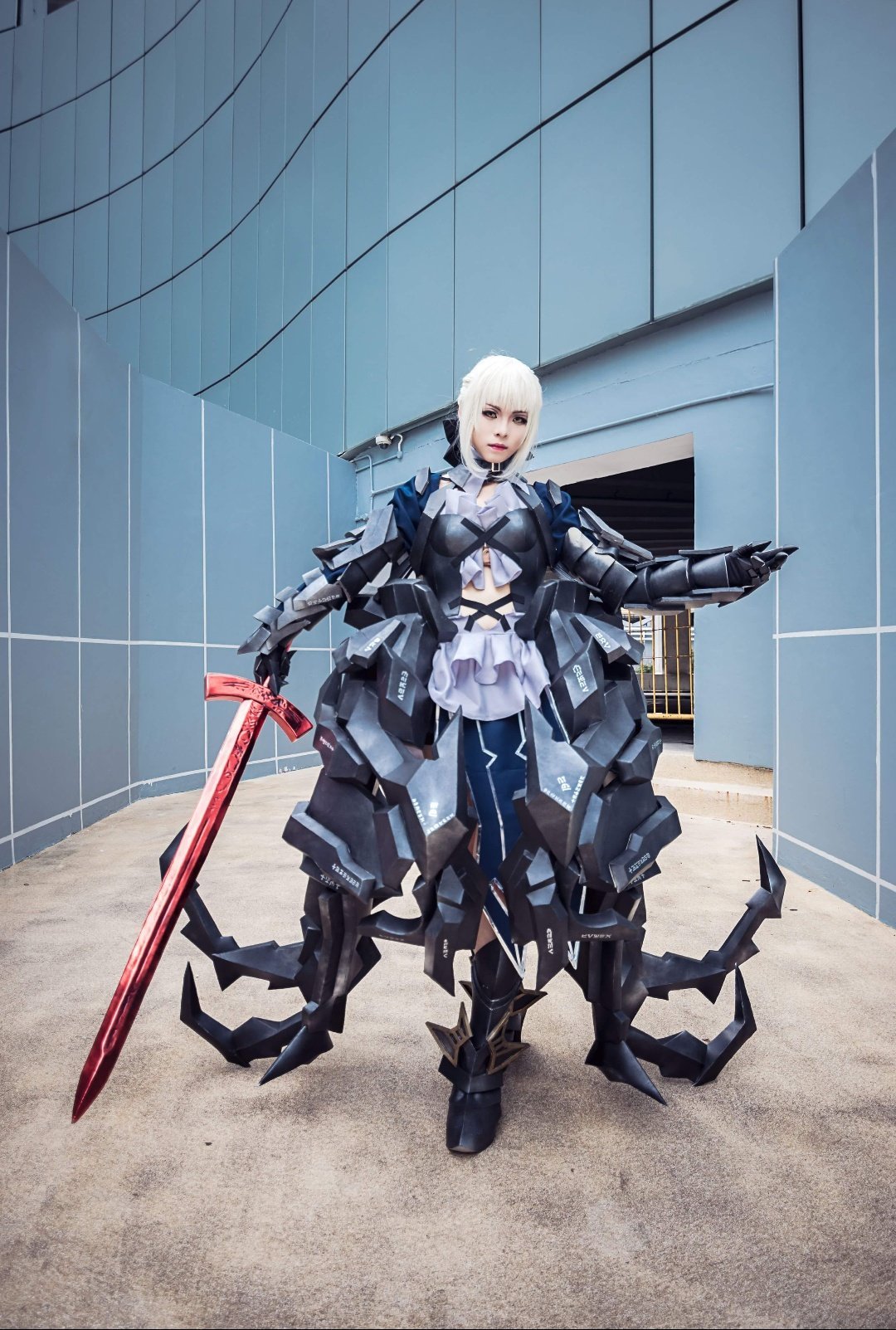 In the story, the character also cares for others greatly, helping a teenage boy grow into a man of his own throughout the series.

“Saber represented the kind of adult that I wanted to become,” Rithe mused.

Parents were firmly against Rithe working as a full-time cosplayer

Coming from a traditional Singaporean family with busy parents chasing lofty dreams, Rithe, the youngest among three siblings, was often left to her own devices.

“My parents were too busy with work. Although I never had to worry about food or basic needs – something I’m thankful for – I missed their company a lot when I was a kid.

“They weren’t as emotionally available when I needed them. But, because they’re also workaholics, they supported the idea of me working hard for the things I wanted,” she said.

In Rithe’s parents’ minds, they were probably expecting her to work hard, earn a stable income, and clock in the hours from nine to six daily.

So when she started venturing into cosplay and wanted to go from making it a hobby to a full-time profession, it was a hard pill for them to swallow.

We quarrelled a lot.

On the one hand, Rithe’s mother begrudgingly warmed up to the idea, saying, “I don’t support it, but if you really like it, then okay.”

But on the other, her father was strongly against it. “I understand where he’s coming from because he’s a business owner. He wants to ensure I’m financially stable, not just now, but for the rest of my life.”

During Rithe’s schooling days, she cosplayed at events once every three months. Even so, it was enough for her parents to worry that she was mixing with the wrong crowd.

“I guess it’s comparable to tattoos. Back in the day, it symbolised being in gangs and stuff. But nowadays, people do it as a form of art and expression.

“Cosplay is just like that. It was a concept my parents couldn’t get,” she related.

But not all was lost. Things eventually worked out when Rithe started gaining international recognition for her gorgeous cosplays.

In late 2018, she and another teammate won first place in the Singapore preliminaries of the World Cosplay Summit 2019 — the world’s largest cosplay festival. The achievement landed her the golden opportunity to visit the Land of the Rising Sun on a fully sponsored trip to represent Singapore in the finals.

“My parents saw how well I was doing and the amazing opportunities I was offered, like getting to fly to Japan for a two-week trip without worrying about air ticket and hotel prices.

“Despite their worries for me at the start, I believe they would still see reason in approving my goals once I’ve proven I’m capable,” she said.

So now, even though she’s self-employed, her parents are her ‘bosses’ because she’s required to report her monthly earnings to them.

In a way, this allows her to be more disciplined and motivated. They also want to make sure Rithe does everything by the book.

If you look through Rithe’s socials, you’d see the face of a bubbly, confident girl who’s not afraid to dress up in fanciful costumes and challenge the norm. 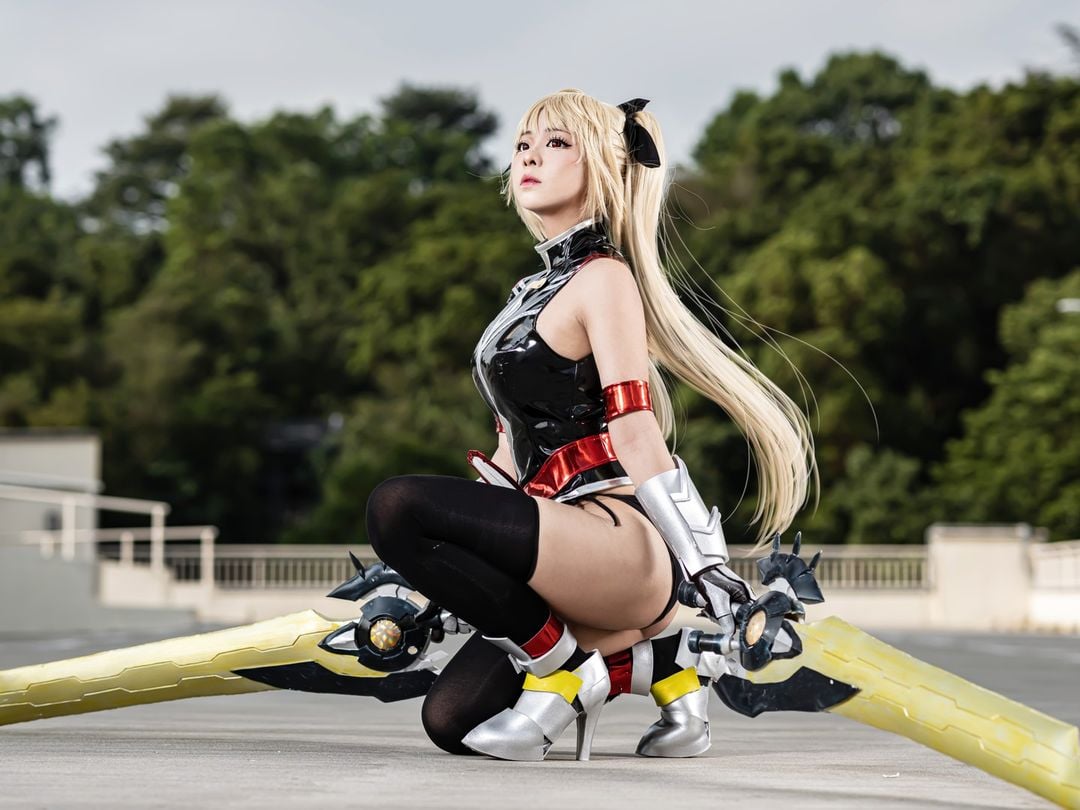 She also has an 86,000-strong following on Instagram. But the journey towards this newfound fame wasn’t always smooth sailing.

Although Rithe has found her footing as a full-time cosplayer for a while now, deep down, she still feels insecure about many things.

For one, she admitted that she had to constantly prove to her parents – and naysayers – that she was worthy.

Being the youngest in the family, Rithe often compared herself to her older brother and sister, both of whom have master’s degrees and are in stable relationships.

Then here I am — being self-employed, dressing up very differently from others, and still single.

Rithe also fretted about having to prove to strangers that her entrepreneurial efforts as a full-time cosplayer were going to work. Oftentimes, she harboured doubts about whether she was “just a young kid with stupid dreams”. 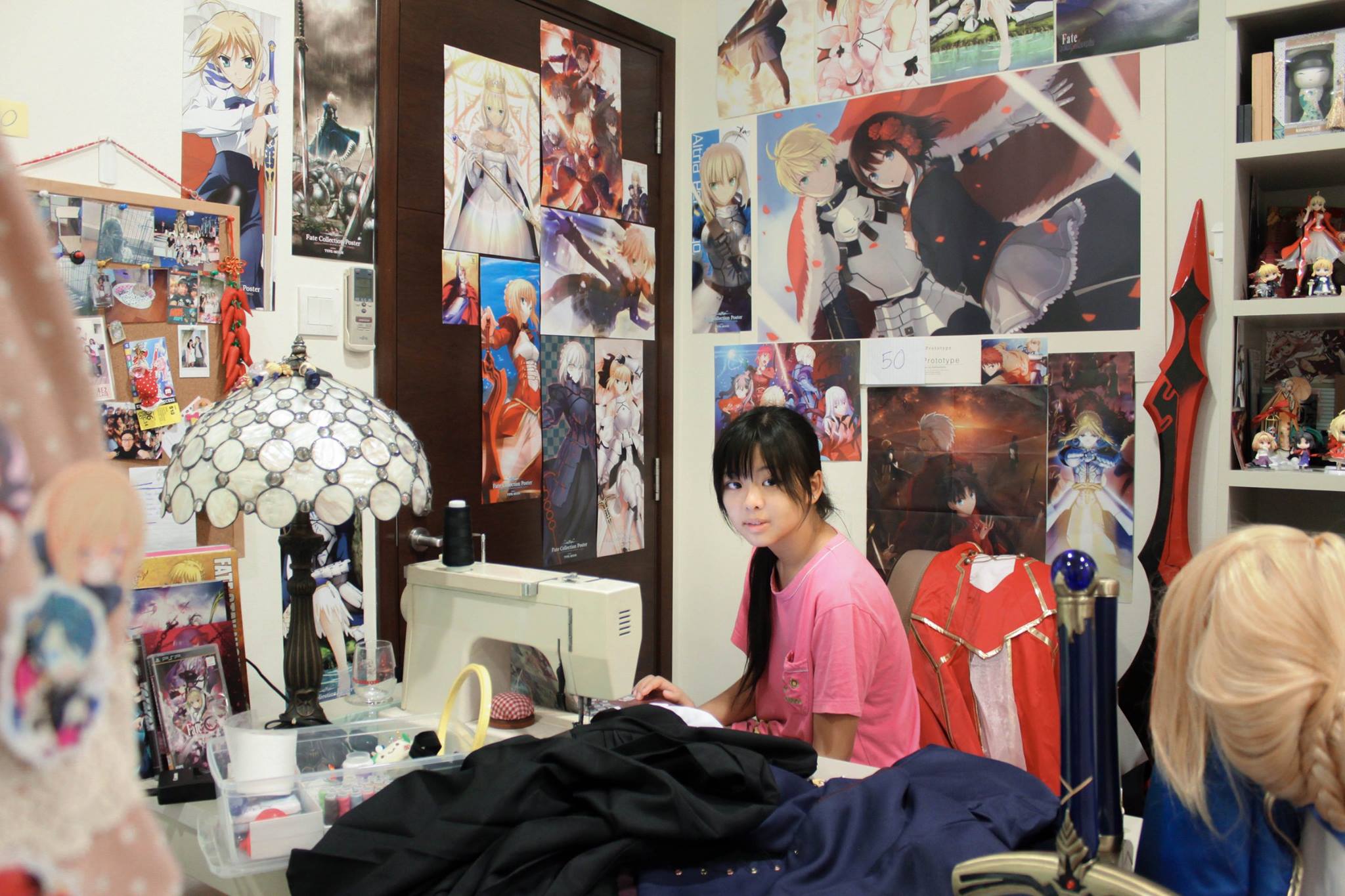 Rithe when she was 18, diligently creating Saber costumes in her room
Source: Rithe 莉提 on Facebook

On bad days, she would break down and lose sleep over thoughts of her future.

I often wonder if people around me accept me as a cosplayer, and if I can find a partner who will accept me for my unusual career choice.

Recounting how she drifted apart from several close friends just because they couldn’t see eye to eye about her decisions, Rithe said she was often asked, “Why don’t you get a stable job and do this (cosplaying) as a side hobby?” 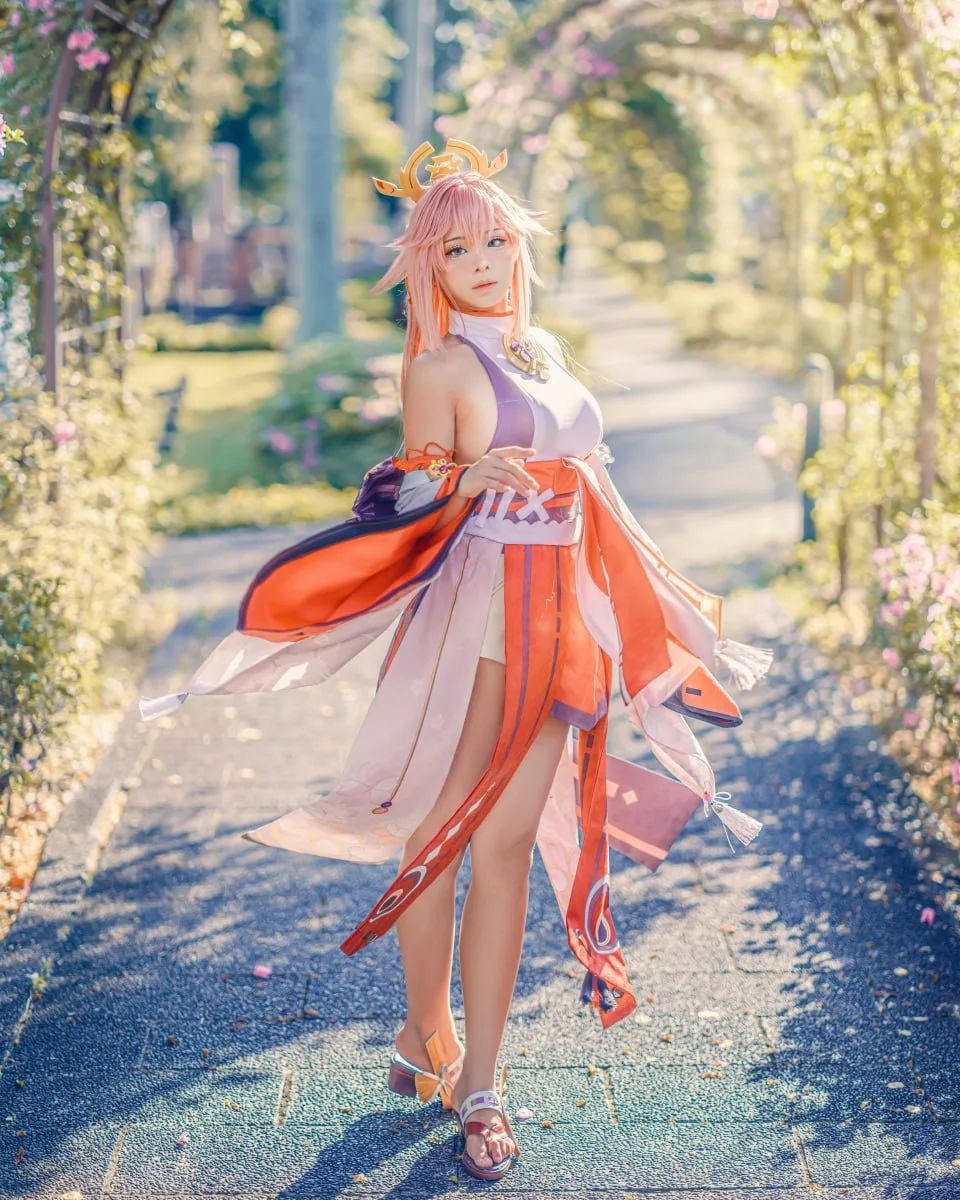 On the contrary, she had a two-year stint in a so-called ‘stable’ job before. Even though it did help her fund her CPF account, among other things, Rithe’s mindset was different from most office workers.

“I realised during the pandemic that no jobs are as stable as you think. At any given moment, you could lose your job the next day because you’re at the mercy of your employers.

“If that’s the case, I’d rather work on something that means more to me instead of working for someone else.”

Breaking down the inner workings of full-time cosplay

So how does one actually get by as a full-time cosplayer?

Rithe shared the importance of diversifying your income. She does this by freelancing, partnering with brands for events, selling merchandise such as photobooks, and securing sponsorships.

While there isn’t much need for her to freelance now, she keeps this window open as it allows her to stay afloat during tough times. Here’s a fun fact: she used to do GrabFood deliveries too to make ends meet.

Building a presence in the industry is crucial now that things are more comfortable for her. Rithe said this is the best way to capture the attention of major brands, so she’s been focused on growing her following to seal big contracts.

Some brands she has worked with so far include MSI, Huawei, and LiHO. 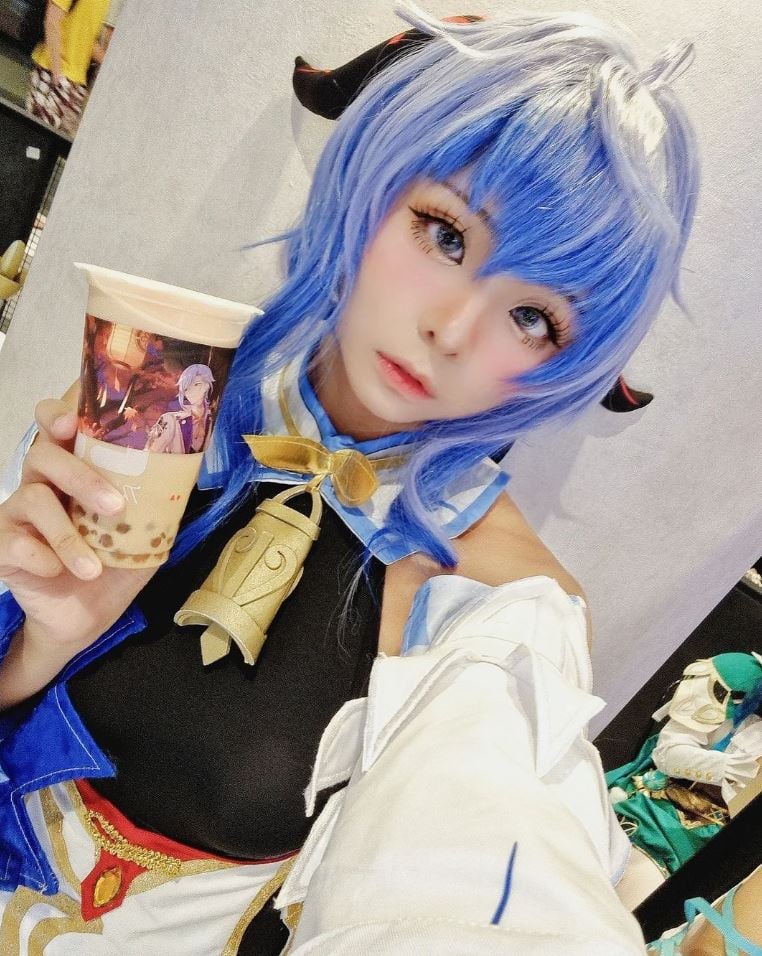 On a regular workday, she wakes up at about 5am so she has ample time to prep for a photoshoot. Then, she spends the rest of the day editing photos, sending emails, or crafting her next costume, depending on which she should prioritise. Running a Patreon allows people to contribute funds to her monthly. These benefactors are usually fans who are eager to watch her flourish in the cosplaying scene.

On exceptionally good months, Rithe’s monthly income is able to hit five figures. But on bad months, it could be as low as S$700.

“So if you average out my earnings throughout the year, I’m taking home around S$3,000 to S$4,000 a month,” she smiled sheepishly when asked to reveal the sum.

I’m essentially a one-woman team, and I try to keep it that way.

Reminds herself to take care of her health

Working alone, however, can take a toll on your health, especially when you’re always rushing to accomplish many things at once.

Rithe learnt this the hard way when she got only two hours of sleep each night in her first year of university.

“I was crafting and cosplaying regularly apart from attending classes and working a part-time job.”

So, her schedule on most days looked something like this:

Sadly, Rithe’s body started silently protesting against her enervating lifestyle. She ended up catching a severe cold, which turned out to be pneumonia.

Now that she’s a full-fledged adult, taking care of her health is the utmost priority because her ability to earn an income depends on her well-being.

As she plans to cosplay for at least 10 to 15 more years, she would often fall back on this memory to remind herself to treat her body like a temple.

Don’t work too hard. The things you want to do won’t run away. But if you screw up your body, you can’t do anything at all.

Working hard for her future

Being self-employed can be a scary notion to those who are much more comfortable earning a monthly paycheck.

But some individuals like Rithe make the unconventional choice of walking down that path in their 20s.

Rithe’s story taught us that all jobs are good jobs, as long as you have the passion for earning an honest living. Despite her fears, it’s commendable that she took the road less travelled and is now bravely hustling to make a name for herself.

So if you’re reading this and you have dreams you want to achieve, have a little faith in yourself and take the plunge when the opportunity arises. And more importantly, have a solid plan to make things work before you do.

Know more inspiring individuals like Rithe? Get in touch with us via email at news@mustsharenews.com.