Viral Genting Love Story Teaches Us To Treasure Our Relationships

Some date just for fun. Others choose to date with forever in mind.

But this anonymous confession from a guy who had a girlfriend with an expiry date, is a timely reminder to shift our perspectives on relationships.

What began in Genting between them, will surely echo in the realm of internet love stories long beyond this post on Monday (6 Aug). 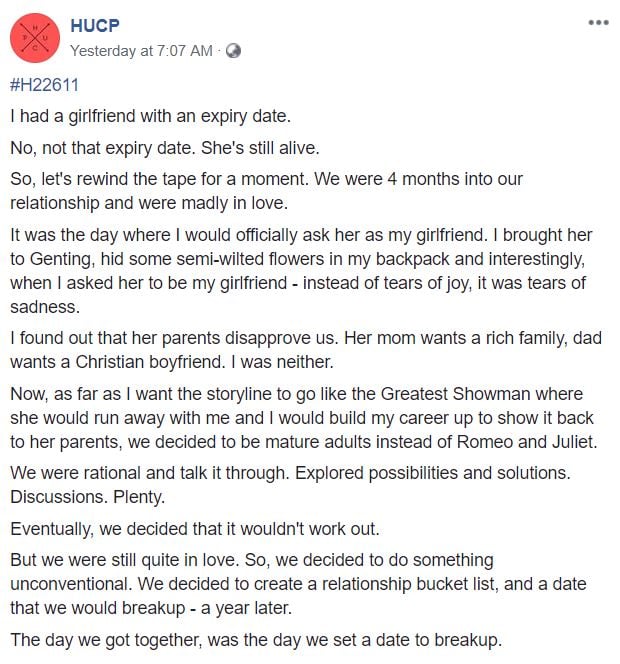 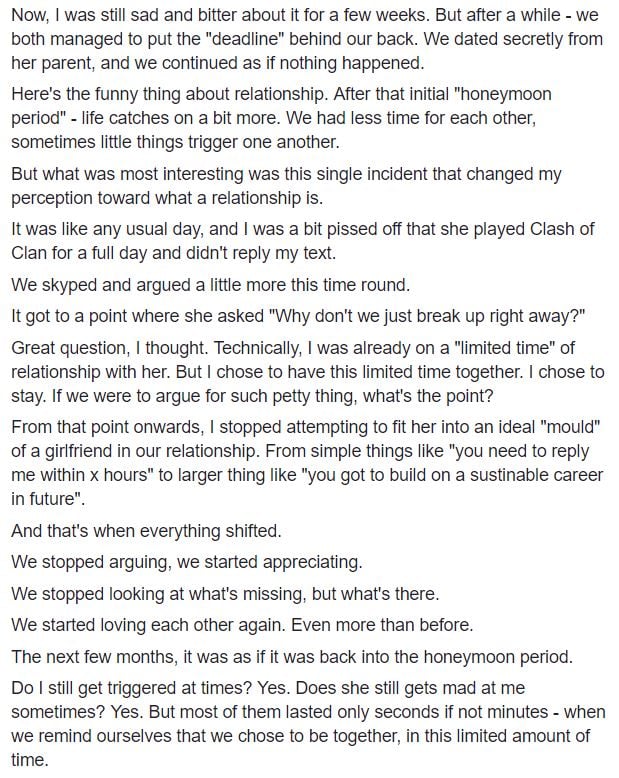 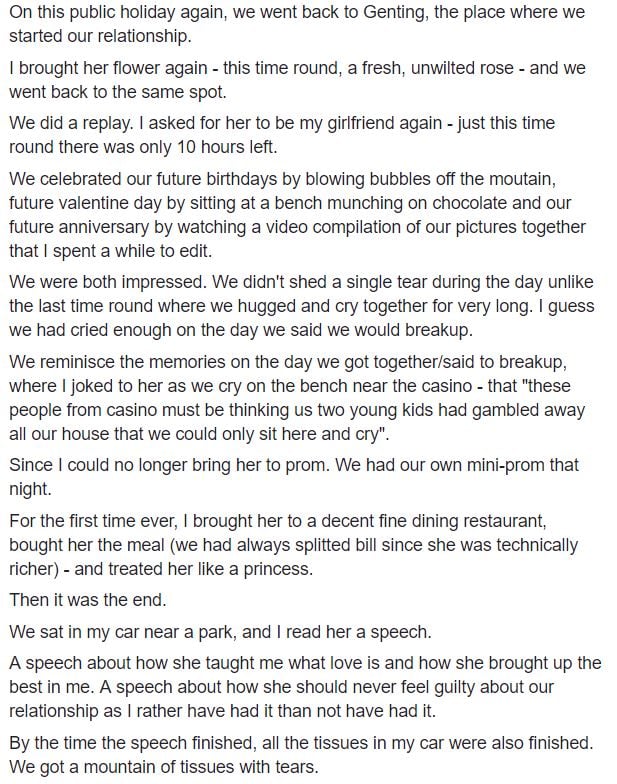 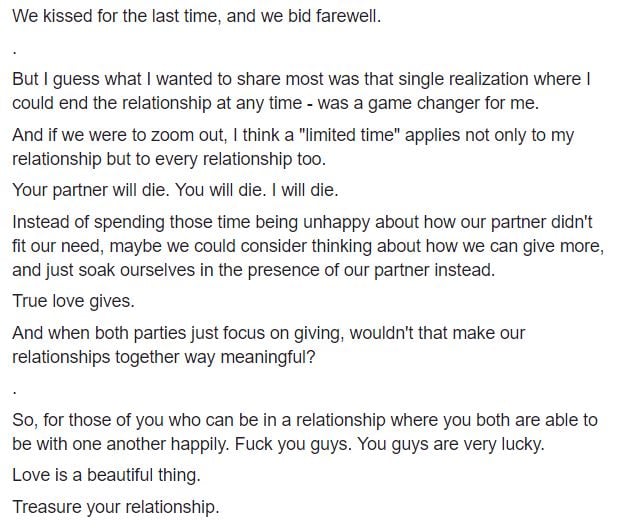 Relationship with an expiry date

After meeting the girl of his dreams, the writer brought her to Genting and asked her to be his girlfriend. 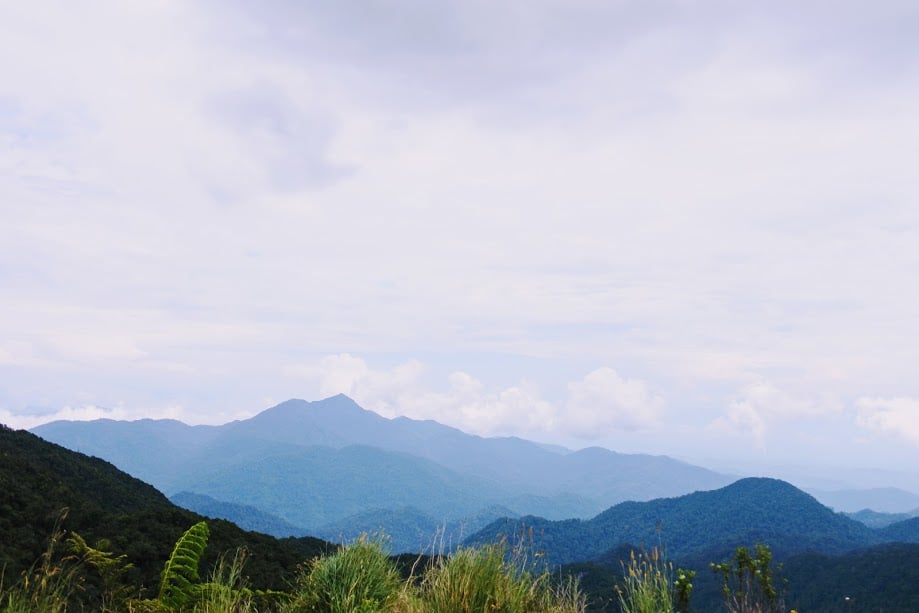 Hiding semi-wilted flowers in his backpack, he discovered to his horror that she was crying tears of sadness instead of joy.

Turns out, her parents were against the relationship as the writer was neither rich nor a Christian.

The couple talked it through rationally and explored their various options.

As they were madly in love, they went with something “unconventional”.

They created a “relationship bucket list”, and set a time limit of one year, before they broke up.

He mused in a bittersweet manner,

The day we got together, was the day we set a date to breakup.

The couple soon put the “deadline” behind them, and “continued as if nothing happened”.

Like all relationships, the initial “honeymoon period” came to an end, as regular life caught up with the both of them.

As they spent less time with each other, even the “little things” began to get on both their nerves.

To make matters worse, they struggled to keep the relationship a secret from her parents.

Choosing to stay together

But an incident soon shifted his perspective, effecting profound change on their relationship.

His girlfriend had played a popular mobile game, ‘Clash of Clans’ for a full day — without replying to his texts.

On their Skype date, an argument ensued, where she uttered the words he feared the most,

Why don’t we just break up right away?

He considered going along with her wishes at first, as their relationship was already limited to start with.

But the writer soon realised,

I chose to have this limited time together. I chose to stay. If we were to argue (over) such petty thing(s), what’s the point?

That’s when everything shifted

He stopped expecting things from his girlfriend. In particular, wanting her to fit into an ideal “mould” of the perfect girlfriend.

By helping her build a sustainable career instead of wishing she’d to reply his messages, he says that’s when everything shifted.

They stopped arguing, and started appreciating each other more.

We stopped looking at what’s missing, but what’s there. We started loving each other again. Even more than before.

Their relationship dynamic swung back to the good ole’ honeymoon period, despite minor arguments from time to time.

Those only lasted seconds, if not minutes, as they reminded themselves that they chose to be together.

More importantly, enjoying each other’s presence in the limited time they had.

As you’d expect, the day finally came when his girlfriend felt bad about “cheating his feelings”, due to their “expiry date”.

She simply couldn’t bear the thought of him treating her so nicely, although she couldn’t promise him a future together.

4 months into their relationship, he wrote poignantly,

I guess I knew it too. We both knew it. It just wasn’t the same. But we both ignored those little things as we were not willing to bring it up.

His girlfriend asked for them to end the relationship there and then.

However, the writer – describing himself as a persistent guy – asked for one more day,

Dating proudly for the first time

Time was ticking away, as he realised their “8 months to go”, had been whittled down to just one day.

But upon revisiting their very first date, he found that some things had already changed.

Her parents knew about the date this time, and gave their blessings for them to spend a day together.

On a public holiday, they trekked back up to Genting — the place their relationship began. 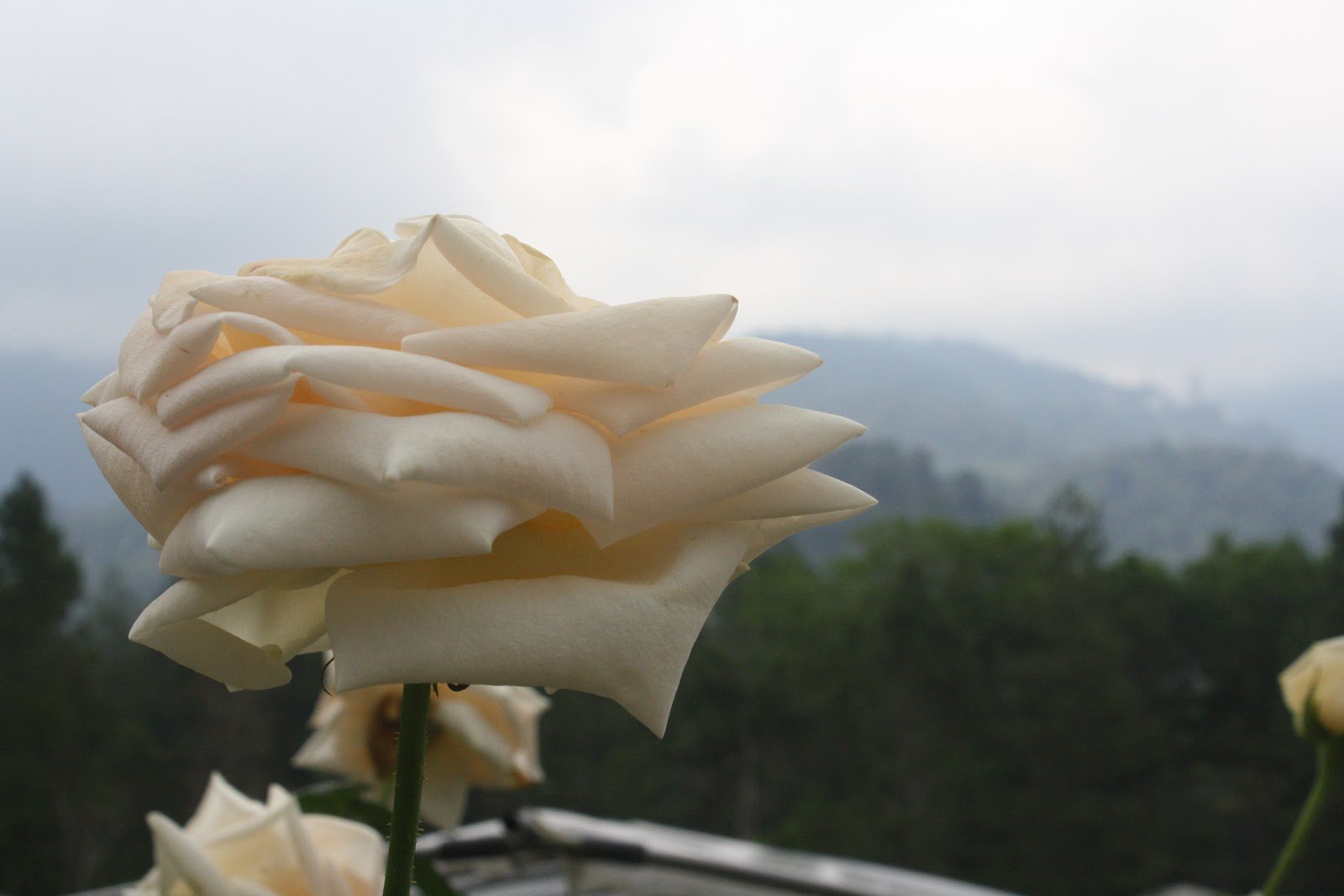 He presented her with a flower – a fresh unwilted rose – as they approached the same spot.

The writer then asked her to be his girlfriend again – to which she said yes – for the 10 hours they had left.

No tears left to cry

The couple did plenty with their limited time, celebrating future birthdays by “blowing bubbles off the mountain”.

And sitting on a bench while “munching on chocolate” for the Valentine’s Day they never got to spend together.

To commemorate a future anniversary that wasn’t to be, they watched a video compilation of their pictures which he stitched together.

Neither of them shed a single tear this time.

We were both impressed. I guess we had cried enough on the day we said we would breakup.

Since he couldn’t be her date to prom, they even held their own mini-prom that night.

Whisking her away to a fancy restaurant, he proudly paid for the meal – though she was “technically richer” – and “treated her like a princess”.

As the day came to a close, he read her a speech as they sat in his car.

She had taught him what love was, by bringing out only the best in him.

He hoped she’d never feel guilty about their relationship — he had no regrets for what they shared.

Then came the inevitable end and a tearful goodbye,

We kissed for the last time, and we bid farewell.

Being reminded that the relationship could end anytime, was “a game changer” for the writer.

He reflects that having “limited time” with a partner, is a concept that can be applied to every other relationship,

Rather than feeling unhappy about how our partners aren’t meeting our needs, time is better spent enjoying their presence.

Despite remaining envious of those in relationships without familial obligations, he concludes that true love gives.

And when both parties focus on giving, relationships are way more meaningful.

The takeaways from this writer’s impassioned account of his short-lived romance remain as clear as ever.

Treasure your relationships with everyone around you.

For love is a beautiful thing, but it does not always last forever.