Geylang is a favourite hot spot for many Singaporeans looking for a late night meal.

But recently, Singapore’s supper paradise seems to be attracting more than just visitors hoping to fill their stomachs.

In December alone, 2 violent fights have already occurred in Geylang. Coincidentally, the altercations also took place within close proximity of each other. 67.53 metres to be exact. Here’s what happened on both occasions.

On Wednesday (19 Dec), a video of a brawl was uploaded onto a Facebook group named 新加坡华人华语俱乐部, which translates to ‘Singapore Chinese Chinese-Speaking Club’.

Here’s the video in full, we also break it down for you after the jump.

In the 29-sec clip, 5 men were seen engaged in an aggressive brawl along a well-lit pavement. The men involved took turns to taunt each other in Chinese with the word ‘来’, which translates to “come”. 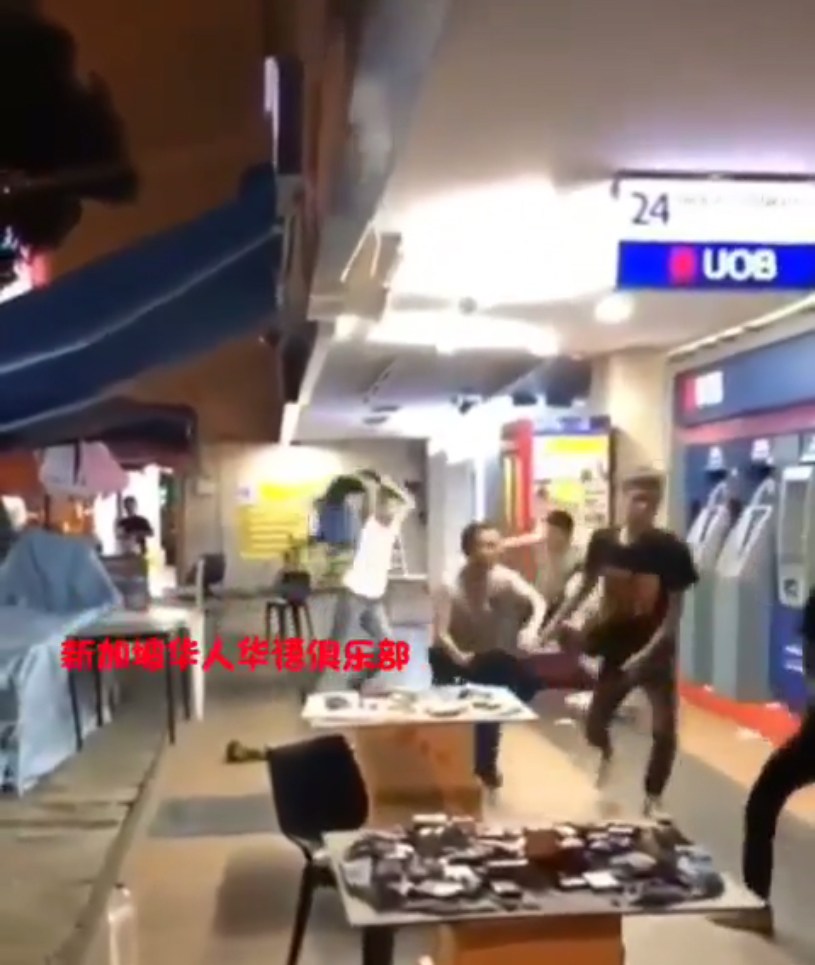 At the start of the video, a man appears to brutally slam a blue plastic chair into another man’s temple. Despite receiving a straight blow to the head, the man appears rather unfazed. He even manages to skillfully block the next blow using his leg. Another man wearing a black T-shirt then grabs a chair and attempts to strike the previous aggressor on the head. 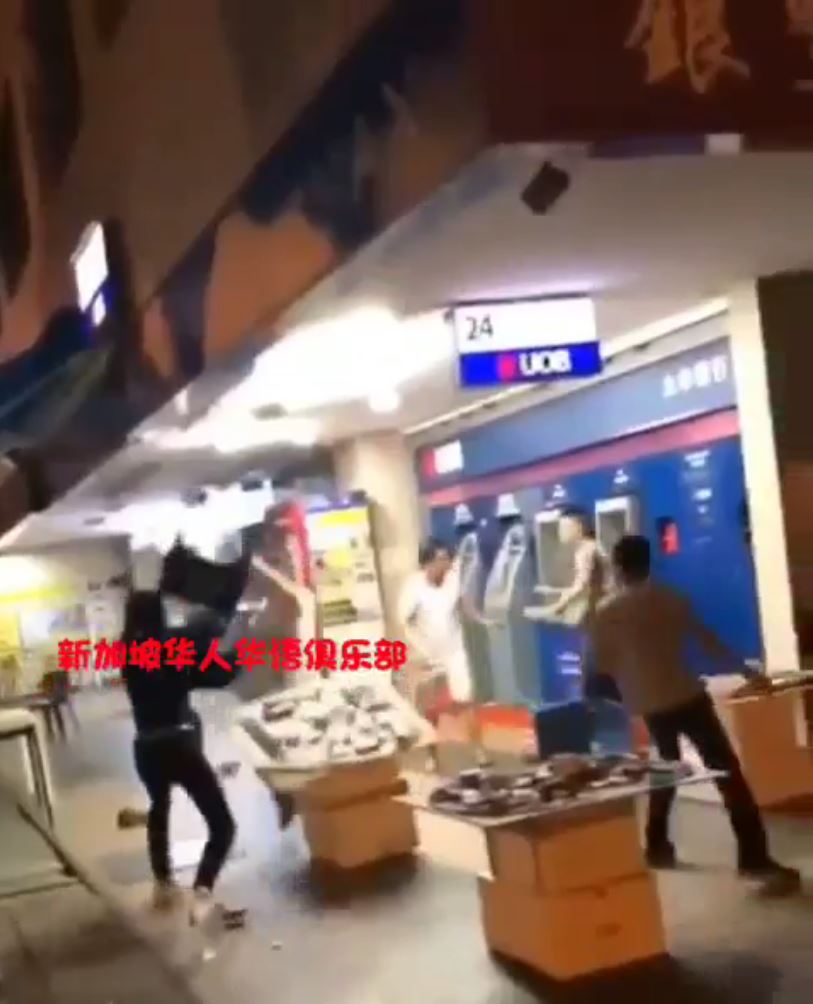 Miraculously, the man gets out of the way just in time, and immediately retreats from the fight.

But a plastic chair that was flung suddenly at the fleeing man, resulted in a direct hit near the end of the video.

The location of the fight wasn’t stated explicitly, but tapping into our CSI skills at MS News, we are fairly certain that the incident took place at the junction of Geylang Road and Aljunied Road.

For those unfamiliar with Geylang, peddlers selling various forms of sexual enhancement drugs can be seen throughout the day at this infamous intersection.

On the same day, another viral video featuring a fight in Geylang started circulating on Facebook.

MS News has contacted the person who uploaded the video for more information on when the incident occurred.

In this case, the weapon of choice was glass beer bottles.

Here’s the full video. Similarly, we break down the events – and a few figurative glass bottles – for you after the jump.

A man clad in a red and black-striped shirt is forcefully subdued by 5 men in a Chinese eatery, as the video begins. 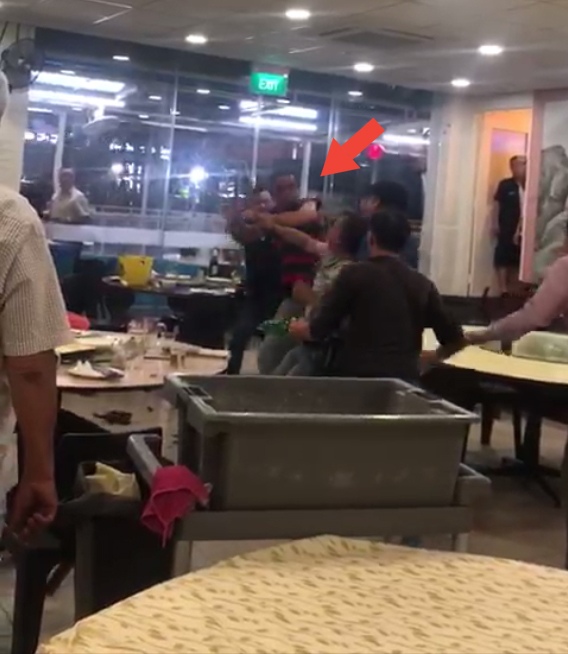 As he gets pulled away, another man grabs a glass bottle from a nearby table and smashes it violently on his head. 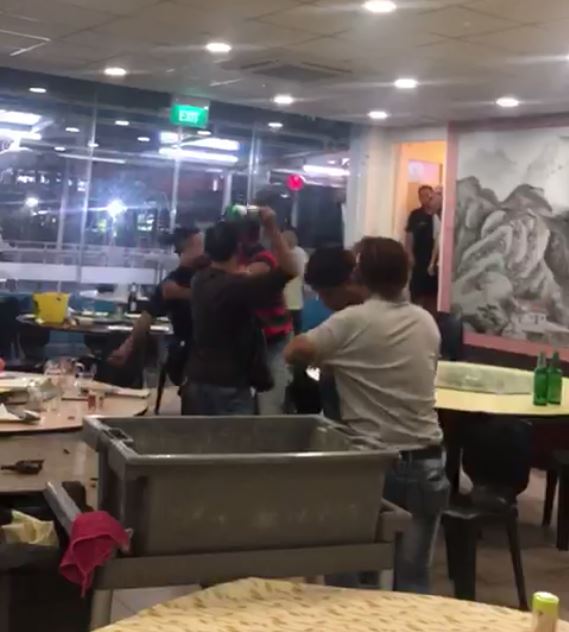 2 staff members in blue with festive Christmas hats then stepped in to try breaking up the fight. 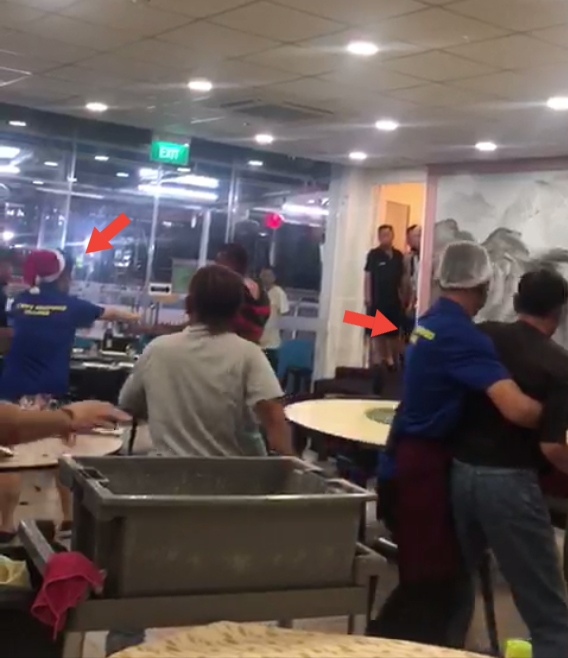 As two of the aggressors were being dragged away, another man dressed in beige grabs a bottle on the table and hurls it at the injured man.

Fortunately, the bottle misses him narrowly and ends up smashing upon impact on the wall behind.

Visibly stunned, the lone man instinctively picks up a brown bottle from the table behind and attempts to exact revenge on the man in beige.

By then, the fight was largely over and the man in red and black was left standing awkwardly in the middle of the room. 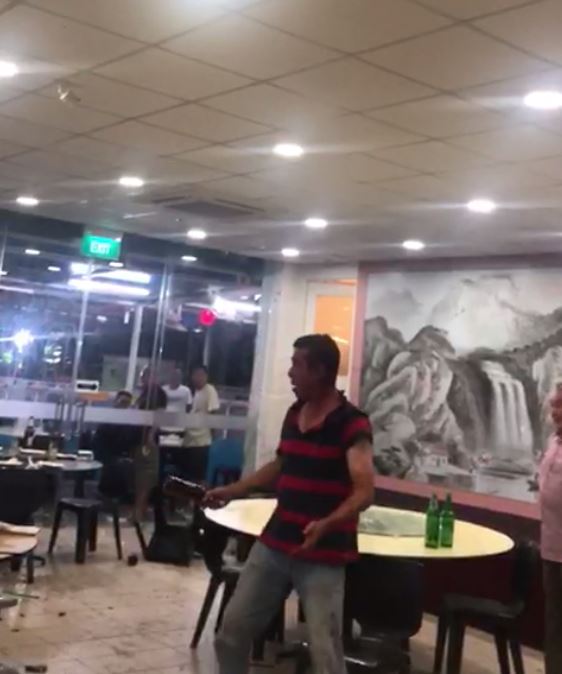 The fight in this instance occurred at Happy Seafood Village, a seafood restaurant just 67 metres away from the previous fight. 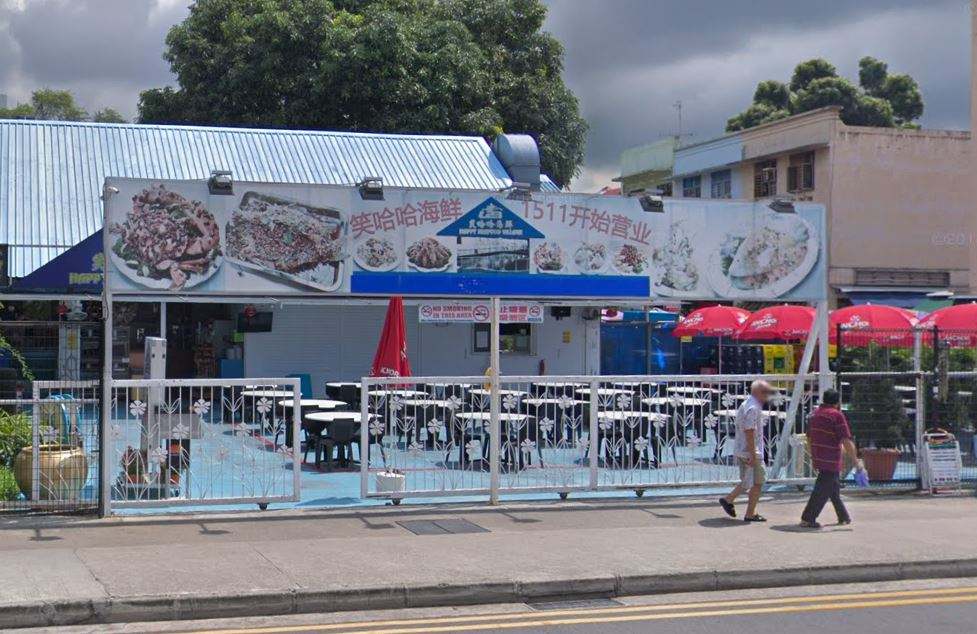 While recent fights certainly won’t be enough to deter true foodies away from visiting  Geylang – the Mecca for all things supper-related – let’s all remember to stay safe while we feast.

Should you ever witness a public brawl, do alert the Police and other members of the Civil Defence Force immediately.