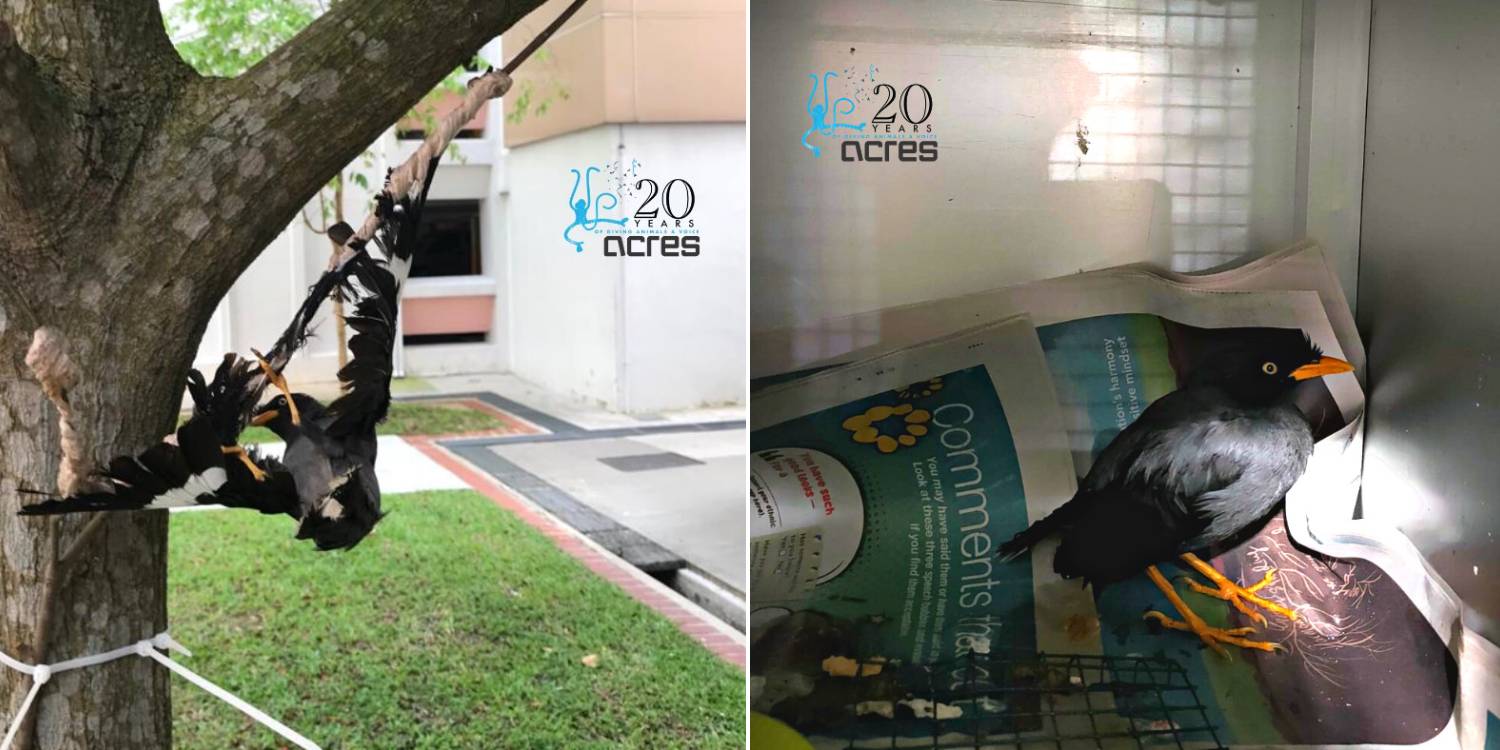 The incident took place on 20 Oct.

ACRES Appealing For Information After Mynah Gets Trapped On Glued Twig

Birds are a prevalent part of the wildlife in our urban jungle. But sometimes people will place nefarious traps to capture birds.

While the reasons for these are often unknown, it amounts to cruelty.

ACRES rescued a mynah that was stuck to a glued twig at Choa Chu Kang after receiving a call from the public. 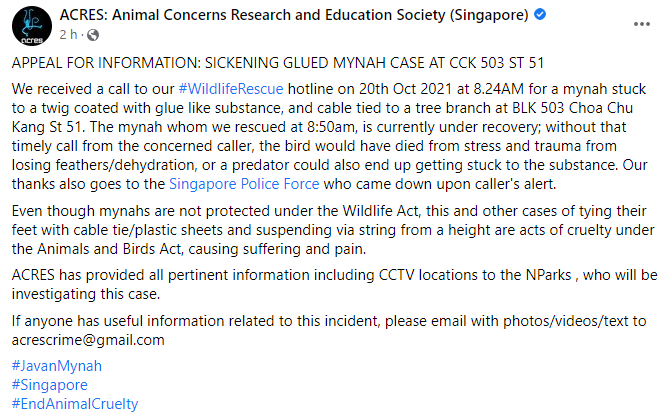 Luckily, the mynah is currently recovering. However, ACRES is now appealing for information on the incident.

At 8.24am on Wednesday (20 Oct), ACRES received a call from a member of the public regarding a mynah stuck on a seemingly glued twig at Block 5603 Choa Chu Kang St 51. 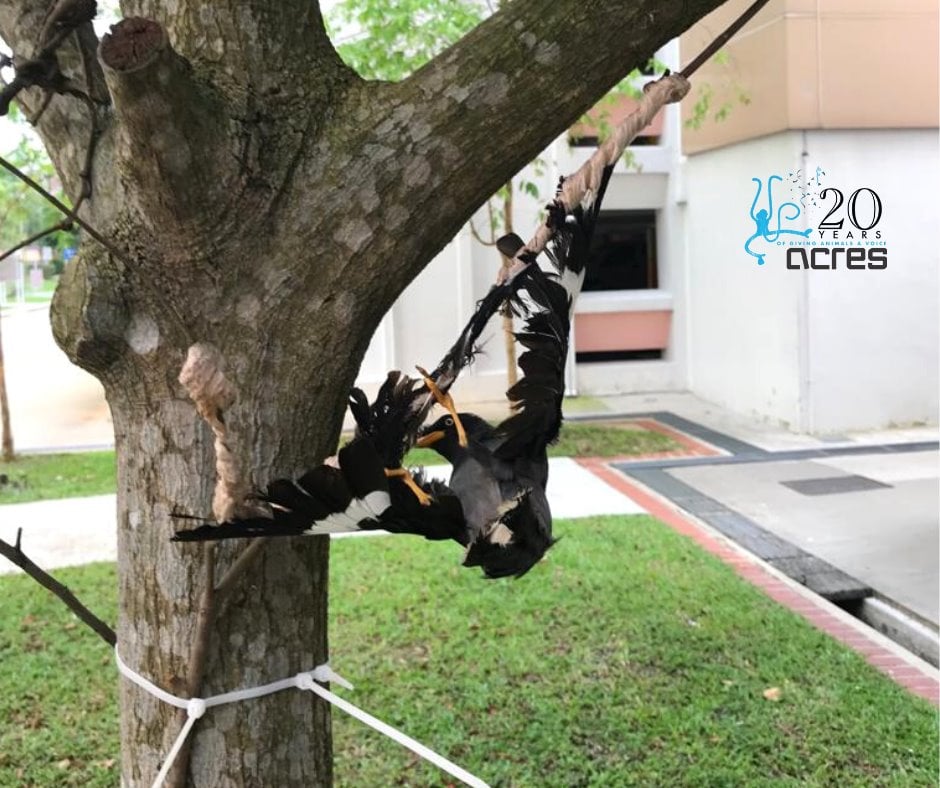 The mynah was also stuck on a cable tied to the tree branch. 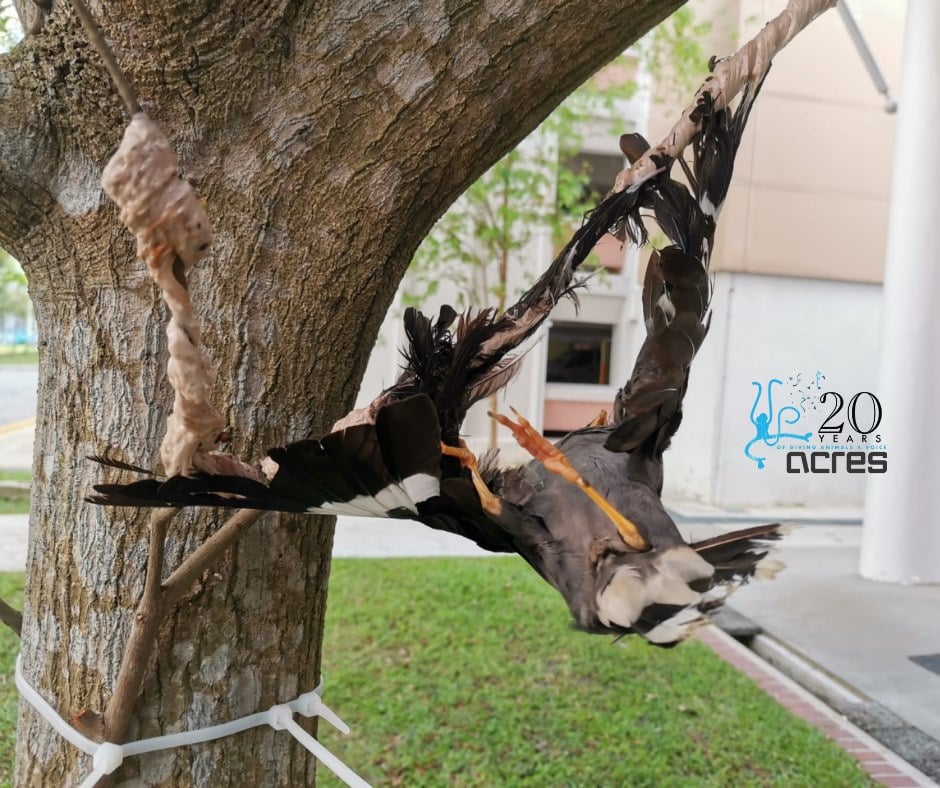 ACRES managed to rescue the mynah by 8.50am and it’s currently in recovery.

It stated that if not for the timely call, the mynah might have passed on from stress and trauma from losing its feathers. It might have become too dehydrated as well.

In an image, the mynah looks happier, healthier, and might we say chirpier than the day before. Although mynahs aren’t protected under the Wildlife Act, the incident is still covered under the Animals and Birds Act as it caused suffering and pain to the bird.

According to ACRES, NParks will investigate the case.

If you have any information about the case, do email with photos, videos or text to acrescrime@gmail.com.

Gluing a twig in the apparent hope of catching a bird in it is nothing short of cruel.

We hope that a thorough investigation will reveal the culprit and that they are punished accordingly.

While the mynah might have been lucky this time as it was rescued in a timely manner, others may not be so lucky in the future.

As such, catching the perpetrator will be of high priority.