Remember how angry you were when you heard that Uber was pulling out of Singapore?

Now it’s time for sweet, sweet revenge. The Competition and Consumer Commission of Singapore (CCCS) has fined both companies a total of $13 million for their move. The fine was announced on Monday (24 Sept).

And to add to the good news, CCCS has instructed Grab to retain its pre-merger pricing algorithm. This means we could enjoy lower fares in the near future, since CCCS alleges that fares have increased by up to 15% since the Grab-Uber merger.

And then there was the issue of exclusivity. Grab has imposed exclusivity obligations on taxi companies, car rental partners as well as some drivers. This prevents competition by making it difficult for competitors to scale and expand in Singapore.

CCCS has instructed Grab to remove such arrangements with taxi fleets.

Grab will also not be able to buy Lion City Rentals or its vehicles from Uber without CCCS’ permission. The car rental company is a subsidiary of Uber.

Mergers that substantially lessen competition are prohibited and CCCS has taken action against the Grab-Uber merger because it removed Grab’s closest rival, to the detriment of Singapore drivers and riders.

Grab responded to the CCCS’ directives and will be accepting them in full. But it protested at the CCCS’ “inappropriately narrow definition of the market”.

It also denied that it had raised fares since the deal. The operator also wants exclusivity conditions applied to all transport players, including taxi operators.

Here is a statement from Mr Lim Kell Jay, the head of Grab Singapore: 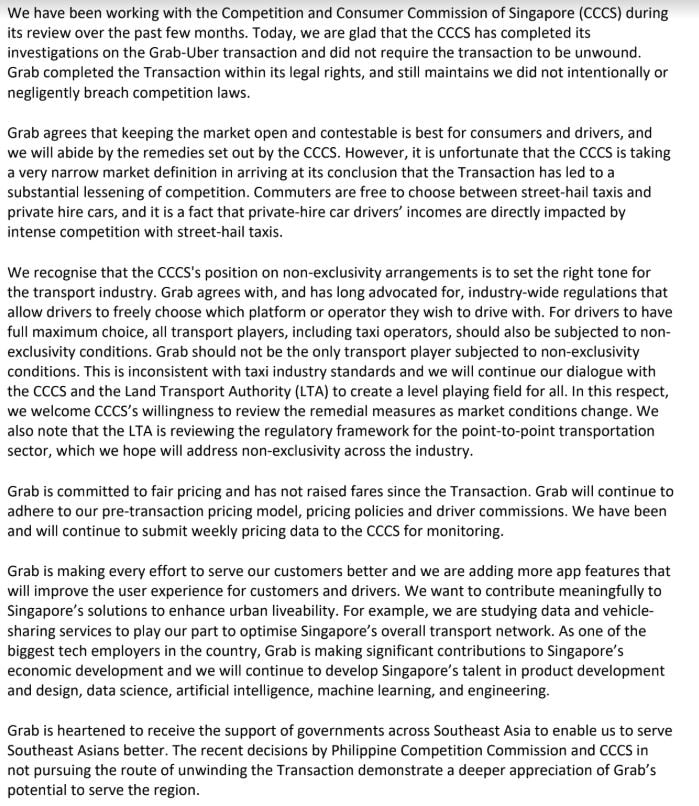