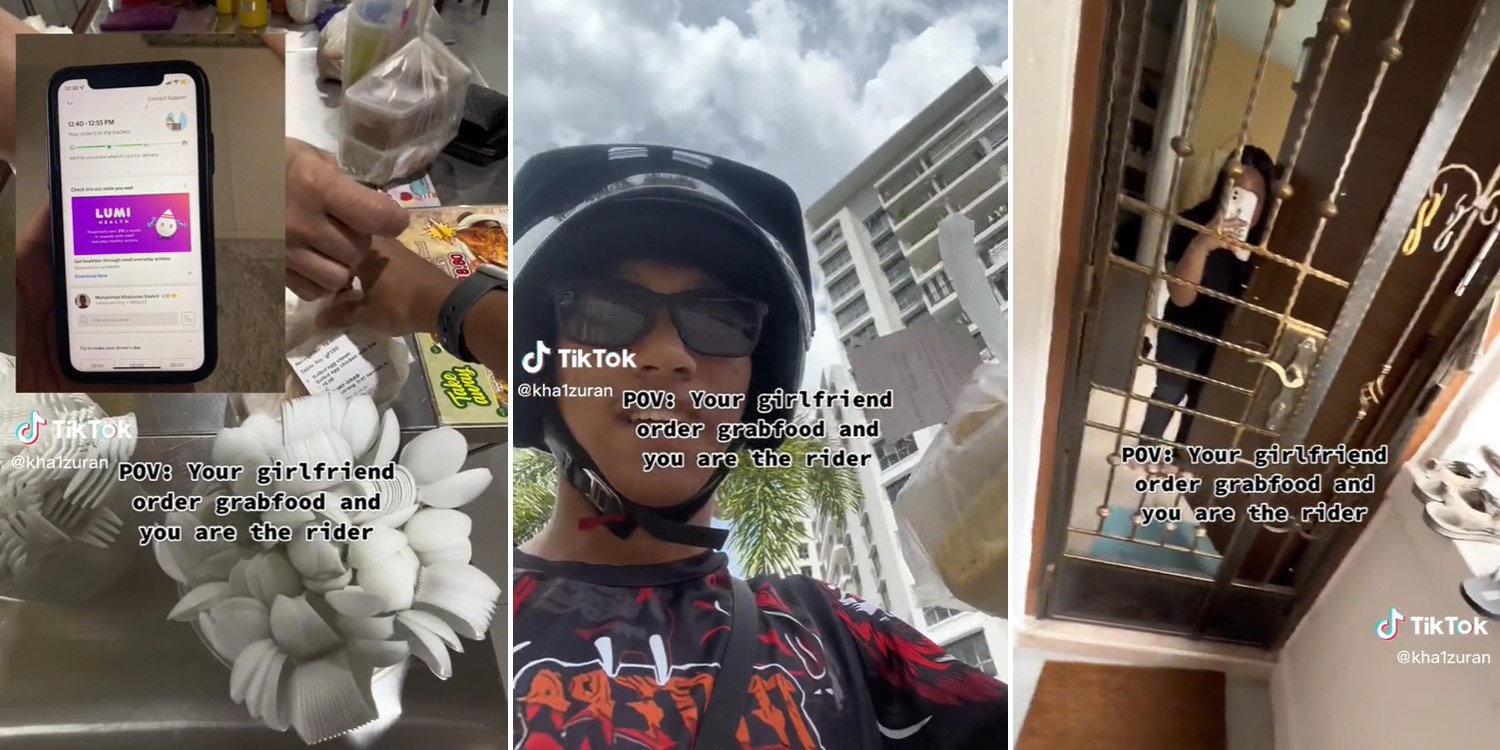 Seeing a delivery rider we recognise knocking at our door is probably a prospect that has crossed some of our minds.

But it became a reality for a woman in Singapore when her allocated GrabFood rider turned out to be her own boyfriend. The rider recorded the experience, including his girlfriend’s gleeful reaction upon her discovery.

He received a generous S$10 tip for his efforts, though what he gained more of were probably likes and comments on his now viral TikTok video.

Khaizuran, who goes by @kha1zuran on TikTok, posted a 32-second clip about the wholesome encounter on 21 Dec 2022. 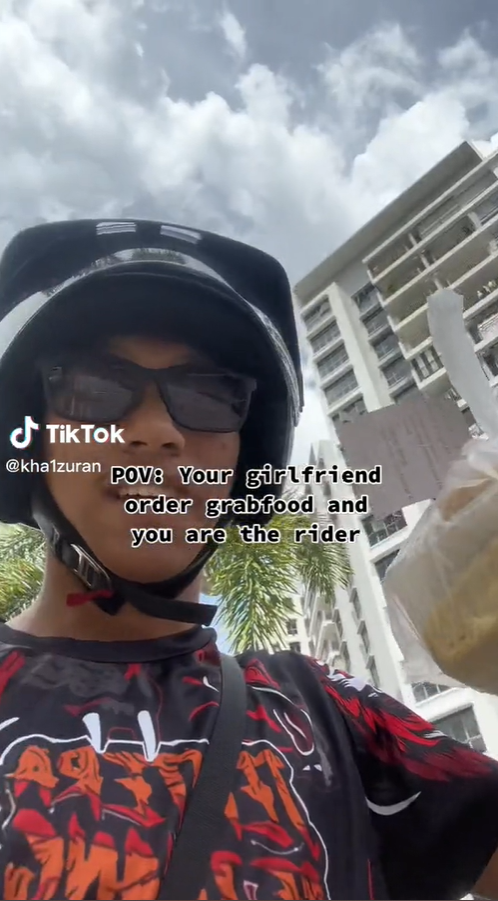 The video started with him collecting his girlfriend’s order from an eatery.

An attached screenshot showed details of the order on her phone, with his name clearly listed as the selected rider. 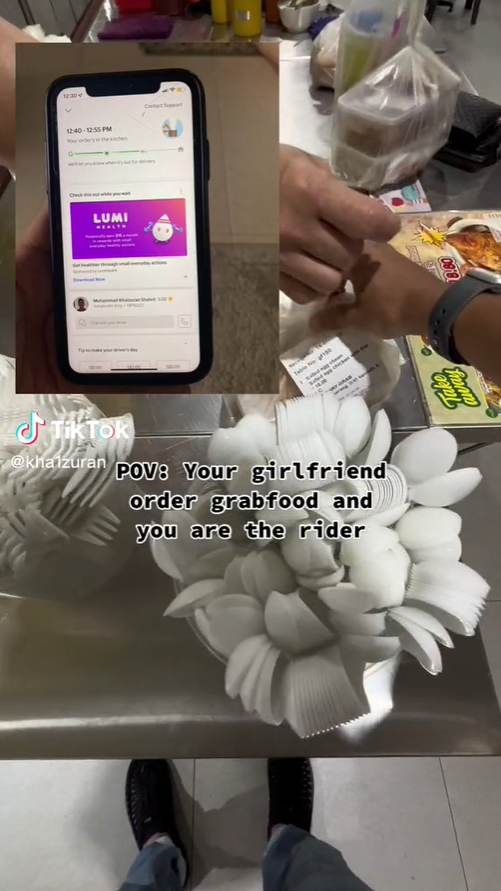 On the way to her unit, he held up the food and shouted, “Girlfriend, I’m coming, wait for me, girlfriend!”

Once he arrived at her door, he called out for her and rang the doorbell.

Khaizuran didn’t have to wait for long, as his girlfriend answered the door while filming him and giggling. Pointing to the S$10 note in her hand, Khaizuran marvelled at it, saying, “Whoa, got tip already sia.”

Thanking him, she gave him the note, to which he cheekily responded, “S$10 only ah?” 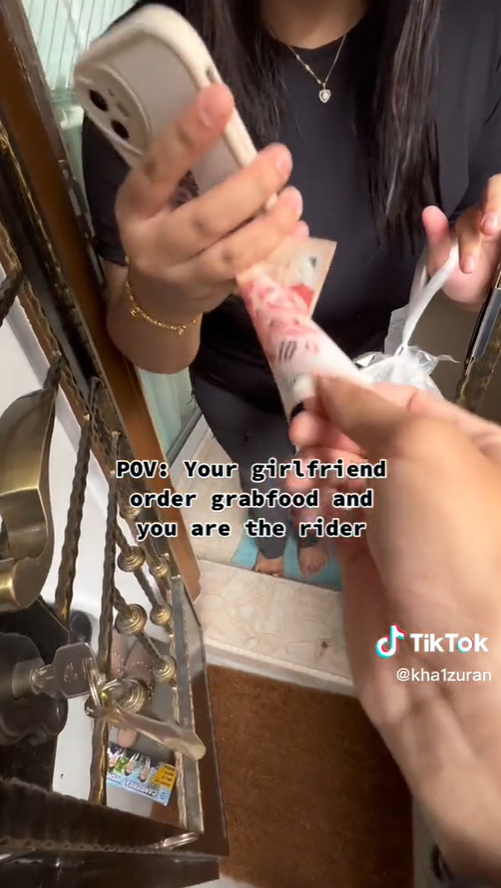 The video ultimately ended with him bidding her farewell and going about his day.

Recorded moment to keep as a memory

Speaking to MS News, Khaizuran shared that he received the order when he was on his way to Northpoint City in Yishun.

As it was at a restaurant his girlfriend frequented, he checked the customer’s details. Her name and address matched, causing him to realise that the order was for her.

“I was smiling the whole time,” he reminisced. “What a coincidence to send my girlfriend [her] order.”

On the way to the eatery, he asked her if she had ordered the food. When she confirmed that she had, he told her that he was her rider.

“I told her jokingly to standby at her doorstep,” he quipped. “Make sure to give me tips.”

Upon reaching the restaurant, Khaizuran began the recording as a keepsake of the wholesome coincidence.

When he eventually delivered her order, they were overwhelmed with laughter.

“We both talked about this before,” Khaizuran told MS News. “What if one day I was assigned to deliver my girlfriend’s order, and that day came!”

A memorable experience for GrabFood rider

Khaizuran was surprised when his video started trending on TikTok.

“We didn’t expect it to be this huge,” he confessed. Their friends expressed their envy at the encounter, jokingly asking for their own GrabFood rider as well.

Ultimately, it was a rather memorable experience for Khaizuran and his girlfriend, adding a significant chapter to their relationship.

“[It] will be in our memories forever,” Khaizuran said. “We’re just so happy to be blessed with this.”

Sweet moments such as these do prove one thing — it’s the little things we do for our partner that matter.

Here’s to wishing the happy couple all the best. And for those of us still mourning our single status, it might be time to start ordering from GrabFood in bulk.