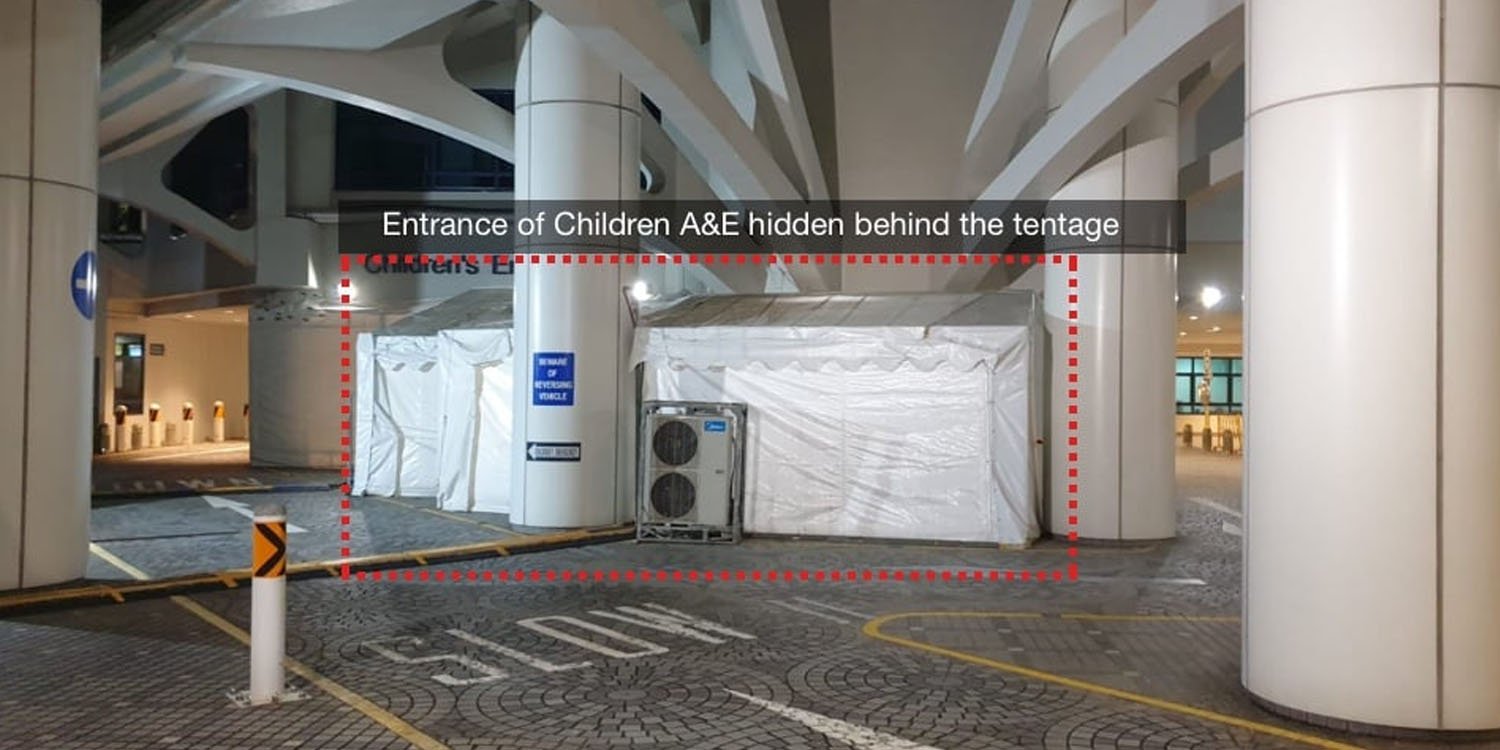 UPDATE (22 Sep, 12.07am): KKH has responded to the mother’s feedback, saying they are reviewing ways to improve their directional signage. You can read their full statement below.

During a loved one’s most critical moments, the journey to the hospital must be as swift as possible because every second counts.

Even the smallest of things could make a difference in saving lives.

A mother in Singapore recounted how her rush to KK Women’s and Children’s Hospital (KKH) with her 11-year-old son was hindered by a security barrier and an obscured children’s A&E entrance. 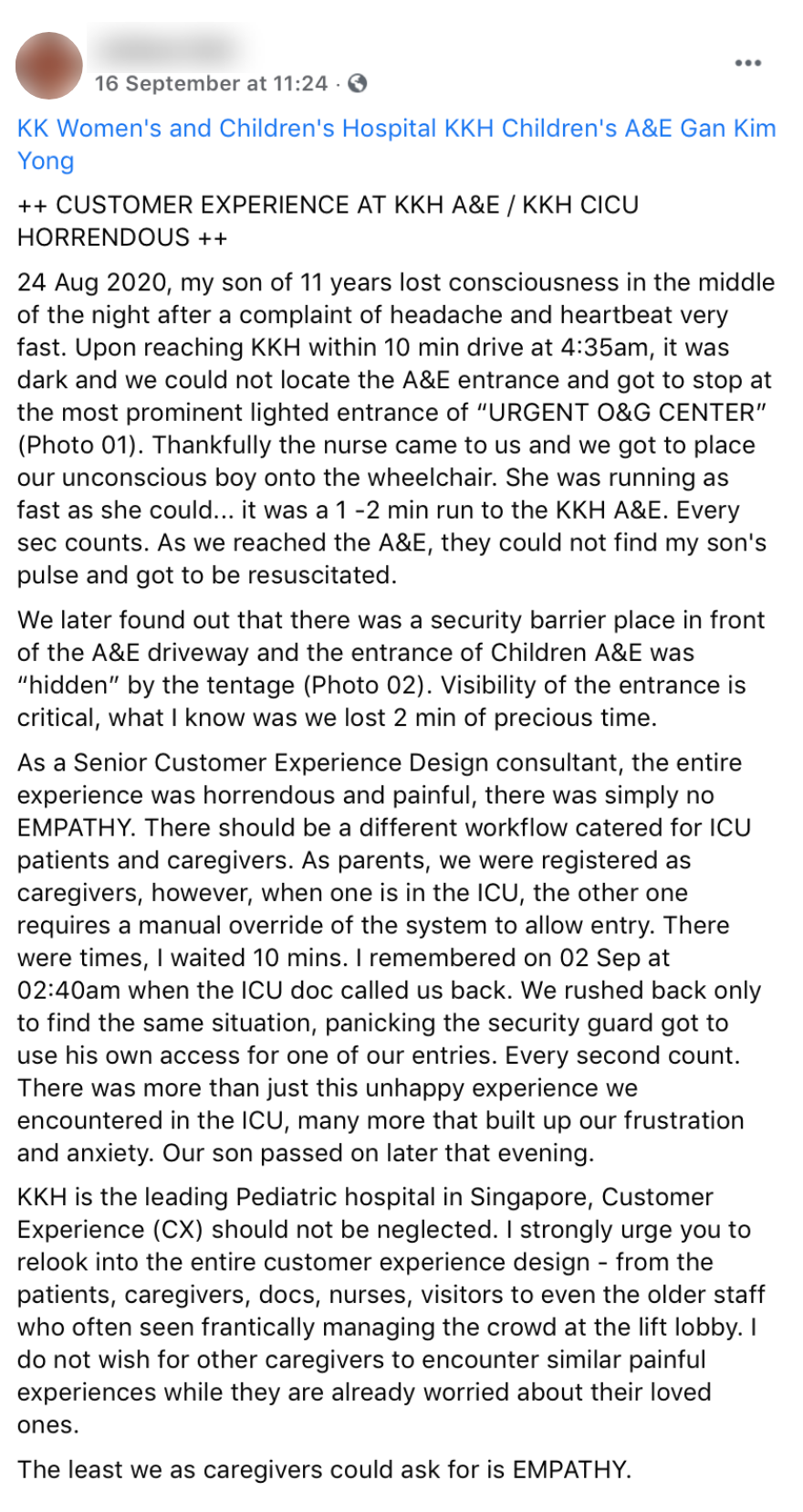 They ended up getting off at the wrong place.

She stressed that visibility of the A&E entrance is highly critical, because the rush to the right entrance took 2 minutes of precious time away from her son’s treatment.

In her Facebook post on 16 Sep, the woman’s son complained of a headache and racing heart in the middle of the night, spurring her to rush him to KKH on 24 Aug.

However upon reaching the hospital at about 4.35am, the woman couldn’t locate the A&E entrance. 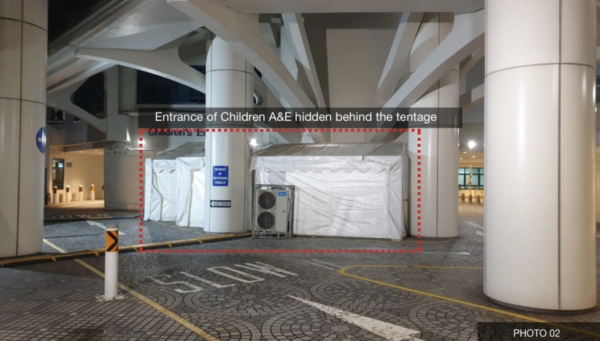 She added that the hospital environment was dimly lit.

In a bid to get her son treated as quickly as possible, she drove to the most brightly lit entrance, which was the Urgent Obstetrics and Gynaecology Centre. However, the centre takes care of pregnancy-related problems.

According to the mother’s post, a nurse assisted her to rush her unconscious son to the A&E, which was a 1-2 minute run away.

The woman detailed that hospital staff could not find her son’s pulse and had to be resuscitated upon reaching the A&E. Sadly, on the evening of 2 Sep, the boy passed away.

The mother found out that the entrance to the A&E was blocked by a security barrier while the A&E was obscured by tentage. 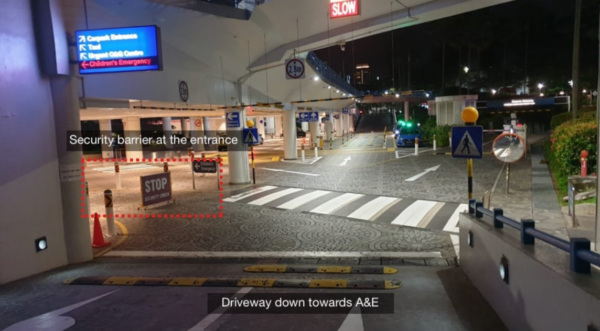 As a result, she missed the A&E and lost precious time. The mother added that the time lost could have been critical for her son’s survival.

Visibility of the entrance is critical, what I know was we lost 2 minutes of precious time.

Following the ordeal, the woman said that she wouldn’t want fellow parents to have a similar experience as her. 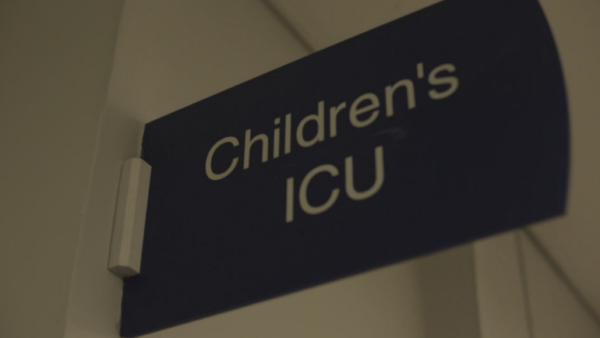 Furthermore, she said that KKH should look into the way they handle incoming patients.

KKH is the leading PAEDIATRIC hospital in Singapore, Customer Experience should not be neglected.

He mentioned that when the woman arrived at their O&G centre, hospital staff was prompt in transferring her son to the children’s emergency room where he was given immediate medical attention.

No matter, they are currently reviewing ways to enhance their directional signage leading into the hospital.

Regarding the woman’s concerns of visitations at the ICU to see her son, Mr Goh explained that heightened measures have been in place due to Covid-19 pandemic in Singapore, for the safety of patients and visitors.

These measures, including the visitation policy, are in line with existing Covid-19 guidelines.

While we had made exceptional provisions to CICU visitation in light of the condition of Ms Goh’s son, we do acknowledge that our communication can be improved.

Mr Goh added that KKH offers their deepest condolences to the woman’s family. The hospital has been in touch with her and her family to address their concerns.

Our condolences to the boy’s family

It is saddening that a mother has to endure the loss of a child. But we can only hope that other parents will not have to face a similar experience.

MS News extends our condolences to the boy’s family.