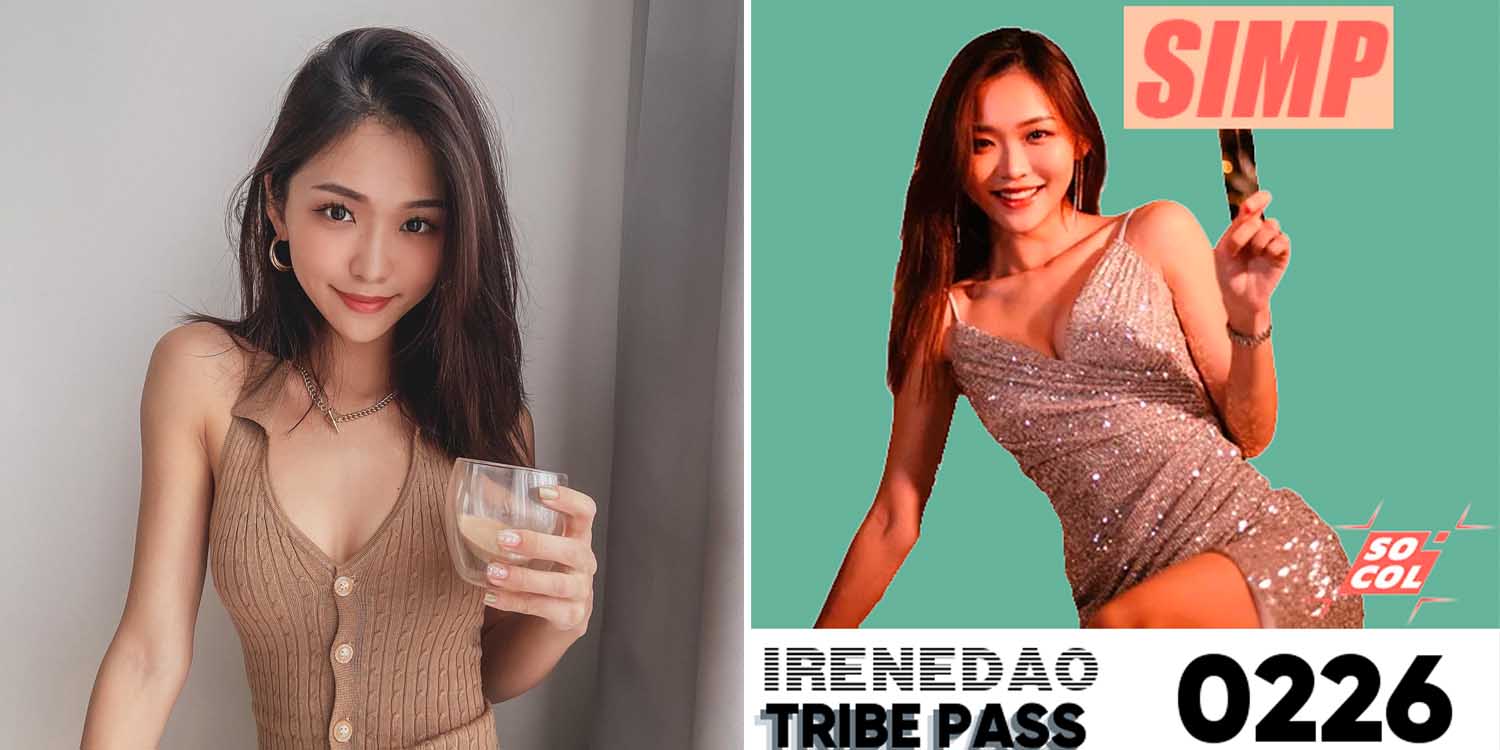 The collection spawned from her Telegram sticker pack.

You might not be a player in the cryptocurrency world, but you probably have heard of Non-Fungible Tokens (NFT), or the individuals who have made it big selling their own collections.

Spawned from her Telegram meme sticker pack, the collection of 1,106 images featured her with texts like “Shut up”, “Take My Money”, and “Simp”.

Within 10 days of selling her NFTs, the collection generated S$7.5 million in sales.

On 14 Jan, Irene Zhao, together with her business partner Benjamin Tang, launched the collection on NFT marketplace OpenSea.

The collection of 1,106 memes was done in the same simplistic style– a mint green background with a superimposed picture of her, a banner that reads “IRENEDAO TRIBE PASS”, together with meme slang text used by members of the crypto community. The most expensive NFT priced at 69 ETH is one that features Irene clad in a bikini with the text “gm” or “good morning”. 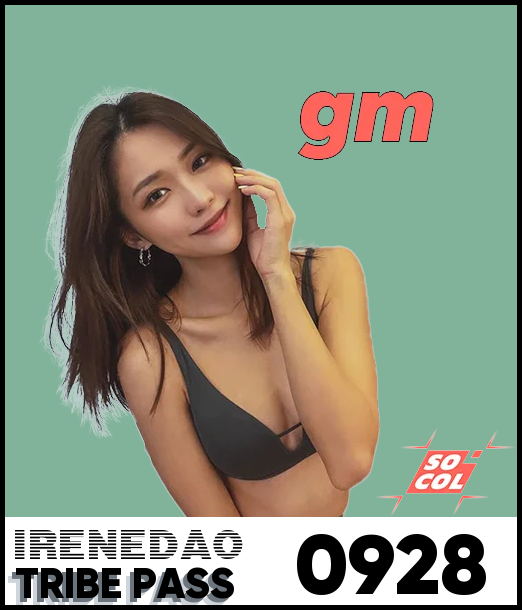 According to Cointelegraph, Irene and business partner Benjamin Tang initially had the idea for “So-Cal”, short for social collectables.

It is a platform that aims to help content creators monetize their content whilst connecting with their fans.

The pair branded So-Cal as a “decentralized version” of OnlyFans, Discord, Twitch, and Patreon.

Irene then created a Telegram sticker pack for her fans which quickly gained popularity. A fan later suggested she mint them as NFTs.

Within days, Irene tokenised the stickers into 1,106 NFTs. 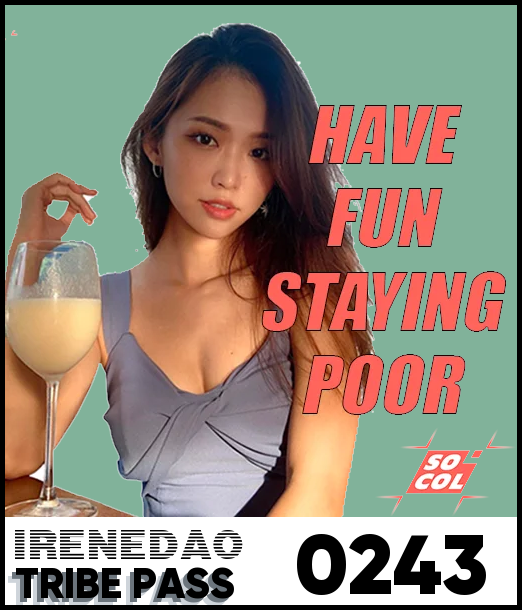 Despite the success of the project, Irene, who recently left her job as a commodity broker to pursue a career in the crypto industry, is supposedly not profiting from it.

Instead, the money is funnelled into the IreneDAO community to experiment with ways of integrating Web3 into the creator community.

The idea for IreneDAO, where an Internet community shares a crypto wallet, is an extension of So-Cal.

According to Irene, IreneDAO’s slogan is SIMP, which stands for ‘Simplicity, Integrity, Meaning, Purpose’. 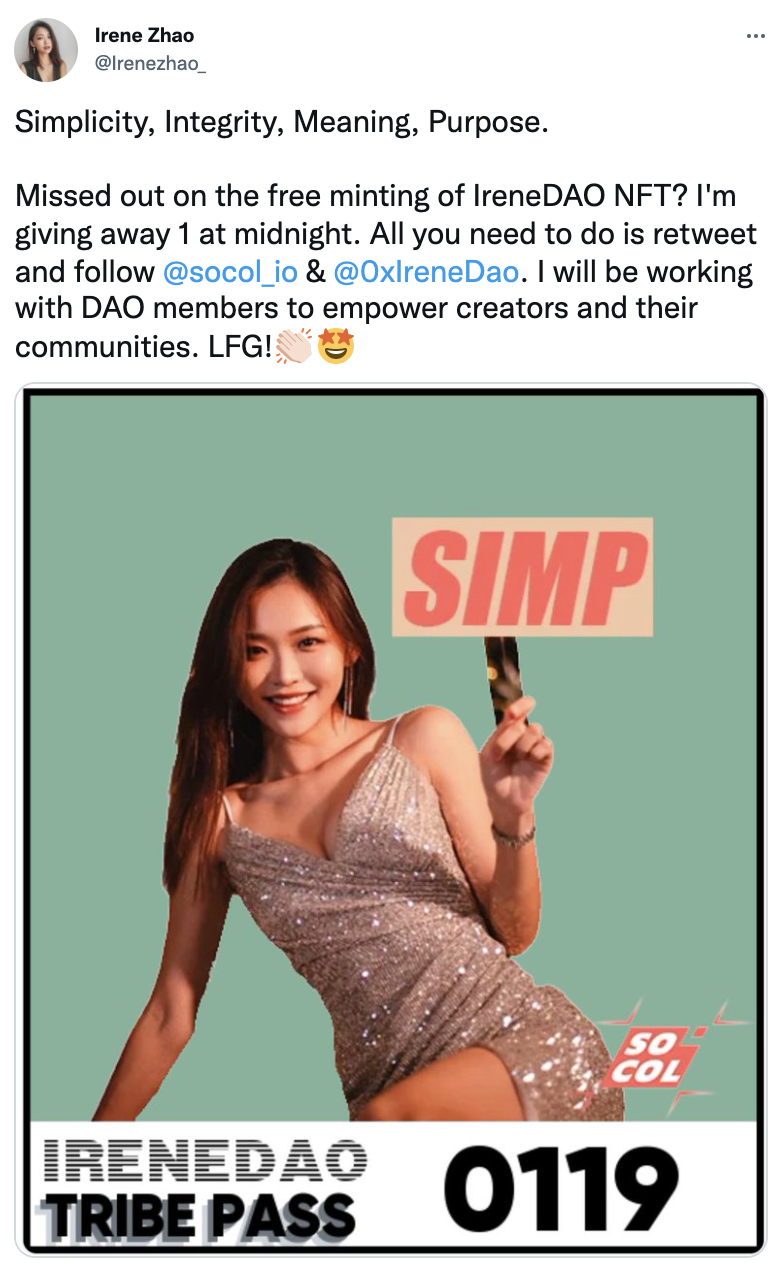 As for those under the impression that the collection is but a “fluke”, Irene explained that NFTs like these allow creators to own their own content.

Followers can then buy a share of that ownership and reap the rewards of it.

The idea was apparently inspired by Irene’s own journey of being an influencer and having to rely on sponsored posts to make a living.

Making waves in the crypto world

It’s amazing how Irene’s career as an influencer and interest in cryptocurrency has led her to make waves in the crypto world.

What do you think of Irene’s collection and her aspirations for creators to regain control of their content? Let us know in the comments below.

Featured image adapted from @b1gqing on Instagram and IreneDAO on OpenSea.