When approached by insurance agents on the streets, most of us turn them down without even hearing them out.

Why is that so?

Because there is simply no trust between us, which take years to establish.

That’s why many of us purchase our insurance policies from people we’re familiar with, knowing that they’ll be there when we need them most.

But netizen Yvonne Peh had her trust in her service provider broken,  after her insurance agent MIA-ed while she was going through some difficult times.

Ms Peh allegedly purchased all her insurance policies from her friend, Ms Ang.

This included hospitalisation and rider policies for her 3 children.

Kayden, one of Ms Peh’s children, was found to be developing at a slower rate, but doctors at KK Hospital were hesitant to make a diagnosis.

Feeling that something was amiss, Ms Peh and her family sought a second opinion at the National University Hospital (NUH) in January.

Ms Peh allegedly called and messaged Ms Ang informing her about her son’s admission, but her replies were slow. As a result, her claims couldn’t be claimed till date.

After 6 months of waiting, Ms Peh decided to change her insurance agent.

On 7 Sep, Kayden was admitted to Thomson Medical Centre (TMC) due to a prolonged fever.

Ms Peh found that her filing couldn’t be processed over the counter, and had to call her current agent down to help with the admission.

To make things worse, Ms Peh’s new agent received calls from the claims department – presumably from her previous insurance company – requesting Ms Peh to change hospitals, due to some complications.

This allegedly left Ms Peh with bills amounting to more than $7,000 that weren’t claimable. This essentially meant that Ms Peh’s monthly premiums had been for nothing.

As of the time of the Facebook post, Kayden is currently seeking treatment at NUH with no indication of when he would be discharged.

Bringing dao to a new level

In addition to her Facebook post, Ms Peh uploaded several screenshots of their conversation showing how she was ignored repeatedly over the months.

We will not presenting every one of her screenshots, but here’s a look at two occasions when she was dao-ed

In January this year, Ms Peh’s family were considered seeking second opinions at NUH, after having a strong hunch that something was amiss with Kayden. 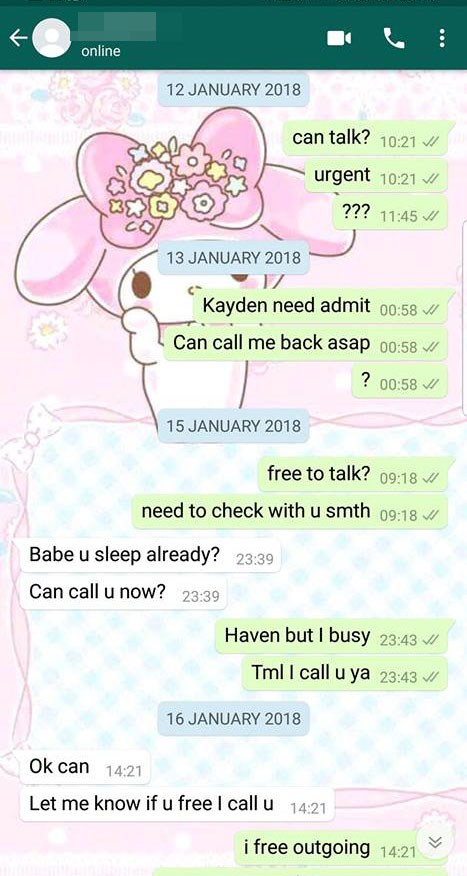 They decided to admit Kayden into NUH for scans. Before that, Ms Peh attempted to contact her insurance agent, who took nearly 4 days to reply her. 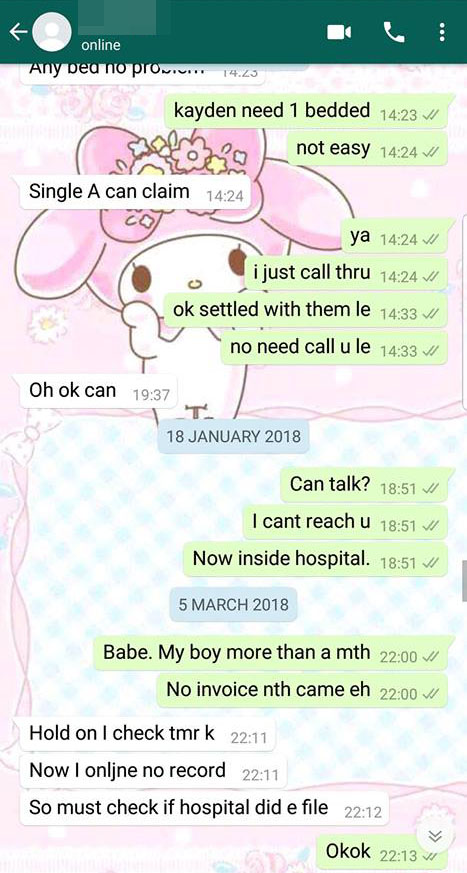 On 7 Sep, Kayden was admitted into TMC due to a prolonged fever. However, she soon found that the filing could not be done in TMC.

Ms Peh was presumably in a state of panic, and attempted on numerous occasions to contact her Ms Ang. 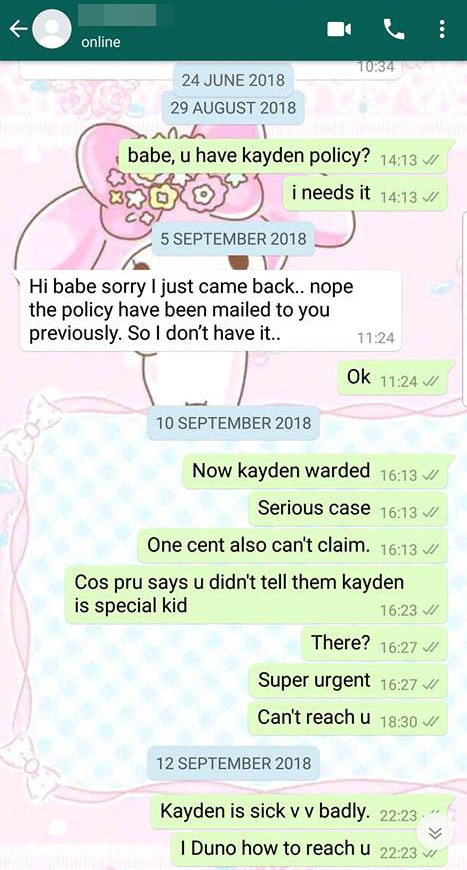 Ms Peh attempted to contact Ms Ang again, but was given the silent treatment, despite a barrage of text messages sent Ms Ang’s way. Kayden was later diagnosed with Joubert Syndrome on 18 Sep.

When she eventually replied, Ms Ang claimed that she had been away without her phone.

She also attempted to initiate a phone conversation with Ms Peh, but this presumably didn’t come to fruition, as seen from the messages. 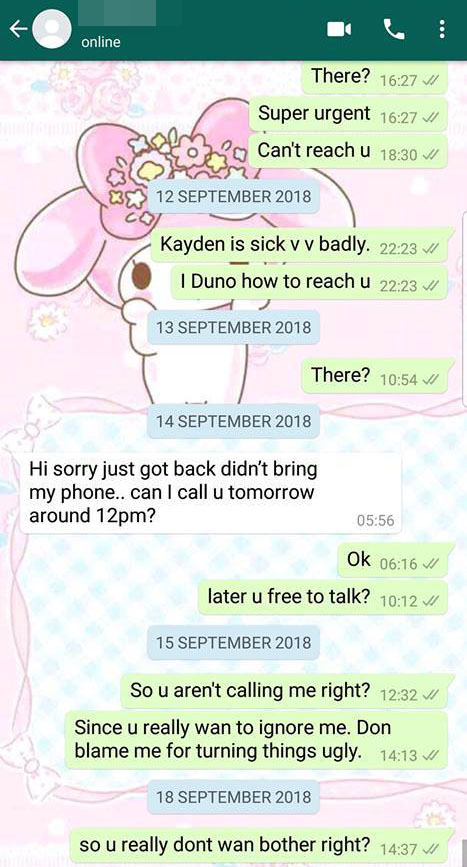 By now, the gist of the story should be more than apparent. But if you wish, you can view all the screenshots here.

As damning as the evidence may seem, let’s avoid jumping to conclusions as this is still a one-sided story. We’ve reached out to the insurance agent in question for comment.

Putting all things aside, we hope the two parties find a resolution to their dispute soon.

We also hope that Kayden will be able to access the treatment he requires as soon as possible, and begin on his path to recovery.