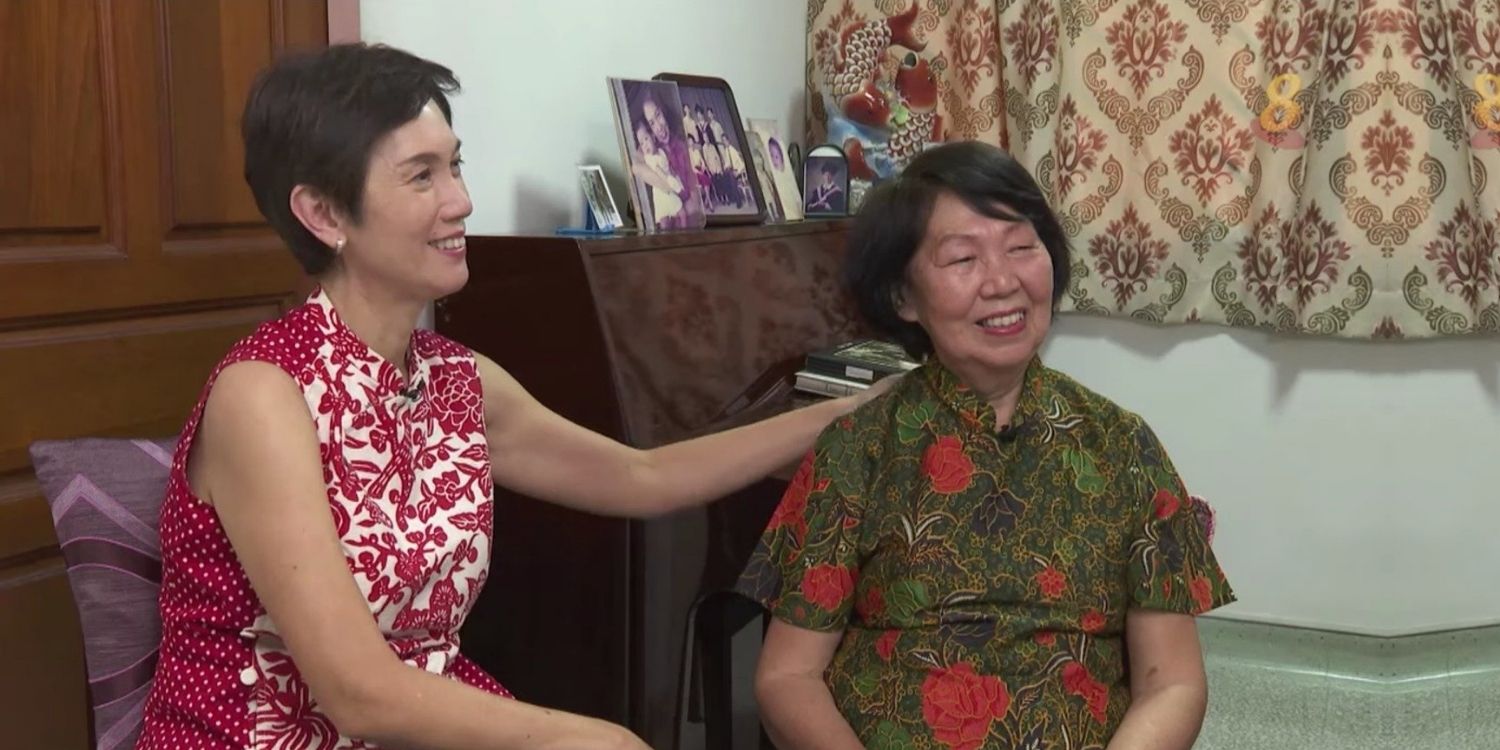 She said nothing can replace the special relationship between a parent and a child.

Being a parent isn’t easy. From looking after them when they are kids to ensuring that they grow up and become decent humans — your entire life revolves around them once you’ve given birth.

It is hard enough for ordinary folk to be parents, but perhaps the task gets even more challenging when you are in public office.

Recently, Minister for Communications and Information Josephine Teo shared her experience of growing up in the care of her mother and grandmother, as well as her thoughts on parenthood during an interview with Channel 8.

In addition, Mrs Teo also penned a Facebook post for Mother’s Day, thanking her mother for always being there for her, even when she entered politics. 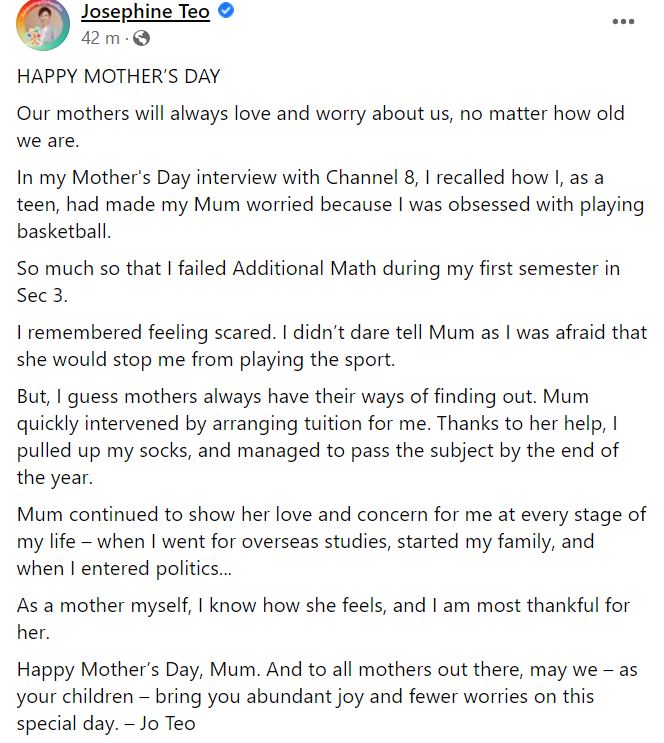 We look back on Mrs Teo’s life and how her relationship with her mother helped form the solid foundation of motherhood after she started having kids of her own.

The Channel 8 interview introduces Mrs Teo’s mother, 80-year-old Madam Liao, who started working in the police force when she was 20. She continued working even after giving birth and went on to serve the force for more than 25 years.

As such, Mrs Teo only started living with her mother from the age of 15, as she was brought up by her grandmother prior to that. Thanks to that, she managed to pick up cooking skills from her grandmother and mother. 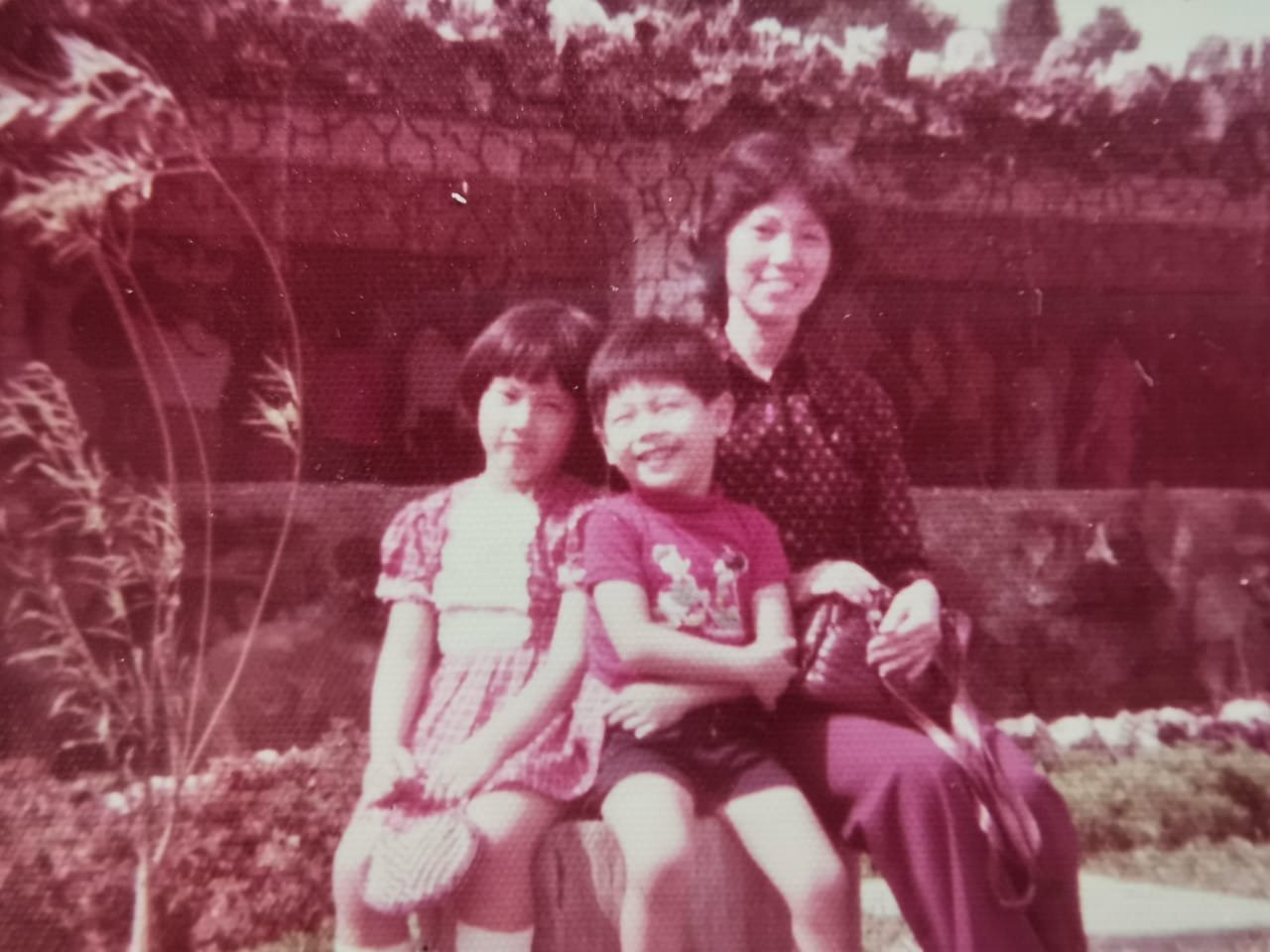 Madam Liao had a simple, but no-nonsense parenting style. She would tell her children what she expected of them, and they would have to do their homework. “If they didn’t finish their homework, they would not be allowed to sleep,” she said.

Apart from Mrs Teo, Madam Liao has two sons. She shared candidly that she would not have been able to bring up her three children without help from her mother, referring to Mrs Teo’s grandmother.

Madam Liao described Mrs Teo as a born leader who led her two brothers with aplomb.

Mrs Teo then credited her mother for this, saying her mother set a “very good example” with her strict and firm parenting style. She also remembers Madam Liao saying, “there is a limit to my patience”.

Thankfully, Mrs Teo and her two brothers understood that their mother’s job was not easy, involving shift work. So they tried to give her an environment where she could come home and rest after a long day at work.

Thanks her mum for being there for her

What helped was that Mrs Teo was always independent and did not need to be fussed over, said Madam Liao.

It also helped that Madam Liao’s mother was able to help take care of her granddaughter. Thankfully, the parenting styles of her mother and grandmother meshed perfectly. 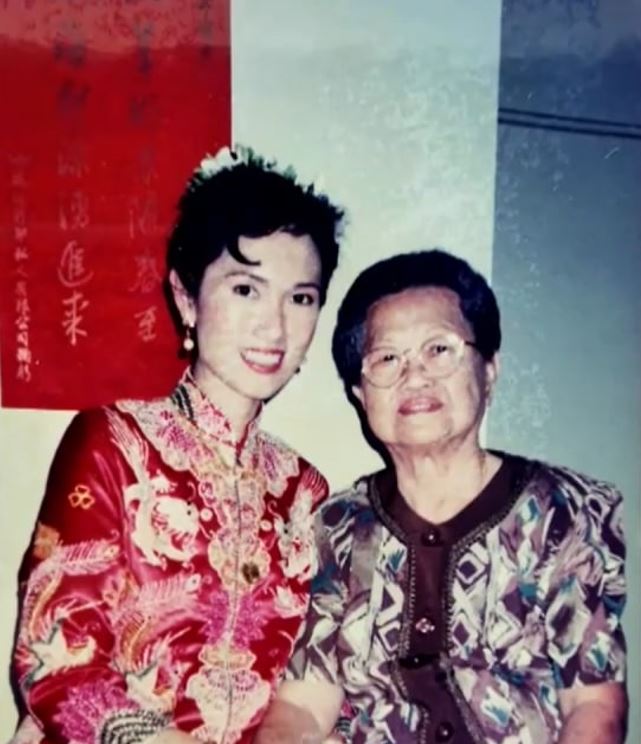 Madam Liao understood the demands on Mrs Teo’s time, being a member of the Cabinet. She knew that her daughter had many things to take care of, and did not want to take up too much of her time.

Yet Mrs Teo said her mother has always been supportive of her. When she kept throwing up during her first pregnancy, her mother did not find it disgusting but even helped her clean up. This made Mrs Teo cry at the time.

She said that even though she was pregnant with her first child at 30, she realised she still needed her mother’s help and support.

Mrs Teo has three children — a son and twin daughters.

Madam Liao shared that her hopes for her kids then were simple. She only wanted them to study hard, respect themselves, and make a life for themselves as the family was not exceptionally well to do.

Thankfully, taking her advice to heart, her three children, including Mrs Teo, “did not get up to any mischief”. In fact, she said her grandchildren are “very good”, and she credits their upbringing to their parents.

Mrs Teo recalled a time in Secondary Three when she kept failing her Additional Mathematics. She was afraid her mother would find out and stop her from playing basketball, so she hid her grades from her.

But eventually, Madam Liao still found out, and got her daughter a tutor. Mrs Teo’s grades then improved, and she started passing the subject by the fourth semester.

When asked about the meaning of having and raising children, Mrs Teo said, “anything worthwhile entails effort”.

Even though being a mother entails making sacrifices, it is still worth it because nothing can replace the kinship between a parent and a child.

Bringing a person into the world, and building a relationship with him or her… is a feeling that cannot be replaced.

She also said that every parent has a different way of caring for their children. Only when children settle down will they truly understand the effort and sacrifice of their parents.

Kudos to all mothers out there

Bringing up a human being in a way that they can contribute meaningfully to society is a hefty responsibility.

Although our parents may annoy or frustrate us sometimes, we should remember what they have gone through to bring us up.

Your mother is the first and most important woman in your life, so do treat her with love and respect.

MS News would like to wish all mothers, Happy Mother’s Day.

Baker Gets Mad At Mum Who Didn’t Support Her, Understands Her Reasons 10 Years Later

Grace Fu Gets Covid-19 In Copenhagen, Practises Yoga To Cope With Mild Symptoms