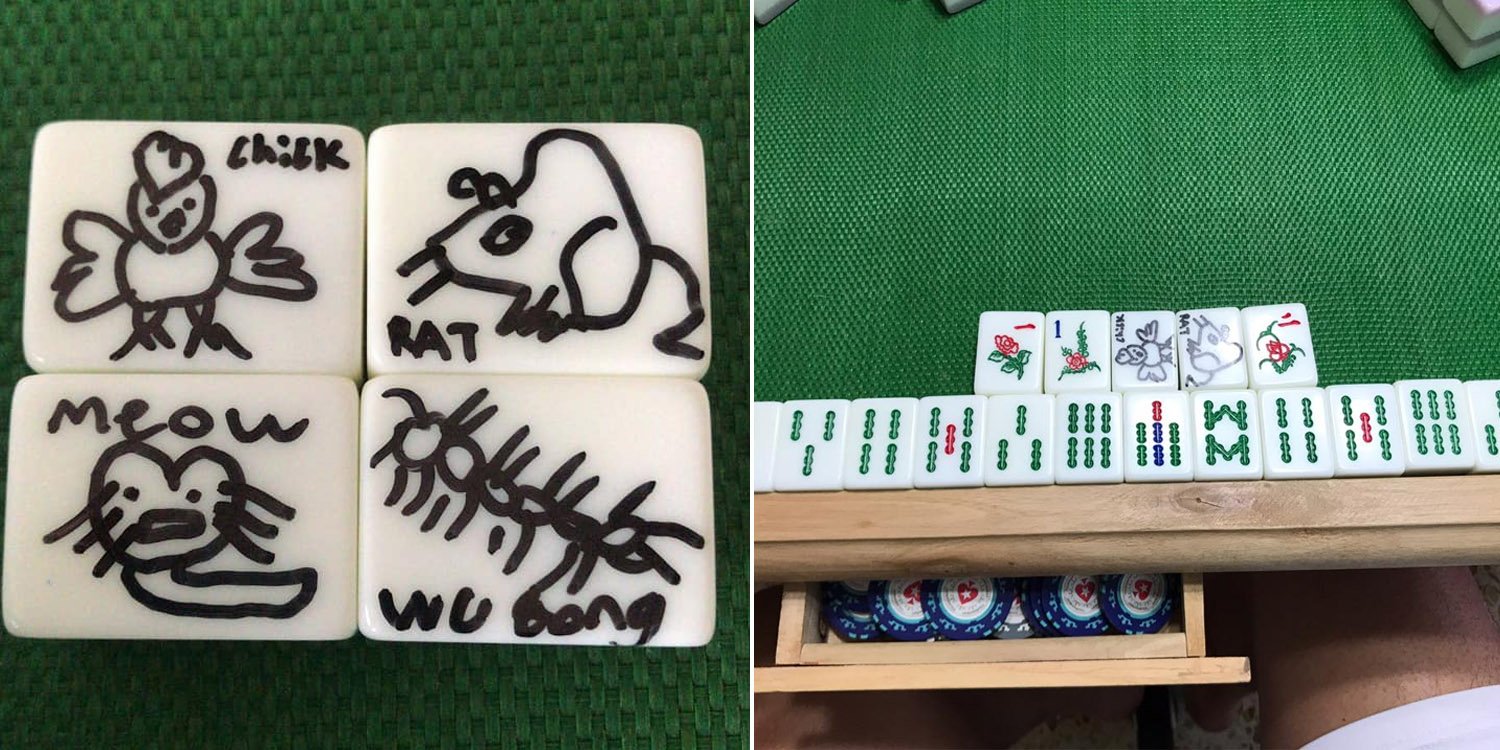 Animal and flower tiles are crucial in any mahjong game, without which many of our random combinations would be rendered unwinnable.

So one can only imagine the sense of disappointment when one opens a set of mahjong tiles only to find the bonus tiles missing.

But instead of calling off the game, a group of mahjong kakis put their artistic skills to good use by drawing the animals using black markers. 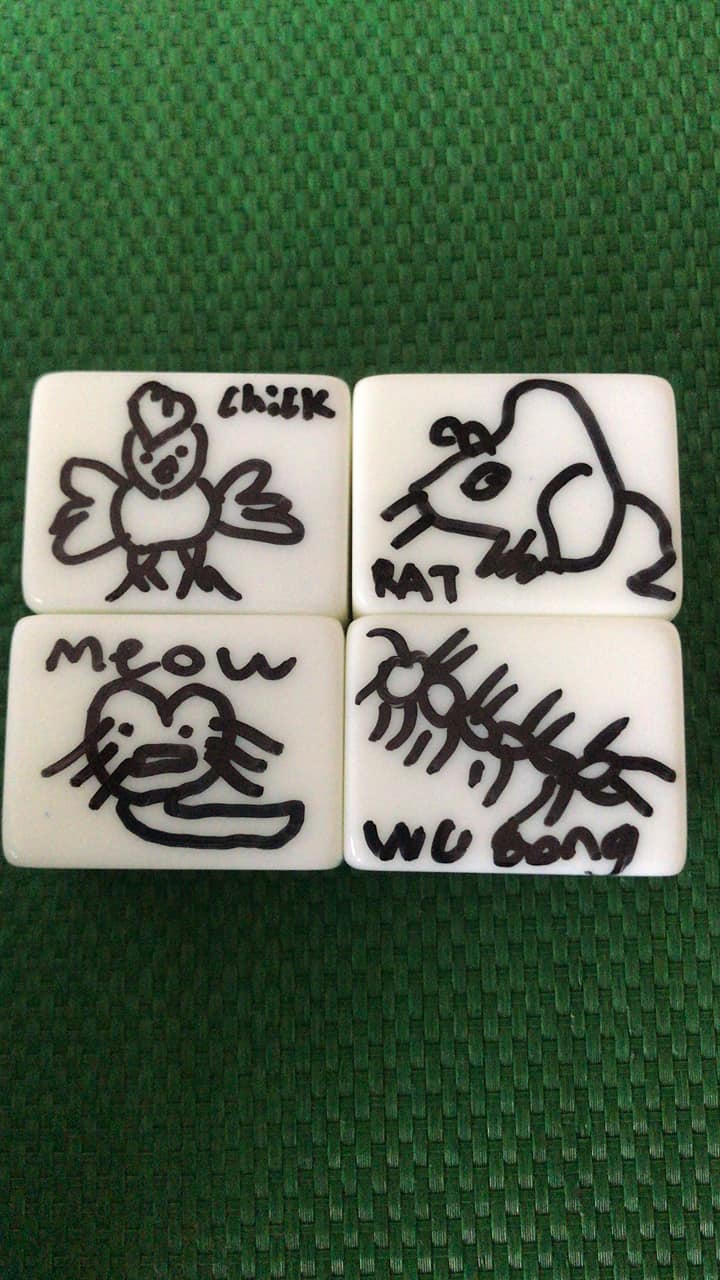 One of the players shared the pieces of art on Facebook and the post has since gone viral with many netizens praising them for their creative improvisation skills. 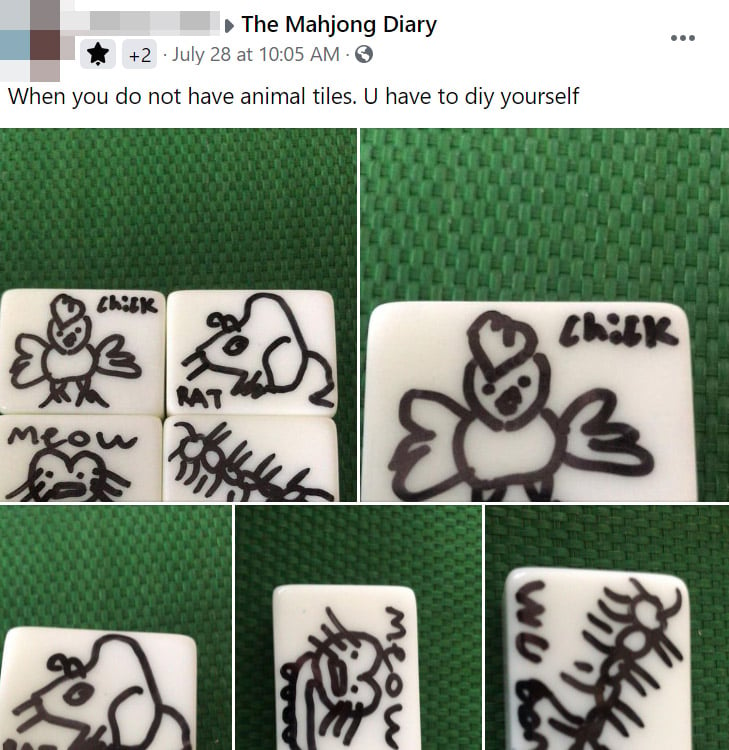 Unlike the colourful animal tiles that mahjong players are used to, these barebone drawings resemble those we’re used to seeing in a game of skribbl.

It seems the mahjong kakis have also taken the liberty of making slight adjustments to the ‘animals’.

The rooster tile, for example, has seemingly consumed the potion of youth and has now gone back to being a chick. 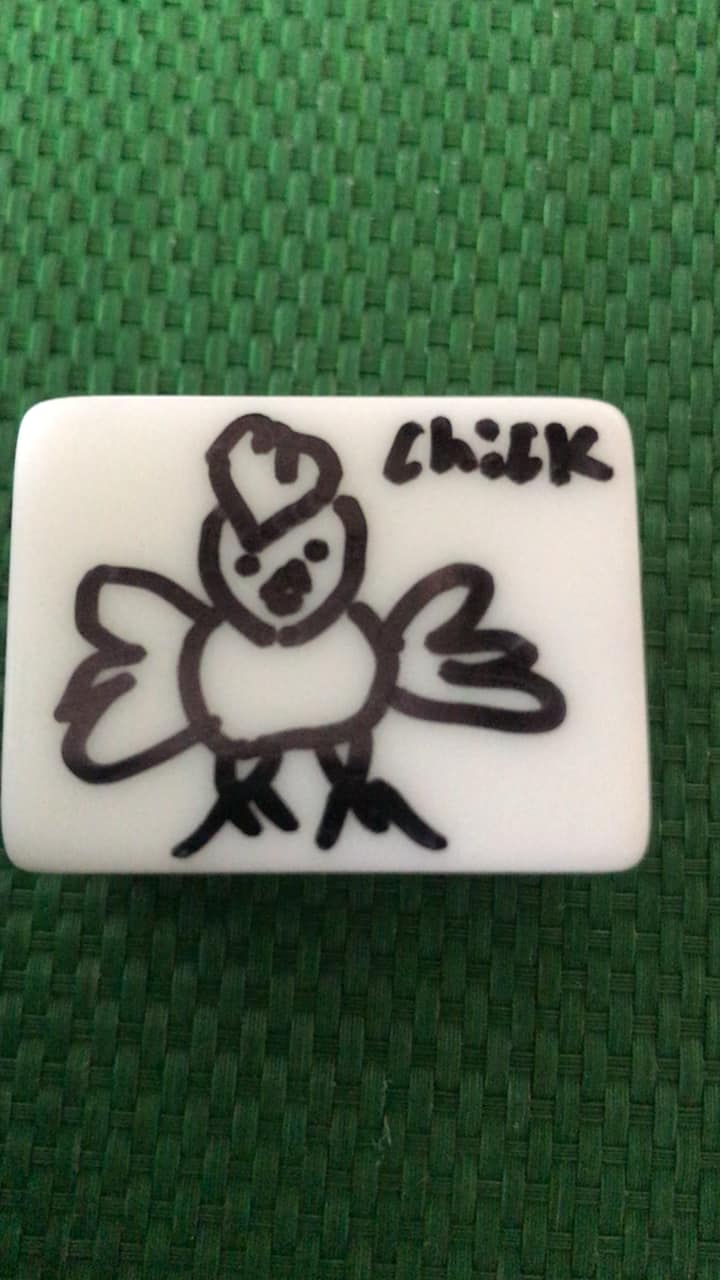 On the other hand, the rat seems to have developed what appears to be an arched back. 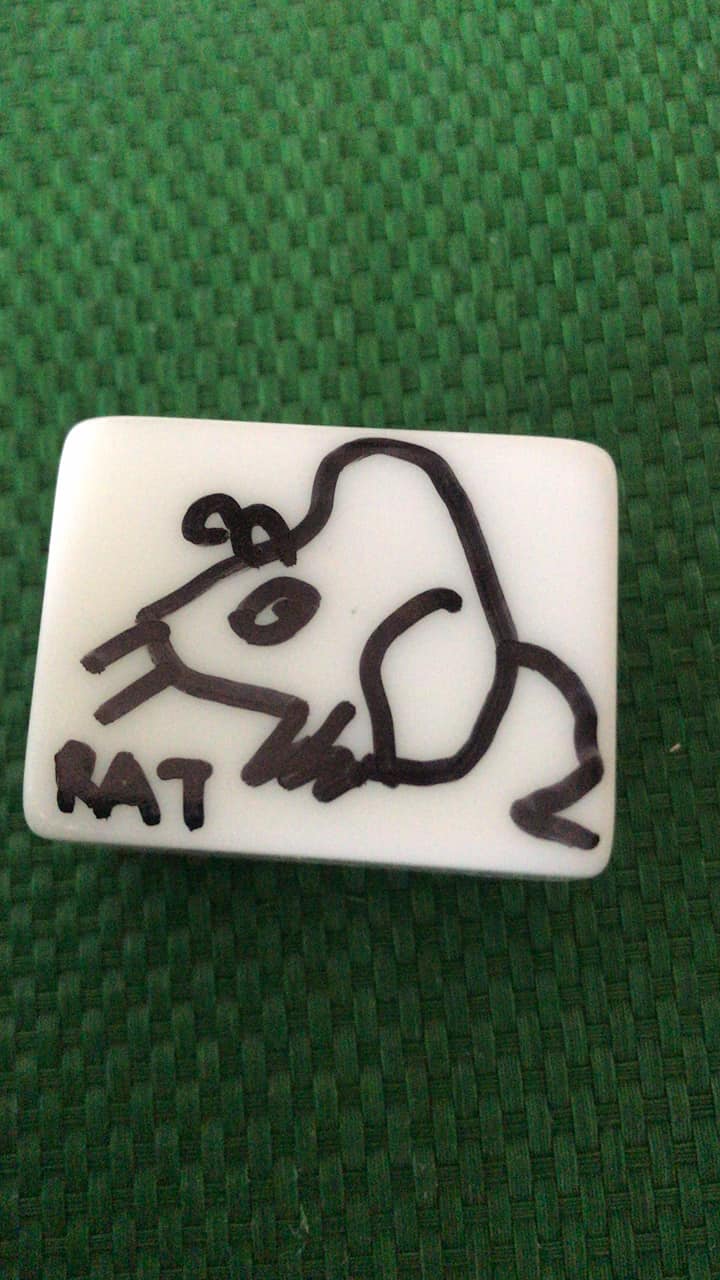 The centipede tile bore the most resemblance to the conventional ones. It has, however, picked up a new name — wu bong instead of wu gong, the latter of which means centipede in Mandarin. However, it seems the players lost the plot when it came to drawing the cat tile. With an elongated body and stubby legs, this arguably resembled a lion dance costume rather than a domesticated feline. It was named ‘meow’ too, presumably so others wouldn’t mistake it for something else.

Aesthetics aside, we all know what matters most is whether the DIY tiles brought in the huat.

Well, the OP managed to win with a 9-tai hand after getting 2 of the animal tiles, putting that concern to rest. 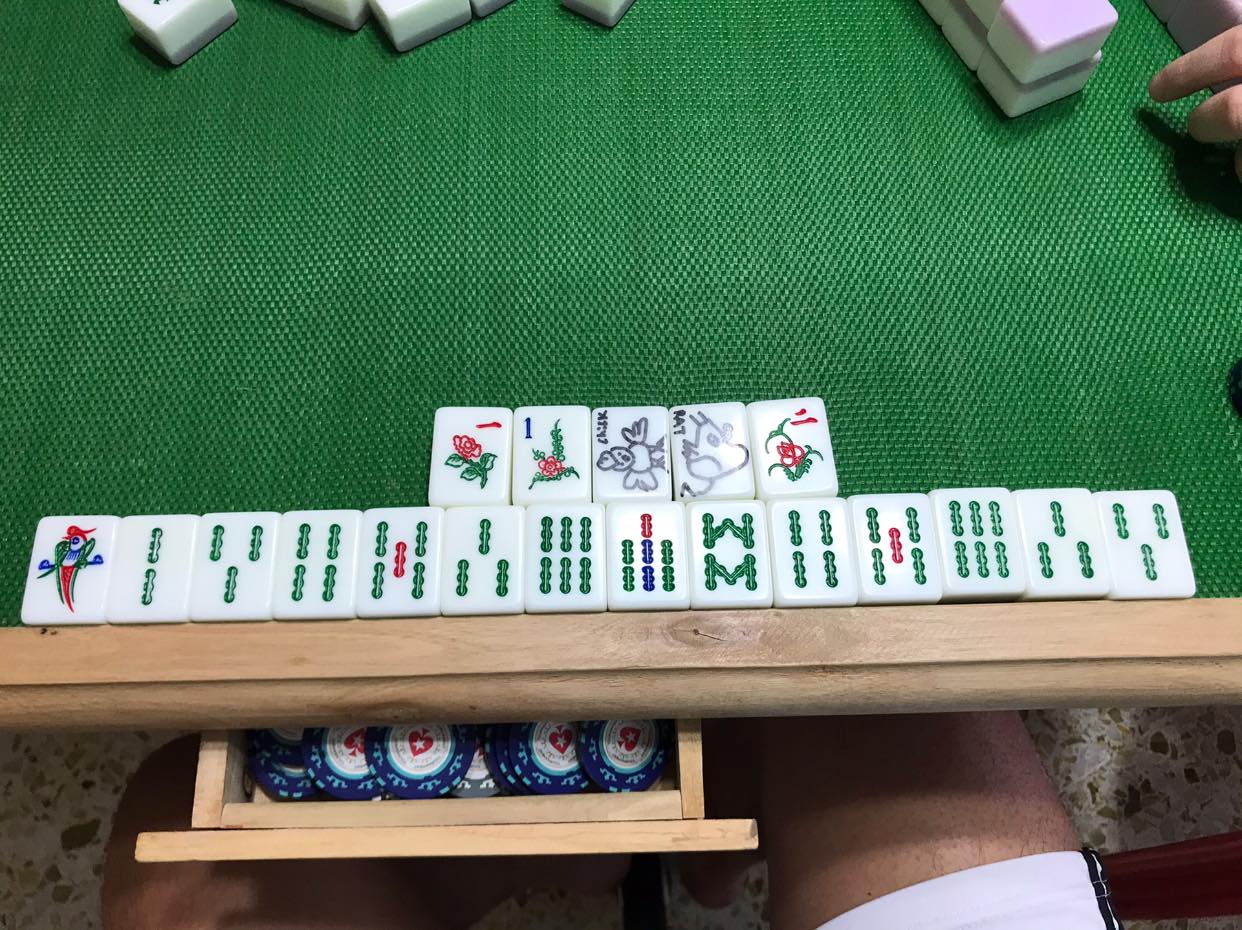 Just look at the chips overflowing from the drawer
Source

The post featuring the DIY tiles has since garnered 1,400 shares, with many netizens praising the players for their creative drawings.

This Facebook user tagged his mahjong kakis and volunteered to hand-draw similar figures the next time they are missing tiles.

Another netizen joked that drawing using markers wouldn’t allow players to mo pai, or identify tiles by feeling what’s engraved on them.

One netizen agreed with our assessment of the cat drawing, pointing out that it looks more like a ‘cat-erpillar’.

Who knew blank tiles could double as canvases

Kudos to the mahjong players for their creative drawings and on-the-spot improvisation.

Who knew the blank tiles in our mahjong set could double as canvases for stick figure drawings?

Have you and your mahjong kakis resorted to something similar when there are missing tiles? Share your drawings with us in the comments.