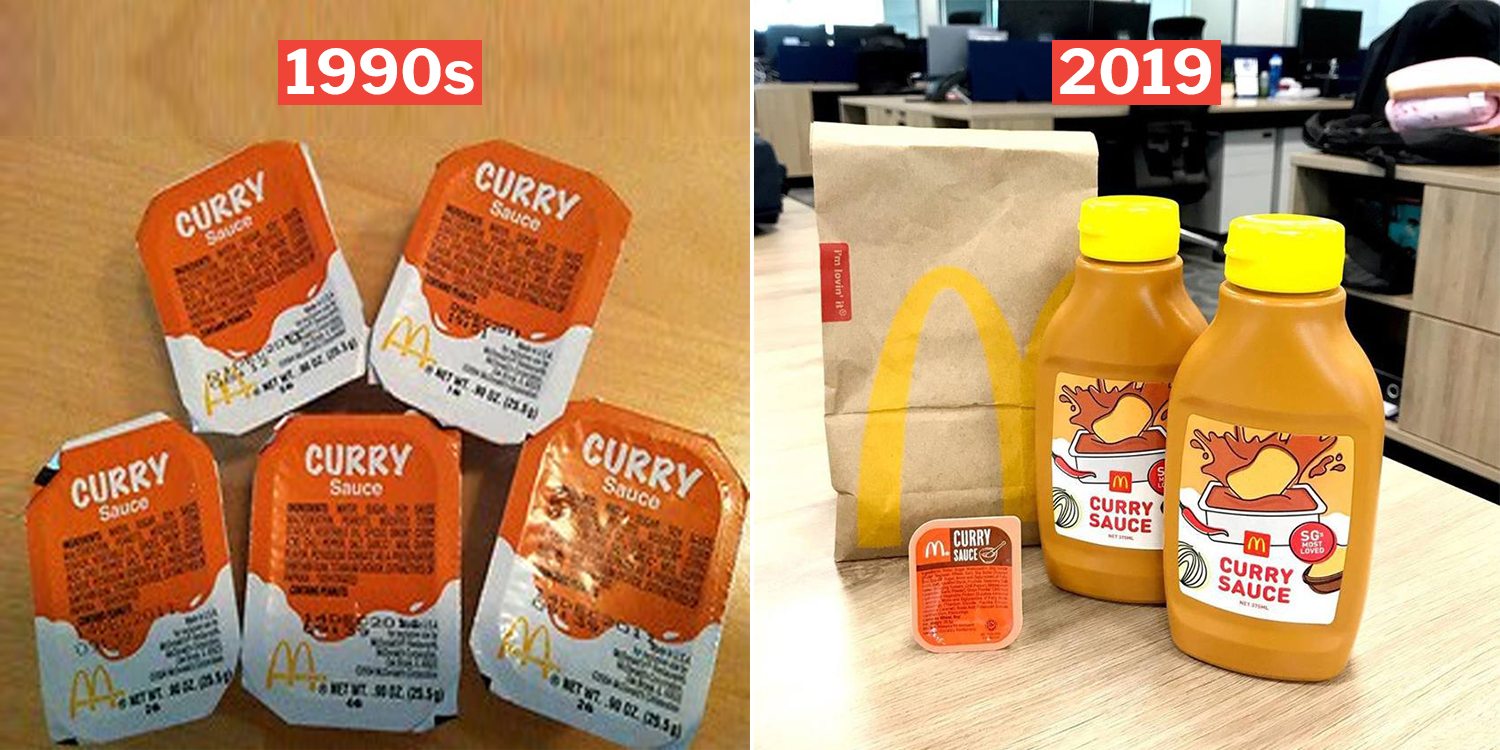 McDonald’s Curry Sauce Was Launched Back In The 1990s

On Thursday (30 May), McDonald’s re-released their signature curry sauce in bottled form, to the delight of many Singaporeans.

But have you ever wondered about the origins of the brown sauce that never fails to zhng up our deep-fried delights from the Golden Arches?

One Redditor who goes by the handle u/weewaaweewaa recently shared the often overlooked history of the most popular sauce among Singaporeans.

According to the post, McDonald’s curry sauce was first introduced sometime in the 1990s. This was one of the original designs back then.

Back then, Singaporeans had the privilege of having unlimited packets of curry sauce. That means you could essentially douse your fries in a pool of curry sauce in a similar way to how we dunk roti prata in curry.

All good things come to an end, and curry sauce is no exception. On 14 November 2011, McDonald’s released this statement:

Just one week later, McDonald’s announced the return of the curry sauce.

This time, in new packaging.

Even though McDonald’s assured Singaporeans that no changes were made to the sauce, some found that it was sweeter and less concentrated.

The ingredients on the labels were different too. Some speculated that the change was made to cater to those who were allergic to the previous version of the sauce.

Tragically, McDonald’s also stopped providing unlimited sauce for the customers. Instead, we had to pay $0.30 for every additional packet of sauce.

After a rather uneventful 4 years, McDonald’s Curry Sauce suddenly went AWOL in Feb 2015.

McDonald’s claimed that this was due to issues in their US supply chains.

According to the Reddit thread, the panic that ensued was relatively mild, as compared to the one back in 2011.

1 year later, McDonald’s released a bottled version of their signature sauce — basically a 375ml bottle of elixir that customers get to spam on their food.

The bottled sauce was sold for $4.50 per bottle then, with the purchase of any food items. Customers were also limited to just 4 bottles transaction.

Unsurprisingly, these were sold out within weeks.

Fast forward 3 years and McDonald’s fans who had stockpiled on the bottled curry sauce the year before must have surely been running low on their supplies.

It appears that McDonald’s have heard their cries. Because on 30 May 2019, McDonald’s re-released their bottled curry sauce once again, albeit at a higher price.

This time, each bottle costs $5.50, an $1 increase from the previous release. #inflation

From packets to bottles, McDonald’s curry sauce has come a long way since the 1990s.

The outrage and anguish that accompanied each period of absence also highlights the sauce’s popularity among Singaporeans.

We hope that McDonald’s curry sauce will continue to be available for years to come so future generations will be able to enjoy our favourite condiment.

If you’re keen on getting the bottled version of the sauce, we advise you to purchase it soon. You never know when they’re going to run out!