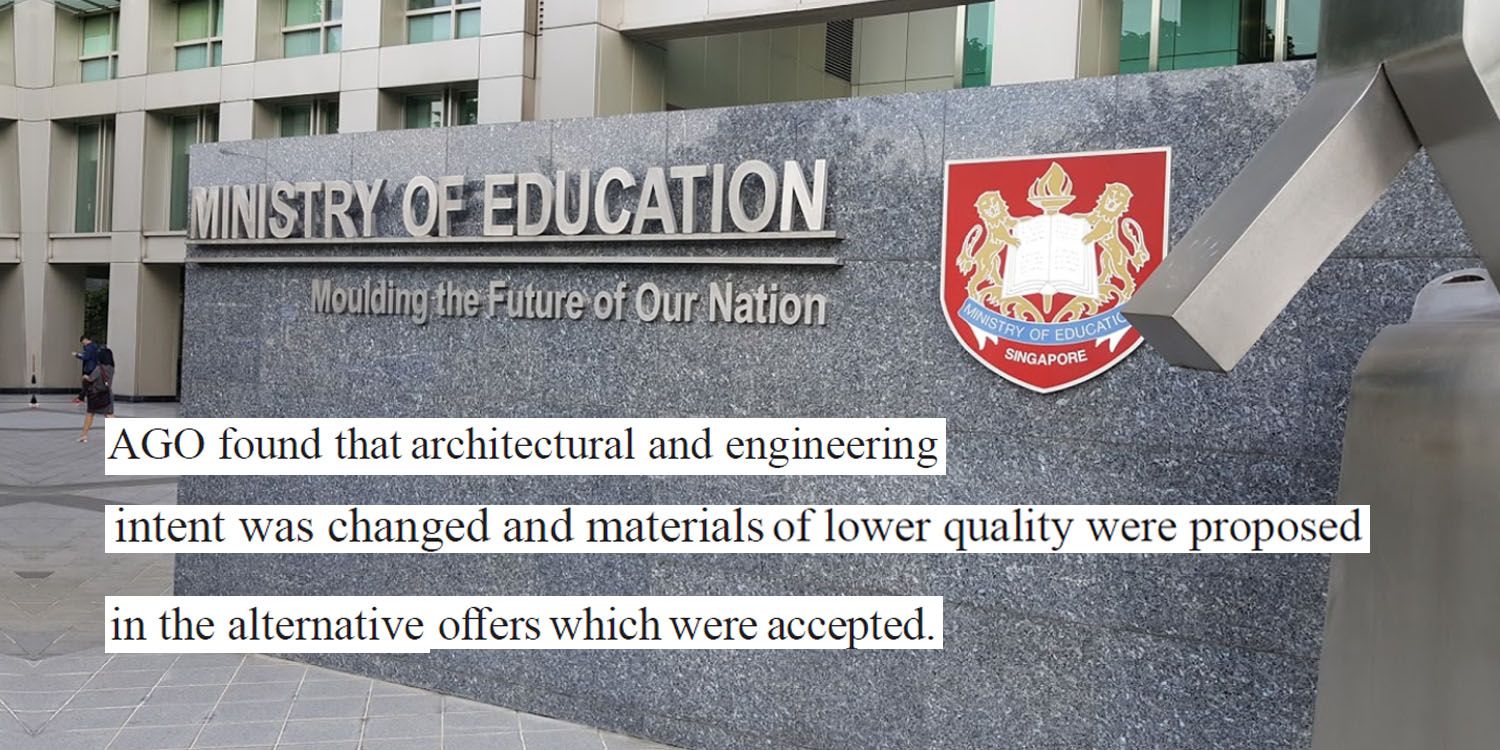 “No Assurance” That Ministry Of Education (MOE) Awarded Tenders Based On Fairness & Transparency, Says Auditor-General’s Office

The AGO report released on Wednesday (17 Jul) uncovered that the Ministry of Education (MOE) had pretty major lapses in $221.90 million worth of tender contracts, among a few other things.

AGO also checked on 3 government funds linked to MOE:

You can read the full version online here on pages 19-24 of the massive 66-page report.

AGO found fault with the “long delays” involved in issuing final accounts for “all 30 school construction constructs” that were screened.

According to the AGO, 65.5% of the contract variations – amounting to $780,000 – did not receive prior approval, before work was carried out.

AGO also said there was “no assurance” that MOE had exercised due “financial prudence” in the “use of public funds” for these projects.

2. Final amount of $13.61 million still due to contractors

14 FAs still haven’t been issued yet, eventhough it’s been 9 months to 3.7 years after the contract’s time frame.

Contractors have not received outstanding payments ranging from $400,000-$1.7 million for 4 months to 4.7 years after the “last interim payments”.

This probably explains the final amount of $13.61 million still “due to the contractors”.

3. Approvals only given after work had begun

Approvals for contract work by MOE in these cases, usually happened after work had commenced.

In fact, for 13/15 of these cases, approvals were only obtained 2 months to 2.8 years after “variation works were completed”.

To make matters worse, the lack of approvals wasn’t highlighted in reports to approving authorities.

4. Overpayment for some accounts

MOE could not provide evidence for how rates for 26 out of 29 contract variations were derived.

For two other construction contracts, AGO found a further estimated overpayment of $105,600.

According to AGO, delays in issuing FAs to contractors may affect their cash flows. They’d also raised “similar observations” to MOE before in a previous audit for FY2013/14.

Currently, 2018’s audit “revealed that the instances of lapse and periods of delay” had in fact “increased”.

Worryingly, in 5 construction and 4 consultancy tenders for “school development projects”, AGO found lapses in all 9 tenders amounting to $221.90 million.

There was also “no assurance” that MOE contracts were awarded based on “transparency, fairness and value for money”.

MOE made changes to the “quality criterion”, after the tender was closed — this involved a 25% change which was “significant” in determing whether the vendor was picked.

A criterion for a consultancy tender was similarly changed after the tender was closed — the revised criteria was used to evaluate other bids.

In this case, the criterion of “construction timeline and phasing” was changed to “design buildability, constructability and maintainability”.

For 5 construction tenders and 2 consultancy service tenders worth $215.29 million, information about another company with a similar name was used to “award the score to a tenderer”.

Errors were also made in using these tenderers’ projects as “proof of track record”, although the projects did not fall within the stipulated time frame.

MOE accepted “alternative offers” which changed the “architectural and engineering intent” and included “materials of lower quality”, said the AGO.

AGO elaborated that MOE could be challenged with regards to the “tender evaluation process” being “deliberately manipulated” to favour certain tenderers, after bid details were made known.

Lastly, AGO pointed out that there was “no documentary evidence” to show that all evaluation criteria was “established upfront”, to prevent manipulation in favour of certain tenderers.

MOE promises to do better next time

MOE has acknowledged the lapses pointed out by AGO and will be “step(ping) up efforts” to monitor the accounts more closely.

They’ll also be trying to “ascertain the amounts overpaid” and “recover overpayments where possible”.

As to the lapses in the tender process, there was only a single line put forth by MOE about the matter in AGO’s report,

MOE informed AGO that it would put in place measures to strengthen the tender evaluation process.

We sure hope they will.

Tender lapses are safety lapses for our children

We hope that the tender process is improved ASAP for MOE as they have promised — especially in the case of construction projects for schools.

If what AGO says is true, accepting alternative bids with “materials of lower quality”, although cheaper, will pose a significant safety risk for our children.