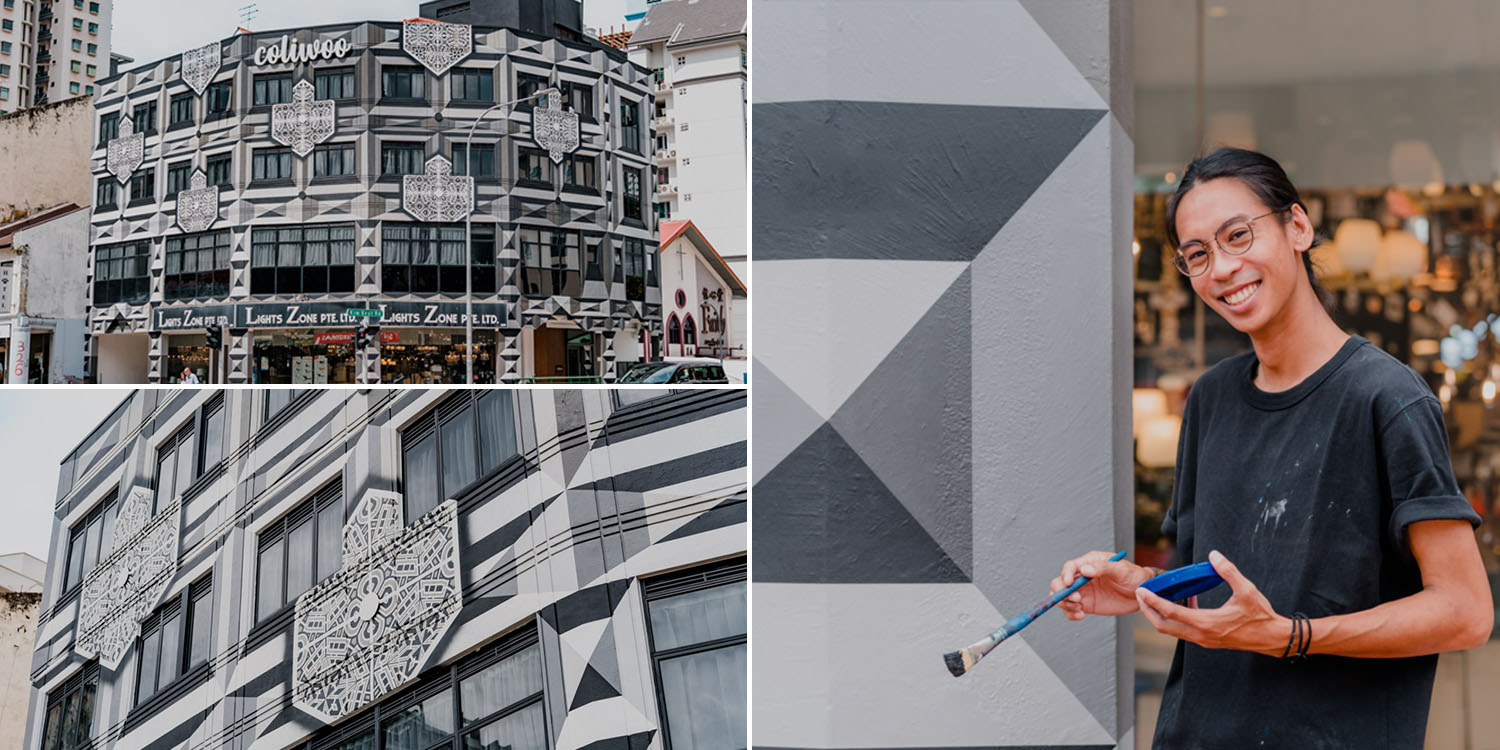 Just three people painted the entire building by themselves.

Sometimes, words of wisdom from teachers may not be apparent until years later. “Take five years to see if you really want to be in this line of work,” a lecturer from Chris Chai’s university told him.

He didn’t understand what he meant until Covid-19 hit, and he did just two projects for the entirety of 2020.

But the 35-year-old knew he wanted to be an illustrator from a young age and wasn’t going to deviate from that cosmic plan. “There was no Plan B,” he shared with MS News.

Various circumstances and a stint working at an art gallery would lead him to paint buildings for a living. Chris completed his biggest project this year – a 3D greyscale building facade in Balestier. 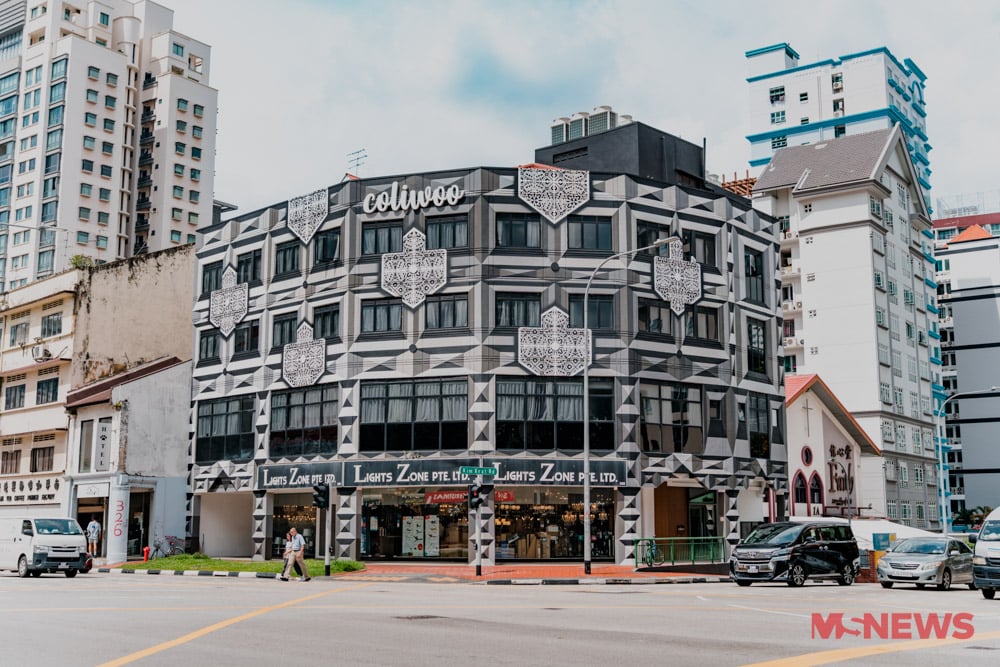 Conspicuous among a sea of simply-painted buildings with lighting stores, the building owned by Coliwoo certainly adds a different flavour to Balestier.

We talked to Chris Chai to learn more about the design’s themes and his other work as a muralist in Singapore, a profession seeing more robust demand in recent years.

Co-living company contacted Chris Chai after seeing his other work

The commission came about after the client saw Chris’ previous work at Amoy Street, a dragon adorned with repeated patterns as a motif. Coliwoo, a co-living space, commissions local artists to paint murals on all their building facades, and for their new building located along Balestier Road, they also wanted something similar.

The project took over a year from start to finish, most of it due to the creative process before painting the building.

While there was plenty of back-and-forth regarding the design’s details – as anyone who’s worked on a commercial project can testify – Chris shared that the client was fully on board with the design from the beginning. 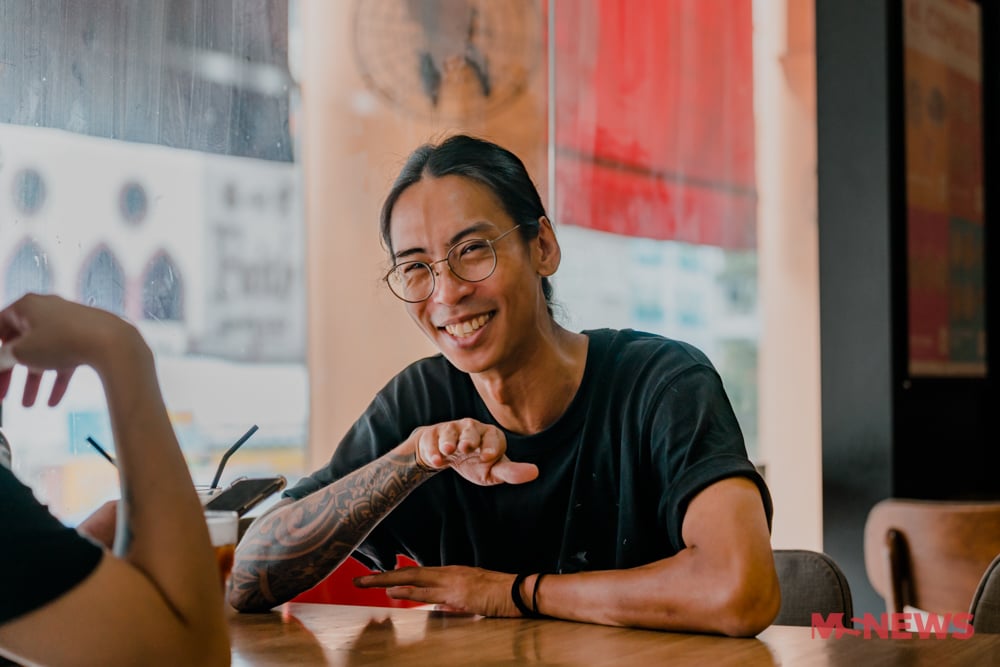 Some initial sketches included a myriad of colours, but Chris eventually settled on greyscale to create a “fake sense of depth and light” together with the shapes and patterns.

Some areas appear to jut out but actually don’t, while others seem to have more depth than they actually do.

First project working on this scale

Chris describes the project as a “big learning experience”, having never tackled a building of this size before. His previous murals were mostly of single walls or flat surfaces, but this building was the largest and most unusual he’s had to work on.

There are grooves on the walls, which Chris took advantage of as part of the design, utilising geometric shapes to create an optical illusion.

Creating the design out of a white canvas required more calculations than Chris ever expected.

They can’t be seen now since they were painted over, but Chris actually scribbled a bunch of calculations – mainly divisions – on the walls to demarcate the spaces to paint and create the geometric shapes you see now.

You will notice that the shapes include what seems like a dot in the middle of them — they’re actually jutting out of the building, and Chris utilised them as part of its design. Viewed from afar, however, such details are almost imperceptible.

Working in the sun & rain

Of course, things don’t end with conceptualising the design – the next step is actually to paint it on the building. 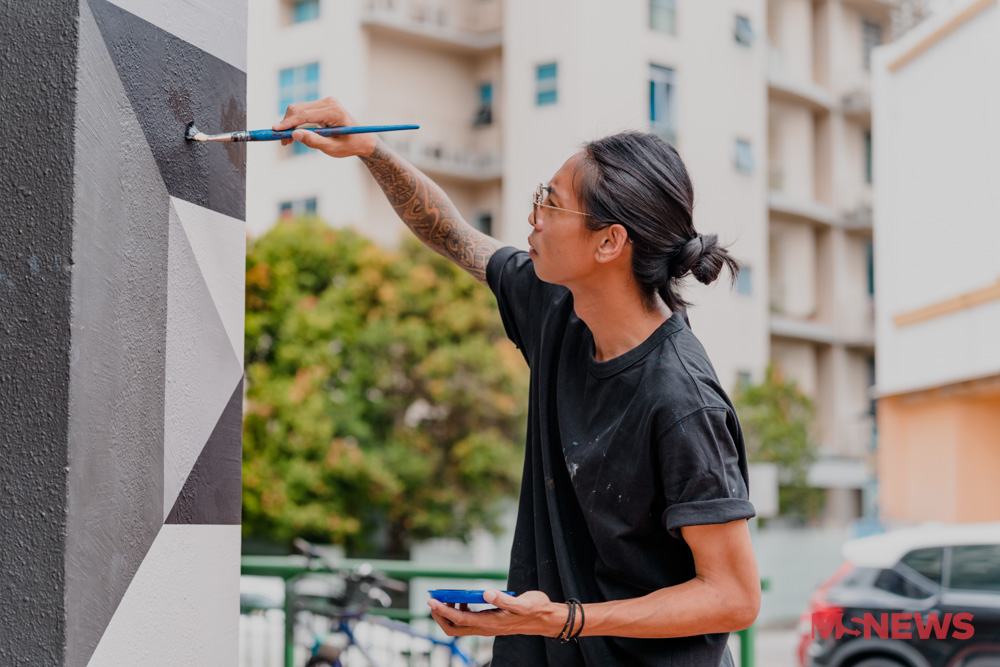 Even if he wanted more help, logistics such as the scaffolding only allowing for two people at a time made it impossible.

He also learned just how much tape one could use – over 200 rolls were sacrificed in these five months.

Not to mention Singapore’s weather conditions made the painting an ordeal in itself.

If it’s sunny, the paint will dry fast, but if Chris wasn’t careful, exhaustion and dehydration would also set in.

“(I) just have to learn to bear with it,” he shared. Chugging several bottles of water every day became a way of life. Little wonder he’s as tanned as he is. 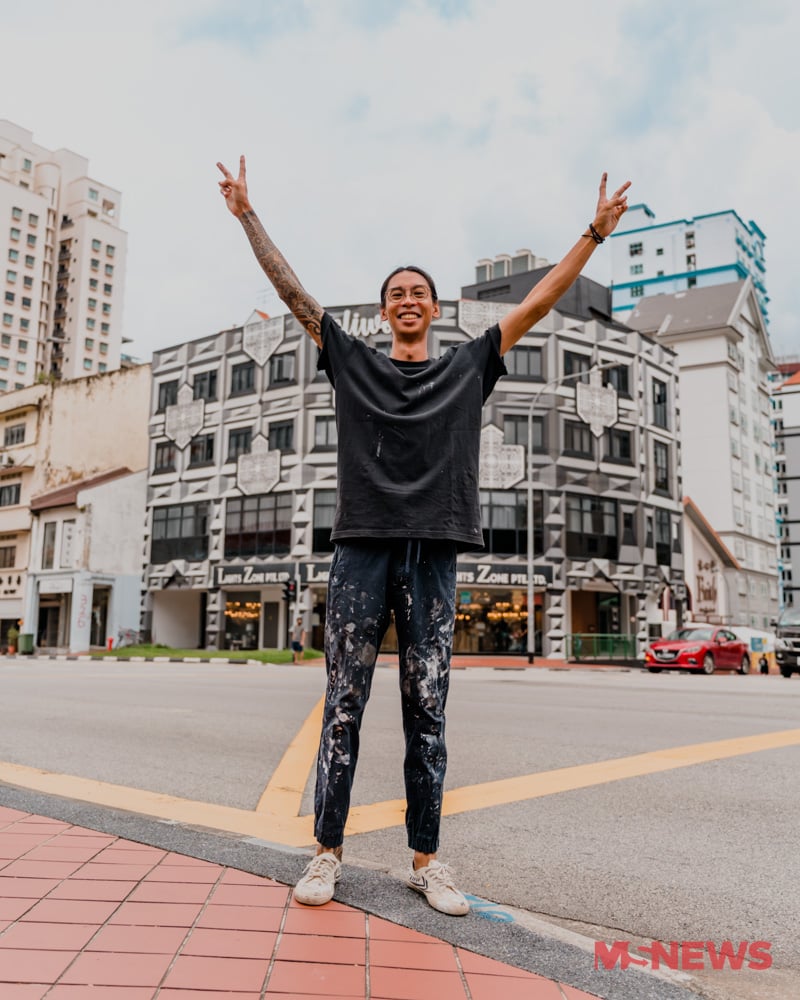 On the other hand, working in the rain was impossible as the paint would take too long to dry. One time, Chris tried ‘cheating’ the weather and painted on a rainy day, only to see all his efforts literally washed away. 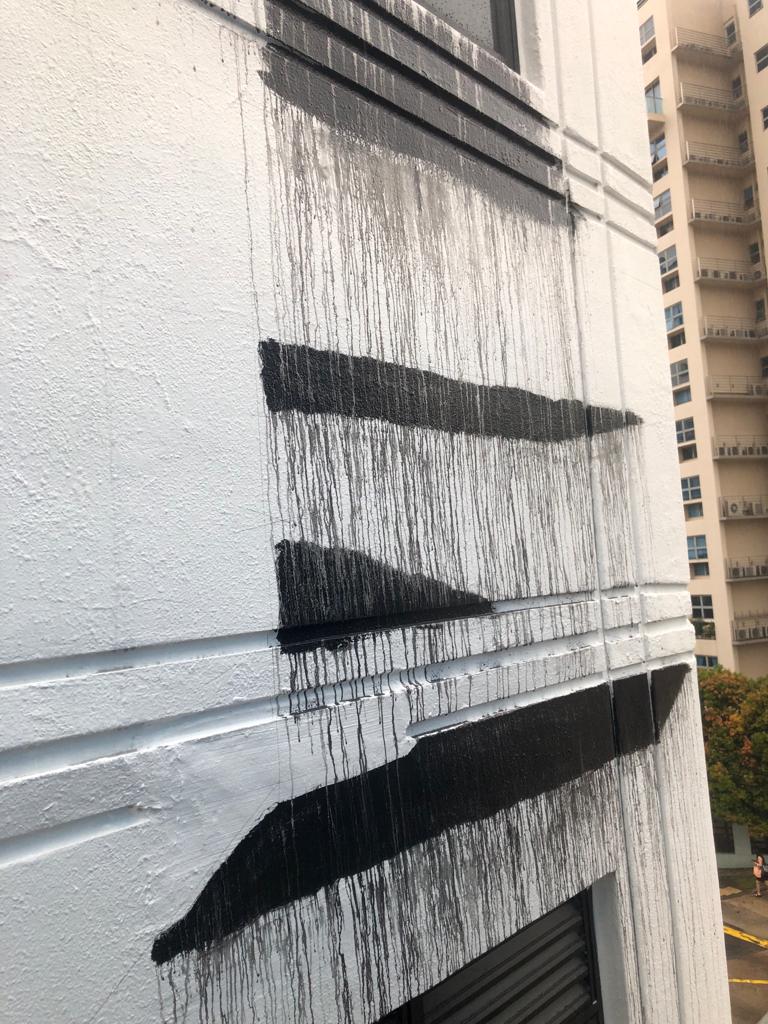 From then, he learned that the weather would do whatever it wanted, and it would not do him any good to fight it.

Working on the painting was also more than a full-time job – Chris would be at the site two hours after he woke up at 10am until the sun set for the first few months before impending deadlines forced him to keep working into the night in its final stretches.

Chris had to get some portable lights to work at night because he needed to check if the paint shades had mixed correctly.

But he shared that working the night shift wasn’t so bad, since it was cooler than in the day and quieter.

Chris Chai hopes muralling will take off more in Singapore

A painted building like this is rather uncommon in Singapore compared to the West. But in recent years, large brands such as Twitter and Google have commissioned artists to do murals in their offices and on building facades.

The rise of taking and sharing Instagrammable walls and buildings on social media in the past few years has also helped more murals bloom here.

Naturally, Chris is happy with this trend since this means he gets more work, but he also believes that murals can help to make Singapore’s concrete jungle landscape more vibrant.

More importantly, compared to illustrating, which he’s been doing for a long time, going outdoors to paint gives Chris a sense of fulfilment. As such, he’s thankful for the opportunities he gets now, especially to Coliwoo, who he said was a great client throughout.

His financial situation today is a far cry from the pandemic season when projects completely dried up, and he went months on end without any income. 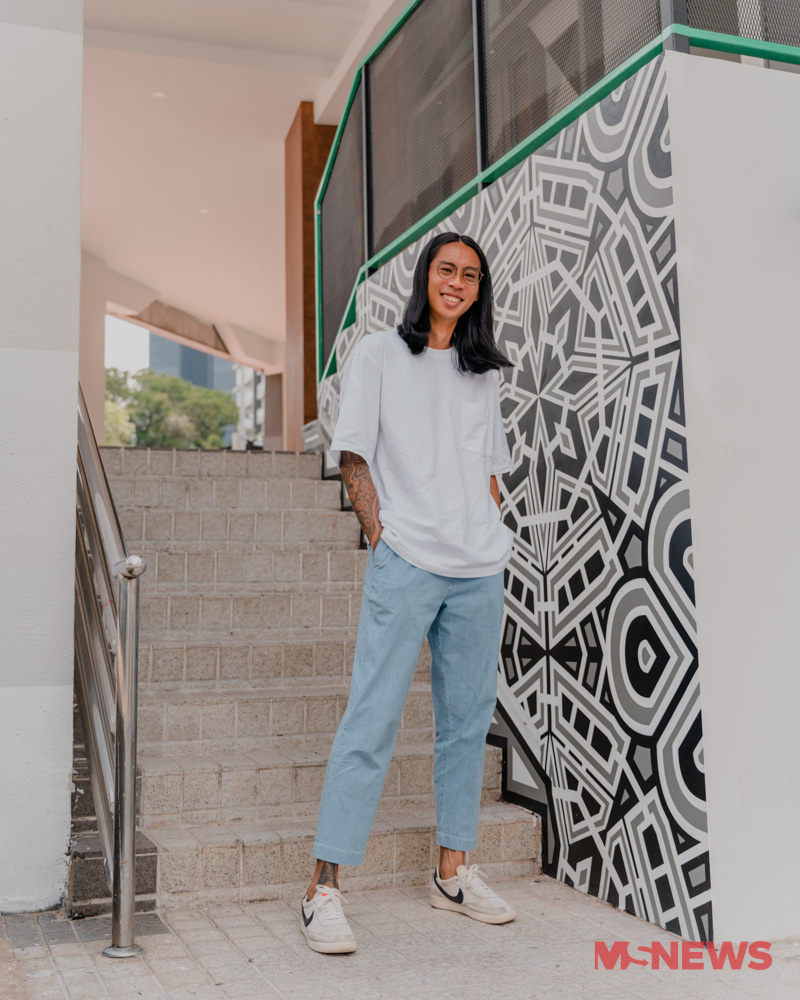 Hence, the pandemic and its accompanying difficulties forced him to sit down and think about his career choices.

Luckily, Chris came out of this introspective period with renewed clarity — he would make being an artist in Singapore work, no matter what it takes. Five years on, the words his lecturer imparted to him finally resonated.

It turns out no amount of parental worry, pandemic-related setbacks, and societal concerns – the eternal debate on whether one can thrive in Singapore as a creative rages on – can turn Chris away from his path.

Chris is currently working on a new project in Middle Road, and you can check out his progress on his Instagram stories.

Know more inspiring individuals like Chris? Get in touch with us via email at news@mustsharenews.com.