Ex-Prime Minister of Malaysia Najib Razak has cried foul, on the back of authorities freezing his personal bank account.

Najib says that he only discovered that his account was frozen, after a cheque he issued bounced.

He shared that he had intended to pay for his daughter’s medical treatment with that money.

However, he did not elaborate on when this occurred.

Here’s his official English statement posted on Facebook last night (11 Jul) in full. We summarise it after the jump. 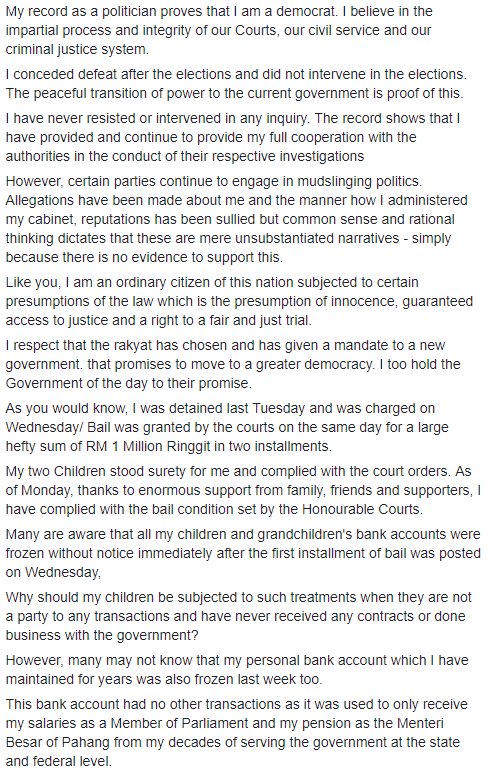 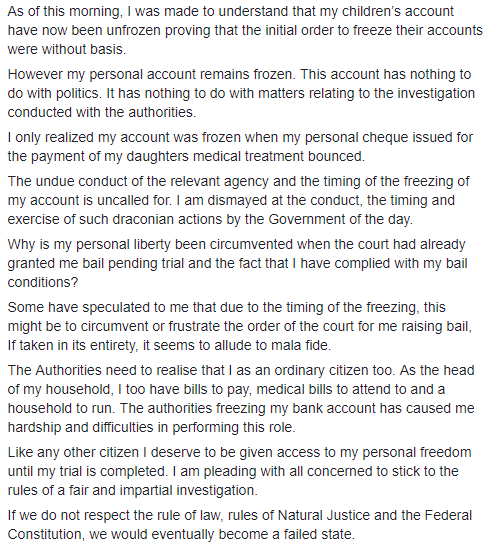 Najib has called the measure “uncalled for” and “draconian.”  He pleaded for the authorities to consider him an “ordinary citizen too”.

As the head of my household, I too have bills to pay, medical bills to attend to and a household to run.

Thus, without a functional bank account, he feels that he’s experiencing “hardship” and difficulties in supporting his family.

The ex-PM also called for the ruling government to “respect the rule of law”, or risk becoming “a failed state”.

You may be wondering if there’s any truth in what Najib is claiming.

While Najib has clarified that his children’s accounts have “now been unfrozen“.

Nothing to do with politics

Najib’s claims border on personal persecution, as he thinks the move to freeze his accounts have “nothing to do with matters relating to the investigation”.

The account that has been frozen is also his “personal account” which has “nothing to do with politics”, at least according to him.

Of course, if the 4 charges against him are proven to be true, the claim that his personal account has nothing to do with politics may not be as valid.

Where to draw the line?

Najib is facing 3 charges of Criminal Breach of Trust, involving the mishandling of state funds.

As well as one account of abuse of power, for attempted bribery of millions of ringgit.

He has maintained his innocence with regards to the charges.

If found guilty, however, faces prison time, whipping and fines no less than 5 times the purported bribe amounts.

Nonetheless, we hope that his daughter will be able to afford treatment for her condition.