Actress Naomi Yeo Exercises After Vaccination & Gets Chest Pain, Reminds Others To Rest 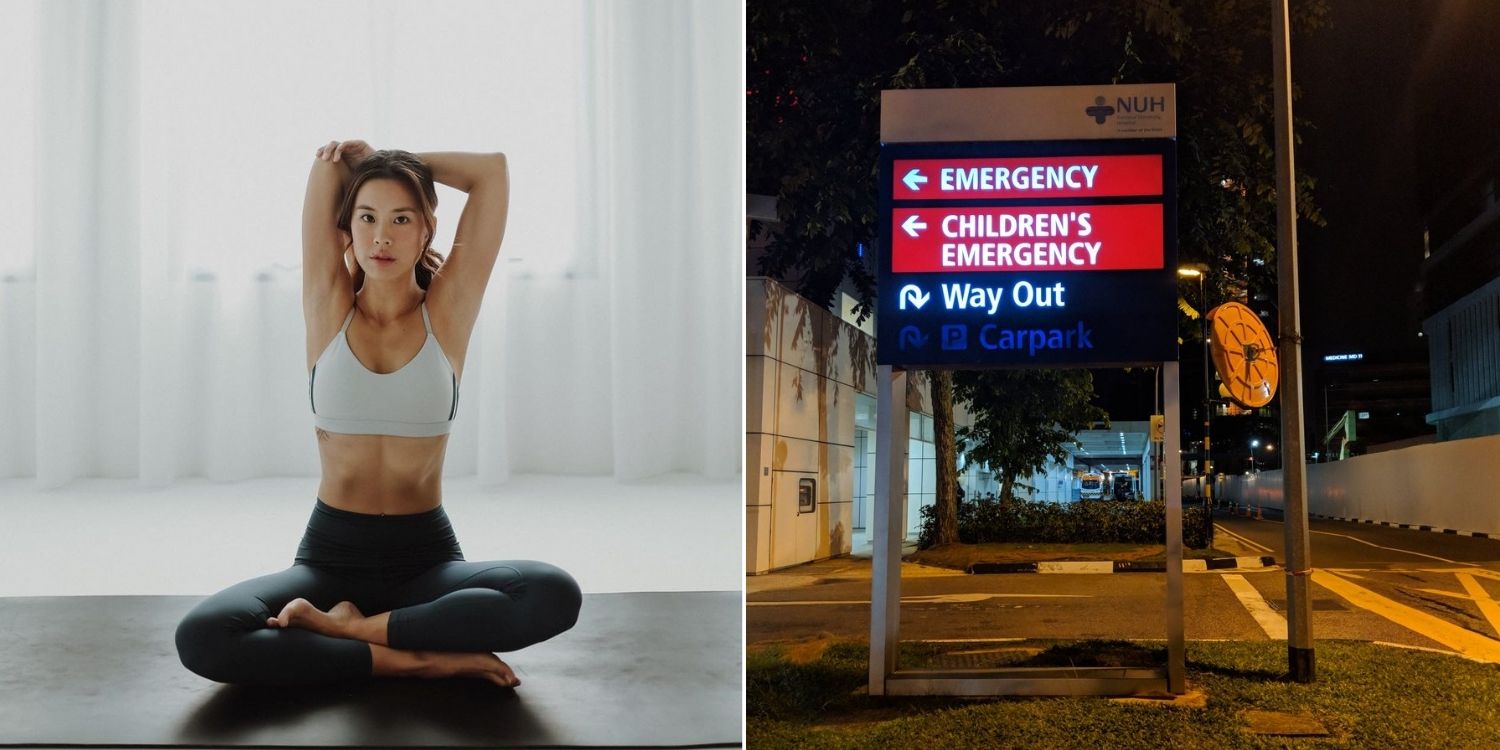 She exercised soon after getting her 2nd dose.

Most of us would either have completed our Covid-19 vaccinations or are waiting for our 2nd dose. While the side effects may vary, the Ministry of Health (MOH) has advised all to rest more after getting vaccinated.

Having had a health scare after failing to do so, local actress Naomi Yeo took to Instagram to share about her experience exercising after her 2nd dose of the vaccination.

According to Naomi, she felt chest pains, which saw her husband rushing her to the Accident and Emergency (A&E) Department at the National University Hospital (NUH).

Started working out after fever broke

According to Naomi’s Instagram stories, she had experienced the common side effects after taking her 2nd dose of the Moderna vaccine. 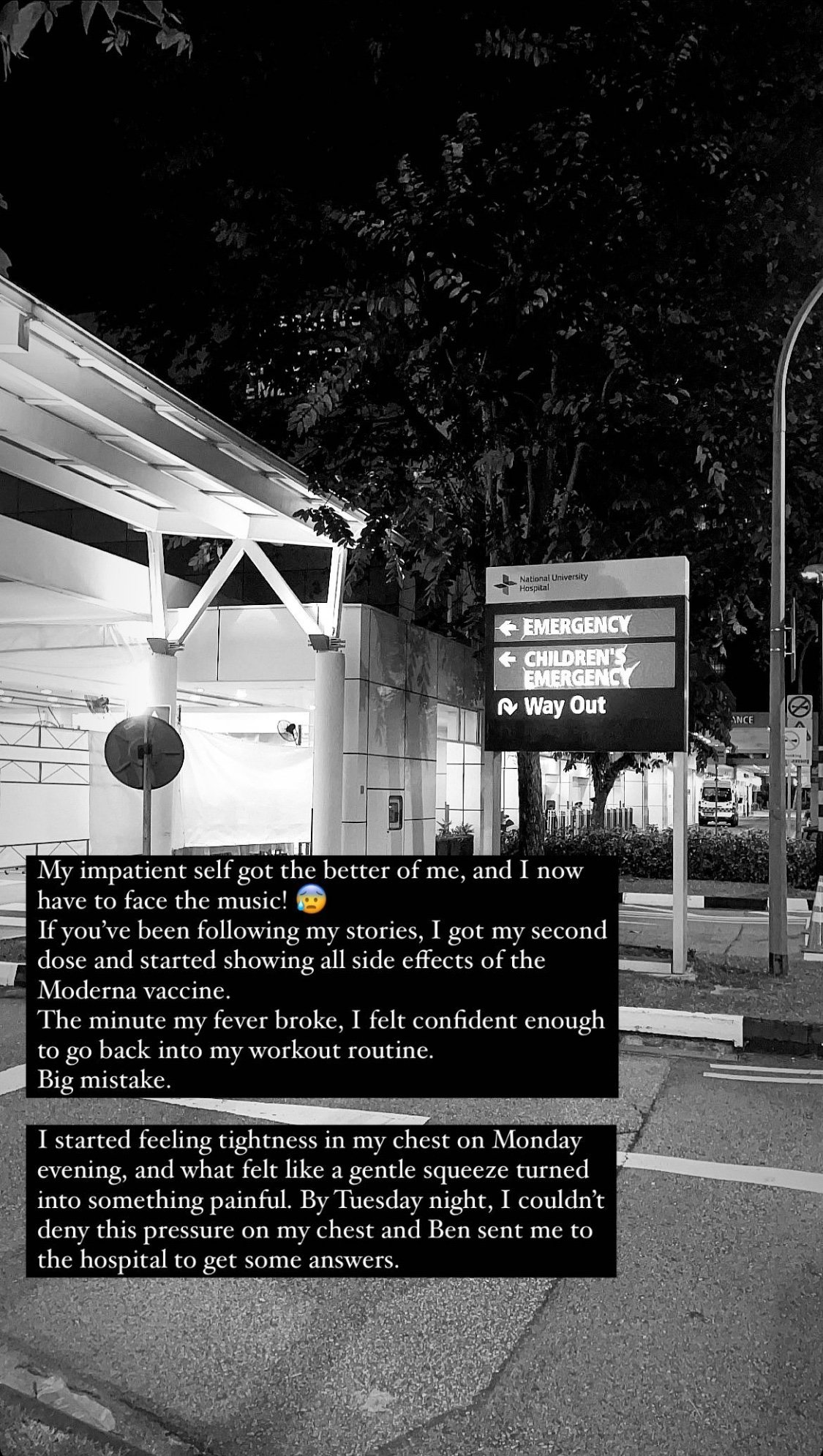 Once her fever subsided, she felt confident enough to return to her usual workout exercise.

Unfortunately, her actions resulted in chest pains on Monday (19 Jul) evening. At first, it was only a “gentle squeeze”. However, it started getting worse and became more painful.

By Tuesday (20 Jul) night, she was no longer able to take the pressure on her chest and had to be rushed to the A&E.

Doctor said chest pain could have been avoided

Naomi found out that her chest pain was a side effect of the vaccination, which the doctor apparently said would not have happened if she had rested. The doctor advised that any physical workout or activity should be avoided for a week after getting the vaccination.

Even after a week, it would be better to start slow and not rush into your normal workout routine.

With all the medical tests she had to go through, Naomi was slightly worried about how much her medical fees would amount to.

To her surprise, the total turned out to be lower than she had expected, thanks to a substantial Government Subsidy.

She even shared a snapshot of a poster stating that A&E fees are down to $128 after the 50% subsidy. A check on NUH’s website, however, shows A&E charges fixed at $128, so the subsidy may have applied to her other tests. 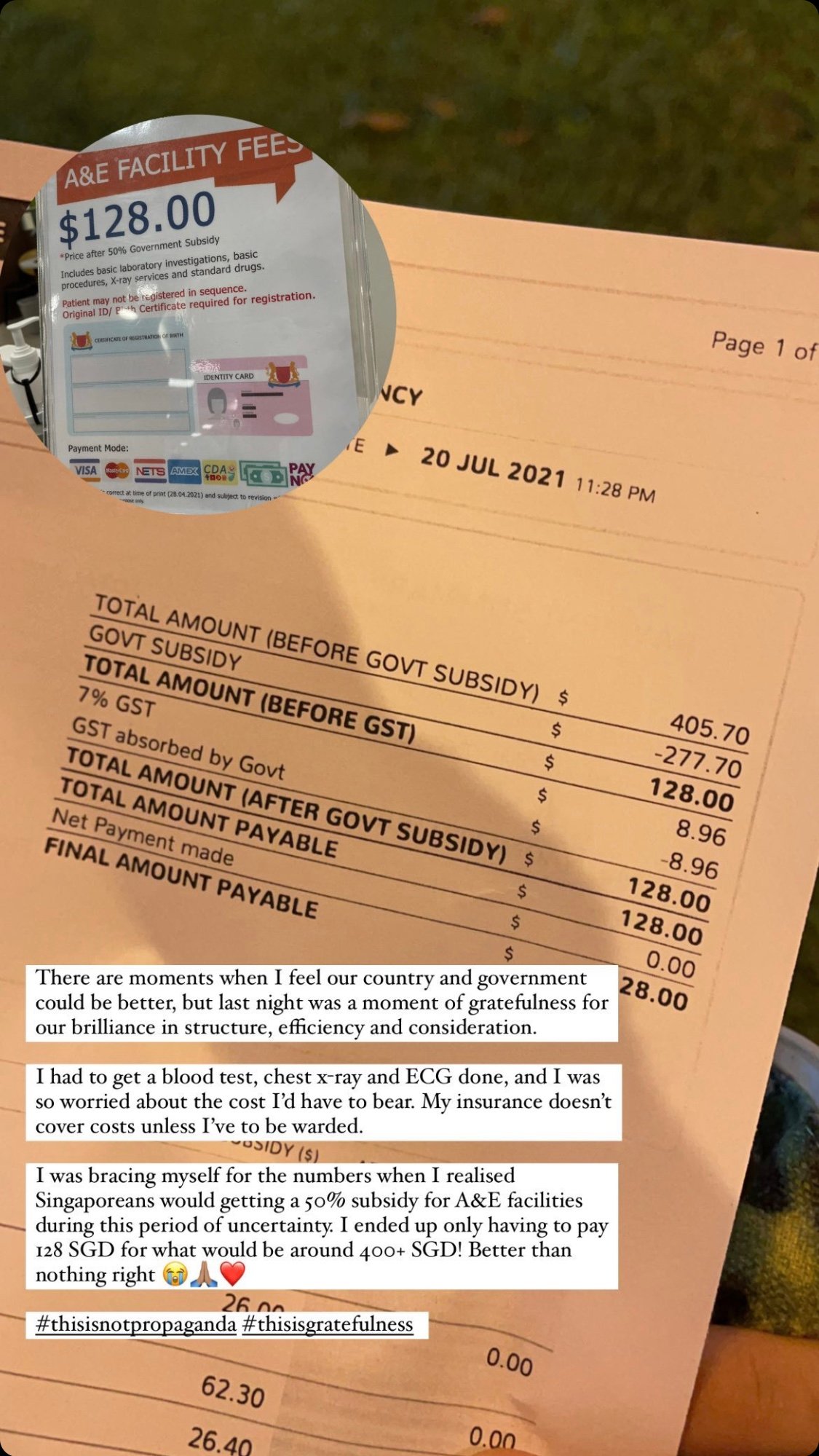 She thus expressed her gratitude for such measures during this Covid-19 period.

In her last update about her condition, Naomi shared that she was still experiencing chest pains as of last night (21 Jul) and is recuperating.

She also mentioned that some netizens have had similar experiences. 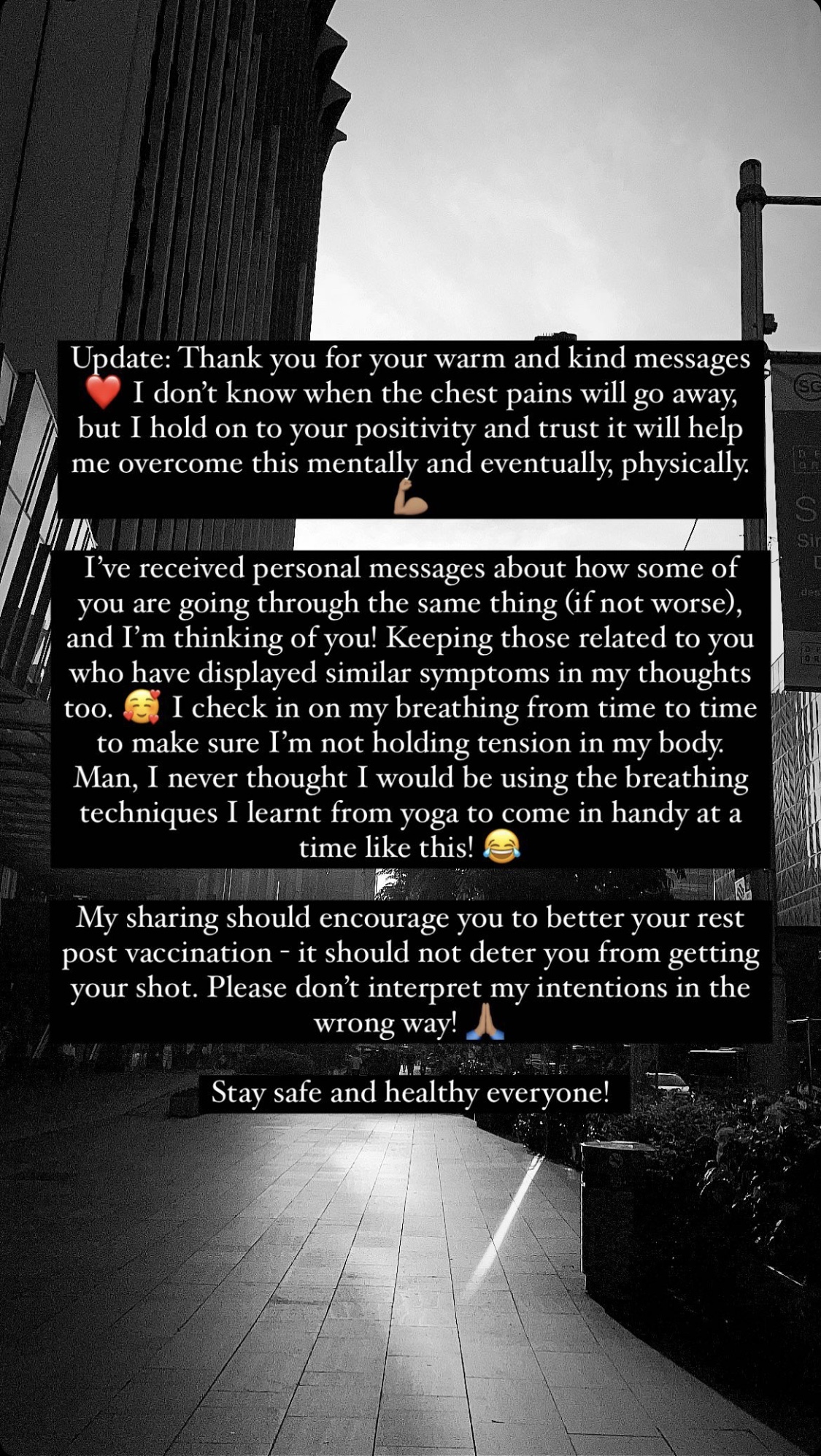 More importantly, she explained to everyone that this should not deter people from getting vaccinated. Rather, she hoped that her account could serve as a serious reminder for everyone to take time to rest after their vaccinations.

MS News has reached out to Naomi and will update the article accordingly when she gets back to us.

Get plenty of rest after your vaccination

The Covid-19 vaccination increases our defences against the virus. However, we must also take care of our bodies and ensure that we don’t push ourselves too hard.

We have seen a number of cases where complications occur when people exercise after their vaccination.

We should thus remember to get plenty of rest after our vaccinations to reduce the likelihood of such issues from happening.