The OCBC Scam Took My Life Savings, This Is How I Made My Peace With It 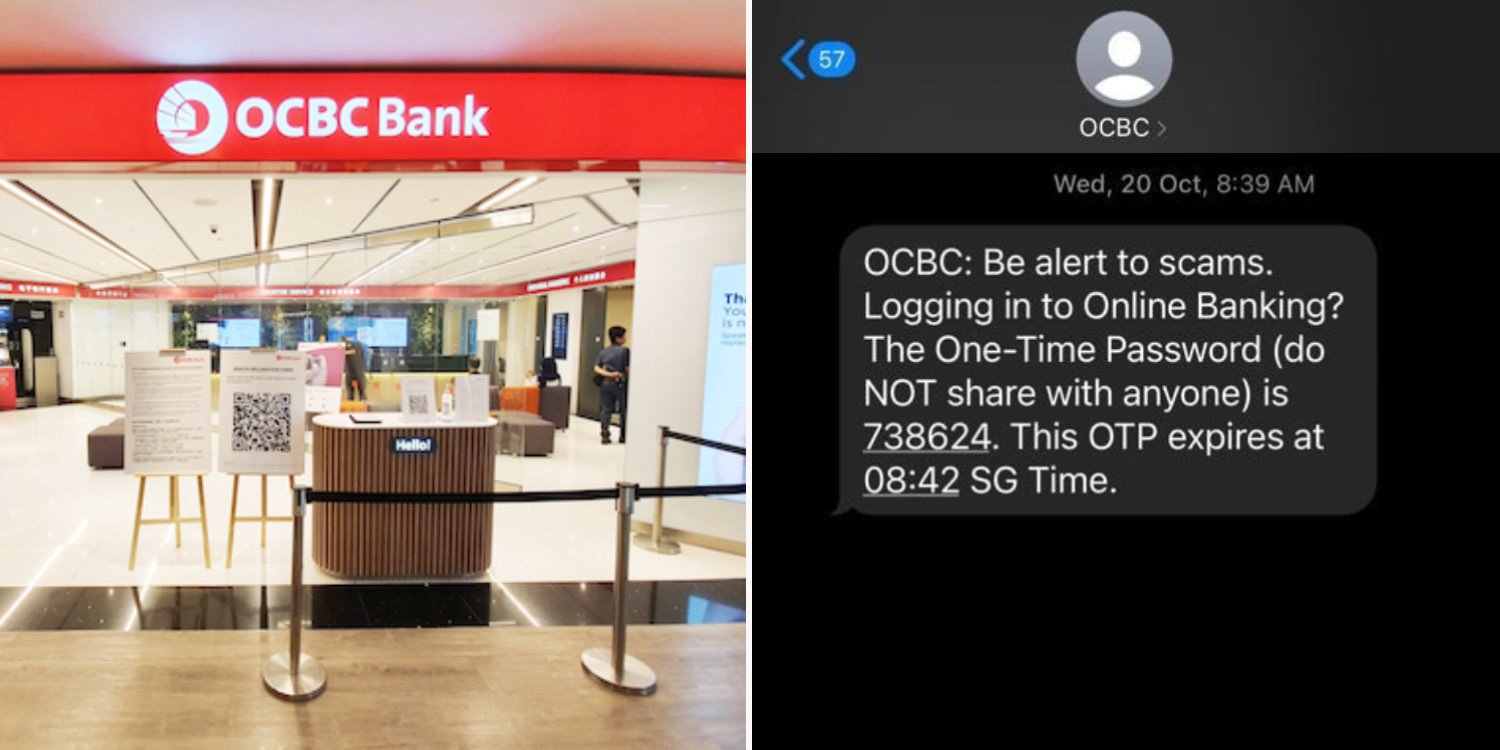 Don't let this incident define the rest of your life.

MustShareMail: The OCBC Scam Shouldn’t Discourage Victims, We Can Overcome It

In Dec 2021, numerous media outlets reported on the major OCBC phishing scam. The reports usually end with the bank warning clients to be more vigilant and explaining that they have no further obligation beyond trying to stop the payment.

I’m one of the faceless victims of the scam and this is my story.

I’m writing not with the objective of recouping the funds — I’ve been told repeatedly that the only thing the bank can do is try to block the payment. But they’re not obligated in any way to recover the fund. They merely have to trace where the payment was wired to.

This letter is part of my self-therapy. It’s for me to turn off the voice in my head that keeps blaming myself for how stupid and incompetent I am as a parent, and as a husband for clicking on a link in panic.

The day that changed everything

For me, Christmas Eve 2021 will forever be etched in my memory.

I’m a husband and a father of a primary school-going daughter. I’m in my early 40’s, living a modest life on a humble income. The main reason I have money with the bank is to avail of a fixed deposit (FD) rate. I had been hoping to gain a little interest to take care of my daughter’s extra needs each year.

This money, that I had enrolled on preferred interest on FD, is now completely gone. Everything I had put in suddenly went to 3 different accounts in the United Kingdom (UK) belonging to the fraudster.

What I was hoping would be small interests gained from the FD to buy my daughter’s favourite Demon Slayer comics, her school uniforms (she grows too fast), shoes, pocket money, or the annual staycations that I promise her are now no more.

Since I technically did not fulfil the FD conditions, I will also incur a penalty from the bank. Prior to this incident, I had no idea that an FD can be transferred out. Now, this fund is in the hands of criminals, and I’m left with nothing but a penalty.

The helplessness that followed

Weeks after the fraud, I felt both angry and embarrassed that such a thing could happen to me despite my vigilance.

Whenever the bank informed me that my own carelessness caused this, all I could do was accept the truth. After filing the police report and requesting to block the funds, the only thing I could do was wait for the inevitable news that the money was officially gone.

In a perfect world, there would be some way to trace who had spoofed the SMS. We could catch the owners of the accounts the money was wired to. But this is just wishful thinking.

The screenshot below shows the SMS that started it all — the 2 previous messages are from OCBC, while the last one is a phishing link, in the same thread.

By clicking on the link and accessing the fake site, I unknowingly granted the fraudster access to my account. Since then, I’ve thought of completely blocking the number from any bank but realised that legitimate OTPs, announcements, and advisories will get blocked too. There is no protection except being hyper-vigilant.

The anxiety that overwhelmed me

The trauma from the theft has left me with anxiety and panic attacks. Multiple triggers would start new panic attacks that would happen randomly.

My heart still races and I get cold sweats whenever a seemingly harmless event happens.

These include receiving an SMS from an unknown number, seeing mail from any bank, the smell of kopi-O (I had to sit at a coffee shop when I received the news), and even using GrabFood on my phone — because when I heard that my account had been emptied out, I was too frazzled to the point that I forgot that my daughter was at home waiting for dinner. So I had to order some food from McDonald’s for her.

When a police officer contacted me to explain what had happened, these traumatic events replayed in my head. When I do any bank-related errands, panic attacks afflict me.

At one point, I felt anxious about being anxious and the panic cycle started all over again.

How I recovered from the OCBC phishing scam

A few weeks on, acceptance has set in.

I’ve somehow been able to function and stop blaming myself. I’ve accepted that I didn’t do this to myself, a criminal did.

Any assistance from the bank to somehow make it right is entirely up to OCBC’s goodwill.

The self-blame and feeling of helplessness overwhelm me, but life must go on.

Some introspection has gotten me through the days and nights since 24 Dec. The points below help me turn off the voice in my head that robs me of my rest and peace:

1. I have to stop blaming myself

I got rid of the notion that the reason I got cheated was that I wasn’t vigilant enough. It’s like assuming that a colleague didn’t do well on a project because they didn’t put much effort into it. But there could have been other circumstances affecting their work. Perhaps there were issues beyond their control like an emergency or a family commitment — everyday things that happen to all of us.

Now that I’ve failed at being vigilant, I have to accept that there was a conscious effort to commit fraud against me by criminals. I am a victim of a crime and not a victim of stupidity.

If there is one thing I learned in this ordeal, a little empathy goes a long way. The people that have supported me in this difficult time have told me, “I can’t help your situation, but I can help you get through it.” In fact, a little empathy is all I need. The money lost, I can work for and slowly save up again. I’ll work even harder for it, and appreciate it even more.

2. Hindsight does not change anything

Despite the bank’s claim that it was my incompetence that stopped me from realising what was bound to happen when I clicked on a fake link, the truth is there was no way I could have prepared for it. From what I know, around 470 OCBC account holders had fallen victim to the fraud. Since so many people were cheated of their hard-earned savings, surely not everyone had failed to anticipate what was about to happen to them.

To the other victims, people may blame you directly or indirectly for what happened. They may say you were careless for falling for the scam, but at some point, you’ll have to accept that a criminal did this to you. This incident does not define who you are, or who you will be in the future. What you have is the present, to tell yourself that you will overcome this setback somehow.

3. Life is inherently not fair

I used to think that bad things don’t happen to good people. Certainly not a father who had nominated his hard-earned income for a fixed deposit just to give something extra to his daughter. But the reality is, at some point in our lives, bad things can and will happen.

The world being fair is an illusion, and by accepting this notion I can say to myself that just because a bad thing has happened to me, it does not mean that I’m a bad person.

No, it’s not karma. It’s not that I don’t deserve to have money saved in a bank.
Someone committed fraud and the money I had entrusted to the bank was stolen. I did not cause this, and there was nothing that I did in the past that made me deserve what I got.

4. Live in the present

Yes, hard-earned money lost is painful, no matter the amount. But what people have done to you, is on them. How you respond to it moving forward is on you.

For me, the pain is not really about the amount I lost, but all the extra work I had put in, all the dinners I missed, all the weekends that I sacrificed, to earn just a little more from the job that I love. All the things I should have spent with my wife and daughter.

Moving forward, I will be more careful of how I spend time.

In the last few days, I’ve slowly regained my sleep, been able to enjoy sports again, and most importantly, learnt to practise gratitude.

I’m healthy, I have friends, and have a renewed appreciation of time.

Gratitude does not mean I am ready to be thankful for what has happened. I’m still a little bit angry. But gratitude was the reason why I had an OCBC account in the first place — for my wife and daughter, who are with me, always.

My love for my wife and for my daughter are assets no one can steal from me. I hope you’ll find that too. Have a blessed 2022.

*Name has been changed as the victim requested anonymity.