The cause behind the combustion is unknown.

Oftentimes, commuters would become frustrated whenever they come across delays along any MRT line in Singapore.

When such incidents happen, they’re often due to track faults or other technical issues. But on Tuesday (24 May), a power bank on fire became the unlikely culprit behind a delay at Somerset at MRT station instead.

As a precaution, all commuters disembarked from the train. 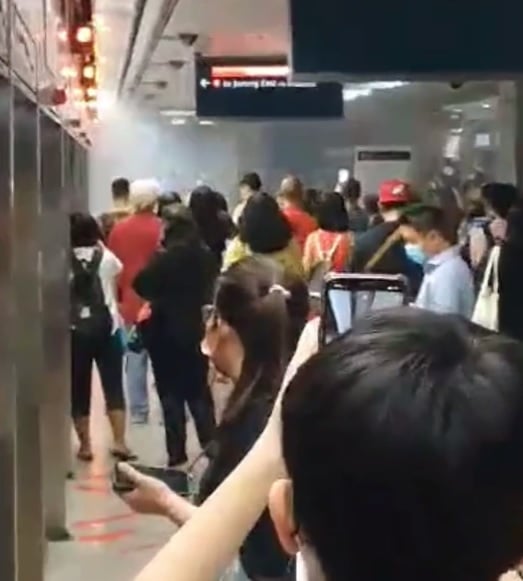 Thankfully, no injuries were reported.

No injuries reported after power bank catches fires in train

On Tuesday (24 May), a power bank reportedly burst into flames in an MRT along the North-South line (NSL) at around 12.10 pm.

According to The Straits Times (ST), a commuter was able to quickly put out the fire after the train stopped at Somerset Station.

As a safety precaution, SMRT personnel evacuated all commuters from the Marina Bay-bound train.

Thankfully, there were no injuries reported. However, the affected train has been withdrawn to the depot for checks.

There is also no mention of the brand of power bank that caught fire.

Videos of the incident did their rounds on social media, leaving many perplexed by the thick smoke filling up the underground station.

TikTok user @bossstanlee2203 shared their point-of-view of the incident via a short video clip.

The 6-second clip shows thick smoke filling one end of the station as curious commuters took the chance to document the scene.

It then cuts to MRT personnel taking control of the situation, seemingly evacuating the affected train.

Hope investigations can pinpoint cause of power bank catching fire

While the reason behind the power bank catching flames is unknown, it may be wise to pay extra precaution to our own electronics.

Although convenient, these supercharged batteries could easily go off if left unsupervised.

Let’s hope this investigation will bear fruit so authorities can figure out what caused the combustion. More importantly though, we’re glad that everyone aboard the train is safe.

Featured image courtesy of @bossstanlee2203 on TikTok and Singapore Atrium Sale on Facebook.