Red Lion Parachutist 3WO Jeffrey Heng Is In Stable Condition

During the National Day Parade 2022 celebrations, a Red Lion parachutist had a rough landing and tumbled onto the ground.

Third Warrant Officer (3WO) Jeffrey Heng’s crash caused immense concern among Singapore residents, as many wondered if he was doing well after enduring such a fall.

A day after the parade, Defence Minister Ng Eng Hen has some good news: 3WO Heng suffered some injuries but doesn’t require surgery.

According to Mr Ng, the Chief of Defence Force (CDF) and Chief of Army (COA) visited 3WO Heng at the hospital.

They were pleased to report that he is currently in stable condition.

“Suffered some injuries due to the hard landing, but no surgery required,” said Mr Ng.

Even though 3WO Heng will need time to undergo rehab, the Defence Minister noted that he is expected to recover fully.

There was an outpouring of support and well-wishes for the wounded Red Lion, as many sent him their well-wishes in the comments section.

Despite the mishap, they thanked him for braving strong winds to keep the NDP performance going. His bravery also earned him their respect. 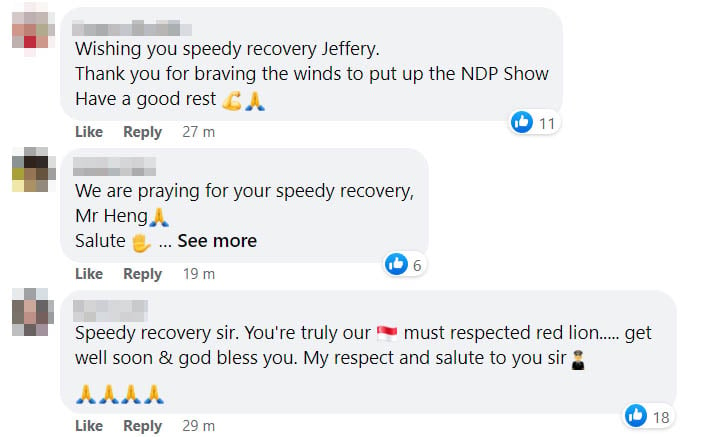 Another said the incident taught her never to take such performances for granted, as it involved significant risk.

Most comments were from others who wished him a speedy recovery.

Thank you for making Singaporeans proud every National Day

Despite the high level of risk involved, the Red Lions are well-known for their free-fall jumps during NDP celebrations.

However, this incident isn’t the first to have happened. In 2021, another Red Lion had a hard fall during a test jump in Bishan and had to be stretchered off.

But hopefully, this will be the last of such incidents in a long, long time. We thank the Singapore Armed Forces Parachute Team for doing their best to make Singaporeans proud every National Day.