In the age of streaming, where shows from all corners of the globe are easily accessible with a few clicks and a stable internet connection, it’s safe to say that the popularity of Singapore productions isn’t exactly what it used to be.

But not all is lost for local TV.

Ever since it started airing, the 20-episode serial Your World In Mine has been garnering rave reviews — even from those who admit they haven’t tuned into a Mediacorp drama in years.

A bulk of the praise is reserved for Richie Koh. The actor’s portrayal of Zheng Tiancai, an intellectually challenged young adult, has resonated with viewers and shot him to new levels of fame and attention. 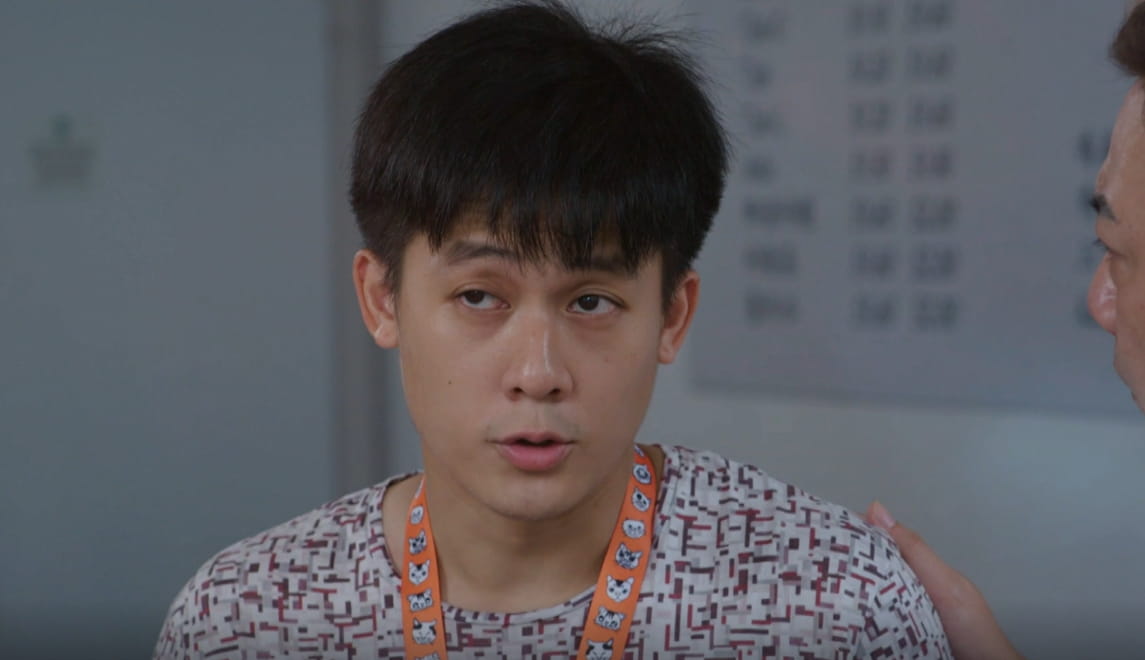 With an abundance of other entertainment platforms these days, it’s interesting how Your World In Mine has managed to captivate viewers while also shining a light on what many Singaporean families with special needs children face on a daily basis.

MS News sat down for a chat with Richie, who told us how he prepared for the role, his thoughts on the overwhelming response to the show, and how playing Tiancai has broadened his view on not just those with special needs, but on life in general.

A 9-to-6 office job never quite appealed to the fresh-faced 29-year-old star. He didn’t find any particular joy in studying either. 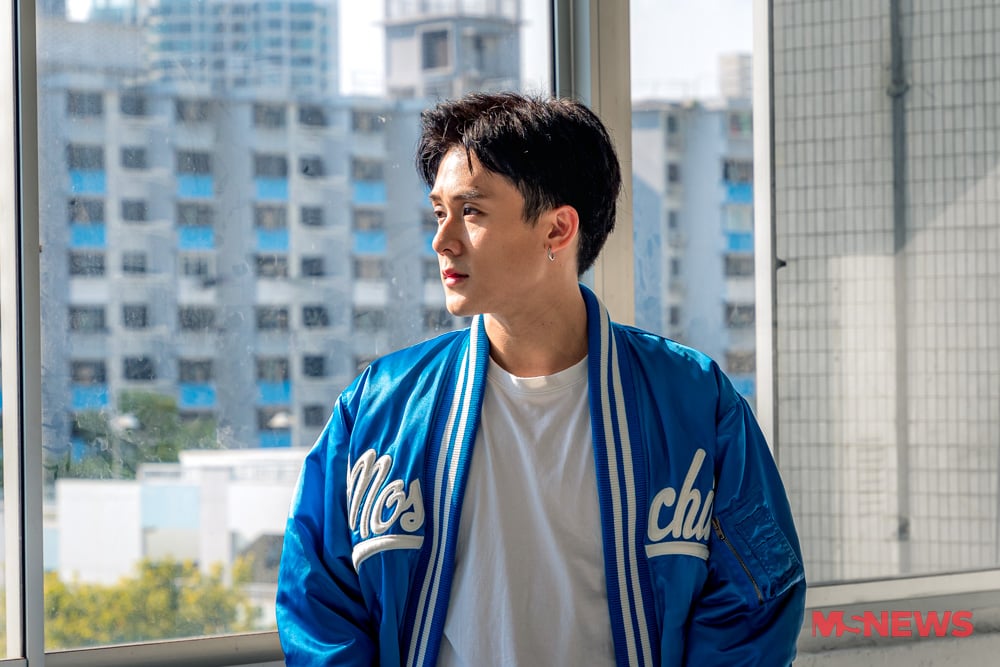 So when Richie was scouted for the Channel U talent search reality competition Hey Gorgeous while studying at Ngee Ann Polytechnic in 2013, he simply saw it as a chance to skip class.

“It was just one day of cheap thrills,” he told MS News, chuckling. 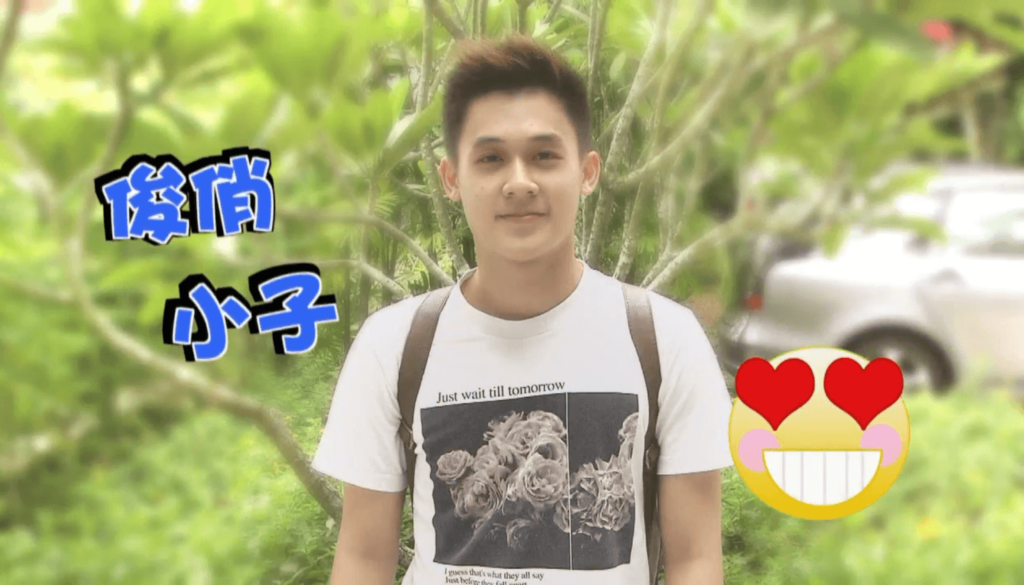 Perhaps because he had no expectations, Richie was able to just be his natural self. This helped bring him all the way to the finals, where he emerged the runner-up.

It was only after he completed his National Service that he took acting as a profession seriously, landing his first drama role as an army boy in 2017’s military drama When Duty Calls.

Describes Tiancai as “pure” & “back to basics”

Your World In Mine tells the story of Zheng Tiancai, a 21-year-old with the mind of a seven-year-old. 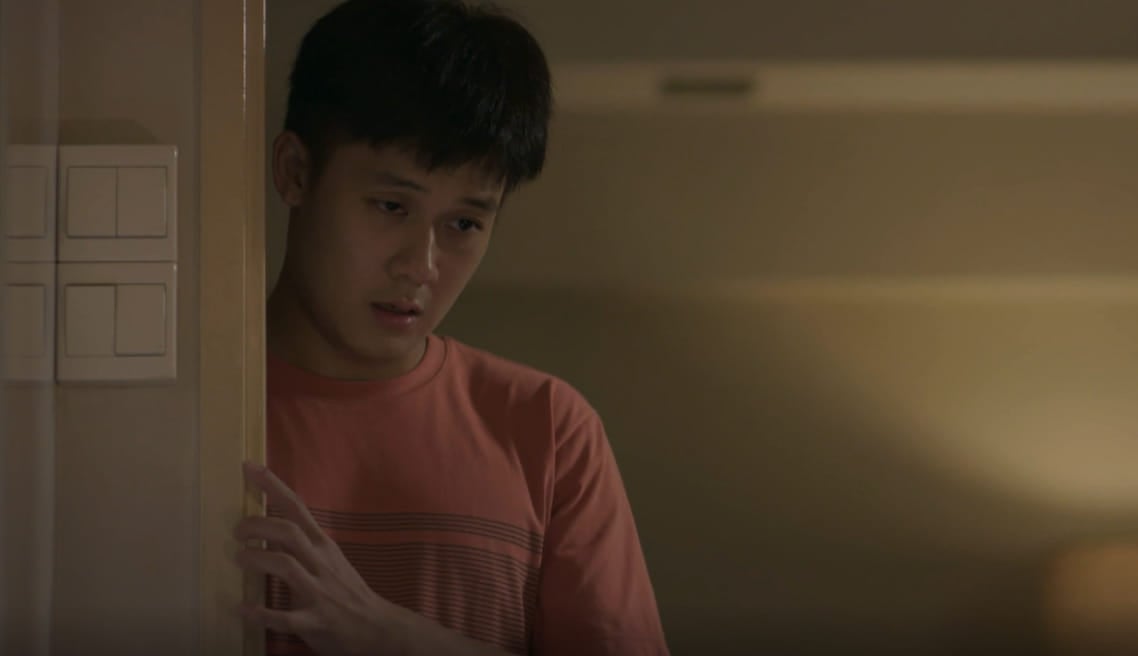 Audiences lauded Richie’s depiction of an intellectually challenged adult, who may struggle with communication but never fails to greet everyone with a smile and his trademark “Hello”. His love for his family is also very heartwarming.

Richie describes Tiancai as “simple, caring, and back to basics as a human”.

When we’re born, we are just like Tiancai. But as we grow older, we might stop being as pure as him.

Despite having the mental age of a child, Tiancai manages to inspire the other characters in Your World In Mine, as well as Richie himself. 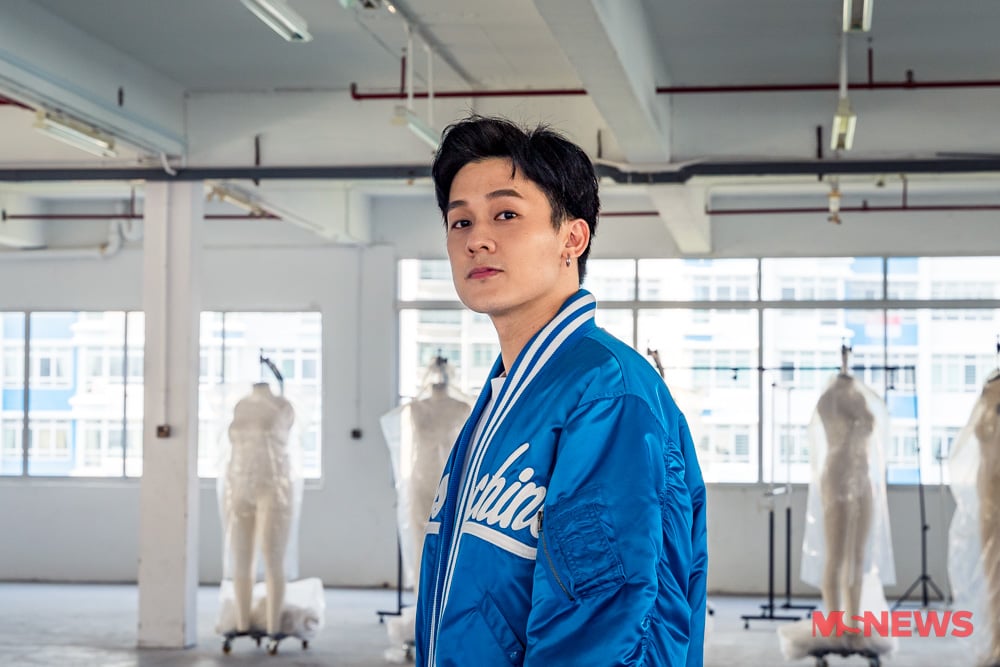 One valuable lesson the actor took away from the role is not overcomplicating things.

It’s a reminder for me in my life. Things can be complicated, but if we don’t think so much, a lot of things can be much simpler.

Judging from how Richie described his reaction to reading nasty comments from haters, an unfortunate side effect of fame, it seems he already adheres to this philosophy.

“There’s bound to be people like that,” he shrugged. “If you take it negatively, then it’s very hard to move forward. Just ignore them and move on.”

He also came away with a new understanding of special needs individuals.

“I used to think that we shouldn’t disturb them and just leave things to their caretakers, but they also want to show love and be a friend,” he said.

They’re also growing and learning just like anybody else. They just might be doing it at a slower pace or need an extra helping hand.

A major part of nailing down a good acting performance is in the preparation process.

Instead of watching other onscreen depictions of special needs characters, Richie turned to documentaries and met with two intellectually challenged people and their families to form the basis for portraying Tiancai.

He also tried to achieve a more realistic look for Tiancai by sacrificing his sleep as well as his strict diet and started eating whatever he wanted.

Naturally, the actor harboured fears that he wouldn’t give a convincing enough performance.

“There was a moment when I thought that this is was either going to do well or be a flop,” he shared. 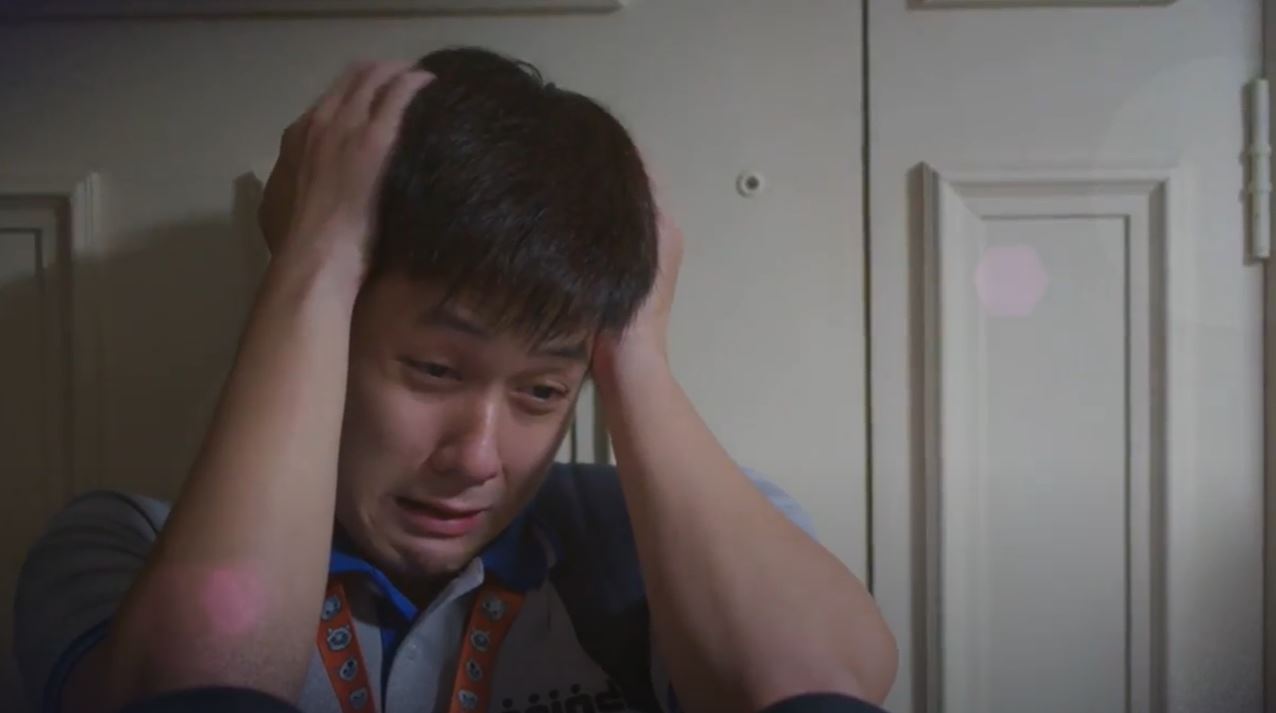 This ended up creating quite a lot of pressure on set, so in the end, Richie declared that everyone should stop thinking so much and just “follow [their] hearts”.

That may very well have been one of the secrets to the show’s success. According to Richie, if a take didn’t touch the director, then the entire shot wouldn’t make it to the final cut.

They would also choose to film a scene another time if they didn’t have the right “feel” for it at the moment instead of doing it for the sake of wrapping things up.

Received overwhelming praise for his performance

Well, as everyone can see, the results turned out spectacular. Richie did such a good job that parents of special needs kids reached out to him to praise how he played Tiancai.

“I was quite happy that many parents texted me to say thank you for portraying Tiancai like that,” he smiled. “They were glad that we brought this awareness to the public.”

That was the most rewarding moment for me.

He even caught his own mum crying while watching the drama, leading to some light-hearted banter between the two.

One person who wasn’t expecting the acclaim was Richie himself, who called the overwhelming praise for the drama a “surprise”.

The fact that Your World In Mine was getting popular hit him when he started receiving a barrage of interview requests while on holiday in Thailand.

Many viewers even said they returned to Channel 8 thanks to the show, which he’s heartened to hear. The interest snowballed further after veteran actor Chen Hanwei made a post praising Richie and the other actors.

“I’m… just thankful that he praised my acting,” Richie mused after struggling for a while to find the right words. “I can only receive what he’s said, so I’ll just show my gratitude.”

Even the TikTok crowd appreciates his performance, with snippets of Tiancai going viral on the platform.

Again, all a humbled Richie can say about the feedback is that he’s “grateful” and “thankful”.

A memorable moment from his acting career

When we asked Richie to name the most memorable moment from his career as an actor, he recalled the part in Your World In Mine where Tiancai had a meltdown after losing his beloved pet snail. 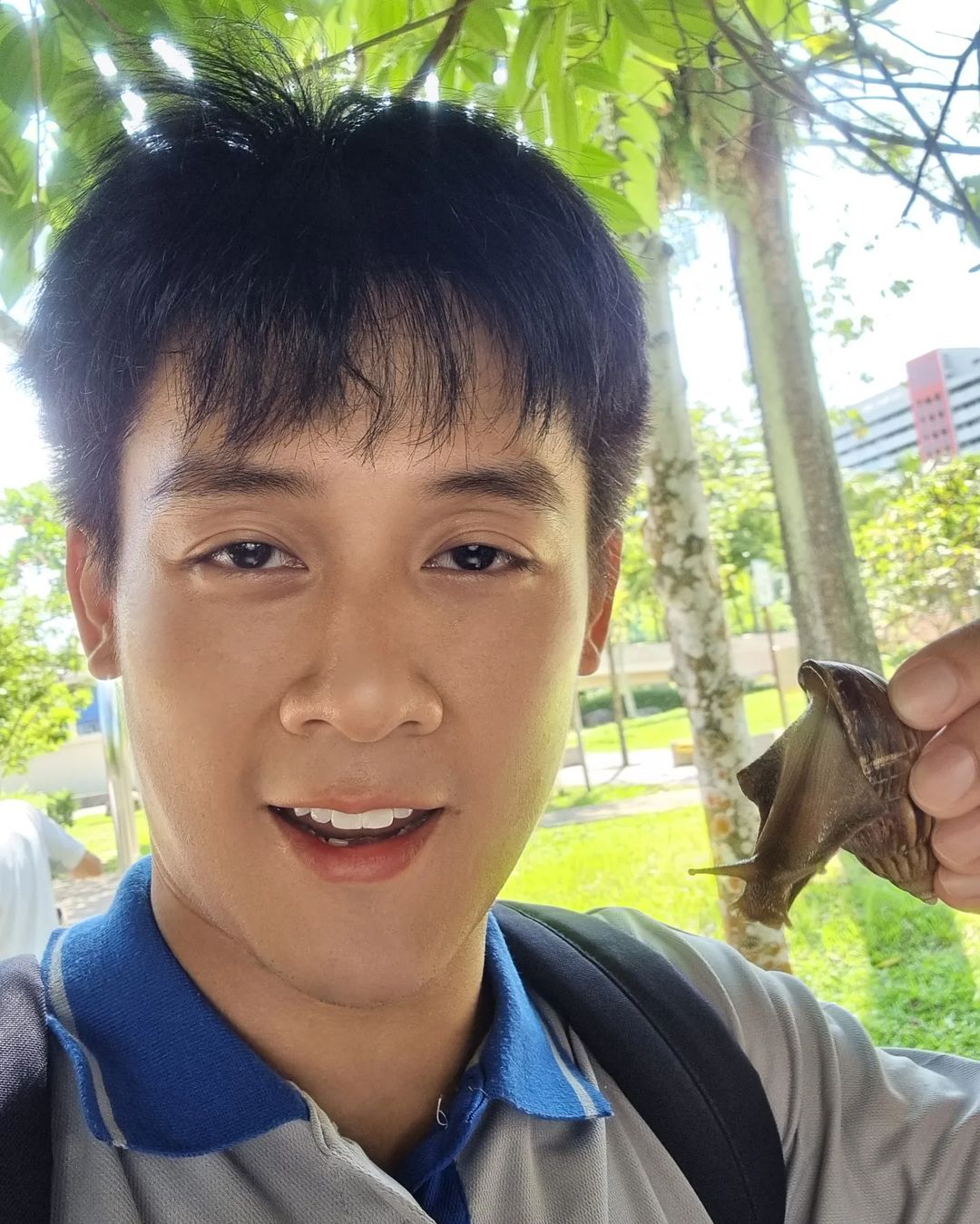 To convey Tiancai’s distraught state, Richie went around shouting and banging on the door of the HDB flat where they were shooting.

This ended up attracting attention from actual residents in the area, who weren’t informed that there would be a film crew there.

“All the neighbours stuck their heads out to see what was going on,” Richie said with a sheepish laugh.

They were afraid that someone might call the police, but luckily, they merely aroused curiosity.

Your World In Mine might have been Richie’s breakout performance – he even considers it his biggest achievement so far – but this is just the beginning for the 29-year-old.

For one thing, he shows no fear in tackling potentially challenging roles, whether it’s a character like Tiancai or a gangster boss.

In fact, he’s raring to take on more of such serious roles, proclaiming, “Bring them on!” 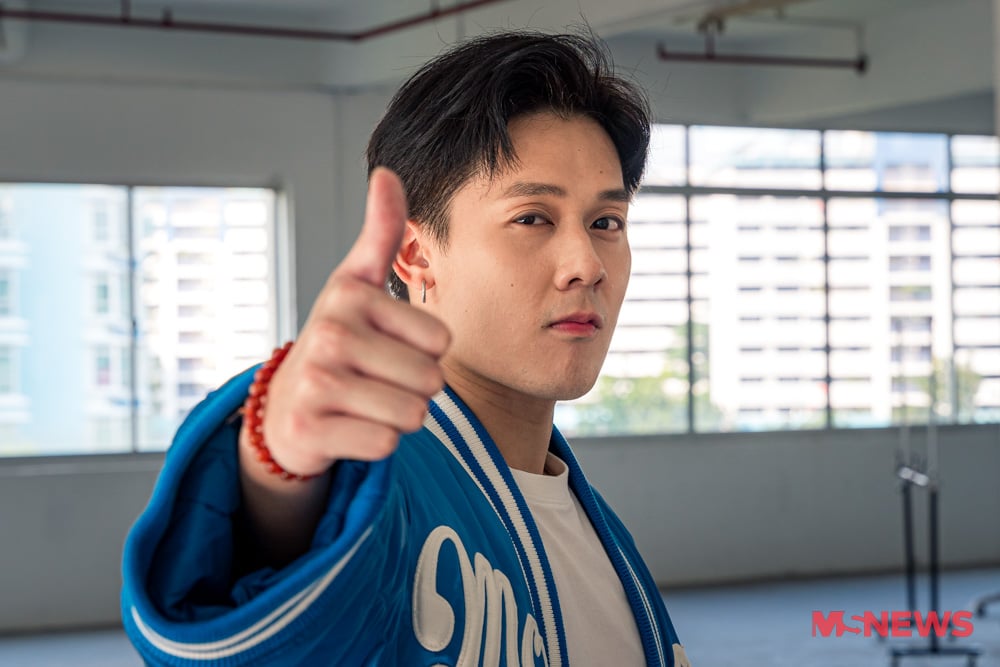 But of course, Richie isn’t an all-work-and-no-play kinda guy.

He usually relaxes by watching shows. Recently, he’s enjoying Korean dramas Big Mouth and Alchemy of Souls, sometimes while chilling with ice cream and snacks or an alcoholic beverage.

He’s currently on a break, but fans can look forward to catching him on the big screen in the upcoming fengshui action flick The Fatekeepers.

The movie, in which he plays a cancer patient, was filmed before the pandemic but is likely to be released later this year.

One of the charms of Your World In Mine is how down-to-earth and realistic it is, especially for Singaporeans.

While it has its share of dramatic moments – it is still a TV show after all – the issues that the characters face are extremely relatable, which may have also contributed to its popularity.

Most importantly, its respectful portrayal and representation of mental health issues and intellectual disabilities deserve commendation.

If you haven’t caught up with Your World In Mine yet, you can do so on meWATCH here.