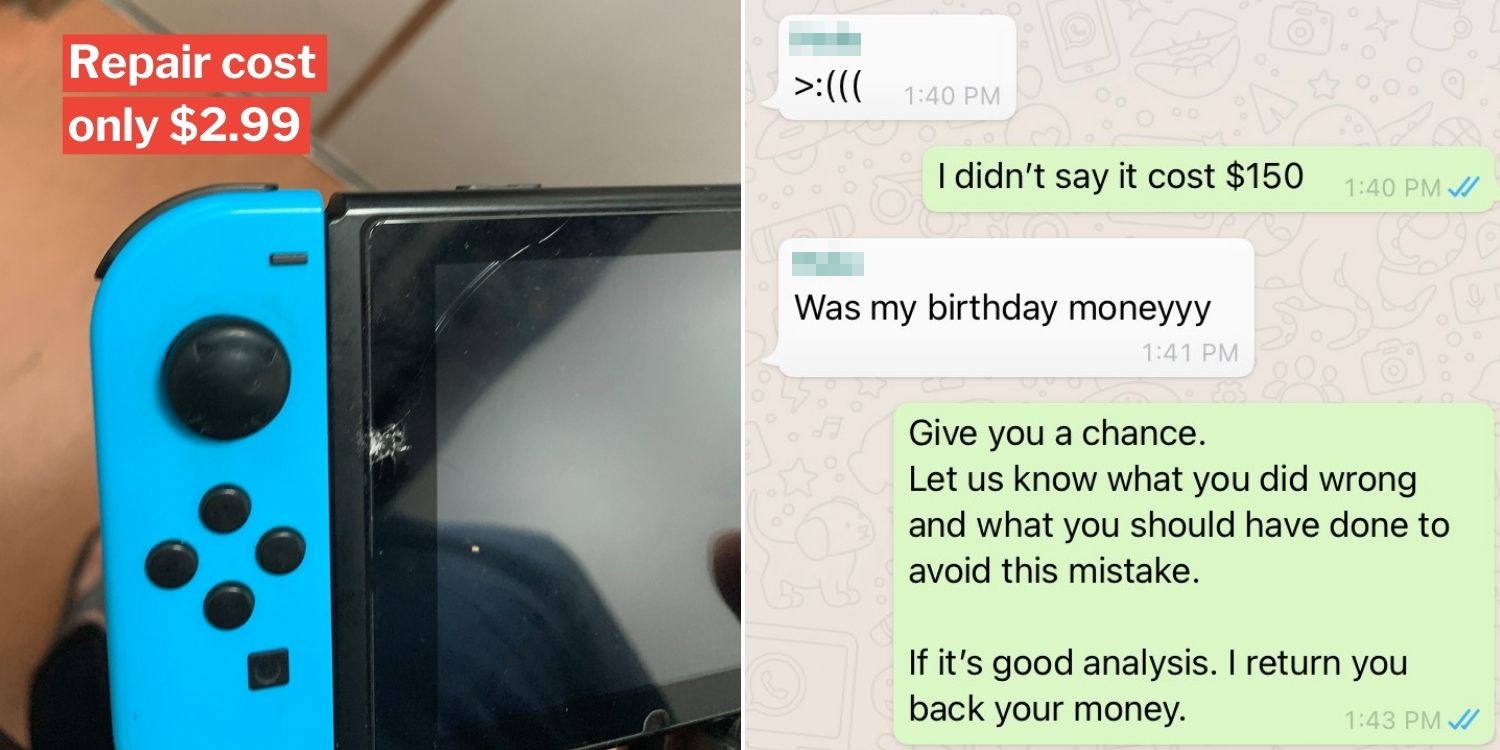 Sometimes children need tough love in order to grow. When you see them fail, it’s important to ensure they learned their lesson.

On Tuesday (10 Nov), a father named Barney shared that his daughter scratched his Nintendo Switch. In a WhatsApp message, the daughter negotiated the repair costs for the console and assumed it was worth $150 based on her research. 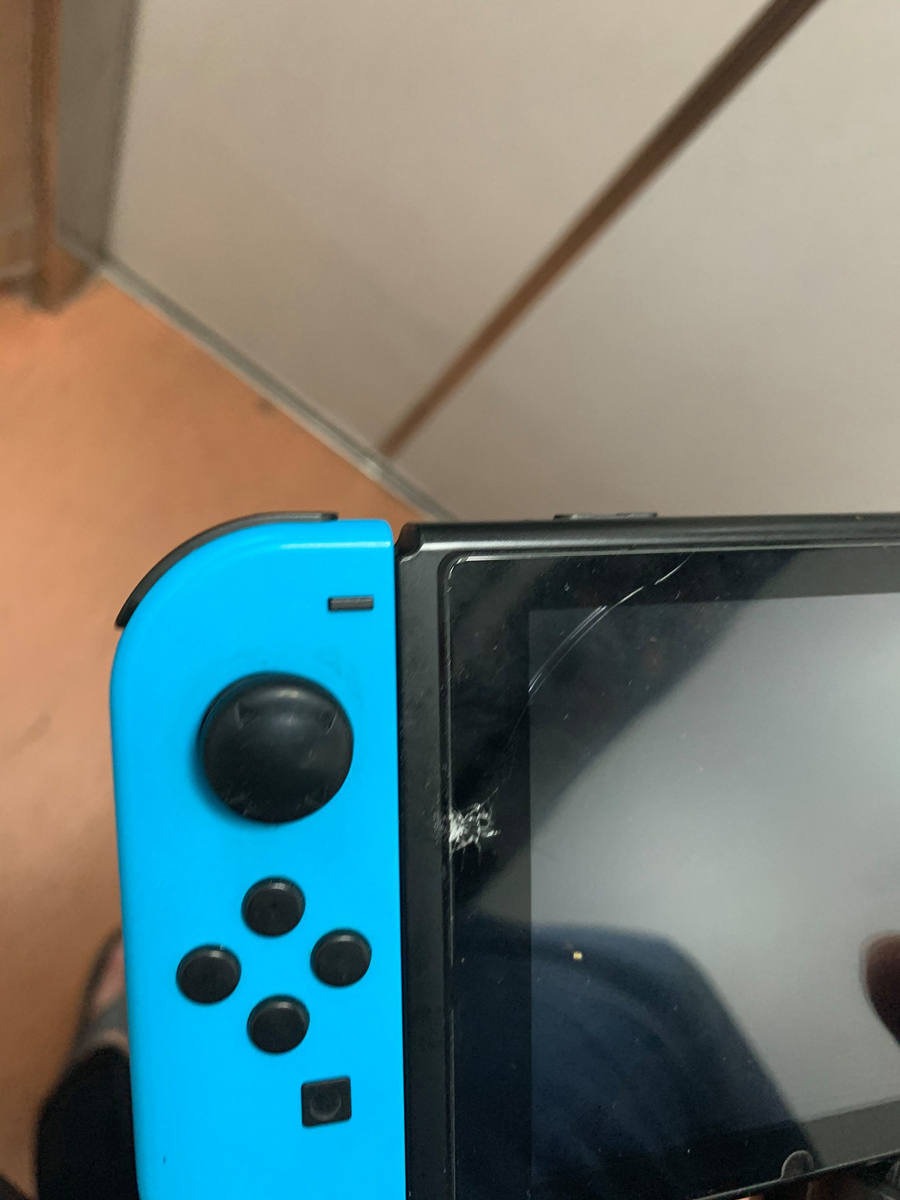 Upon completing his own research, the dad discovered that repairs for a scratched Nintendo Switch screen protector only amounts to $2.99. Once the daughter found out the truth, she wrote an essay to reflect on her mistake.

Let’s take a look at this dad’s mischievous attempt at educating his daughter.

According to the post, the daughter broke her dad’s Nintendo Switch screen. To atone for her actions, her dad asked her to pay for a portion of the damage.

She did her own research and assumed that the repair costs would amount to $150.

Next, the pair negotiated for the amount they’ll contribute. The daughter initially offered $60, but her father wanted her to contribute more so it was fairer. 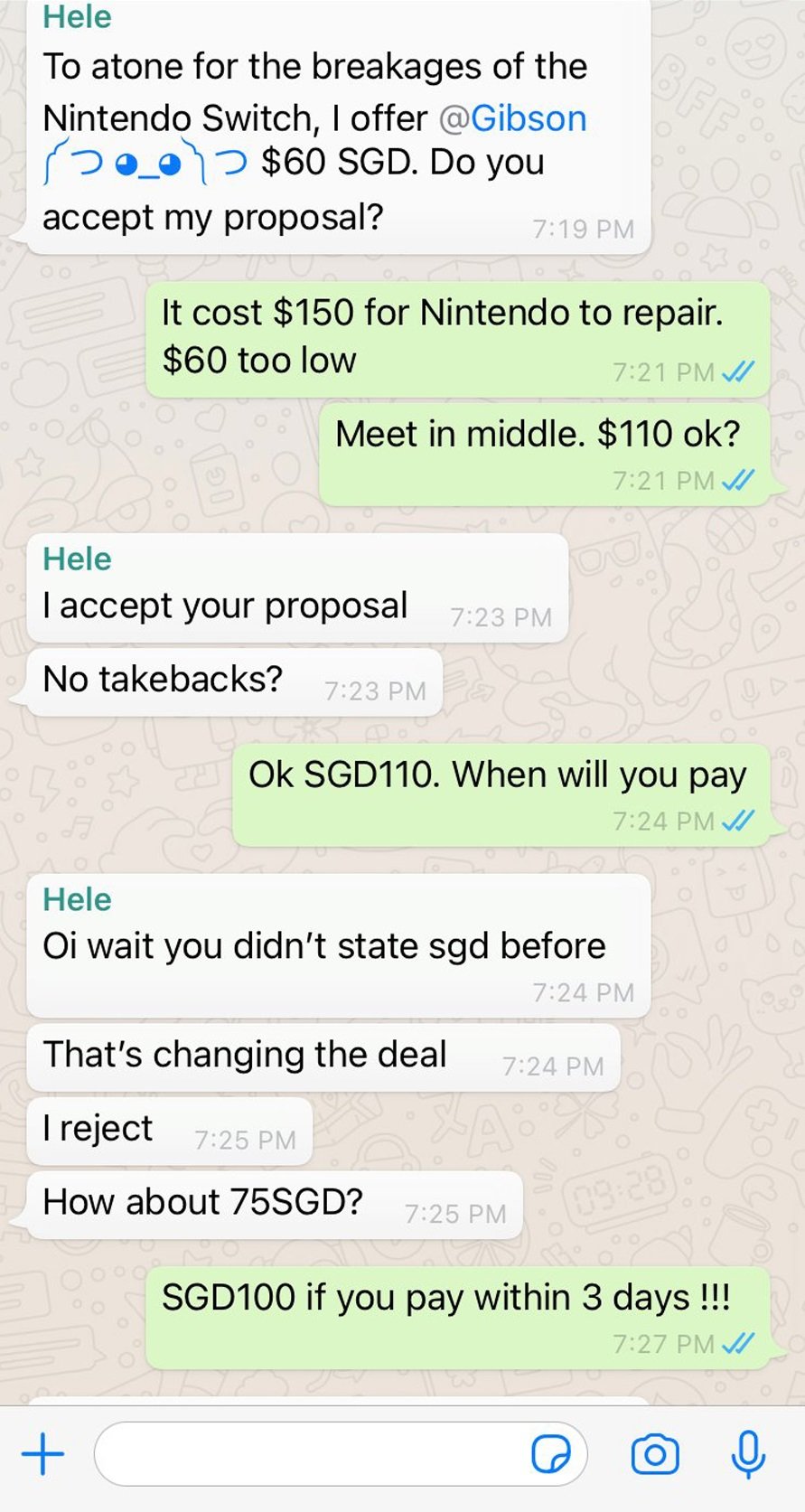 Eventually, the daughter conceded and agreed to contribute $88 for the repairs. 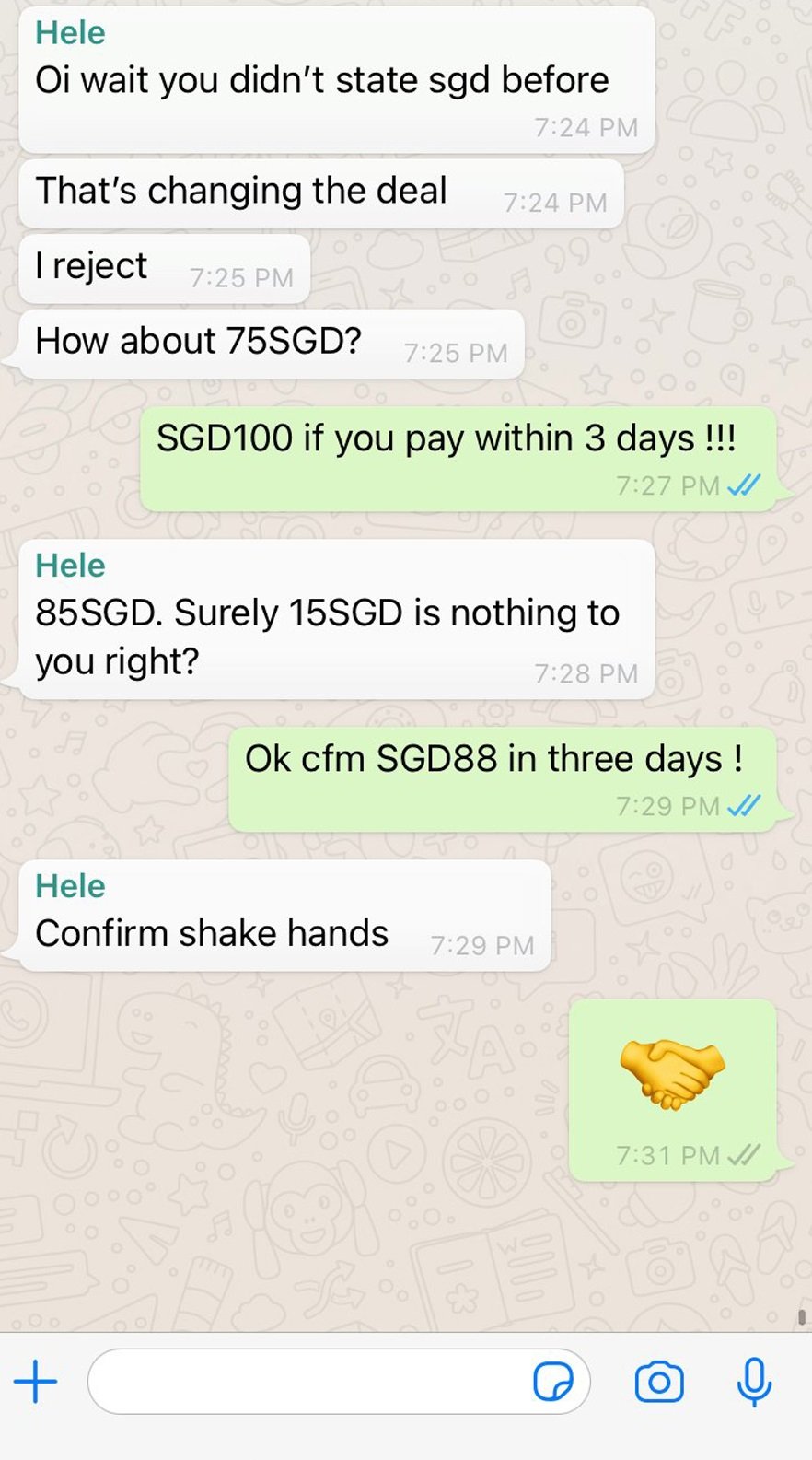 Similar to a real-life agreement, they closed the deal with a handshake emoji.

Most screen repairs cost hundreds of dollars, but this will depend on the extent of the damage. In this case, since only the screen protector was cracked, the father knew he only needed a replacement.

However, he was happy to trick his daughter into paying more than the market price.

Daughter finds out the real price

As he was a loving dad, he eventually revealed the cheap price tag for the repairs.

The daughter called her dad mean because she used her birthday money as payment.

Fortunately, he gave her another opportunity to get her money back — she must explain what she did wrong and what she should have done instead.

If she could impress her dad, he’d return the $88 to her. 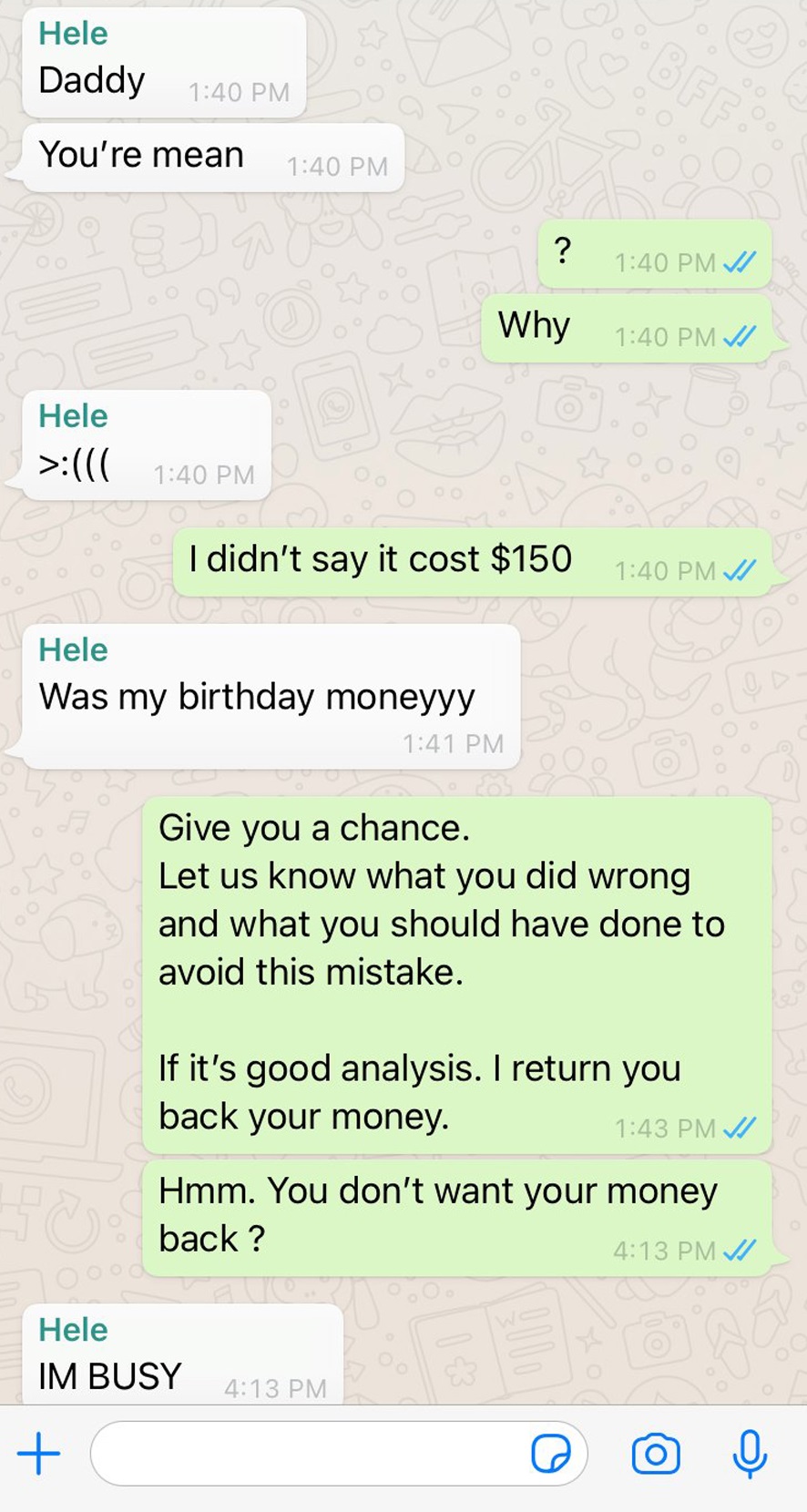 We can all relate to the woes of having too much homework.

For the daughter, it seemed that her 90-page reading for home nursing was the biggest obstacle to her impressive explanation. Hence, she demanded a deadline extension and her father agreed. 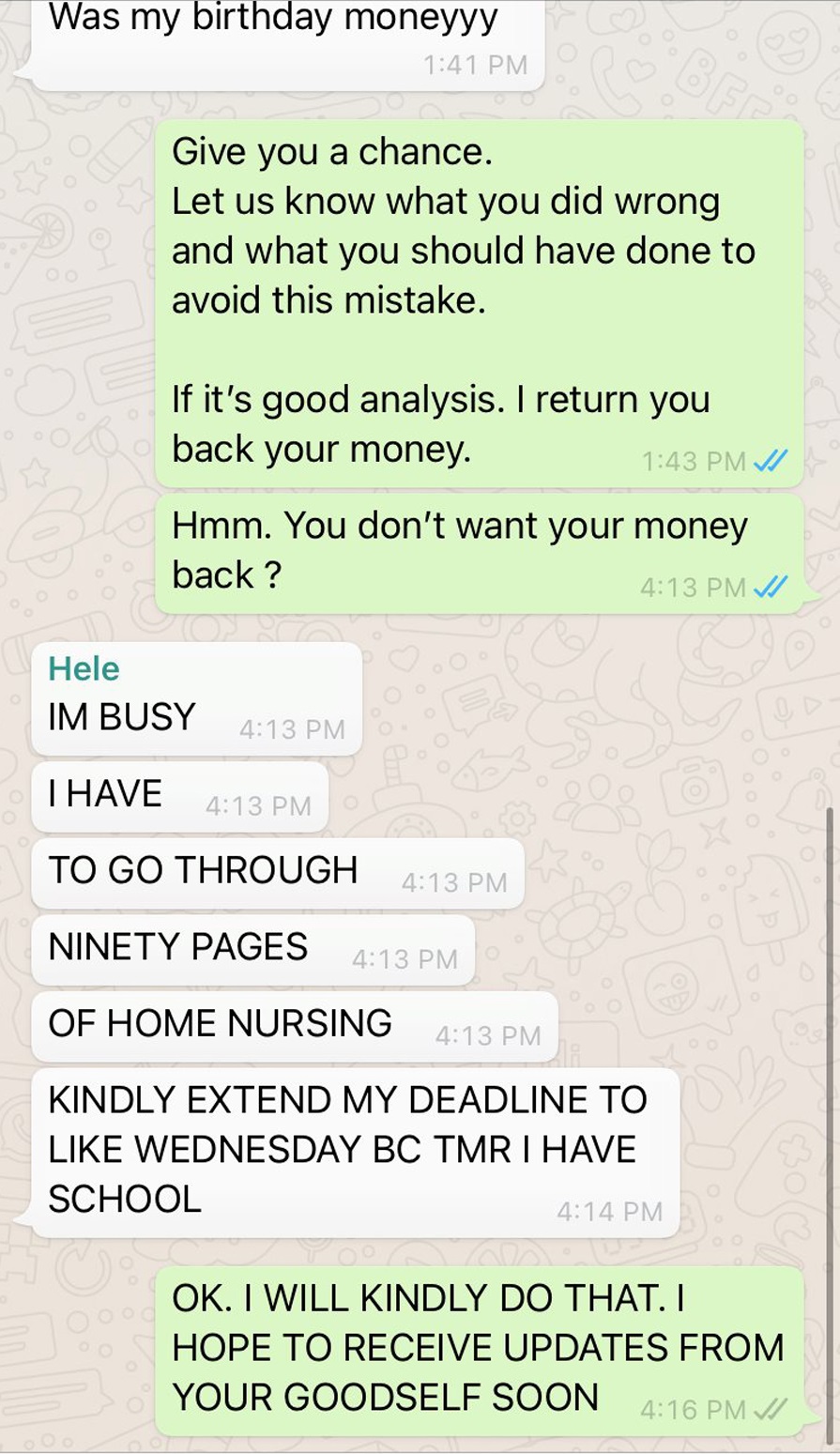 Daughter reflects on her actions

In an attempt to get her money back, the daughter detailed how she arrived at her overpriced estimate.

According to the WhatsApp message, she visited the Nintendo website and learned that they charged $150 for the service. As a result, she assumed that the cost of repairing a screen would be a hefty price.

After getting tricked by her father, she learned that she had overgeneralised. Instead of checking various sources for price estimates, she relied on just one and went with it. Besides the lack of research, she also admitted to jumping to the wrong conclusions based on false evidence.

She found a misleading statement claiming repairs would cost up to $5,000. Although this was an obvious exaggeration, this led her to believe all repairs are priced at a few hundred dollars. 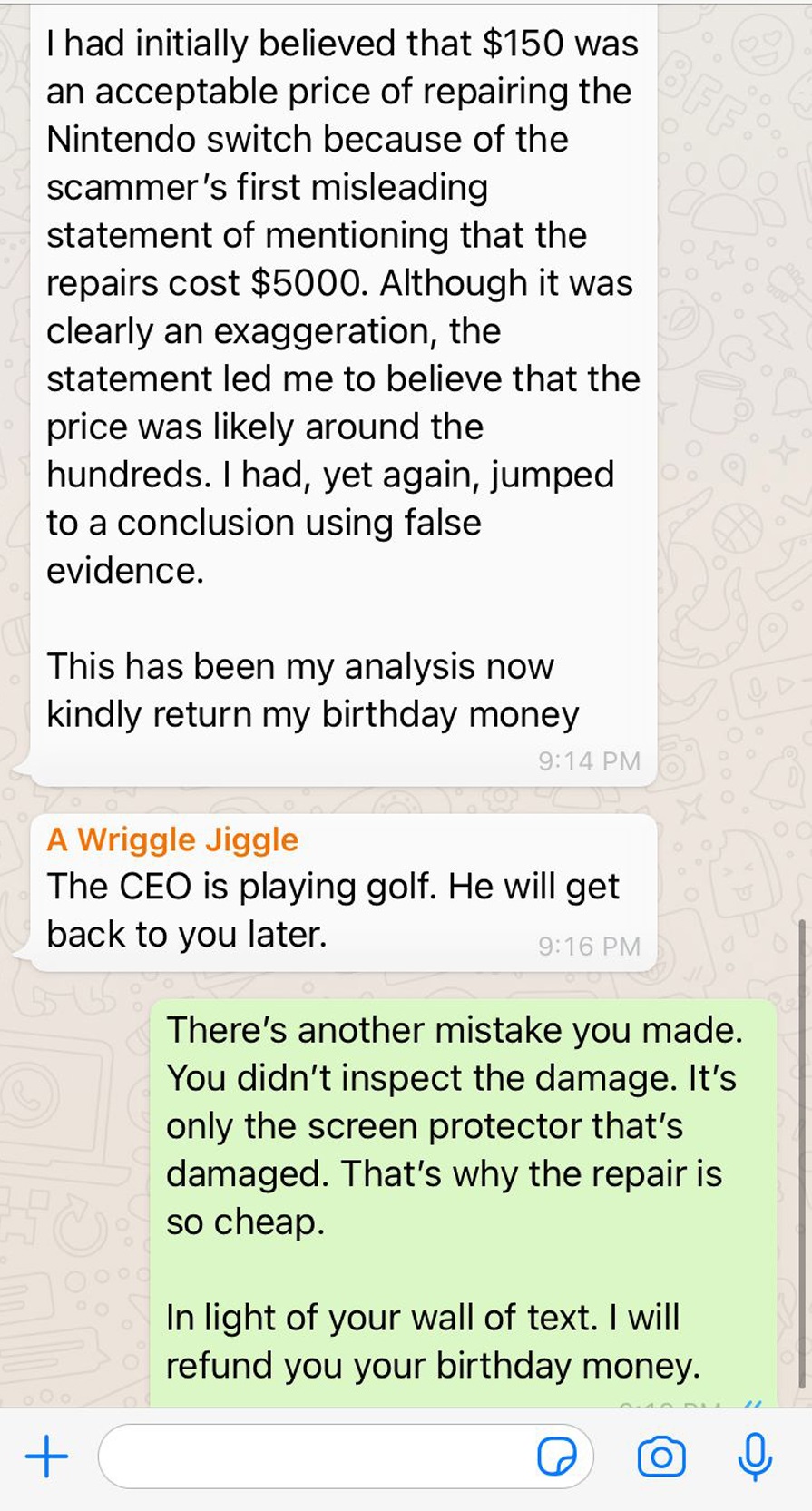 Luckily, her dad was satisfied with her explanation and agreed to give her a refund.

However, he pointed out that she should have inspected the extent of the damage first. Since the screen protector was merely scratched, the repair costs were cheap.

Both children and adults can fall prey to tricks or scams due to lack of research.

We admire this dad for his ingenious approach to teaching his daughter to think critically and be street smart.

We’re sure she’ll also remember to be honest about any mistakes she makes, to prevent any parties from getting hurt.

How did your parents teach valuable life lessons? Share us your stories in the comments below.