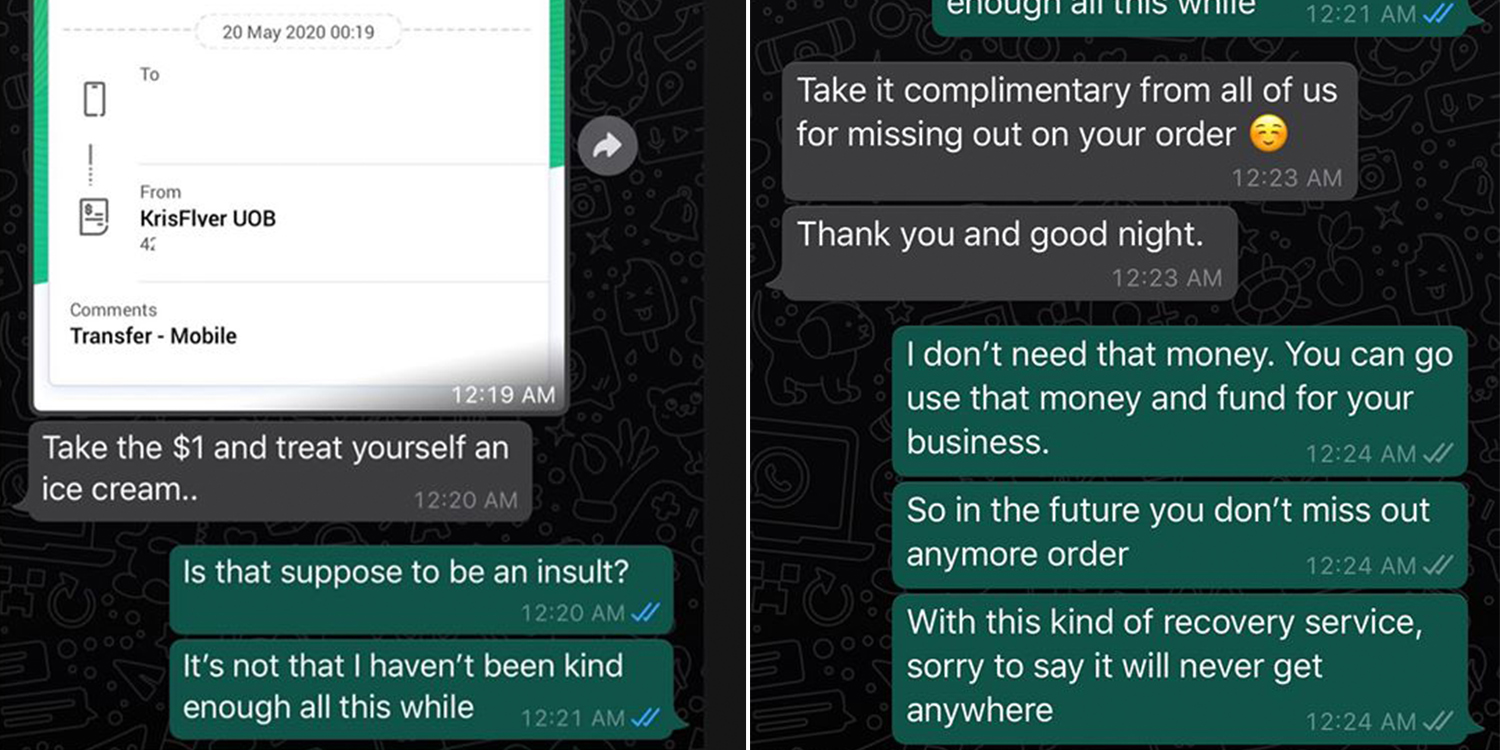 During the ‘Circuit Breaker’, there’ve been many calls for Singaporeans to purchase food and drinks from local sellers, including home-based ones.

But a netizen has taken to Facebook to warn others about his own experience with a home-based entrepreneur over a series of texts and repeated failed deliveries.

Hardy had made an order for custard puffs on his mum’s behalf but eventually never received them, after the delivery failed to arrive on several occasions. 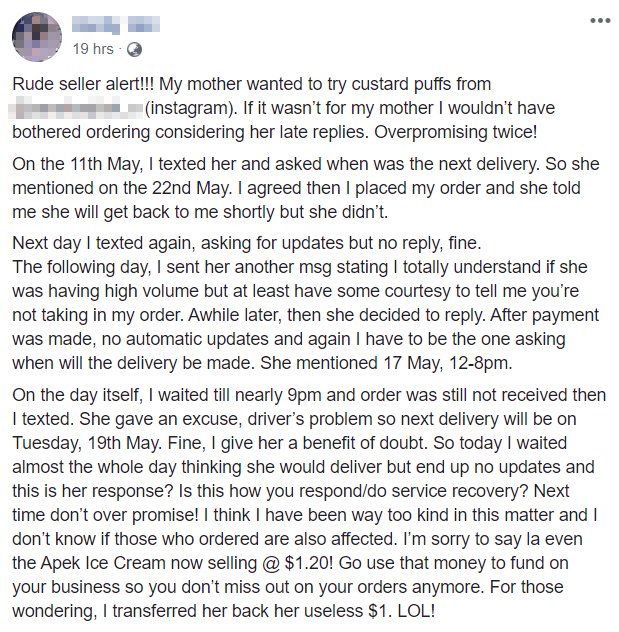 But what really infuriated him was the way she responded after he asked for a refund.

Read on to find out about the whole misadventure.

From the screenshots Hardy provided, it appears that the seller had many orders and from the get-go, their messages warned that there was “high enquiry volume”.

So although Hardy didn’t receive follow-ups on his texts, he understood and decided he’d ask for updates as a reminder for the seller to respond.

After several hours, the seller responded.

Finally, Hardy got a confirmation on his order, which was to be on Sunday (10 May), but it never arrived even though he waited past 8pm.

1st delivery not made, rescheduled one didn’t arrive either

When he asked about the non-delivery, he got a reply stating that there were difficulties as something had happened to the puffs.

They didn’t elaborate on the difficulties, but offered to switch the delivery to Tuesday, which was yesterday (19 May), instead.

Hardy said that was fine. But when the delivery didn’t appear for a 2nd time, he had to ask for a refund.

Unfortunately, they’d missed his order, and while thanking him for his patience, they agreed to the refund. 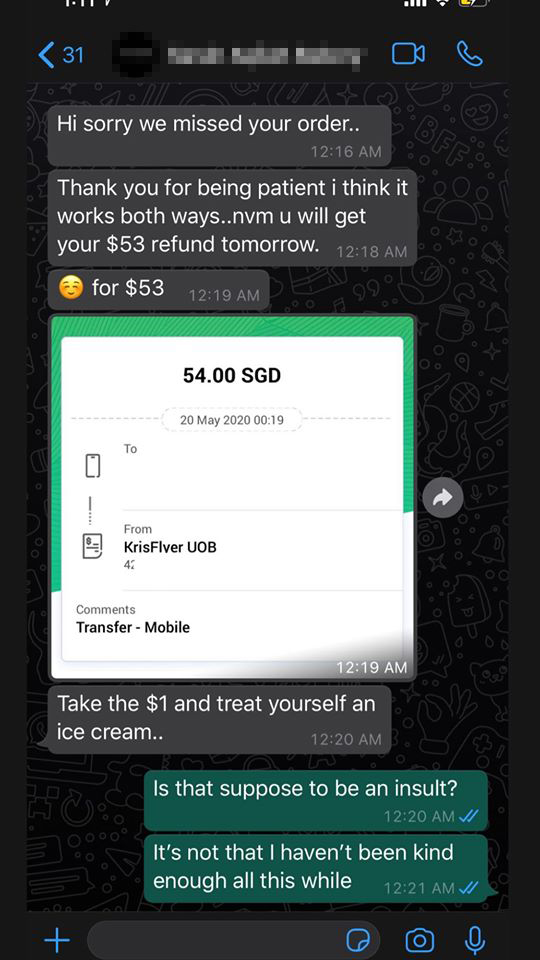 We have to note at this point that the one messaging probably wasn’t being malicious. Perhaps they thought an extra tip on a refund was part of customer service.

Also, texts can sound a lot worse than a face-to-face or phone conversation as it can be hard to detect context.

When Hardy asked if the $1 was supposed to be an insult, they said it was complimentary for missing out on his order. 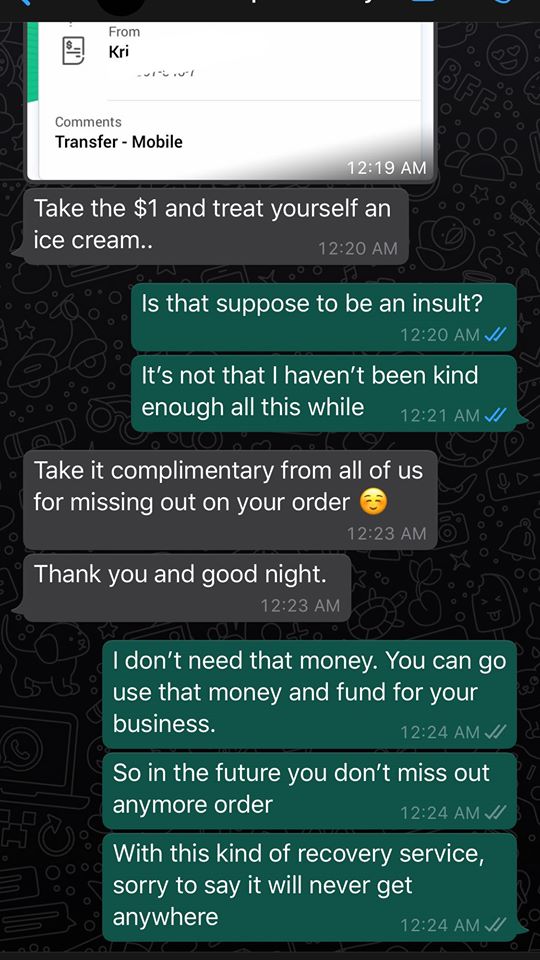 However, he wasn’t impressed. Instead, he returned the $1, commenting that “even the Apek Ice Cream” costs $1.20 these days.

Nobody would be very happy if they made an order, only to have it not arrive twice. And perhaps there was a high volume of orders.

Hardy says in the post that perhaps the seller should not have over-promised on orders in that case.

Others noted that the seller need only have apologised and made the refund, instead of adding the remark about ice cream. 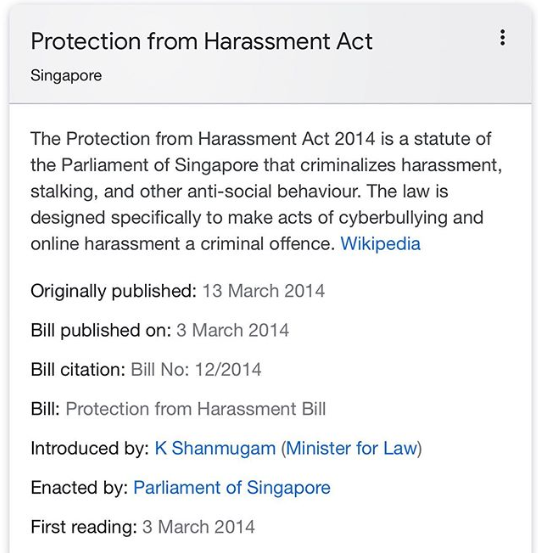 But hey, at least the refund went through. We wish both customer and seller well, and hopefully we can all learn from this experience. 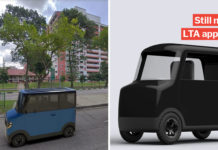