The General Elections are all but announced, with the PAP firing a salvo towards opposition party Workers’ Party last Friday (19 Jun).

For those not in the know, Dr Tan, who is an MP of Jurong GRC, had questioned Mr Alfian being branded as a ‘loving critic’ of Singapore.

You can read all about it here.

Saying that Dr Tan had addressed a “legitimate” question to Mr Singh, Mr Shanmugam reiterated the points that were made regarding Mr Alfian. 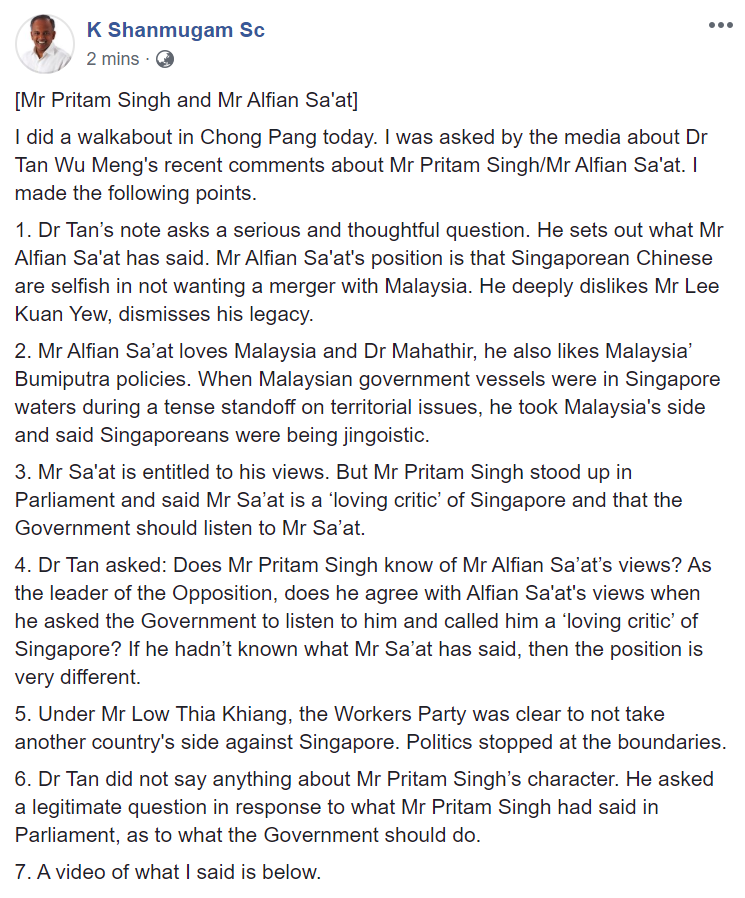 Meanwhile, Mr Singh clarified the questions asked of him on Facebook soon after.

Read on to find out about what both of them said.

Shanmugam clarifies Alfian Sa’at is entitled to his views

Following media requests to weigh in on the issue, Shanmugam defended his fellow PAP member, saying that the MP had asked a legitimate question. 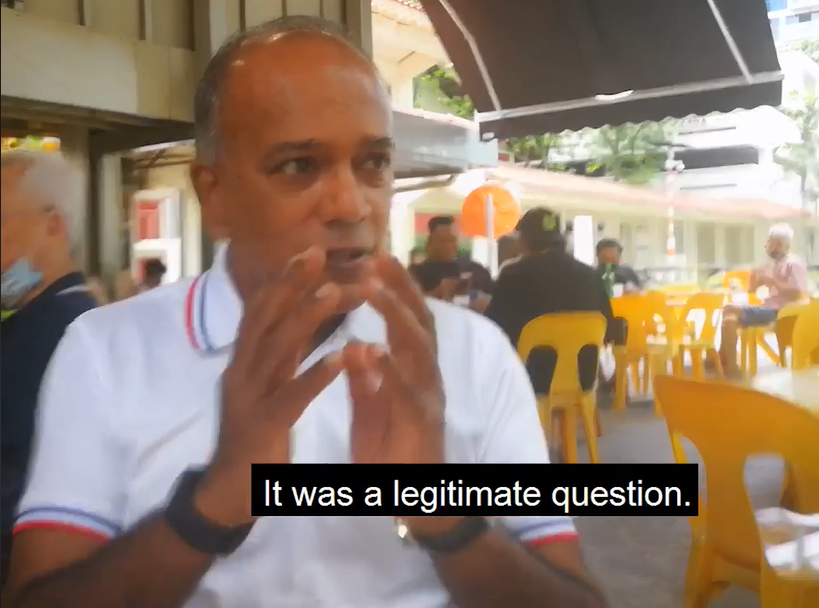 Though Mr Shanmugan clarifies that Mr Alfian is entitled to his opinions, these opinions he apparently holds should call into question whether he is in fact a ‘loving critic’ of Singapore.

Shanmugam feels line must be drawn when another country involved

Mr Shanmugam also clarified that the WP’s stance may be different from the PAP’s, but when another country is involved, that’s where he feels a line must be drawn.

As far as he is concerned, the WP or Mr Singh should never take another country’s side against Singapore.

He also claims that there was no questioning of Pritam Singh or his character made by Dr Tan:

…All that Dr Tan did was to set out the post that Alfian said, and then ask, did you know about this when you supported him in Parliament?

Regardless, Mr Singh appears to stand by his choice of words in describing Mr Alfian.

In a Facebook post replying to Mr Shanmugam’s comments, he defends his usage of the term ‘loving critic’, which he says was coined by Professor Tommy Koh.

Mr Singh says that he’s always appreciated theatre practitioners in Singapore, such as Alfian Sa’at, due to their critical and provocative reflections — which he says give rise to a thinking population.

He further defends Mr Alfian and won’t stand for him being under scrutiny in Parliament for selective reading of his works. However, he and the WP won’t stand for any conduct that involves another country and that works against Singapore

He also states that WP stands with Singapore, and that “there can be no doubt where” they stand in this regard, citing their stance when in late 2018 a Malaysian vessel entered Singapore waters.

Lastly, Mr Singh addresses how Dr Tan’s act has caused some to attack him and the PAP. This is where he doesn’t mince his words, calling his accusations a leap in logic.

The “belated but calculated decision” to post his views on the PAP website also makes him, and some Singaporeans, believe that the questions posed were politically motivated to turn voters against the WP.

However, he stops short of decrying their actions, as Mr Singh says “the public are… entitled to respond (to PAP’s tactics)… at the ballot box”.

Of course, the decision to make an opinion piece, on the PAP website no less, carries implications beyond asking mere questions about someone an opposition party member supports.

Both Dr Tan and Mr Shanmugam made comments about WP ex-leader Low Thia Khiang and long-time Parliament mainstay — the former calling him a “patriot” while the latter said he never took another country’s side against Singapore.

Does Pritam Singh knows what’s at stake when calling Alfian a ‘loving critic’? That, perhaps, is the real question the PAP wants to ask him. And he’s certainly responded by not only sticking to his guns in his word choice, but also rejecting any stance that would paint him as a national traitor.

And with that, we can truly say that the election is nearly upon us.