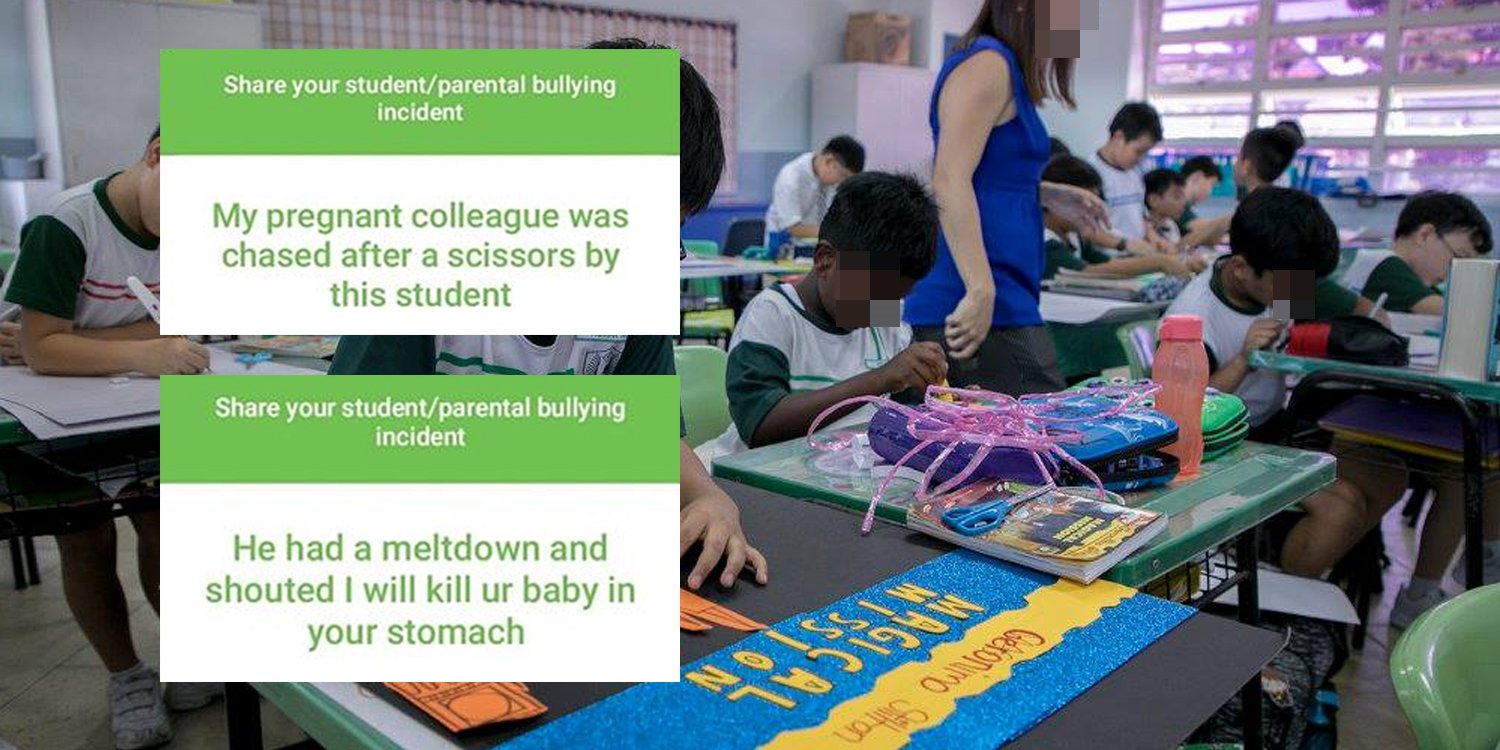 Shocking tales of teachers getting bullied.

Being a teacher can be quite a thankless job.

They have to deal with rebellious students, and in some instances, ‘helicopter’ parents who are overly protective over their children.

Cak Cak Kuti, an education centre in Singapore recently conducted a poll on their Instagram page, asking teachers to share their experiences of getting bullied.

They subsequently posted some of these responses on their Facebook page. 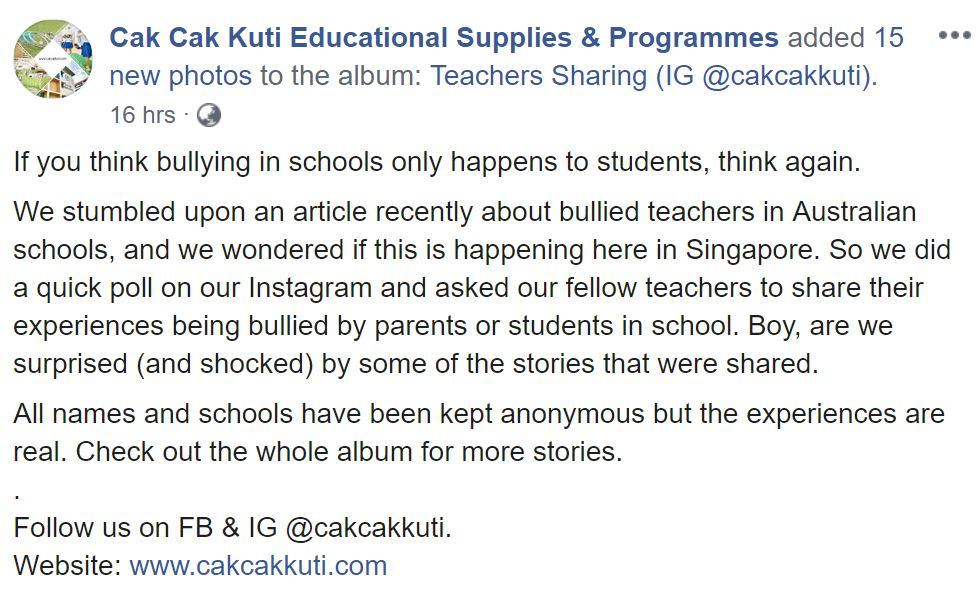 Here are some of the shocking responses that they received.

Made a police report & complained to MOE

This student allegedly gave a false statement to the police about his teacher throwing a chair. Another student’s grandma allegedly gave borderline racist remarks, saying that this teacher will be more well-liked if she removed her headscarf, presumably a hijab. As if that wasn’t enough, that same grandma later rolled her eyes when the teacher greeted her and proceed to talk to another Chinese teacher instead. 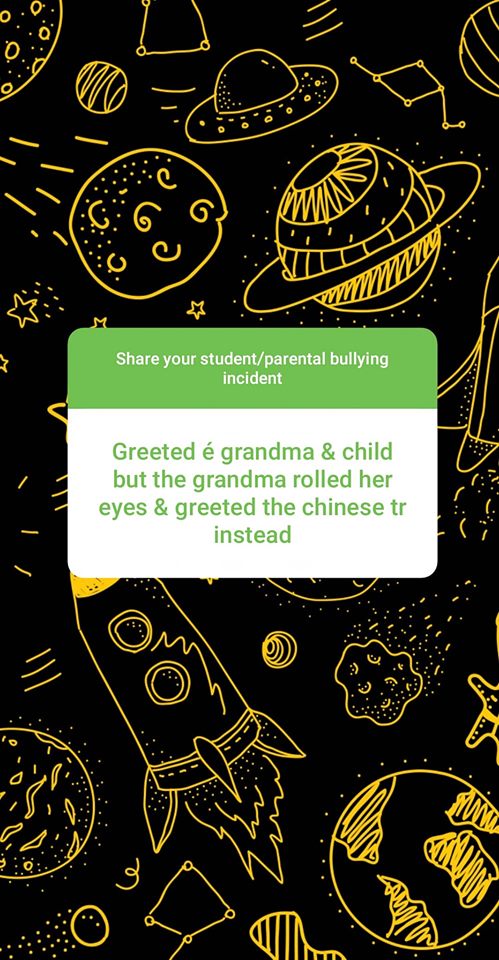 Just trying to do their jobs

This teacher apparently chased one of her disruptive students out to ensure that her class remained conducive for learning but later found herself having to deal with that student’s lies later. 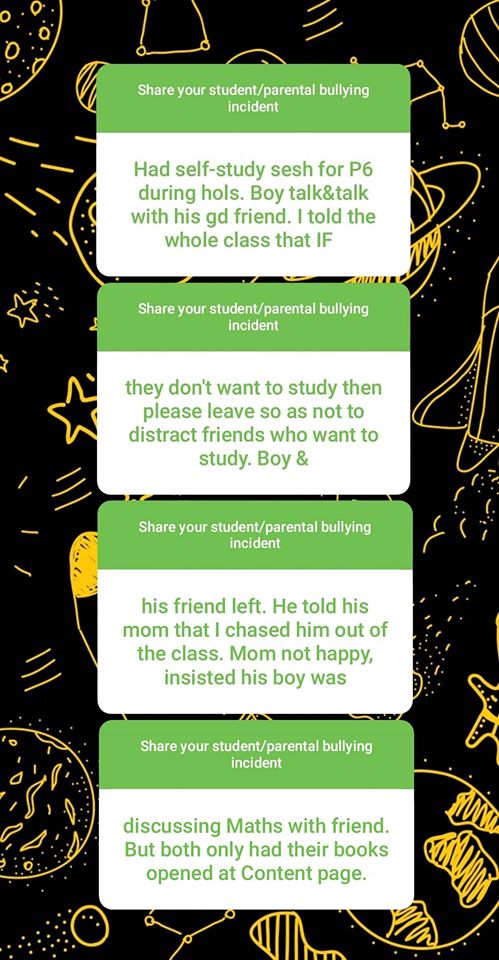 Some parents found it hard to believe that their child’s answered their test questions wrongly, and demanded to see the answer key for themselves. 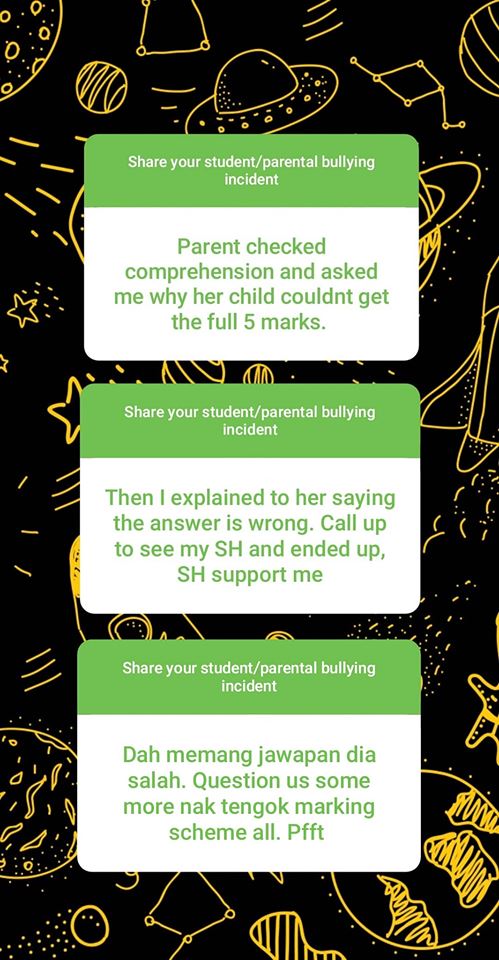 This school’s principal and vice-principal apparently took sides with a student who pointed the middle finger at a teacher. In another instance, a school apparently took sides with a student who physically abused his teacher. 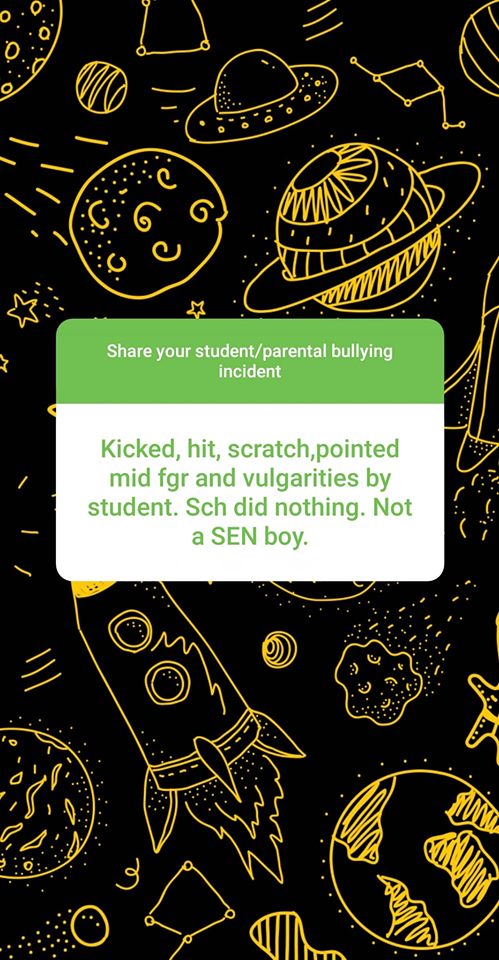 This pre-school teacher claims that she was often subjected to verbal abuse from parents, and even had to deal with fake allegations that their child was abused in class. 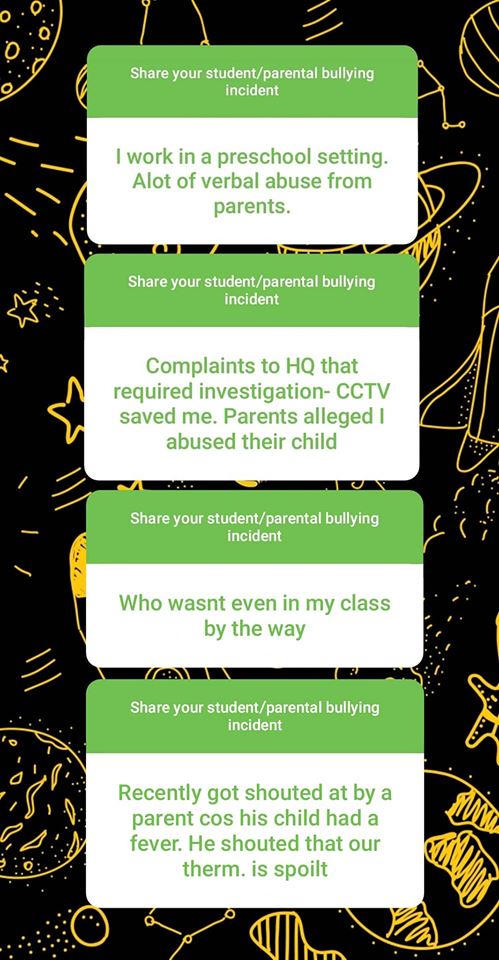 “You’re just a teacher, what do you know” 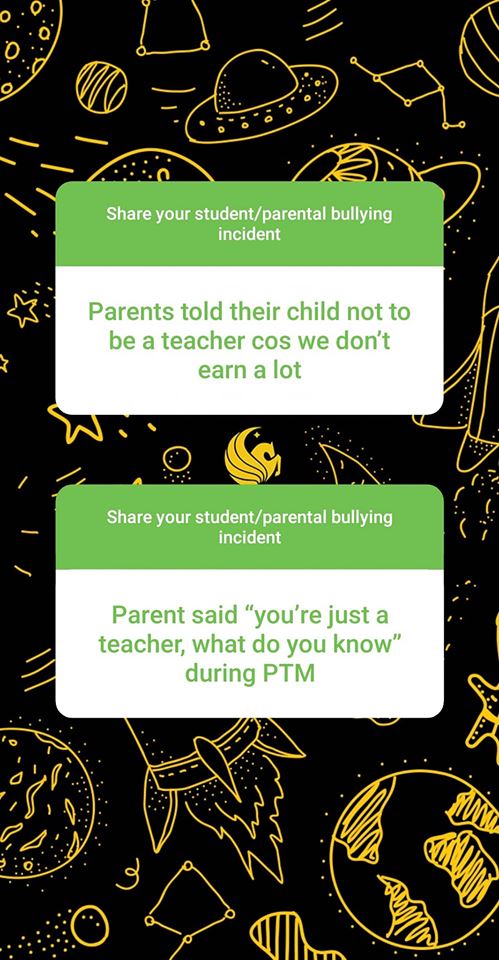 And then there are other parents who tried to intimidate the school by sending emails using their government work accounts. 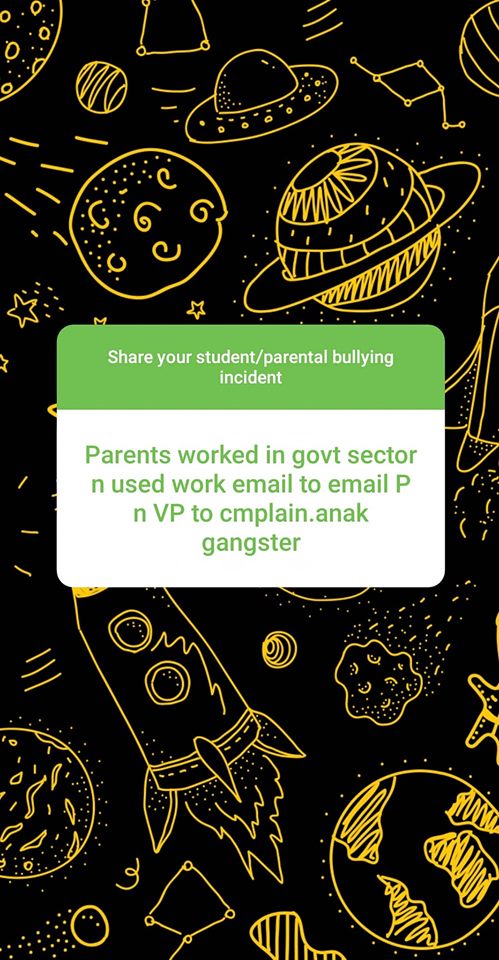 If you thought that the Red Wedding scene from Game of Thrones was a painful watch, this incident is guaranteed to leave you shook.

One teacher claimed that her pregnant colleague was chased by a student who wanted to kill her baby with a pair of scissors. 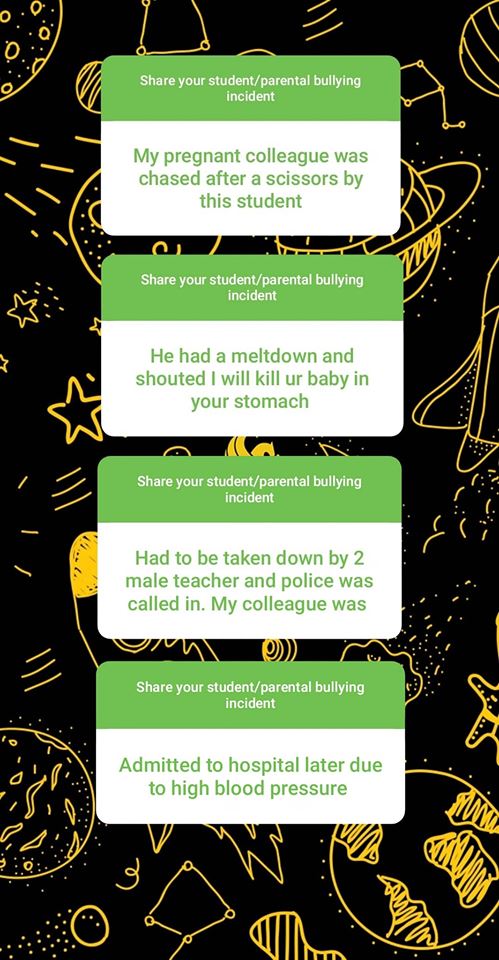 Even though the student was later restrained, the pregnant teacher was brought to a hospital due to high blood pressure.

Thank you for your patience

These experiences shared by teachers have apparently left many netizens triggered. 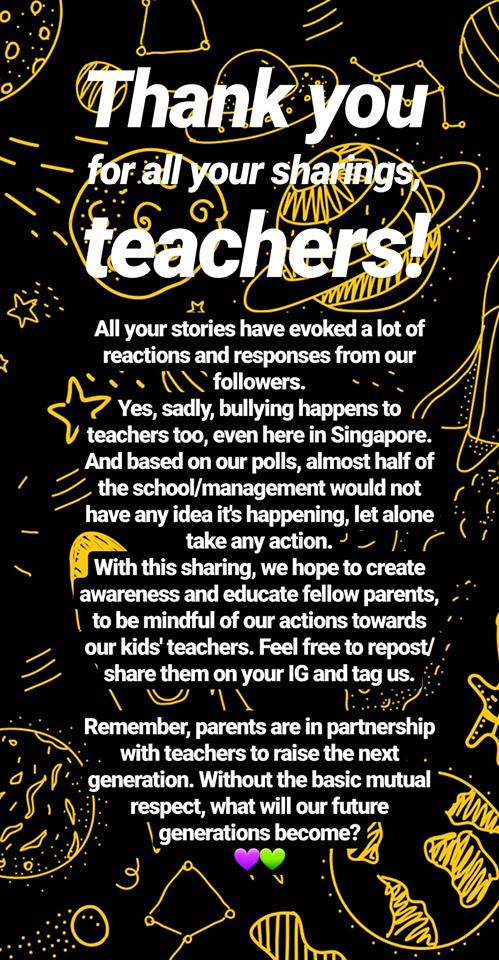 Teachers, like members of all other professions, deserve to be treated with respect and dignity.

We hope this will help create awareness of the tough environments that teachers are working in today, and will lead to effective changes down the road.