Smoker Fined $200 Outside Bugis Junction Accuses NEA Of Being Unfair Singapore is a fine city indeed.

NEA Claimed He Was Smoking Inside Shopping Centre

Singapore is renowned for being a fine city, where the slightest misdemeanour can result in a hefty monetary penalty.

Most recently, a netizen by the name of Lawrence Chee was fined $200 for having a puff at an area where smoking was allegedly allowed.

Feeling angered, Mr Chee took to Facebook to air his frustrations. The post has since gone viral and has close to 1,000 shares at the point of this article. Last Saturday (24 Nov), Mr Chee was having a puff outside Bugis Junction when he was issued a $200 fine by a National Environmental Agency (NEA) officer. 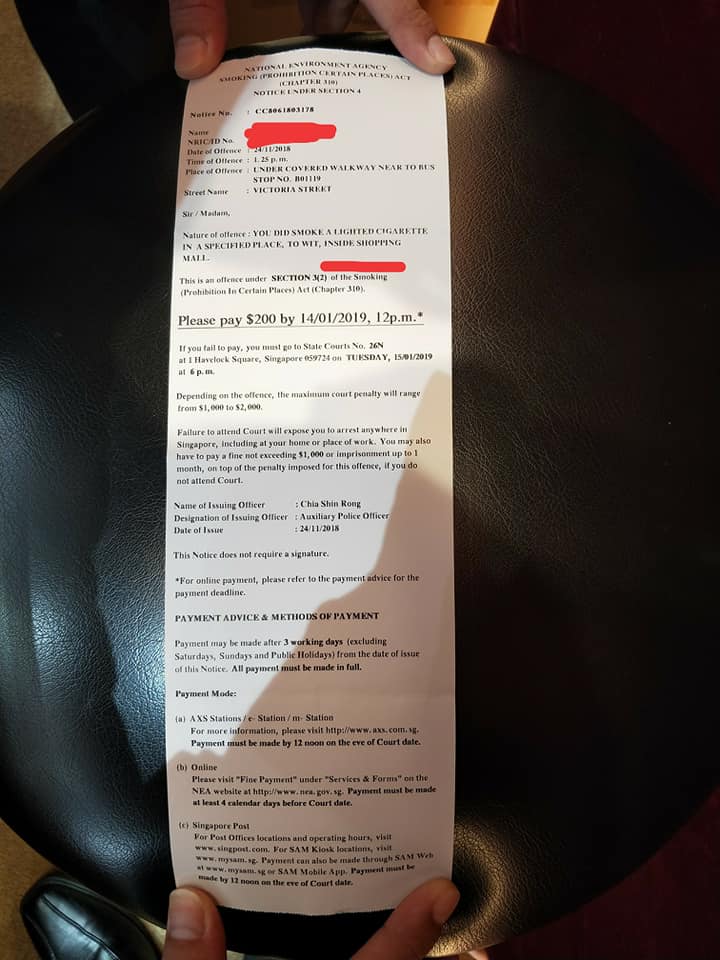 Mr Chee’s gripe? NEA agents had previously told him that smoking was allowed in the area.

Furthermore, he claimed that there were some discrepancy with the location of the offence.

On the fine slip, it was written that the offence took place under covered walkway under the “place of offence”, but in a shopping centre under “nature of offence”.

Other smokers around not fined

Mr Chee felt that the NEA officers were being unfair with their actions, and accused NEA officers of “anyhow summoning people” to hit their “daily targets”.

He alleges that he was the only person fined, even though there were other having a puff at the area.

It’s important to note that both points raised are contradictory, for if the officers truly wished to ‘hit their targets’, they would logically fine everyone in the vicinity.

At the end of the day, let’s not forget that this is still a one-sided account, and should be taken with a pinch of salt.

MS News has reached out to NEA for comments on this incident.

Meanwhile, here’s a list of places where smoking is allowed, so you can have your cigarette and smoke it too without incurring a painful fine.