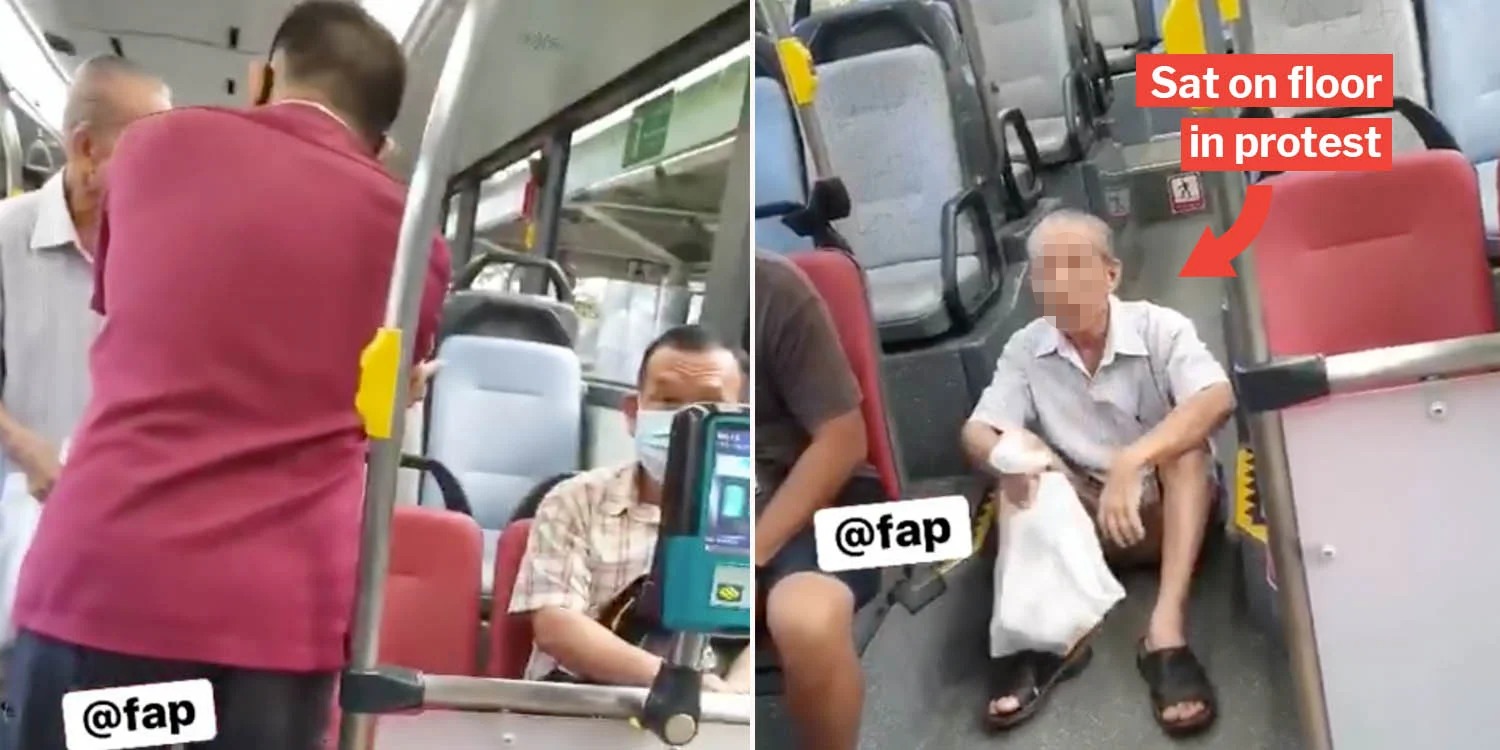 We’re 11 days into the ‘Circuit Breaker’ but many of us – particularly the elderly – are still finding it difficult to adjust to things.

Many of them don’t quite understand why they’re not allowed out, or why they have to wear masks everywhere now. The sudden change is unfamiliar and difficult for them to accept, especially if they’re not the sharpest anymore.

Yesterday (16 Apr), a video on Fabrications About the PAP’s (FAP) Facebook page drew the attention of many as it highlighted the elderly’s plight. This uncle was just another elderly person struggling to comprehend the situation, and needed some guidance to do the right thing. 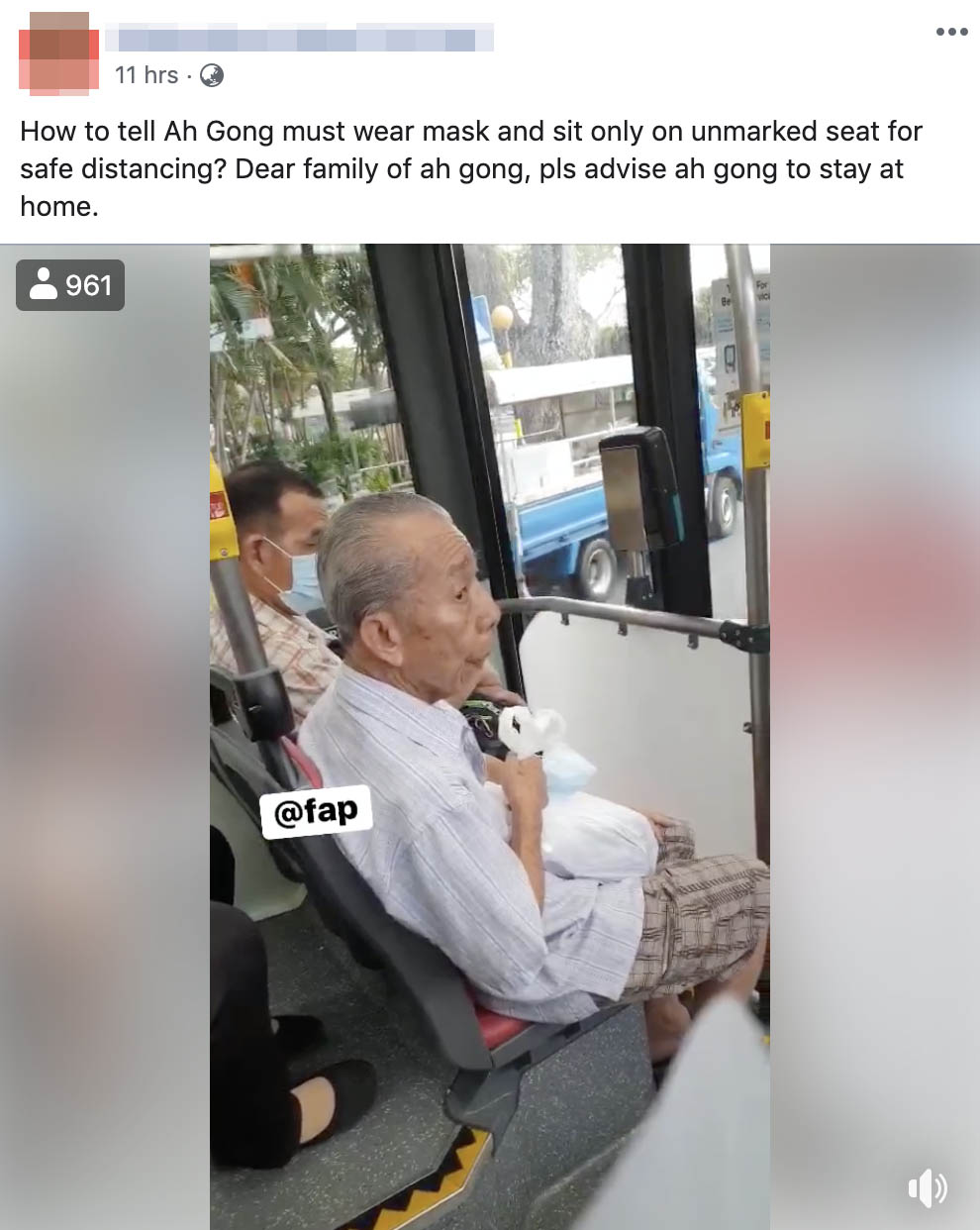 Luckily, this kind SMRT bus driver rose to the occasion, calmly instructing the uncle to sit at an appropriate place.

Elderly uncle sat next to another passenger

The video showed the uncle sitting down next to another passenger on the bus. This isn’t allowed now — passengers are meant to be seated alone as a social distancing measure. 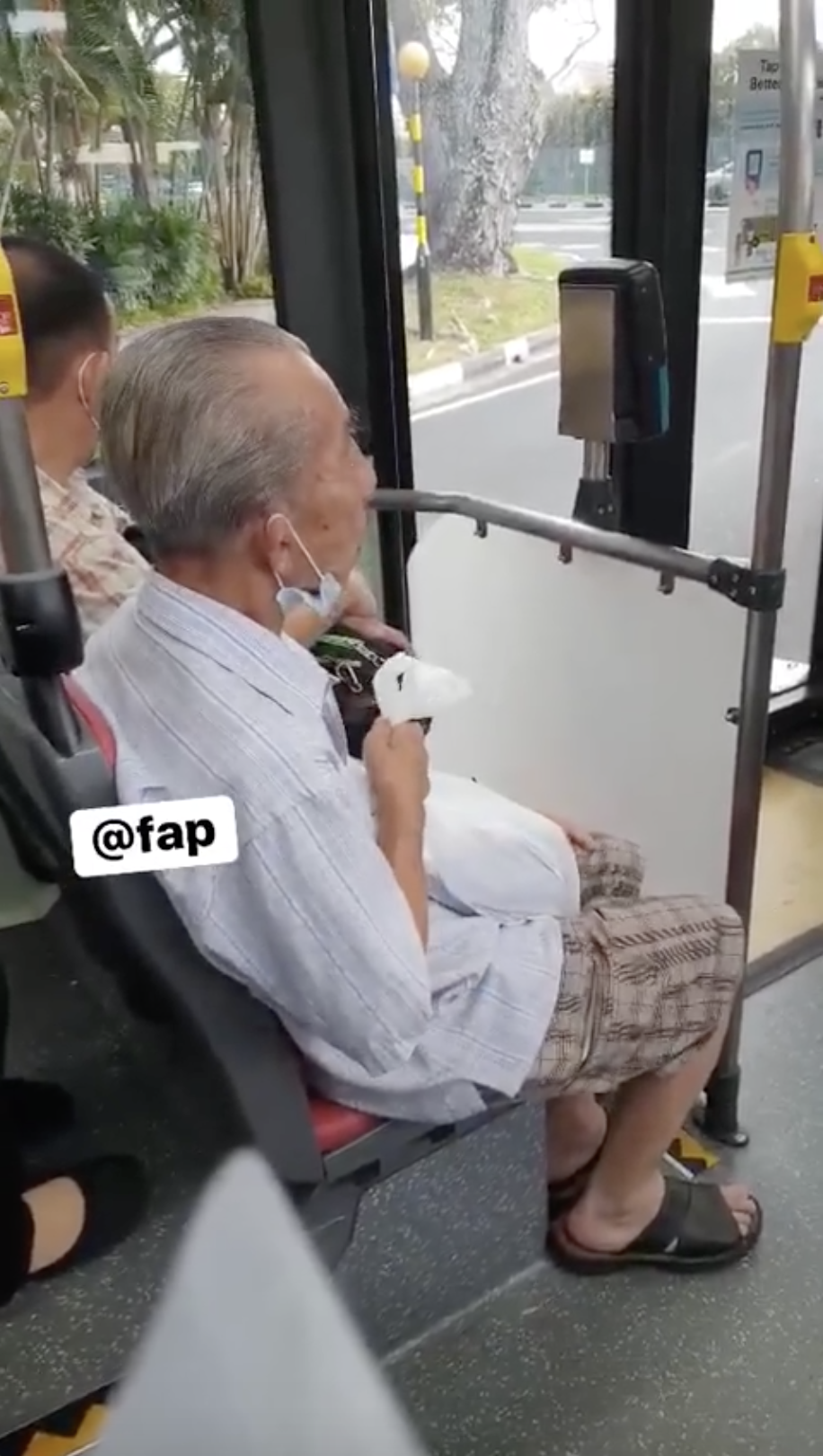 The uncle had taken off his mask too. For the most part, it seemed like he wasn’t familiar with the current regulations with face masks and social distancing.

Soon, the SMRT bus driver left his seat and gently asked the uncle to move seats.

He told him in Mandarin that he couldn’t sit there, and asked that he moved to the seats further behind, but the uncle seemed to take it the wrong way and sat on the floor in protest. 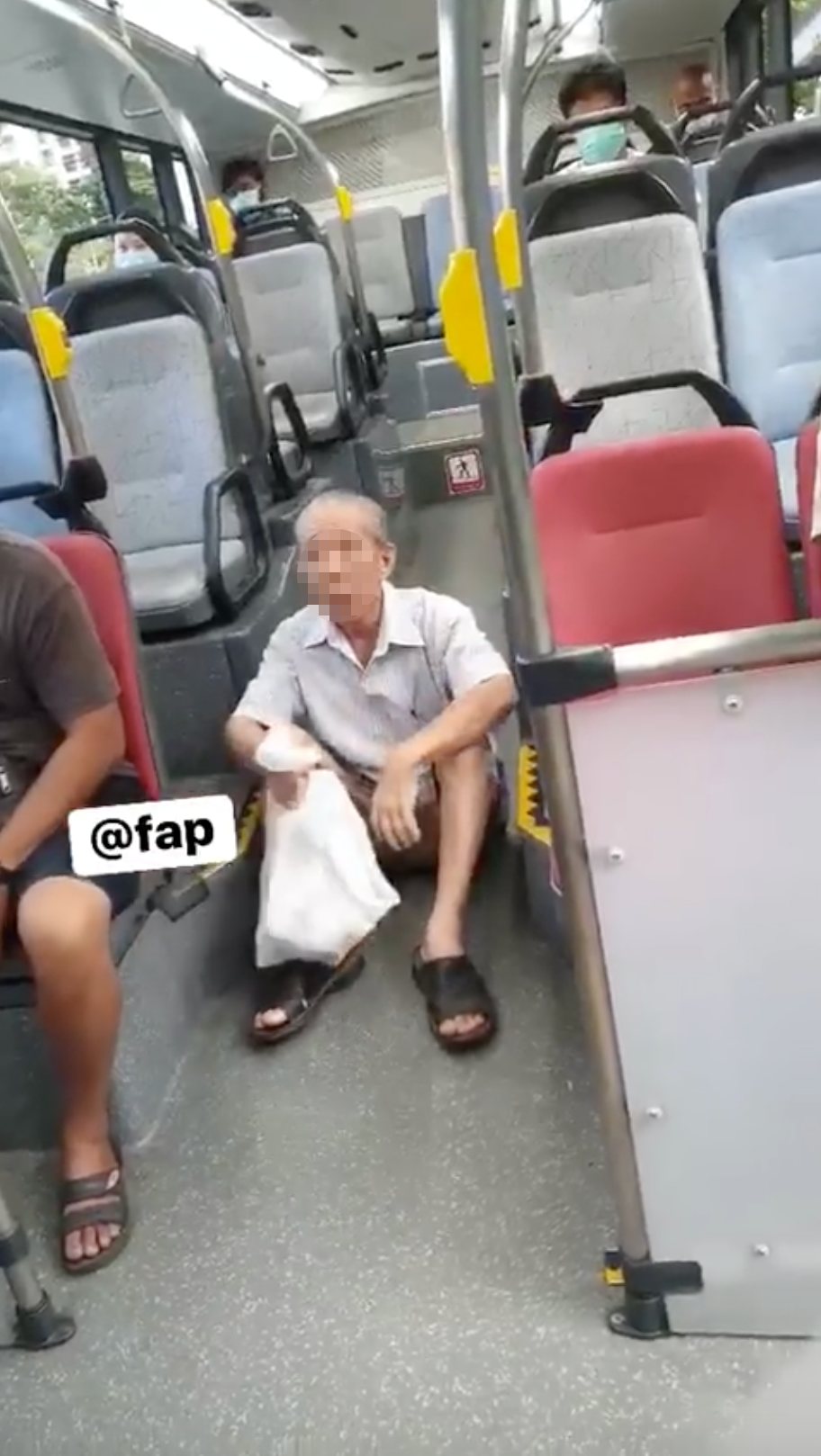 Still, the SMRT bus driver held his composure and coaxed the uncle into sitting down alone. 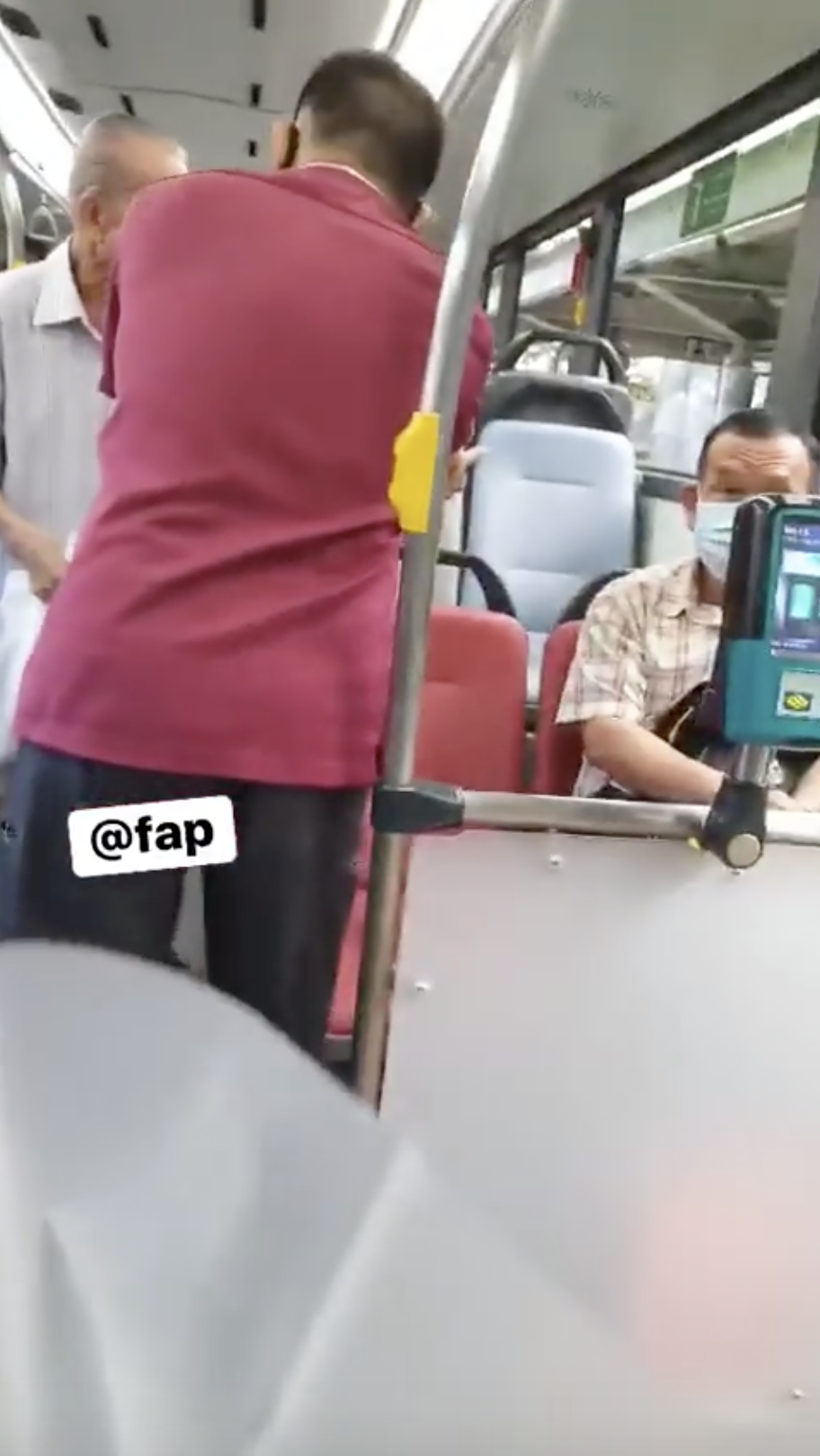 Once the uncle was seated, he folded his face mask and put it in his shirt pocket – another indication that he doesn’t understand the safety rules we need to follow now. 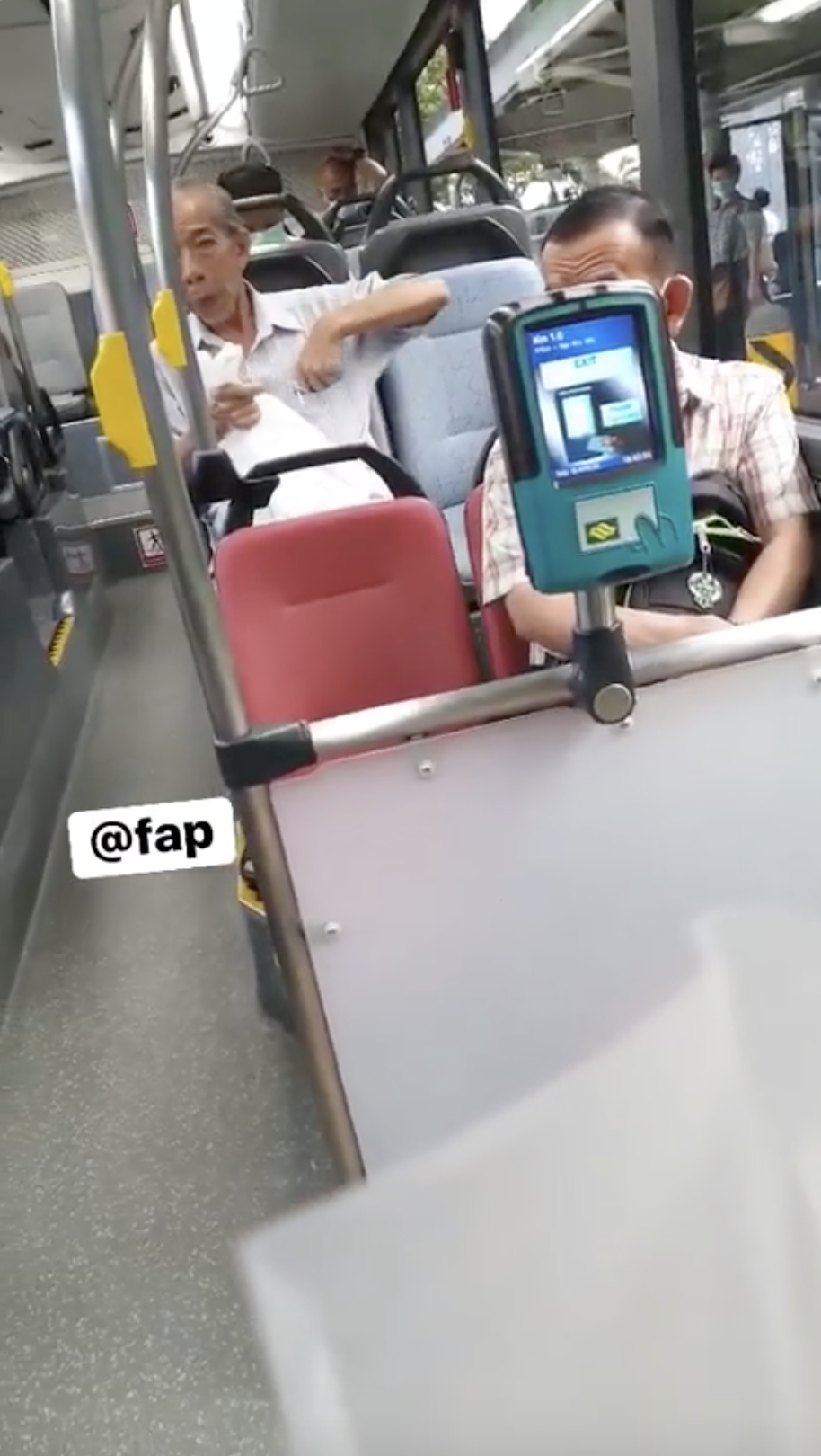 Some netizens noticed his not wearing a mask too, and advised that families keep an eye on the elderly for their safety, during this period.

Others who commented sympathised with him, saying that he struggled to understand the situation due to old age.

A netizen even speculated that he may suffer from dementia, and applauded the bus driver for his patience in dealing with him.

One suspected that he was reluctant to sit on a raised seat, and so kicked up a fuss.

It’s clear that many are struggling with the ‘Circuit Breaker’, whether financially, emotionally, or maybe even physically.

Following the precautionary measures is just one part of fighting the battle against Covid-19 — we need to support each other through these difficult times too.

Whether it’s being calm and explaining the importance of mask-wearing to the elderly, tipping your deliveryman or even lending someone a listening ear, we can all do our part by being a little kinder, just like this SMRT bus driver.

Be patient, and be kind, this ‘Circuit Breaker’. Everyone’s struggling as much as the next guy, so let’s try to make it a little better for each other.