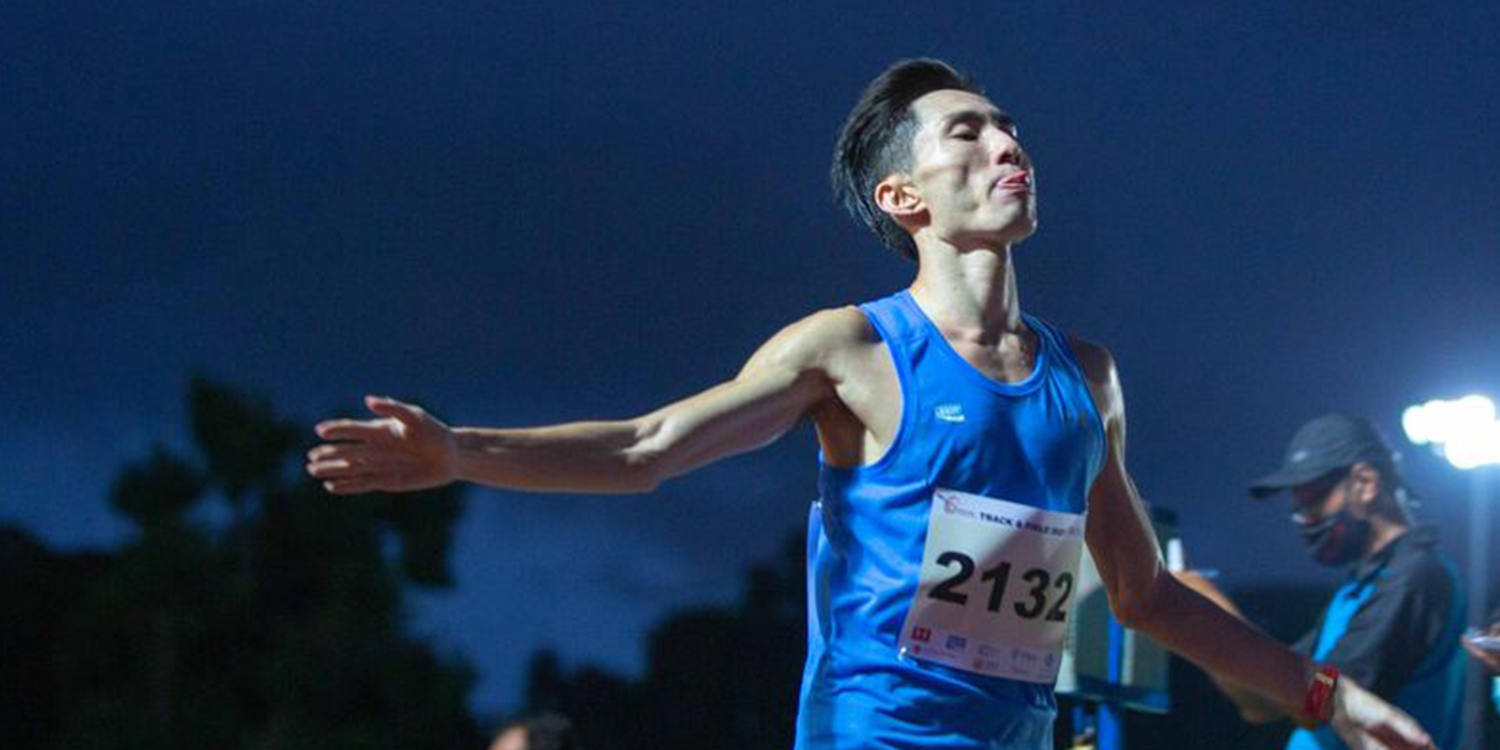 Some claimed that Commandos could hit that timing easily.

Soh Rui Yong Challenges Citizens To Beat His Timing In A 2.4KM Run

Update (5 Oct): Due to the Stabilisation Phase to curb the rise in Covid-19 cases, the 2.4km challenge has been postponed to 13-14 Nov.

After posting on Facebook about his timing of 6 minutes 53.18 seconds during the Pocari Sweat Singapore’s 2.4km run, there were apparently many comments that downplayed Soh’s accomplishment.

Hence, he challenged anyone to run 2.4km in sub-7 minutes for the same competition next month.

He also added that anyone who can achieve the feat will receive $700 and 700 bottles of Pocari Sweat paid for by him.

Soh claims that he’s the first recorded person to get less than 7 minutes for the 2.4km run. 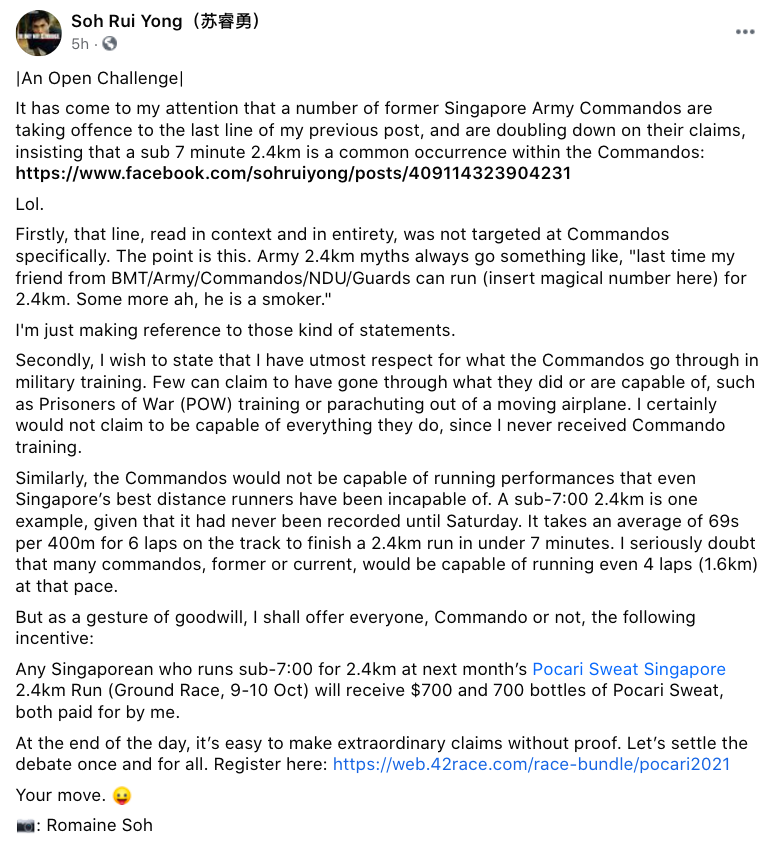 This comes after his previous Facebook post which mentioned how some people might think those from the Singapore Armed Forces or Commando who smokes could run faster than him.

Apparently, several former Commandos took offence to that statement, and Soh clarified that it was not targeted at Commandos specifically.

Additionally, some also downplayed his accomplishment of running 6 minutes 53.18 seconds during the Pocari Sweat Singapore’s 2.4km run. They apparently mentioned a sub 7 minute 2.4km is a common occurrence within the Commandos. 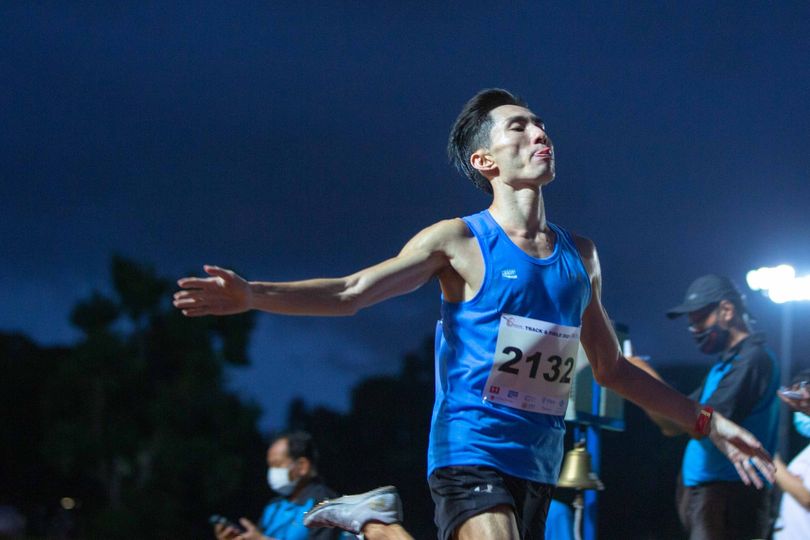 In his most recent post, Soh mentioned he was merely making references to passing statements about how fast people in the army can run.

Soh clarified he has the utmost respect for what Commandos have gone through as their training are especially tough.

However, since a record of sub-7 minutes for a 2.4km run has never been recorded in Singapore until last Saturday (4 Sep), he doubts many Commandos would be able to achieve the feat.

Nonetheless, he has opened a challenge to everyone in Singapore to prove him wrong.

Incentive for whoever can achieve Soh’s challenge

Whoever is able to achieve it at the same Ground Race Pocari Sweat Singapore 2.4km Run next month will receive an incentive. 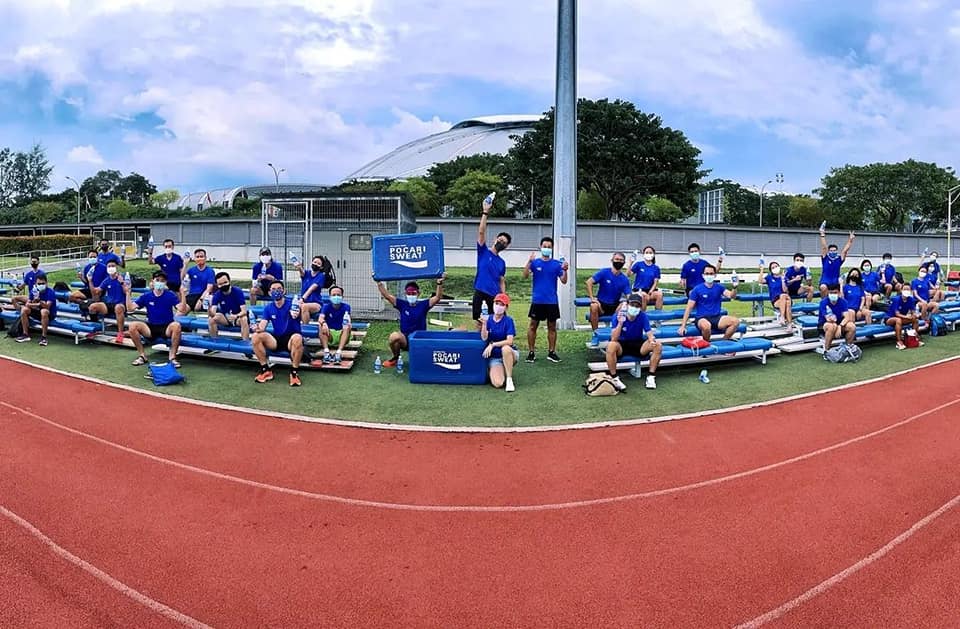 Soh will award $700 and 700 bottles of Pocari Sweat to whoever proves him wrong.

This move by Soh is simply to let people know that making extraordinary claims without proof is always easy. Therefore, an open challenge will be able to settle the debate once and for all.

Soh’s challenge open to all

If you know anyone who might be interested in this challenge, do let them know about it.

Those interested to see if anyone will take up Soh’s challenge can look out for the Pocari Sweat Singapore 2.4km Run next month.

Do you think anyone would be able to prove Soh wrong? Let us know in the comments below.