Thai Cave Rescue: 4 Reasons Why Getting The Boys Out Could Be As Challenging As Finding Them

The world sighed a huge breath of relief as news broke on Tuesday (3 Jul) morning that 12 missing Thai boys, along with their coach, had been found alive.

Members of a local football team, they had ventured into Tham Luang cave 9 days ago. But misfortune struck when the cave’s entrance was blocked off by rain. Handout via The Guardian
Source

A popular tourist attraction, the cave in northern Thailand is prone to flooding from July to November.

Rescuers initially believed that the group’s best hope at survival was to seek refuge at a deep chamber nicknamed Pattaya Beach. But they later found that Pattaya Beach was flooded as well.

Thankfully, rescuers found the trapped team at an elevated area 400 metres away. All 13 were alive, albeit with signs of exhaustion and hunger.

Surprisingly, locating the group is arguably the easiest part of the cave rescue operation, as evacuating them could prove to be an even more challenging task. The Thai military says that the trapped team could be stuck there for months.

Tham Luang cave is one of Thailand’s longest, stretching up to 10km below the Doi Nang Non mountain range. 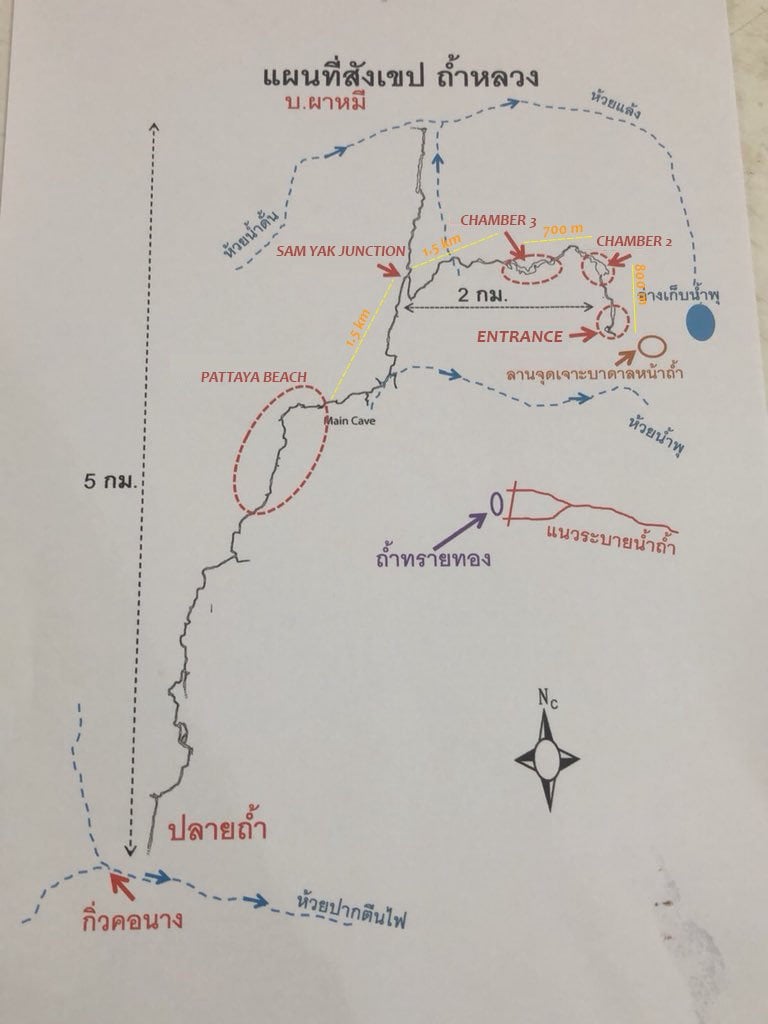 The group is around 4km away from the cave’s entrance. To get to them, rescuers had to swim and dive through a series of flooded tunnels. To get out, the trapped team will have to do the same.

In this vein, the Thai military is allegedly providing them with diving training to ease the evacuating process.

However, having been trapped for 9 days, it goes without saying that the group will not be in an optimal state for learning.

2. Bad weather may just be around the corner

The break in bad weather over the weekend allowed rescuers to locate the trapped individuals. But rain is forecast to return on Wednesday.

This could potentially hinder cave rescue efforts as water levels in the cave might rise again, making it harder to rescue the team.

The sheer darkness of the caves also makes the cave rescue operation tricky. Rescuers were forced to dive in conditions close to pitch darkness.

To make things worse, waters in the caves are extremely murky and have been compared to swimming in a cold cafe latte. The rescued team will also have to spend some time near the cave’s entrance to give their eyes time to adjust to brighter surroundings.

Having been trapped in the cave for such a long time, it shouldn’t come as a surprise that the most of the group is hungry.

In fact, one of the first things that the boys muttered to the rescue divers was for them to bring food.

Surviving without food is painful enough, but imagine having to swim through the meandering tunnels without food for more than a week. That’s on a completely new level.

It has been reported that the group will be supplied with 4 months worth of food, but given how gruelling conditions are in the cave, this might not be as straightforward as it seems. As of this afternoon, energy gel has been delivered to the boys.

Authorities are still figuring out the best course of action. Besides having the group navigate murky waters, another option being considered is to wait for water levels to subside.

If you ask us, swimming in such conditions seems like an extremely risky option. Experts familiar with the subject agree, citing the lack of visibility as a dangerous obstacle.

Even though it will most likely take a longer time, we think that waiting it out is surely the safer option between the two. Either way, its safe to say that the group will not be returning home anytime soon.