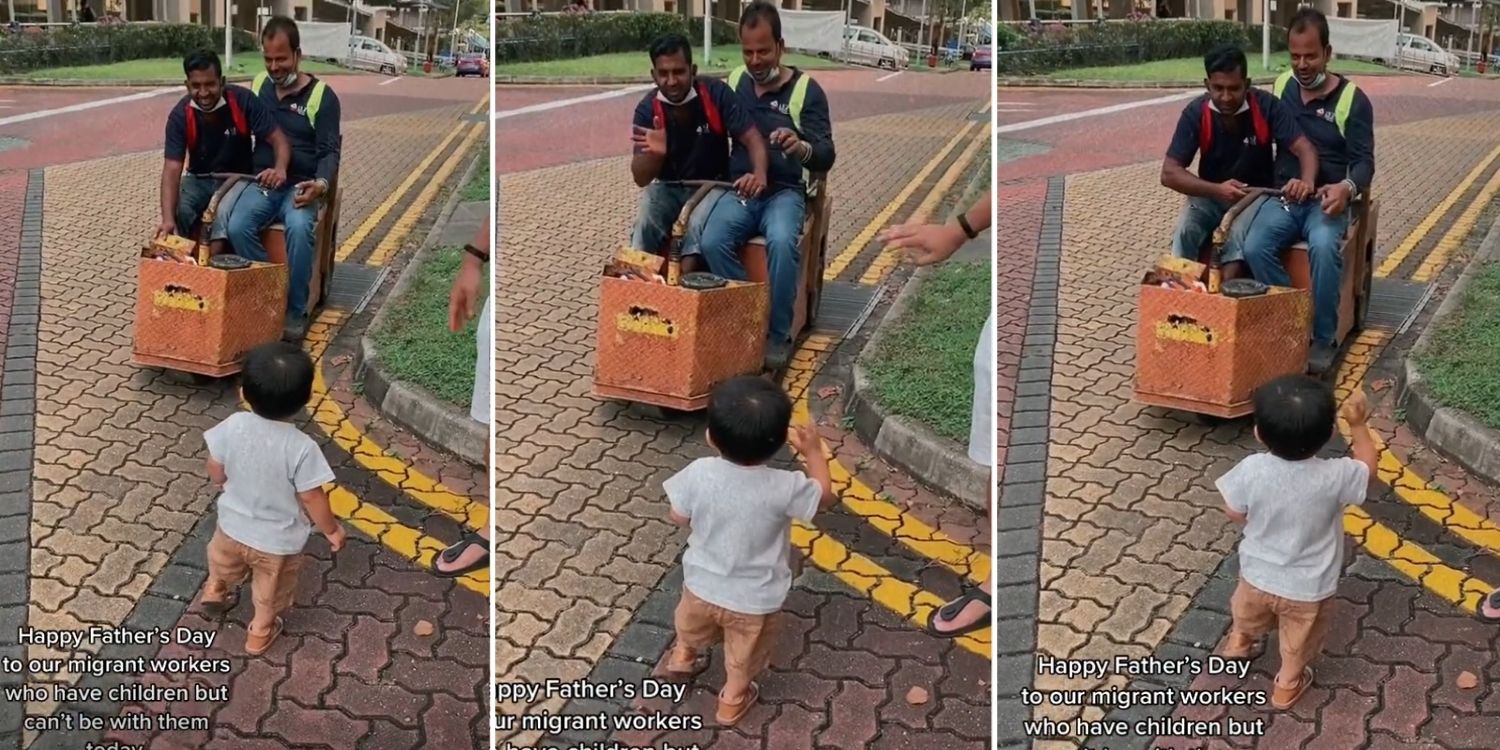 The internet is loving the super sweet and wholesome moment too.

Father’s Day is a time for us to appreciate and celebrate our dads in meaningful ways.

However, not all fathers may be able to spend this joyful occasion with their children. This includes our migrant workers, who left their families behind to come to Singapore and toil hard to earn a living.

This year, however, two migrant workers could still have a sweet and memorable Father’s Day moment thanks to a toddler.

Blowing kisses and waving to his “favourite uncles” at Telok Blangah Heights, the child brought a huge smile to the workers’ faces.

His mother shared a video of their heart-warming interactions, and now netizens can’t stop gushing over it too.

On Sunday (19 Jun), TikTok user @missgoob, aka Wong Jie Hui, shared a video of her son with two migrant workers near their home at Telok Blangah Heights.

Her caption reads, “Happy Father’s Day to our migrant workers who have children but can’t be with them today. May you all stay safe [and] reunite with your family [someday].”

In the clip, she can be heard telling the toddler to say “bye-bye uncles”, and the boy waves cutely at them.

The workers return the gesture, giving him warm looks and smiles as they wave back.

As they start to ride off, the boy proceeds to blow flying kisses at his “favourite uncles”.

This super wholesome scene quickly went viral on the internet. Many praised the mum for teaching her son to treat migrant workers with love and respect.

Others also thanked her for showing kindness to the migrant workers, unlike others who may just ignore them.

And some simply squealed at how adorable the whole thing was.

Apparently, this was not the first time the family has interacted with the workers, who are cleaners at their estate.

Speaking to MS News, Ms Wong shared that she and the workers always say hi whenever they see each other. They would often be driving around the area when she goes out for walks with her dog and son.

The home baker also gifts them with cookies and pastries whenever she has extra.

Ms Wong then explained that her son, who is 16 months old, loves to say hi and wave at everyone he meets. He would also give them his “signature flying kiss”.

She said it was something that she taught him to do to her husband whenever he leaves for work, or to her when the helper brings him downstairs to play with his friends.

“He loves doing it to everyone, but since we can’t have him kissing strangers on the lips, we taught him to blow kisses instead,” Ms Wong said.

She added that she hopes to raise her son to be thankful for migrant workers by explaining how important they are.

“For example, I would show him a dustbin and say, ‘We throw rubbish in here every day. Uncle will help us to clear it and keep the place clean so you can play safely.’ So he knows ‘uncle help’ and that he has to be nice and friendly towards them.”

Many migrant workers who are parents probably felt a tinge of loneliness seeing children with their dads on Father’s Day while they were miles away from their own families.

However, we’re sure that this toddler’s simple yet sweet gesture must have warmed the hearts of the two workers at Telok Blangah, making them feel appreciated in a foreign country.

May this remind everyone to always treat migrant workers with kindness and inspire other parents to instil such an attitude in their little ones.