The 3 Series appears to retail for as much as $180,000, according to estimates from SG Car Mart. 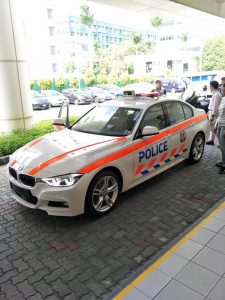 Not the first time BMWs have been used

This isn’t the first time that the TP has used BMW vehicles. The German cars were also deployed in the 1980s and 90s, but were replaced with Volvo S40 Turbos in 1999 and Subaru WRXs in 2005.

The new batch of BMWs are rumored to be diesel-powered, making them the first diesel-powered patrol cars in Singapore. Diesel cars are more economical compared to cars that consume 95-octane patrol, since diesel is about 25% cheaper.

The new BMWs will eventually replace the older batch of patrol vehicles and will be used for official duties from 2019.

We found that there were 7 major reactions to the swanky new rides. Some praised TP for being future-ready, while others warned of a conspiracy linked to falling COE prices.

It’s indeed heartening to see that the netizen behind the most-liked comment took quite a balance stance on the matter.

Then we have those who are concerned about the welfare of our traffic policemen and women.

There are also those who sense that this is all part of an elaborate government conspiracy, mostly related to everybody’s favourite COE.

We all know someone who’s obsessed with the aesthetics of their cars.

And someone’s whose extremely concerned about the environment.

And finally, some who have personal agendas with BMW drivers in general.

Is the brand of our patrol cars that important?

BMW, Volvo or Subaru, we think that the brand of our patrol cars is really irrelevant.

At the end of the day, let’s just hope that these new cars will be put to good use to make our highways a safer place for all motorists.