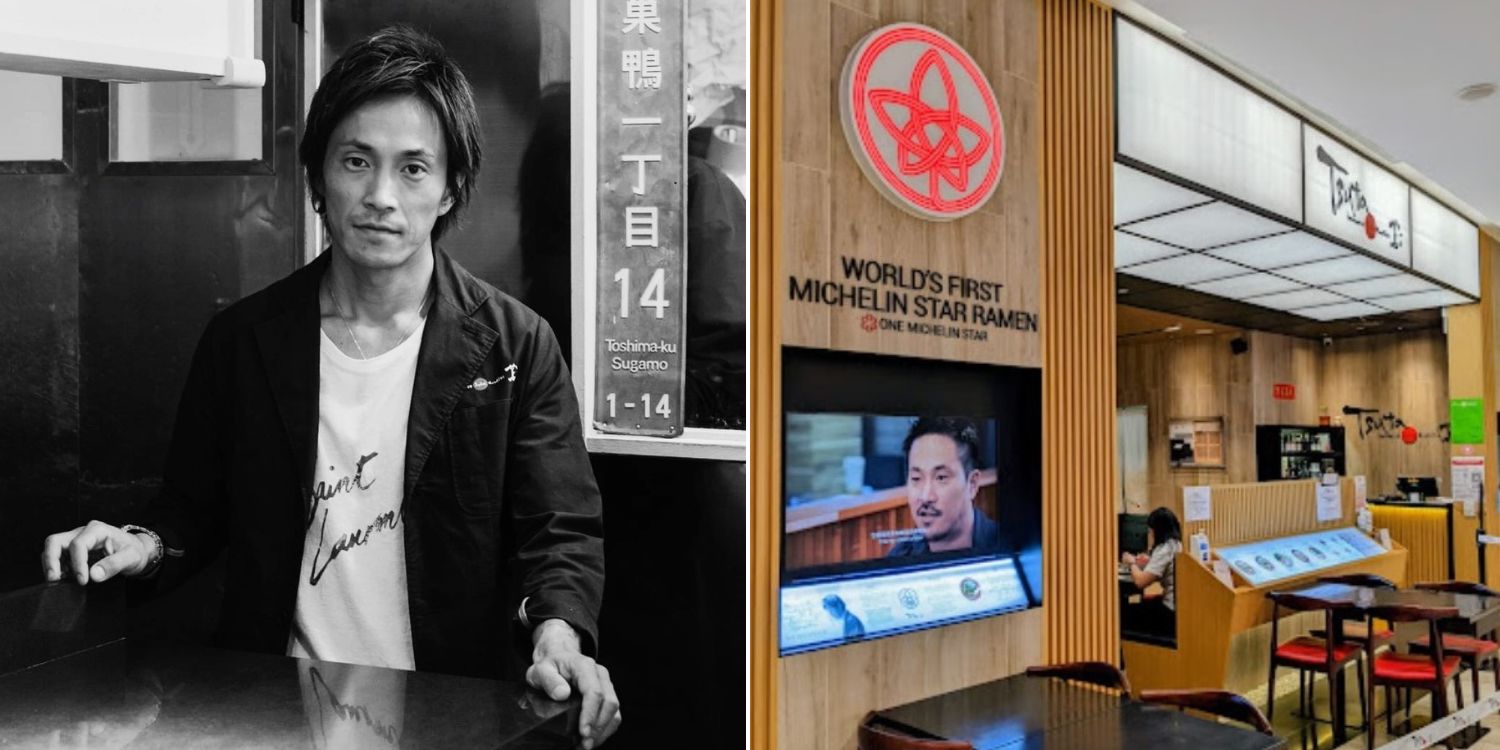 Sadly, the man who originated that famous soup, Tsuta founder Yuki Onishi, passed away at 43. 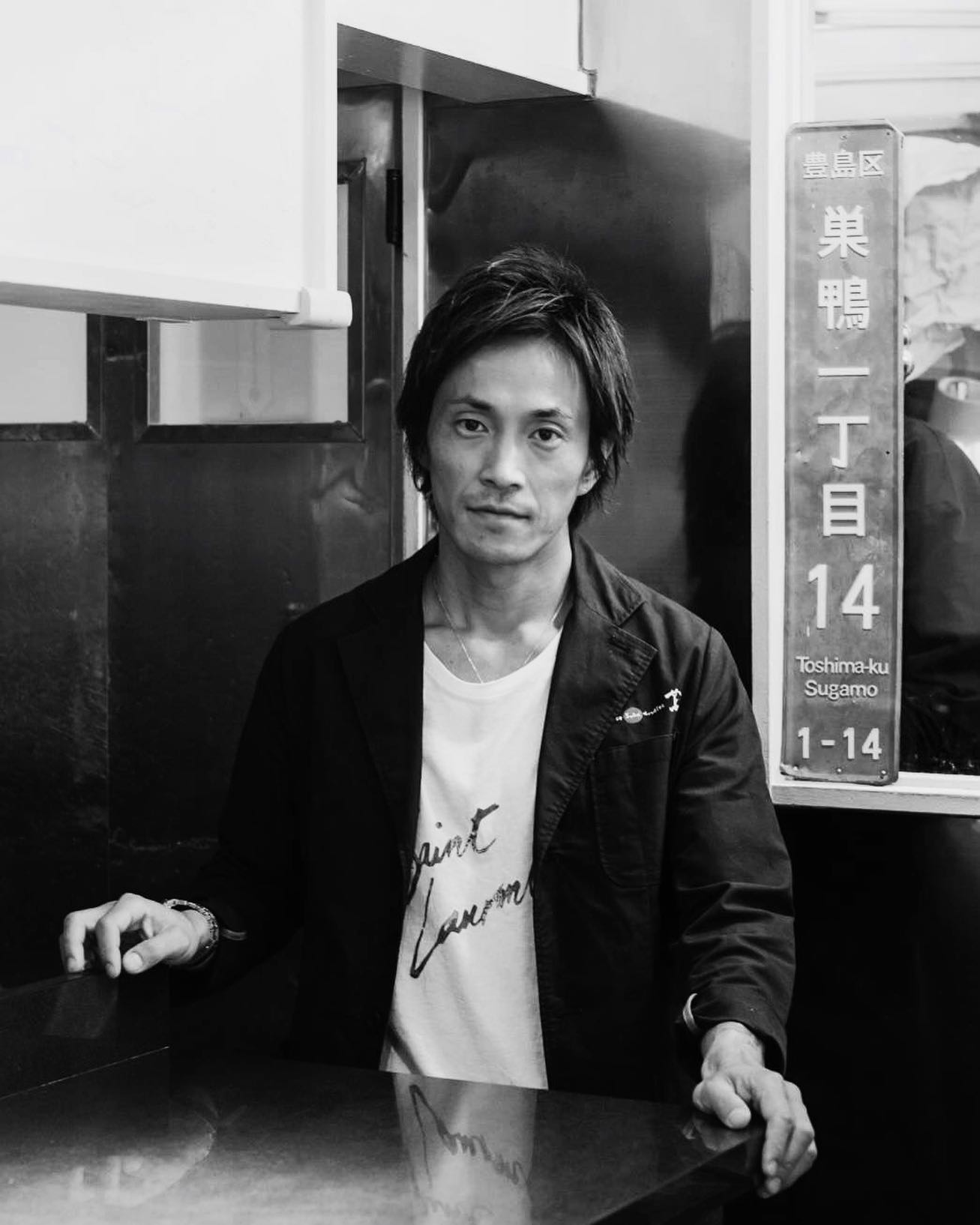 The cause of his death was acute heart failure, reported Japanese news outlets.

Mr Onishi’s passing was revealed by Tsuta on Friday (23 Sep) in an Instagram post in Japanese and English, without mentioning the exact date of his passing.

The ramen chain said they were “deeply saddened”, and described him as a meticulous and talented chef.

They noted that he enhanced the popularity of ramen beyond Japan by founding Tsuta, the world’s first Michelin-starred ramen eatery.

The management vowed to strive to continue his legacy, and sent their thoughts to his family, friends and staff across the world. Brother says funeral will be for family only

Mr Onishi’s elder brother Yoshimi also mentioned his brother on Twitter on Friday (23 Sep), adding that he had passed away “suddenly”. 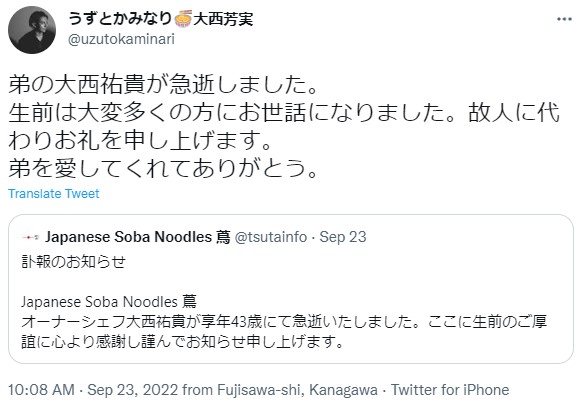 He said his brother was “indebted to many” in his life and thanked everyone on his behalf for loving him.

In a subsequent tweet, Yoshimi, who also runs a ramen shop, said his brother’s funeral would be a family affair with only close relatives present. 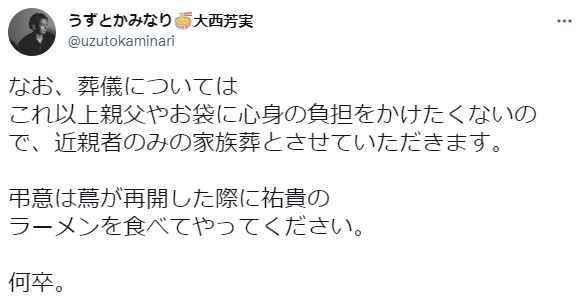 This is so as not to put further physical and mental strain on his parents.

Those who want to pay their respects could eat at Tsuta when they reopen, he suggested.

Tsuta in Tokyo had previously announced in a tweet that they would be closed from Tuesday (20 Sep) due to “various circumstances”.

As 43 is a relatively young age to leave the world, some would wonder what caused Mr Onishi’s sad passing.

Japanese media outlets like Oricon News gave the cause of death as acute heart failure, without elaboration.

Oricon also interviewed a Tsuta staff member, who denied other news reports that he was bitten by a cat.

That staff member described such reports as “absolutely unfounded”.

Mr Onishi founded Japanese Soba Noodles Tsuta – the formal name for the business – in 2012, with himself as chef. 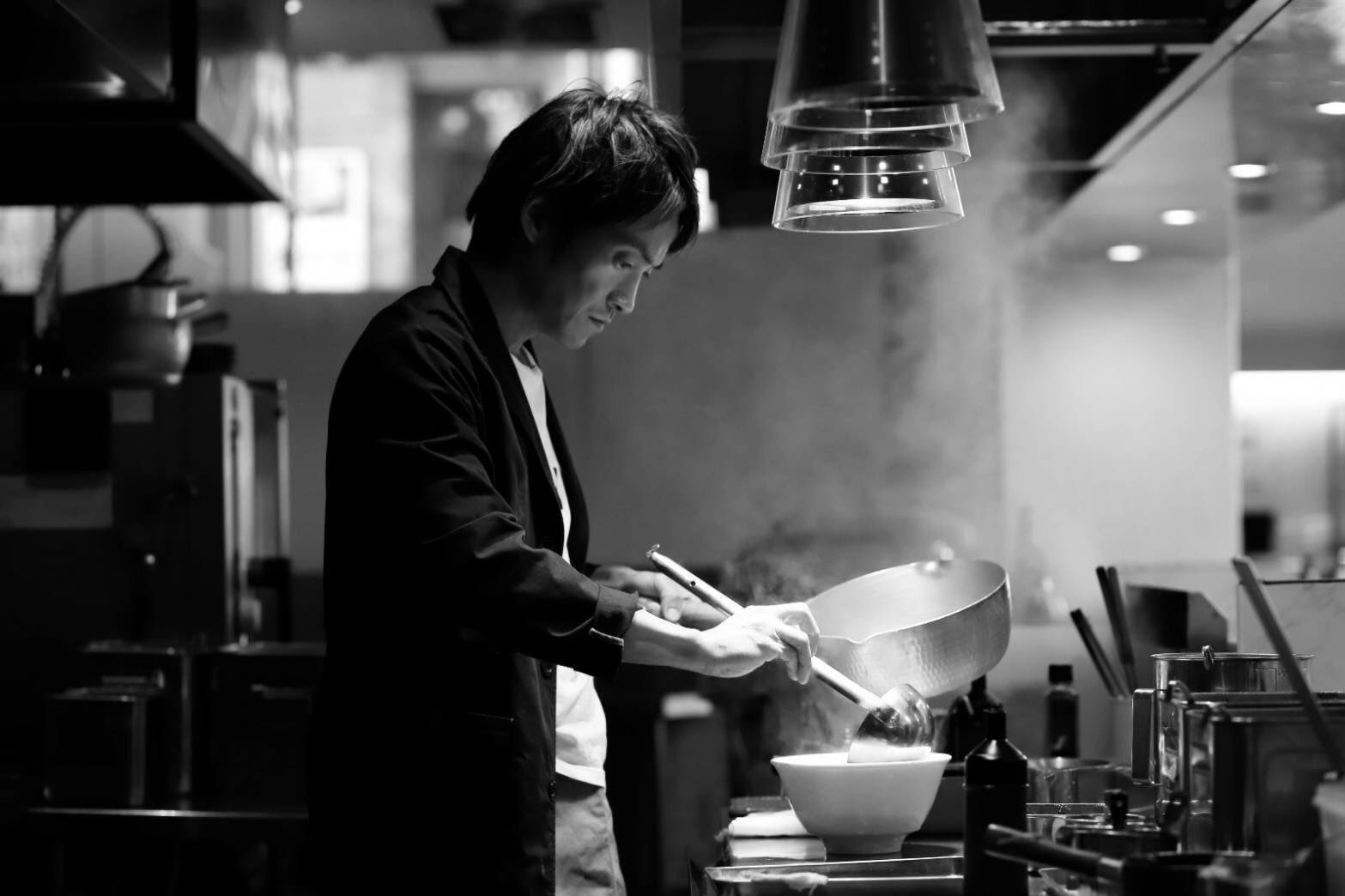 According to the Michelin Guide, its first eatery had just nine seats and was located in Tokyo’s sleepy Sugamo district.

Tsuta was listed in the 2015 Michelin Bib Gourmand list within a few years.

The following year, it was awarded one Michelin star — the first ramen eatery in the world to get that distinction. It was also the world’s only Michelin-starred ramen eatery at the time.

In Nov 2016, Singapore had the honour of having Tsuta’s first overseas outlet, which was located in Pacific Plaza. 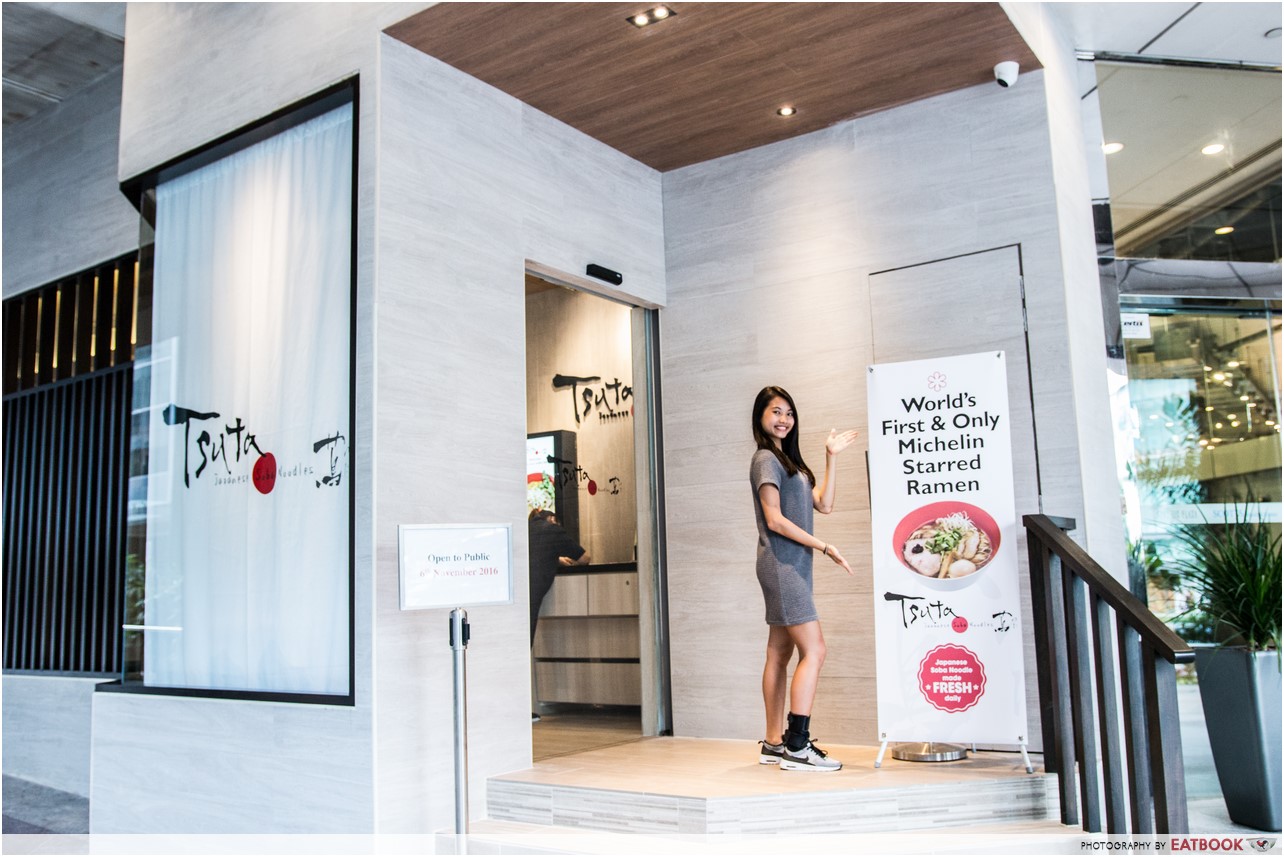 Mr Onishi told the Michelin Guide that his Singapore partner had sent him a message on Facebook.

He agreed to the collaboration because the partner actually visited his eatery in Tokyo, queued up, and ate his food.

Others who were interested didn’t do that, he said.

Though both these locations have since shut, Tsuta currently has three outlets in Jewel Changi Airport, 313@Somerset and Takashimaya Shopping Centre. 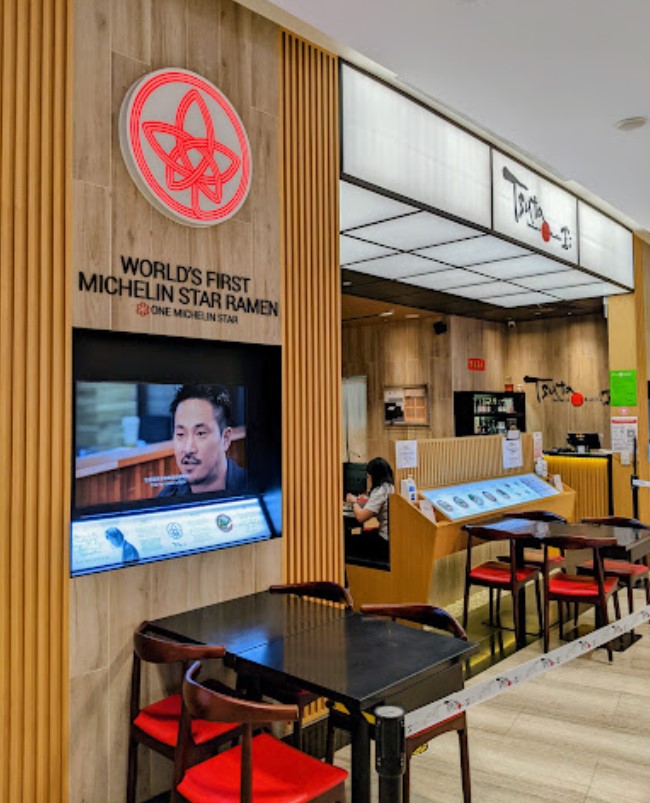 Considering Mr Onishi raised the profile of ramen from low-cost, basic fare to an innovative, premium dish, it’s no wonder he’s been lauded as a culinary great.

Thus, his passing has definitely come too soon, as he could’ve had many more years of perfecting new ramen dishes.

MS News sends our deepest condolences to his loved ones. May his legacy live on in the delight his food brings to people.

Featured image adapted from @tsutajapanofficial on Instagram and Google Maps.