The restaurant said they would do better in gauging the sensitivity of the community.

Kampong Gelam is a vibrant neighbourhood that remains deeply rooted in history as Singapore’s Muslim quarter.

Hence, it’s important to be respectful of the community’s religious and cultural sensitivities.

Recently, a Turkish restaurant near Sultan Mosque courted controversy after hosting a belly dancer outside the eatery.

One man later took to Facebook to criticise the restaurant for what he deemed disrespectful towards the Muslim community. This drew mixed reactions. 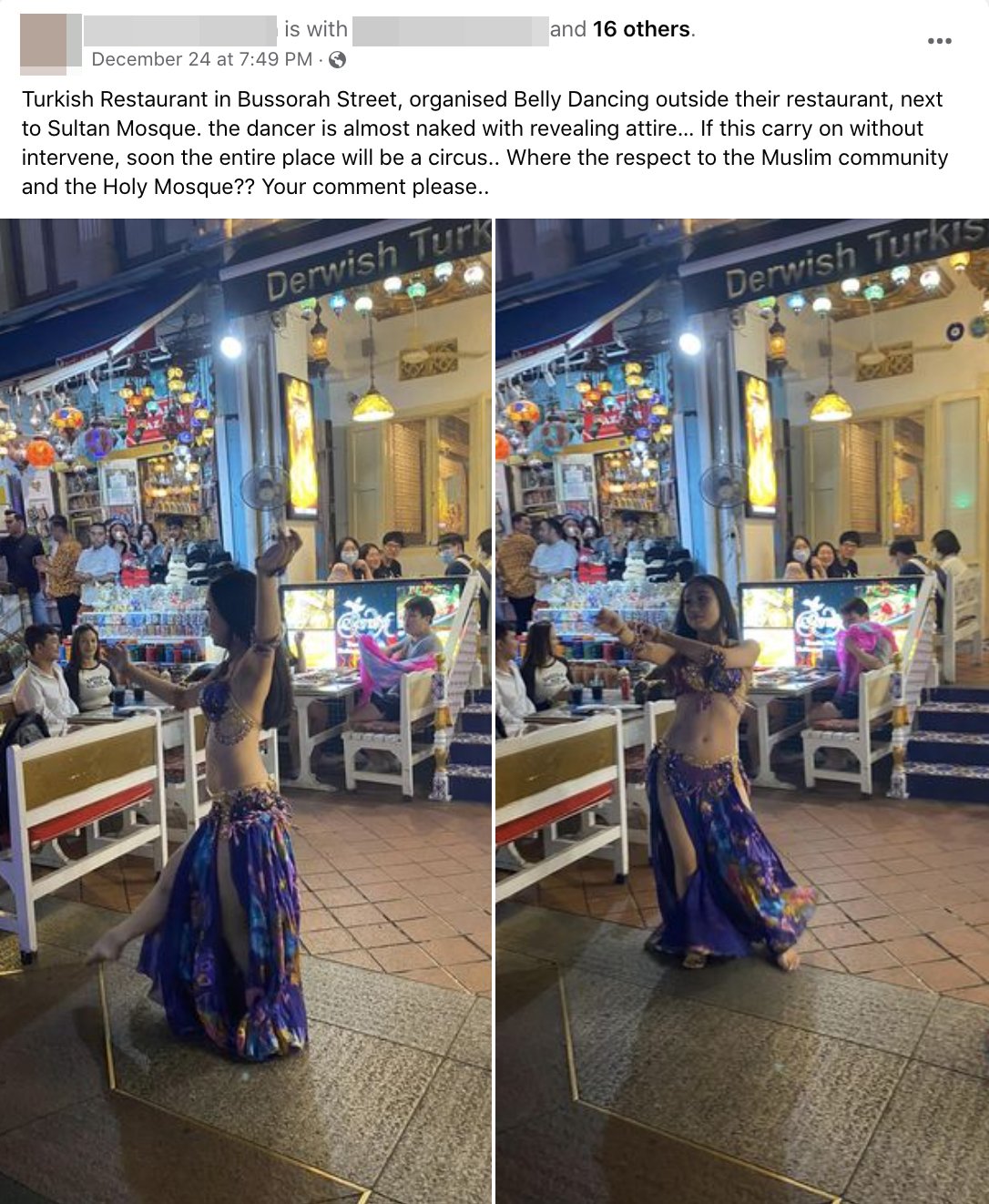 Derwish Turkish Restaurant addressed concerns, clarifying that it was not their intention to disrespect the mosque or the Muslim community.

In the Facebook post shared on Saturday (24 Dec), the man said the Turkish restaurant along Bussorah Street had organised a belly dancing performance outside their restaurant.

The restaurant is located down the road from Sultan Mosque.

He claimed the dancer was “almost naked” in her “revealing attire”.

In photos, the dancer appeared to be wearing a typical Turkish-style belly dance costume consisting of a bra, belt, and skirt.

The man asserted that such a display lacks respect towards the Muslim community and the mosque.

In the comments section, he also claimed that the restaurant was owned by a non-Muslim Singaporean.

The Facebook post drew mixed reactions from Singaporeans. Some agreed with the man that the performance was disrespectful due to the proximity to the mosque.

Others reasoned that belly dancing had been commonly held indoors at restaurants in the area. Hence, it was questionable that the performance was done outdoors near the mosque this time.

Nonetheless, some felt that belly dancing is an art form of Turkish culture and deserves respect too.

Turkish restaurant says they will do better

On Sunday (25 Dec), Derwish Turkish Restaurant took to Facebook to address the matter. They said they did not intend to disrespect the mosque or the Muslim community. 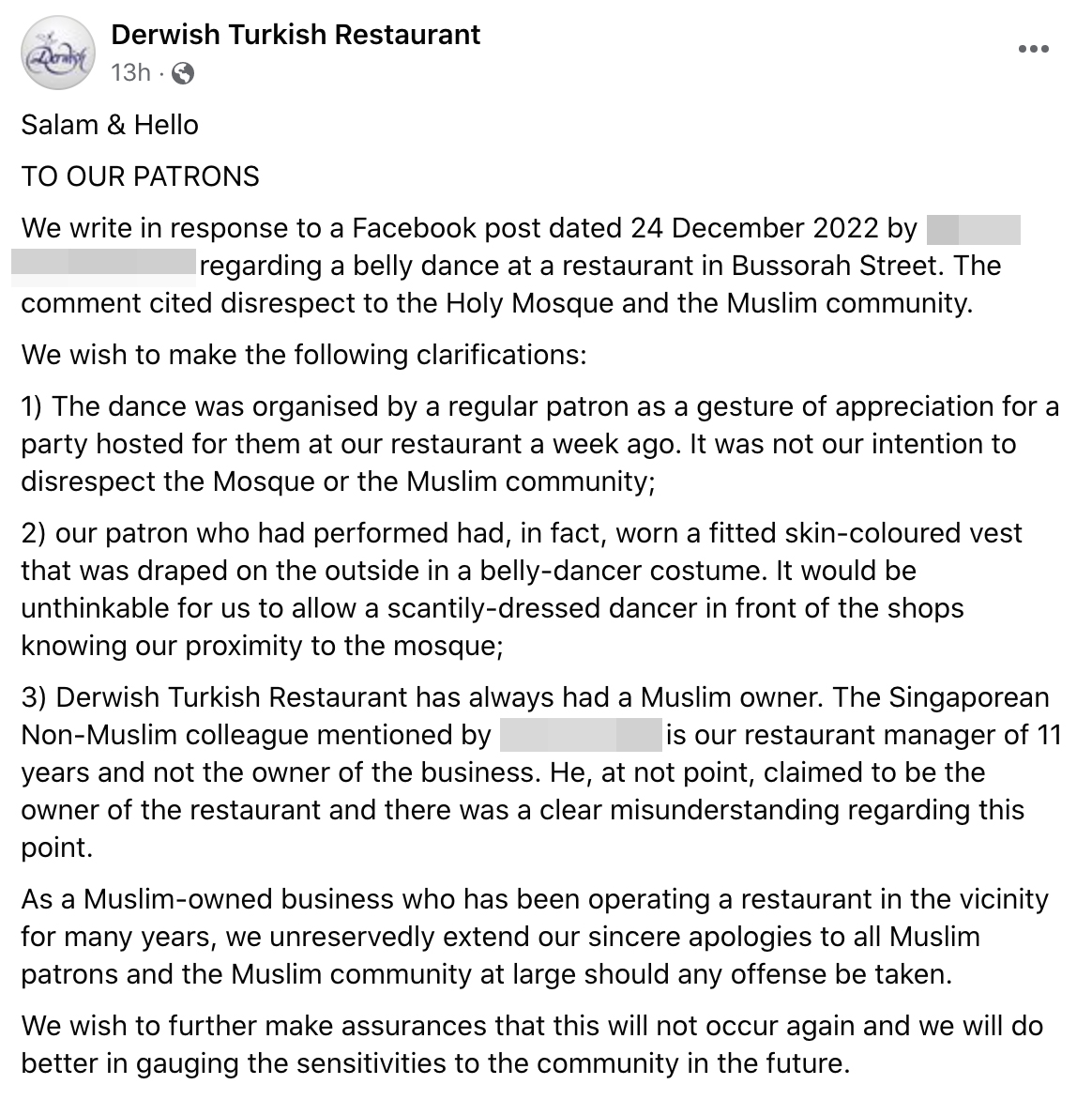 The restaurant clarified that a regular patron organised the belly dance performance as a gesture of appreciation for a party hosted for them at the restaurant last week.

Derwish Turkish Restaurant said the patron who danced had worn a fitted skin-coloured vest before putting on the belly dancer costume.

“It would be unthinkable for us to allow a scantily-dressed dancer in front of the shops, knowing our proximity to the mosque,” they said.

Responding to the man’s comment about the restaurant owner being a non-Muslim Singaporean, Derwish Turkish Restaurant maintained that the owner was Muslim.

“The Singaporean non-Muslim colleague mentioned . . . is our restaurant manager of 11 years, and not the owner of the business.”

Concluding their post, the restaurant apologised to all in the Muslim community for causing offence.

“We will do better in gauging the sensitivities to the community in the future,” they said.