Must Share News – Independent News For Singaporeans
Home People Community We Compare 3 S’pore Universities’ Penalties For Sexual Misconduct & How They...

The recent outrage of modesty incident at NUS caused a lot of uproar, especially after the school allegedly failed to handle the matter professionally.

While the public debates about the fairness of punishments for the offender, we decided to do our own research.

Here’s how the 3 major universities in Singapore claim they would manage sexual misconduct cases.

The NUS code of student conduct has a section titled “Respect for People”, under which falls a single, explicit rule on sexual misconduct.

The general understanding is that the university doesn’t tolerate any form of sexual misconduct at all, be it verbal or physical.

To go into further detail as to what classifies as sexual misconduct, there’s a slightly longer Appendix A which includes examples of such cases.

The section on non-physical misconduct is most applicable to the recent incident involving a male student who allegedly recorded Miss Monica Baey while she was in the shower.

His actions can clearly be regarded as voyeurism, which is the first example on the list. In determining whether a party is at fault, the NUS code of conduct is very clear.

But things get a little complicated when punishment comes into the picture.

The university has its own statutes and regulations governing student discipline, and they read very much like Singapore’s statutes.

Large parts of the documents cover legal jargon like definitions of terms, before arriving at the actual procedure. This is how NUS’s process pans out:

But to reach steps 3 or 4, the offence committed must first be deemed “serious”, which NUS determines as follows:

Anything else that only affects “academic, administrative, sporting, social or other activities of the University to a minor or limited extent” is a minor offence, and only demands the attention of the Heads of Academic & Non-Academic Units.

Minor offences will risk the following punishments, which would mostly disrupt a student’s academics more than anything else. 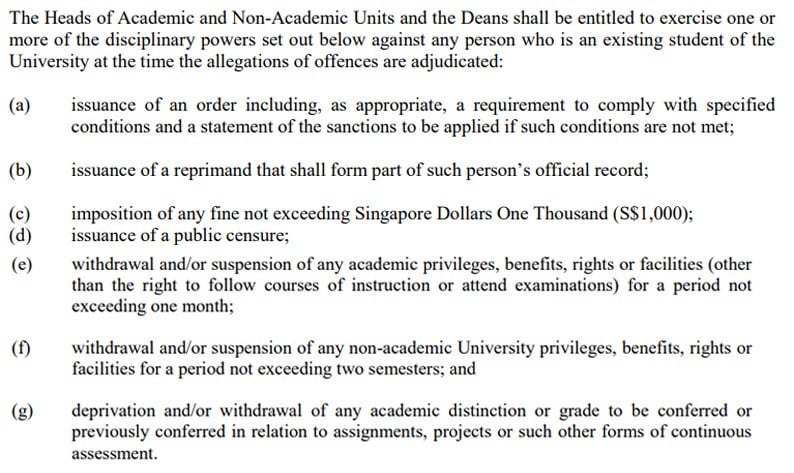 Punishments are the same for serious offences, except for several points — offenders risk being expelled, losing financial assistance and facing a fine of up to S$10,000. 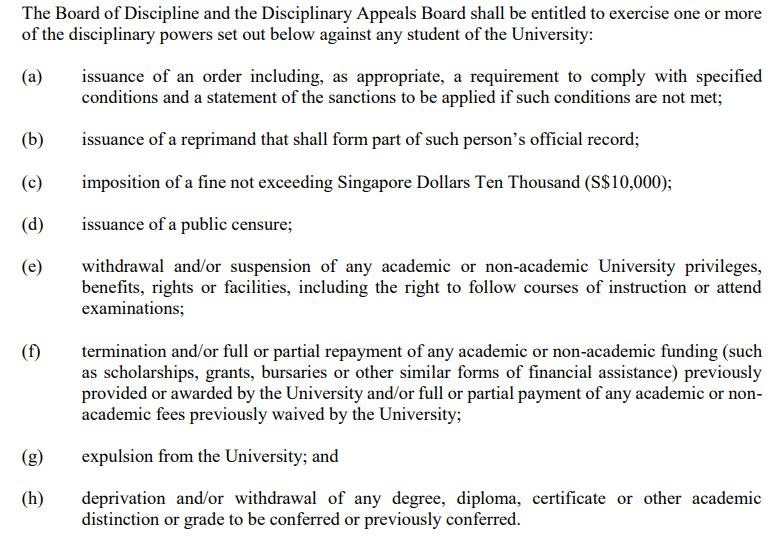 Formalities aside, the NUS policies don’t seem very transparent after all.

There’s no clear directive as to when the disciplinary boards can step in and deem the case a serious one. Hence, the standard procedure is unclear to the average reader.

Like NUS, NTU’s list of offences is also very easy to understand. All forms of harassment, sexual or otherwise, “are expressly forbidden in NTU”.

Punishments for breaching the code of conduct aren’t wildly different from NUS, but at least the university puts them in simpler terms.

All decisions are similarly made within the school’s authority, with the order of proceedings clearly drawn out — Director of Students selects a staff member to conduct investigations, and can convene a board for discussion if findings are inconclusive.

But the one thing NTU adds later that NUS lacks is the possibility of external, legal intervention.

This clause goes to show that if need be, the university will bring the matter up to Singapore’s law enforcement and even to court.

While the statement is merely provisional, credit goes to NTU for acknowledging that certain cases may fall out of their control and will be better managed by legal authorities.

Perhaps to make the rules more accessible to students, SMU compiled them into a PDF brochure complete with colourful designs. 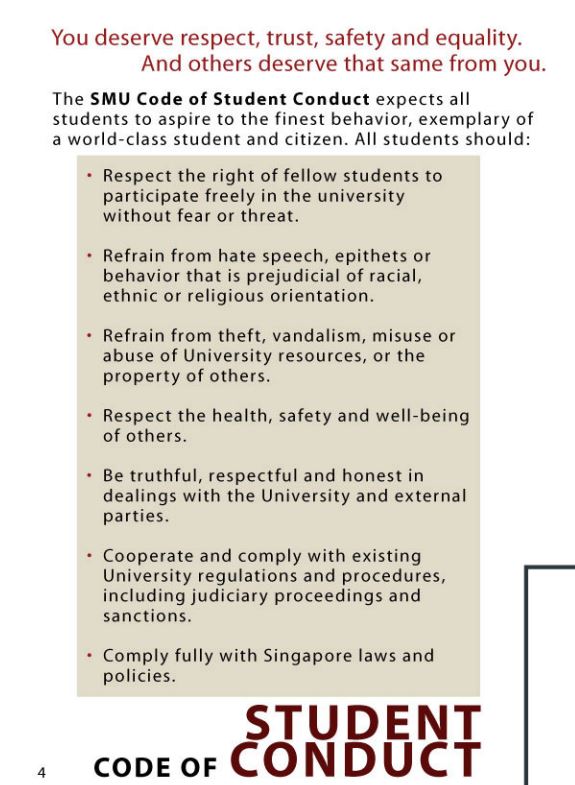 Their effort is commendable, but they may have discounted crucial details which would explicitly mention the punishable offences.

In this instance, outrage of modesty probably falls under disrespecting the “health, safety and well-being of others”.

Punishments for breaking any of the above are very straightforward, echoing the other 2 institutions.

The only issue is that SMU doesn’t specify how different punishments may correspond with different offences based on their severity. 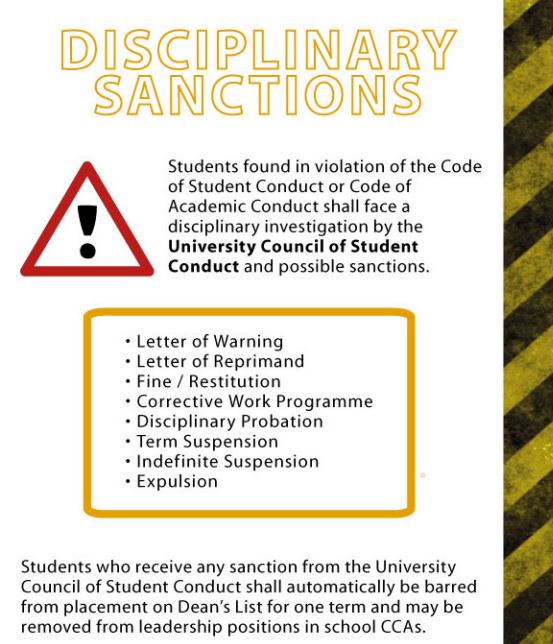 It doesn’t help that these 2 sections are elusively mixed with 12 other pages on plagiarism and academic misconduct. You’d wonder if this is just a summary of the actual content.

Unfortunately, no other documents on the code of conduct or legal procedures can be found on SMU’s website.

In summary, no school is free from flaws in its regulations and standard operating procedures (SOP).

The exhaustive legal jargon in NUS‘s statutes may hinder students’ understanding, and confuse rather than clarify matters.

On the other hand, SMU’s oversimplification of the rules could undermine the gravity of very serious offences.

Among the three, NTU strikes the best balance between making the information accessible yet legally professional. Even so, they can still afford to explain the penalties for offences more clearly, to avoid any grey areas.

Across the board, schools should try to have more comprehensive sets of rules and regulations to protect students’ well-being. Students are also far from silent on the matter.

A well-articulated open letter signed by close to 500 NUS students on The Online Citizen demands for constructive changes to be made in the aftermath of this incident.

Change has to begin somewhere. If the verdict in Miss Baey’s case can’t be amended, at least parents and students can rest easy if the school’s statutes reflect our changing times and clearly define kinds of misconduct that demand police attention.