The Virus Vanguard probably won’t be reassembled any time soon, after its artist abruptly left the team he founded, Band of Doodlers (BOD).

Posting on Facebook on Wednesday (22 Apr), Mr Mas Shafreen announced his departure from the group that has received considerable flak since the Government named them as collaborators in the concept.

BOD confirmed his departure as well on their Facebook page, thanking him for his years of contribution to the team. 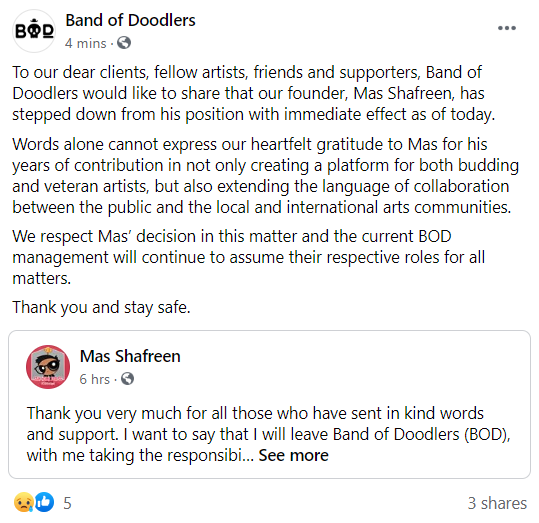 The collaboration was meant to educate on Covid-19 ‘Circuit Breaker’ guidelines like maintaining safe distancing, but the execution left many fuming.

To top things off, the artist was accused of tracing his Virus Vanguard characters from other artworks, reported local news portal Geek Culture.

BOD and the artist have not acknowledged the allegations as of press time.

Prior to his departure from BOD, Mr Mas addressed the Virus Vanguards issue, stating he was solely responsible for how the debacle unfolded. 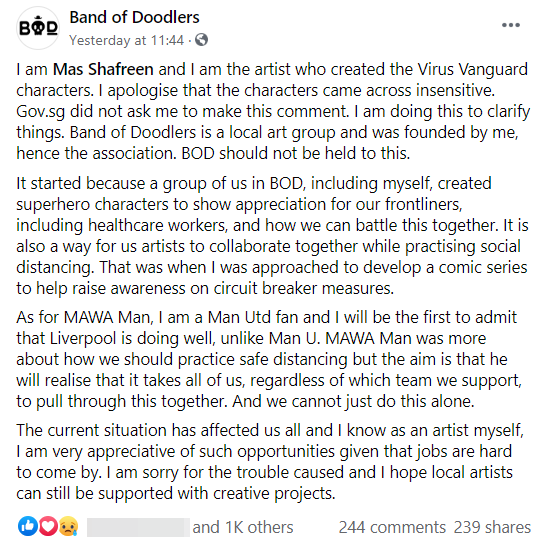 Only the original concept, which Mr Mas and 2 others in BOD worked on, had anything to do with BOD. Subsequently, the Government commissioned him alone to create a comic series to raise awareness on ‘Circuit Breaker’ measures.

At least, that’s the word going around on social media.

An artist claiming to be part of BOD commented on a Reddit thread, stating as much. 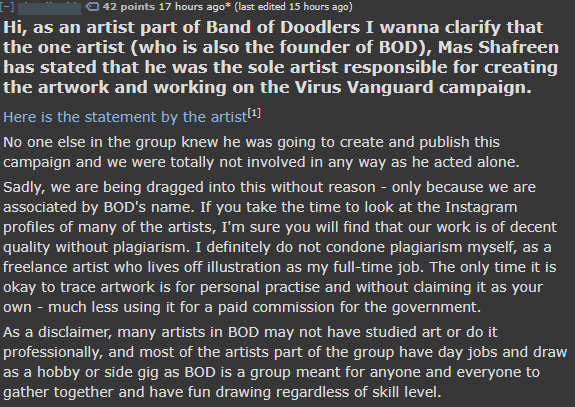 Yesterday (21 Apr), Geek Culture ran a report that the artist behind Virus Vanguards had apparently traced some of his characters using other artworks.

If true, this is equivalent to plagiarism, as he didn’t credit the original works.

Here’s an example which user dodgethis_sg brought to attention on the Singapore subreddit. The girl’s pose bears an uncanny resemblance to this artwork of Peni Parker from Spiderman: Into The Spiderverse, which Geek Culture sourced.

Another reference shows a disconcerting similarity with an artwork of Storm from X-Men on DeviantArt.

Netizens offer thanks to artist for bringing community together

Despite the plagiarism accusations, several in the community apparently did not wish for the artist to step down.

Some acknowledged his contributions to the local art scene and wish him the best.

Others even asked him to reconsider his decision.

From those accounts, it seems he has helped many artists here with the founding of BOD and setting up a community where they can collaborate.

Unfortunate saga in what was a misstep

The Virus Vanguard fiasco, where the Government name-dropped BOD only after backlash, will not help artists here.

However, it would be cutting the forest for a rotted tree if we condemn BOD or other local artists for such incidents. This misstep is on the artist himself.

Additionally, many commissioned artworks are at the request of clients who may make unreasonable demands.

Many other artists out there are respectable and either have fun drawing as a hobby or are working hard at their craft.

We don’t have to condemn the profession or Band of Doodlers because of a misstep by those involved in Virus Vanguard.

Let this serve as a lesson for artists to be more honest with their work, and for the rest of us not to be too quick to judge.