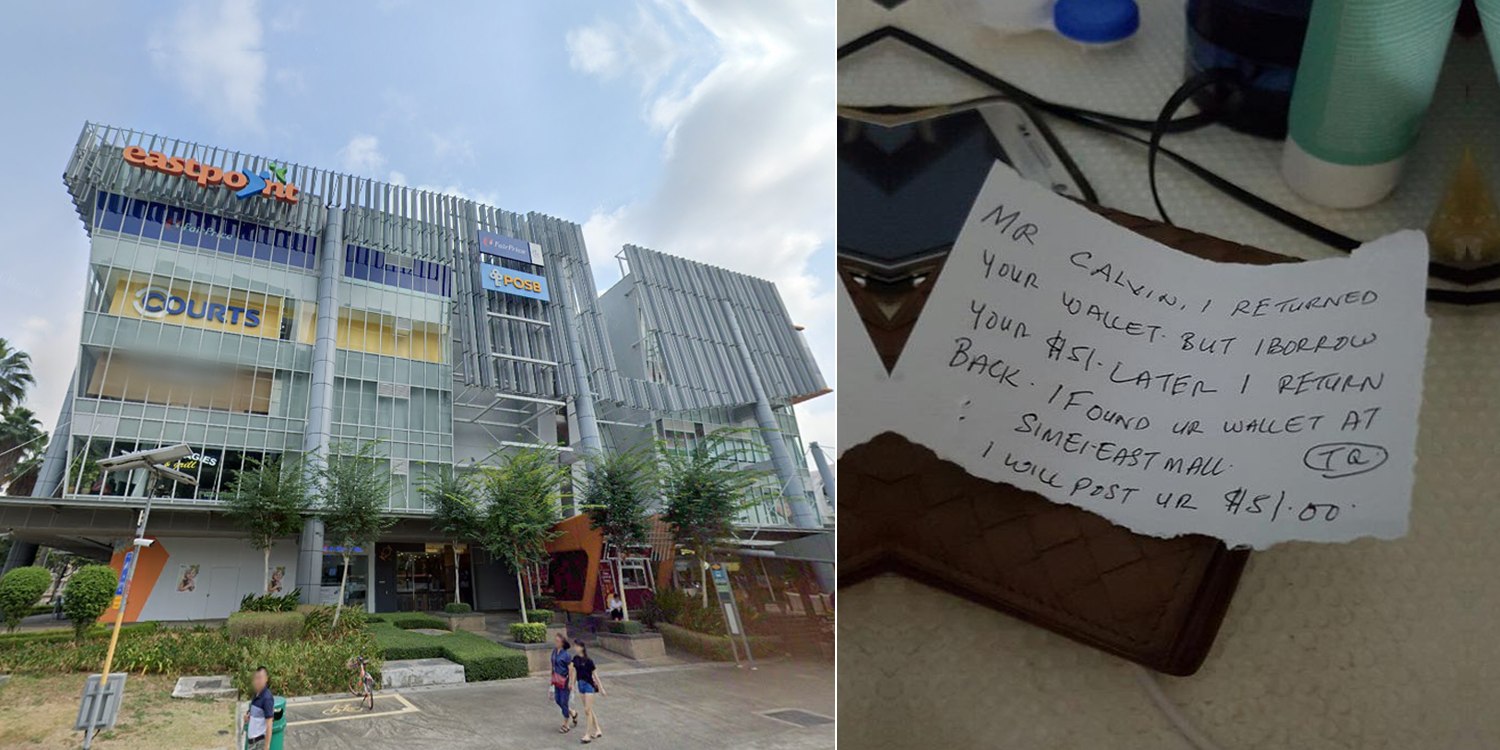 The finder had passed away, but her daughter fulfilled the promise.

Losing a wallet can ruin one’s day instantly. A netizen thought that he would never see his wallet again after losing it in a Simei mall back in 2016. 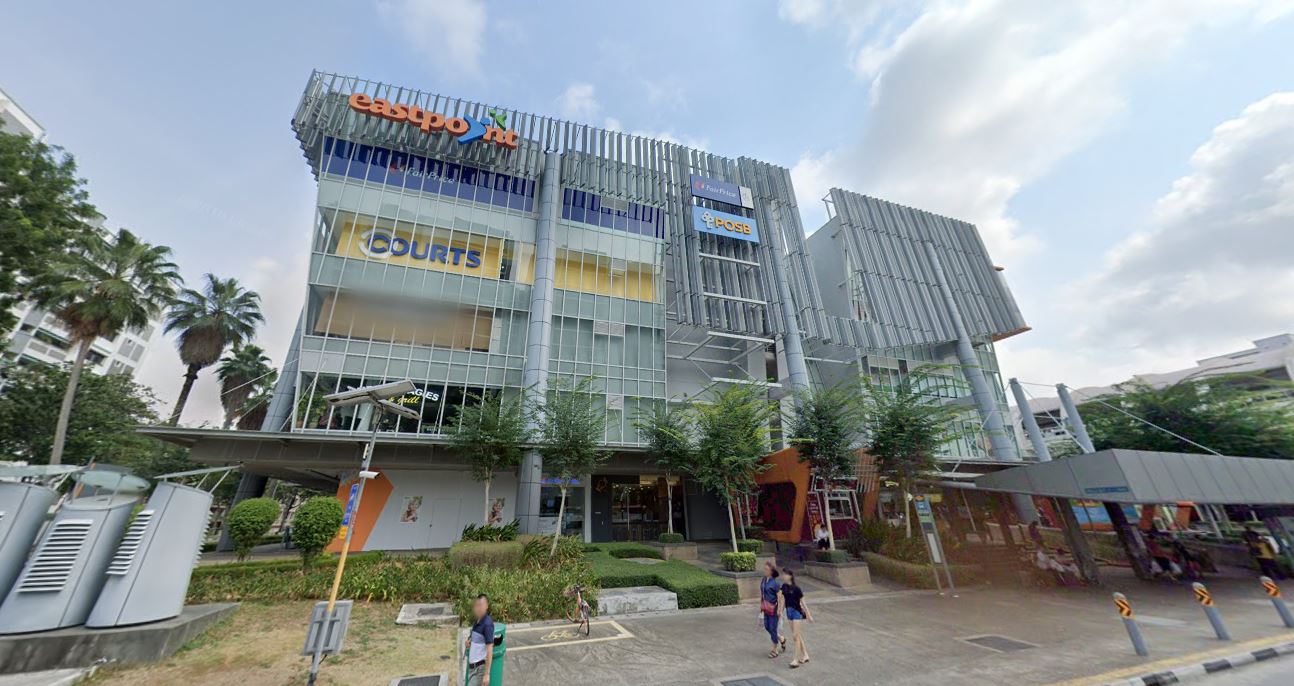 However, a week after the wallet’s misplacement, Mr Calvin was astonished to find his wallet lying at his doorstep with a note. 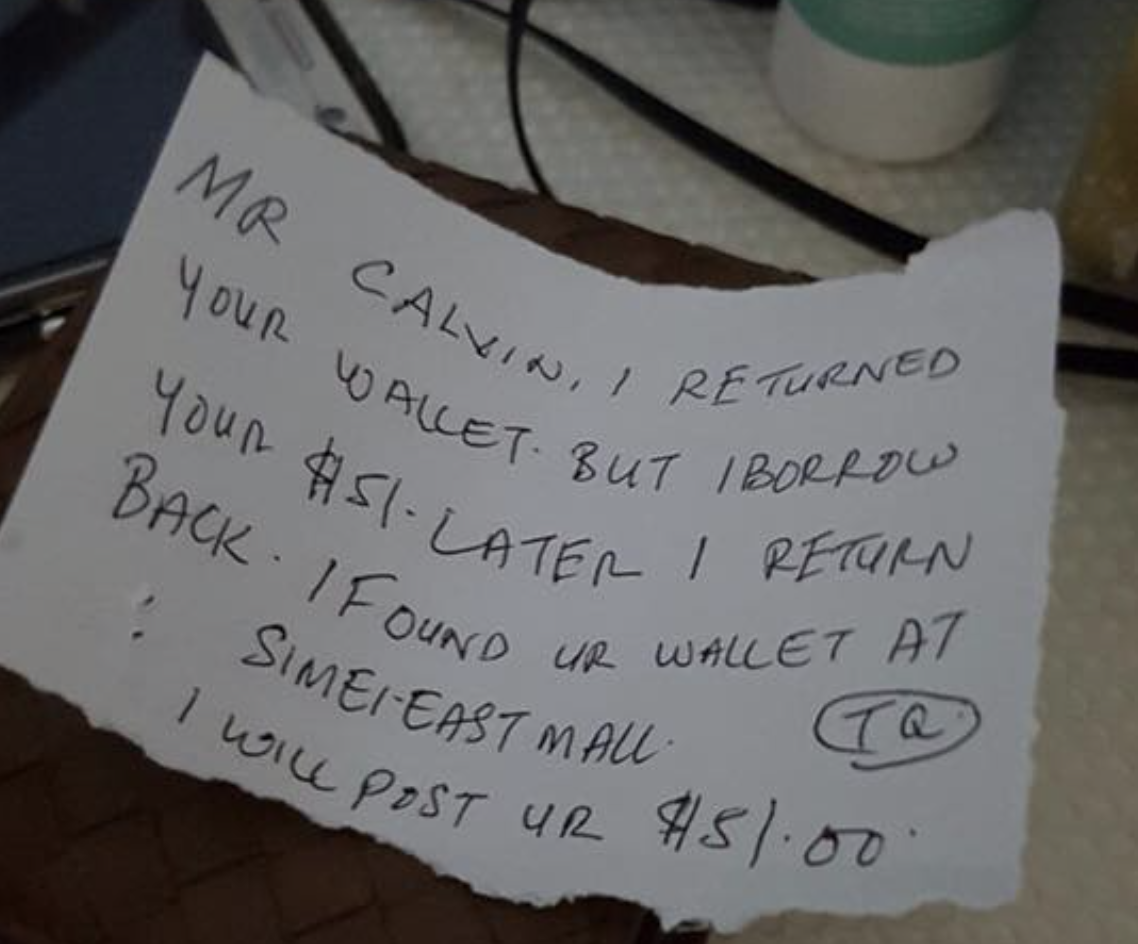 The note promised to return $51 which the finder borrowed. After 2 years of waiting, the netizen was surprised at how this sum eventually came back to him.

Though the story was posted in 2018, it has recently gained traction again for the inspiring moral behind the viral tale. You may read it here in full, with over 7.2k shares at the time of writing. 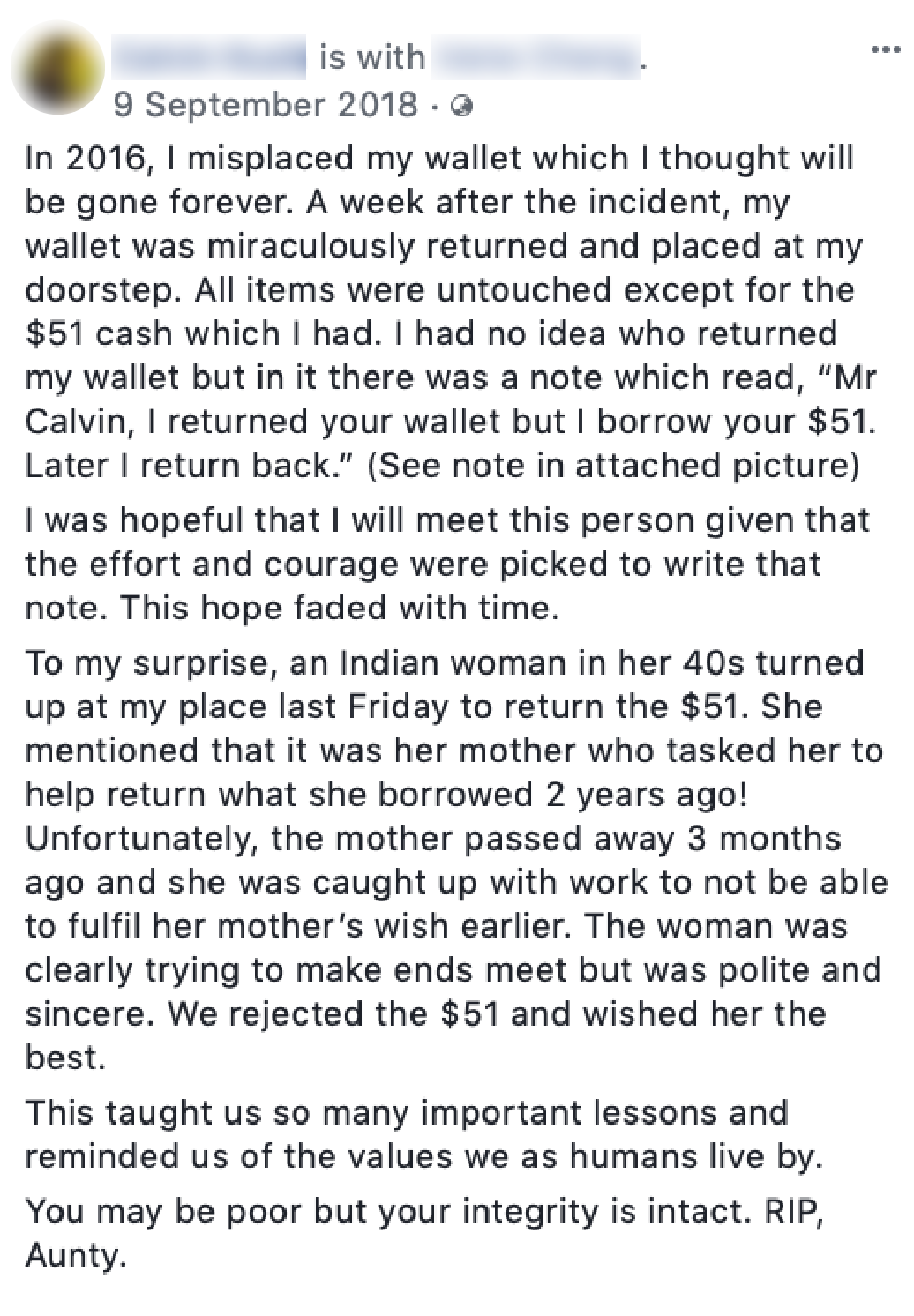 We summarise the story below, as proof that small acts of kindness always have a way of coming back to us.

Note promised to return the $51 borrowed

After Mr Kuah lost his wallet in Simei in 2016, he was surprised to see it turn up on his doorstep with everything else intact. 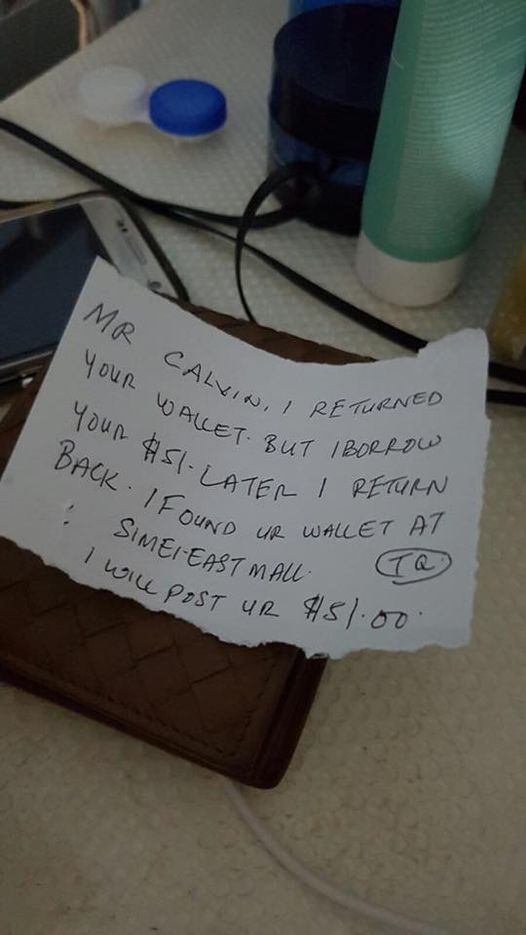 Except $51 in cash, which was missing. The finder described locating the wallet at Simei East Mall – presumably Simei’s Eastpoint Mall – in a short handwritten note.

In the finder’s own words, the note read,

Mr Calvin, I returned your wallet but I borrow your $51. Later I return back.

The note ended with the finder promising to “post” $51 back to him.

Mr Calvin shared that he held on to the note & promise over the years, looking forward to meeting the finder once more.

He added that it must have taken a lot of effort and courage to return the wallet and write the note.

After all, the finder of the wallet could have simply pocketed the money.

Promise fulfilled by finder’s daughter instead

By the time 2 years had passed, the netizen’s hope of meeting the wallet finder had faded. However, to his surprise, an Indian woman appeared at his doorstep in 2018 to return the $51.

The woman explained that her mother was the one who found the wallet and tasked her to return the money. Sadly, she had passed 3 months prior, but her daughter wished to fulfill her promise.

Upon hearing the story, Mr Calvin kindly rejected the $51 in cash, as he surmised that the lady and her family may have been trying to make ends meet.

Netizens touched by integrity of lady who passed away

Though the original Facebook post was dated in 2018, it has gained traction once more in 2020, with netizens commenting on how this story has touched them.

One netizen noted that both the lady and her daughter were sincere because both intended to return the money.

Another comment said that the old lady must have been going through a rough patch to have “borrowed” the money.

Whichever the case, we’re glad that the story teaches us the value of integrity & staying true to the promises we make.

Acts of kindness always return to you eventually

Although Mr Calvin never got to thank his wallet’s finder for keeping her promise, we’re glad that he decided to help the family out by rejecting the sum after 2 years.

We can learn from both the daughter & mum’s resolve to return the money, that a simple act of kindness can go a long way.

And more importantly, continue to impact and touch our lives in mysterious ways.

Have you ever misplaced a wallet in Singapore? We’d love to hear your stories in the comments below.