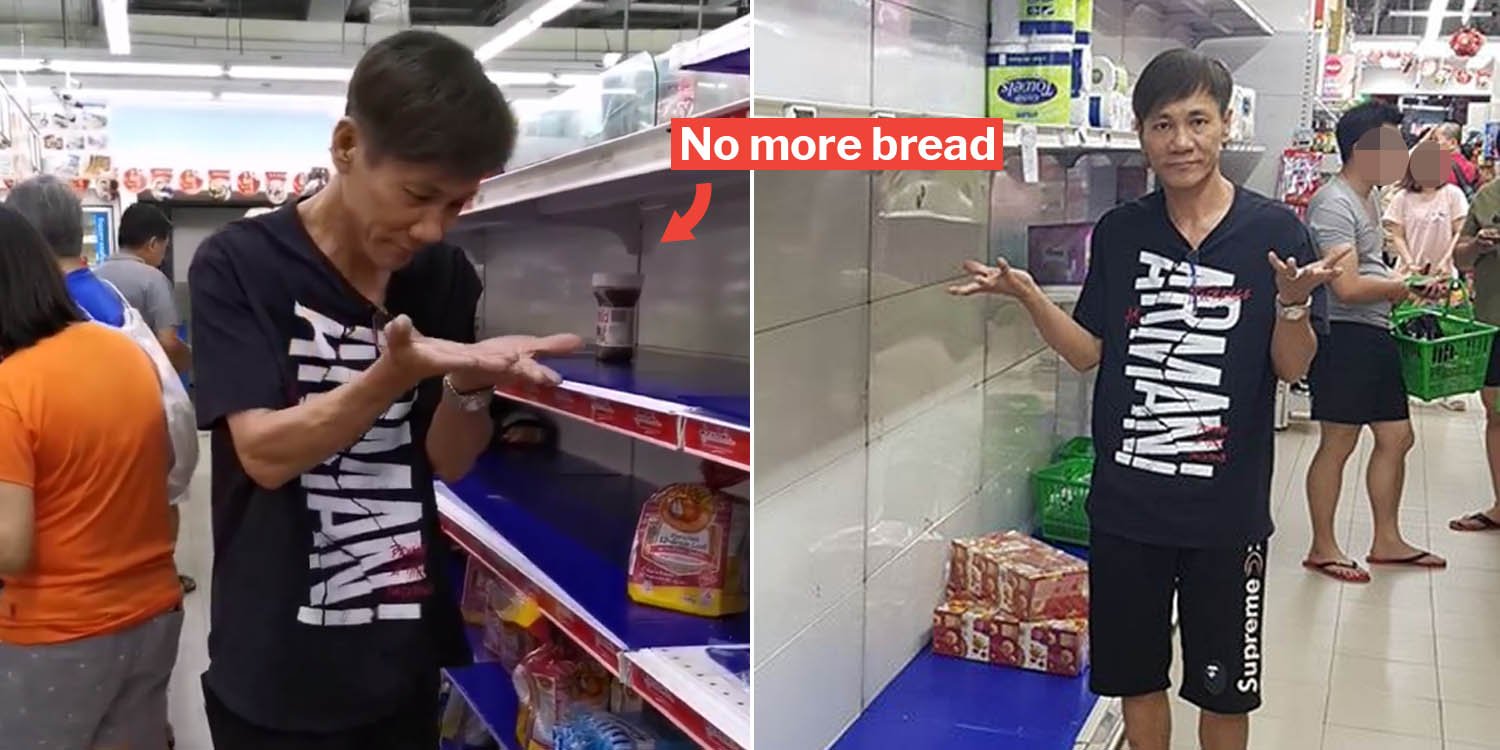 Following the announcement on Friday (7 Feb) that Singapore’s DORSCON level has been raised to orange, countless people rushed to local supermarkets hoping to stock up on groceries and other daily necessities. At around 1am on Saturday (8 Feb), the 59-year-old Singapore visited an undisclosed supermarket in Singapore, only to find empty shelves once filled with highly sought-after commodities. 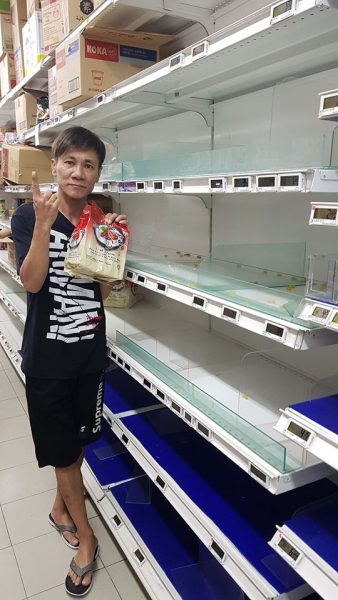 At around the same time, a netizen named Siewmek Yau uploaded a 2-minute long video showing the getai singer ‘touring’ the supermarket, documenting his hilarious reactions.

You can watch the footage in full below.

At the start of the video, Wang was seen touring the vegetable section of the supermarket. 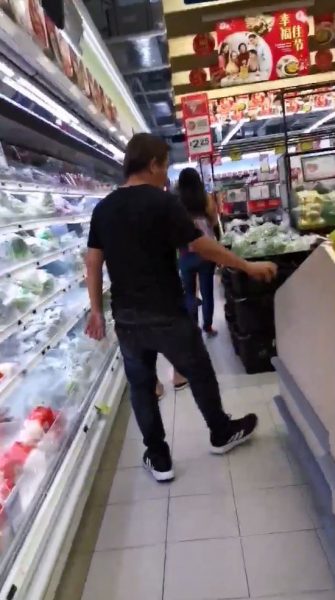 The area appears well-stocked, with plenty of greens both in the refrigerated and non-refrigerated sections. 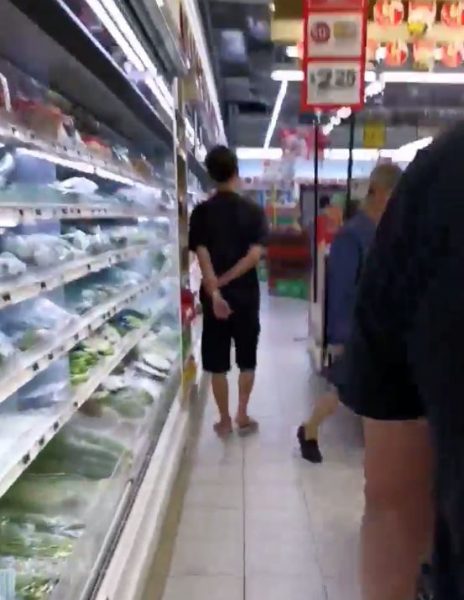 He then proceeds to the bread section. While it would normally be filled with a wide variety of our favourite breakfast food, the shelves were visibly empty, with just random loaves of bread lying around. 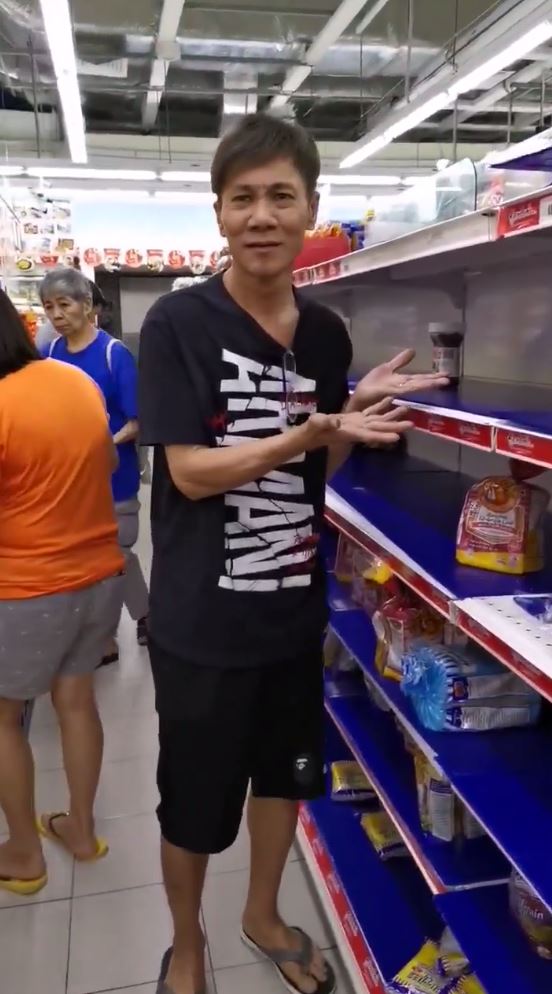 We can’t ascertain what kind of bread those are, but if we were to guess, those must be the less-popular ones, like multi-grain. Just saying.

Oh, did we mention there was a random jar of Nutella spread lying there? See lah, rushing to buy stuff then forget to return things to where they belong. 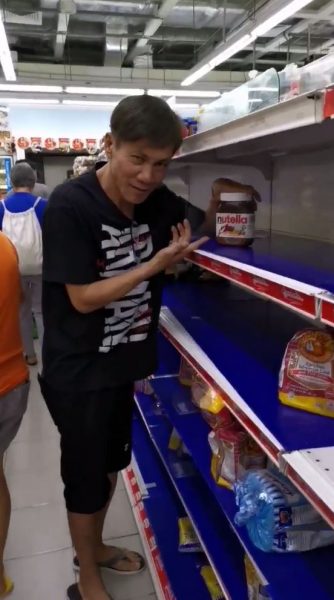 Just like the bread section, the adjacent egg section was also hit hard by the panic-buying. 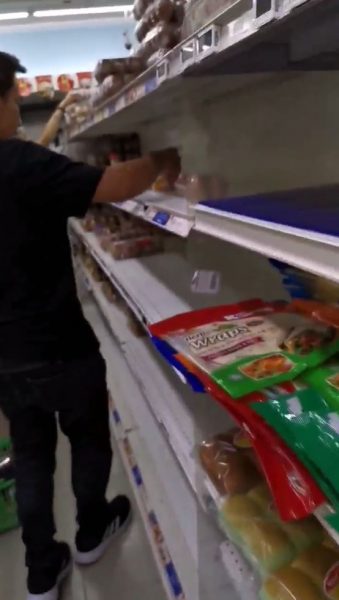 Wang then proceeds to the canned food section, and as expected, was greeted by the shiny metallic paint of the shelves, exposed after the products have been wiped off. 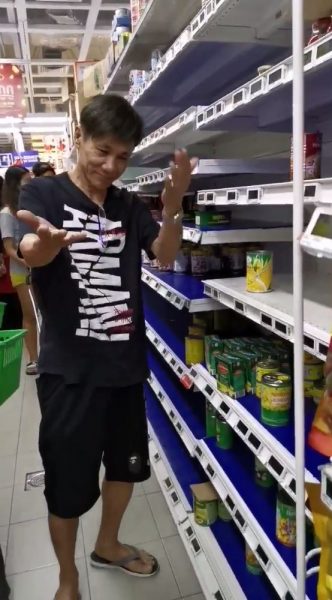 He reached out randomly for 2 canned product on the shelves and signalled in disbelief that there was only 1 of each left. 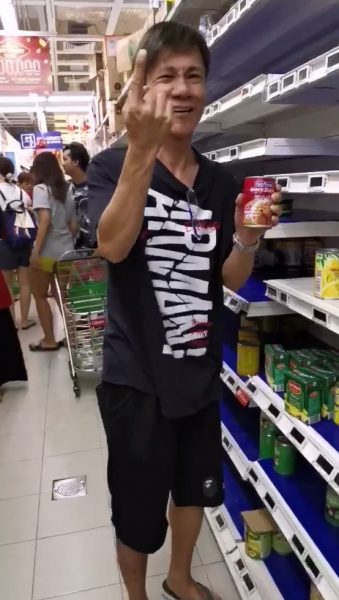 Apparently food-related groceries aren’t the only ones that flew off shelves.

As Wang proceeds to the tissue and toilet paper section, he was confronted with the disappointing reality that was once again, empty shelves. 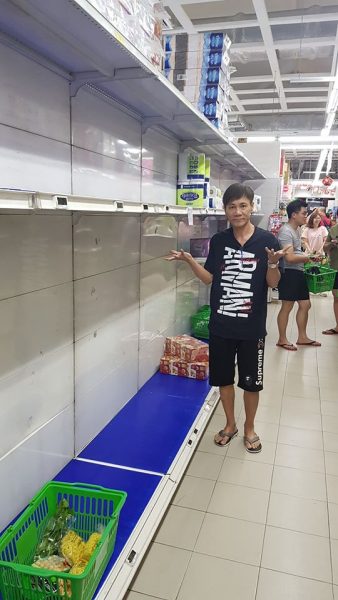 This time, the void was amplified by the height of each compartment, and its effect was profound on the getai veteran, as he stared longingly into space, probably wondering what he would now use to clean his mouth after having mala. 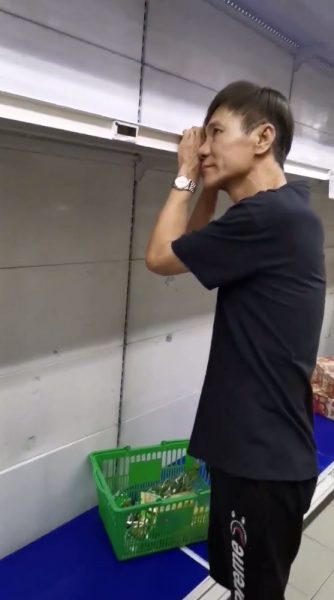 At the same time, a fellow shopper recognised Wang and screamed in delight.

Being the entertainer that he is, Wang instantly squats on the empty rack and posed hilariously for the camera. 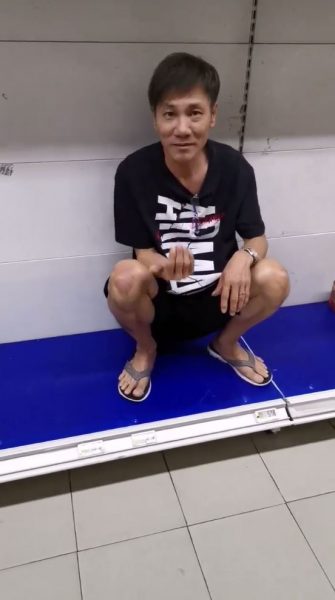 Throughout the video, Wang remains silent, yet his expressive emotions spoke volumes about the level of disbelief he was in.

Do not panic buy groceries in light of DORSCON orange

While the video may have been filmed in a light-hearted fashion, it nonetheless highlights the very real situation of groceries in supermarkets getting wiped out due to panic-buy.

Even though the raising of DORSCON level from yellow to orange is certainly a cause for concern, there is no need yet to panic and stockpile daily basic supplies as our supermarket’s supply chains remain robust.

If this continues, the devastating effects caused by the unnecessarily panic-buying could well be worse than the actual consequences brought about by the coronavirus, and that’s a situation we definitely want to avoid.