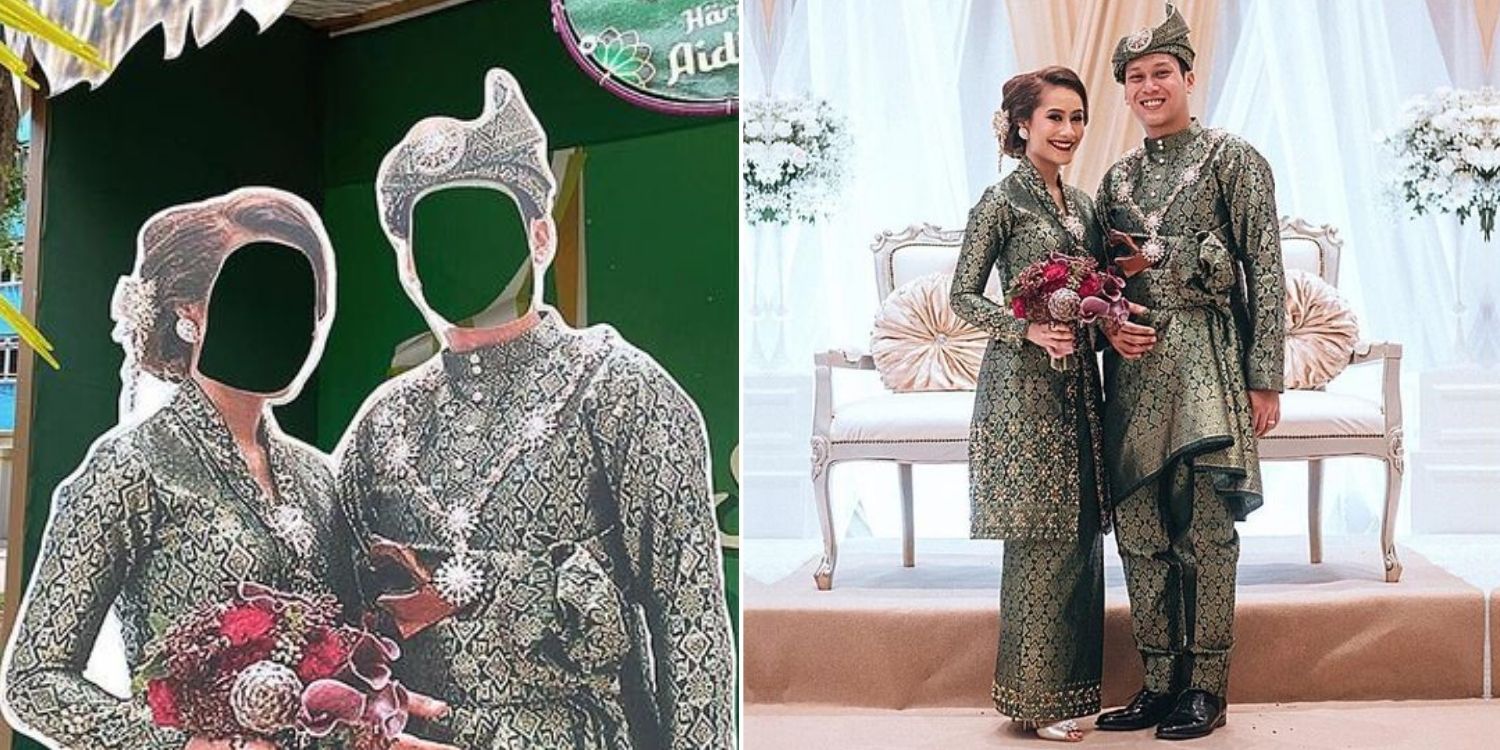 Wedding photos are precious to couples.

Seeing our faces on public display may be flattering, but not for a particular couple whose wedding photo unexpectedly became material for Hari Raya decorations.

Horrified at the discovery, Ms Sarah Bagharib took to Instagram to call out the relevant authorities’ actions. 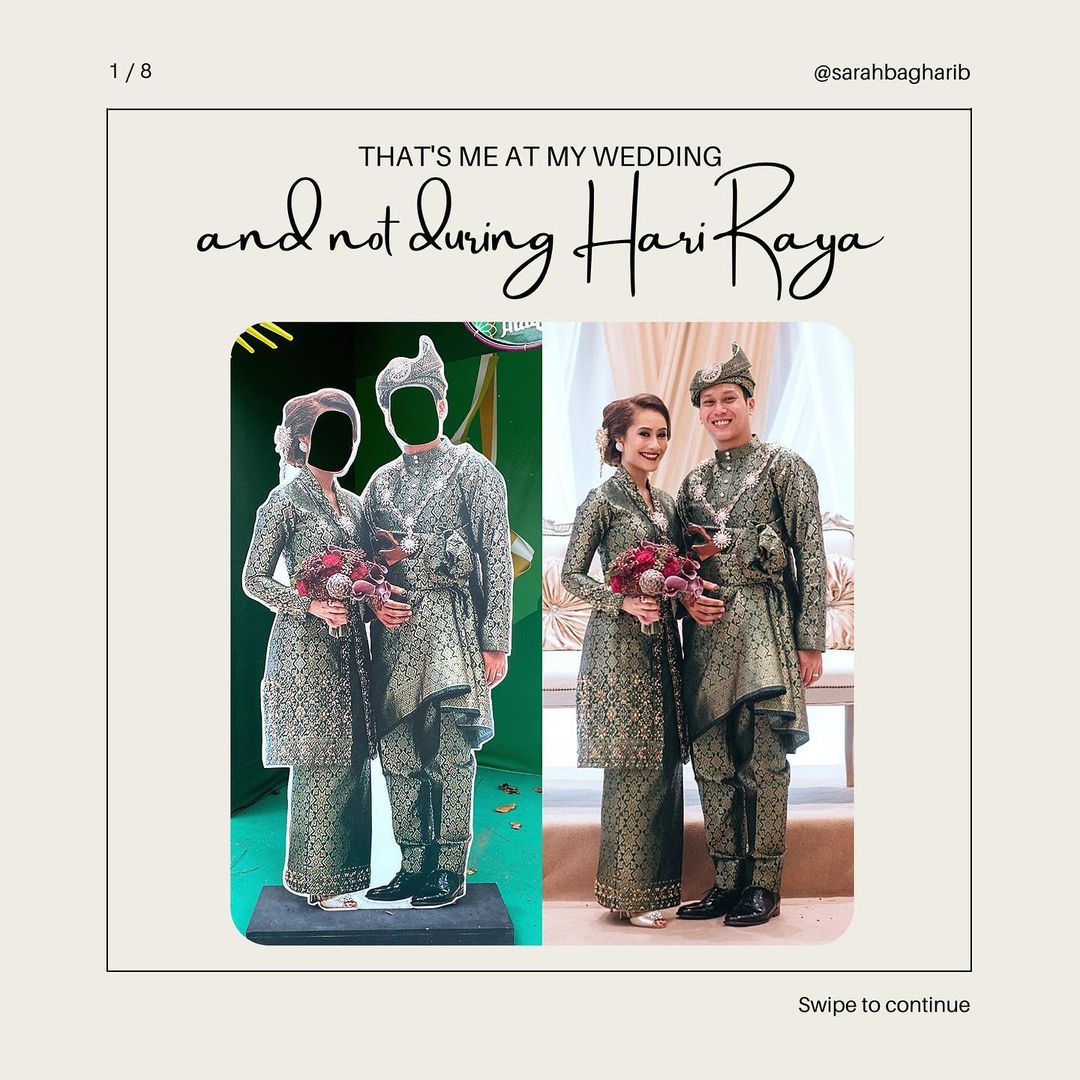 Pointing out the various faults in using the photo, she shared why the incident has left her feeling rather upset.

On Friday (28 May), Ms Sarah posted her peculiar story on Instagram, which garnered several thousand likes and hundreds of comments from equally shocked netizens.

According to her, a friend had alerted her to the curious standee, which bore a striking resemblance to her own wedding photo.

Placing them side by side, the similarity is uncanny, which raised privacy concerns as Ms Sarah didn’t recall consenting to the photo’s use for that purpose. 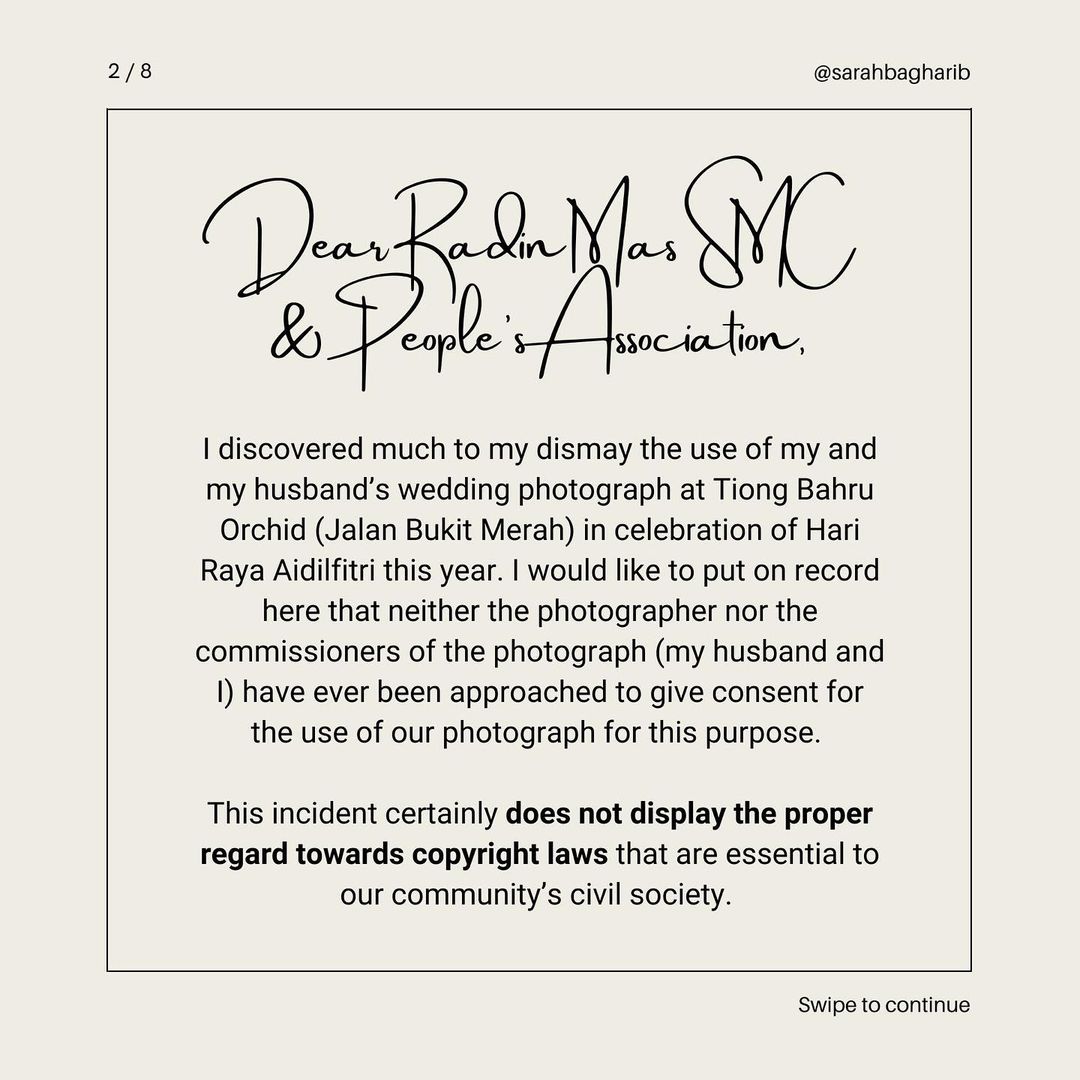 Even the photographer was allegedly unaware of the photo’s usage.

On this count, Ms Sarah noted that the incident demonstrated a lack of “proper regard towards copyright laws”.

Use of wedding photo for Hari Raya event culturally inaccurate

The mistakes didn’t stop there, as she explained the inaccuracy of using Malay wedding photos for Hari Raya celebrations. 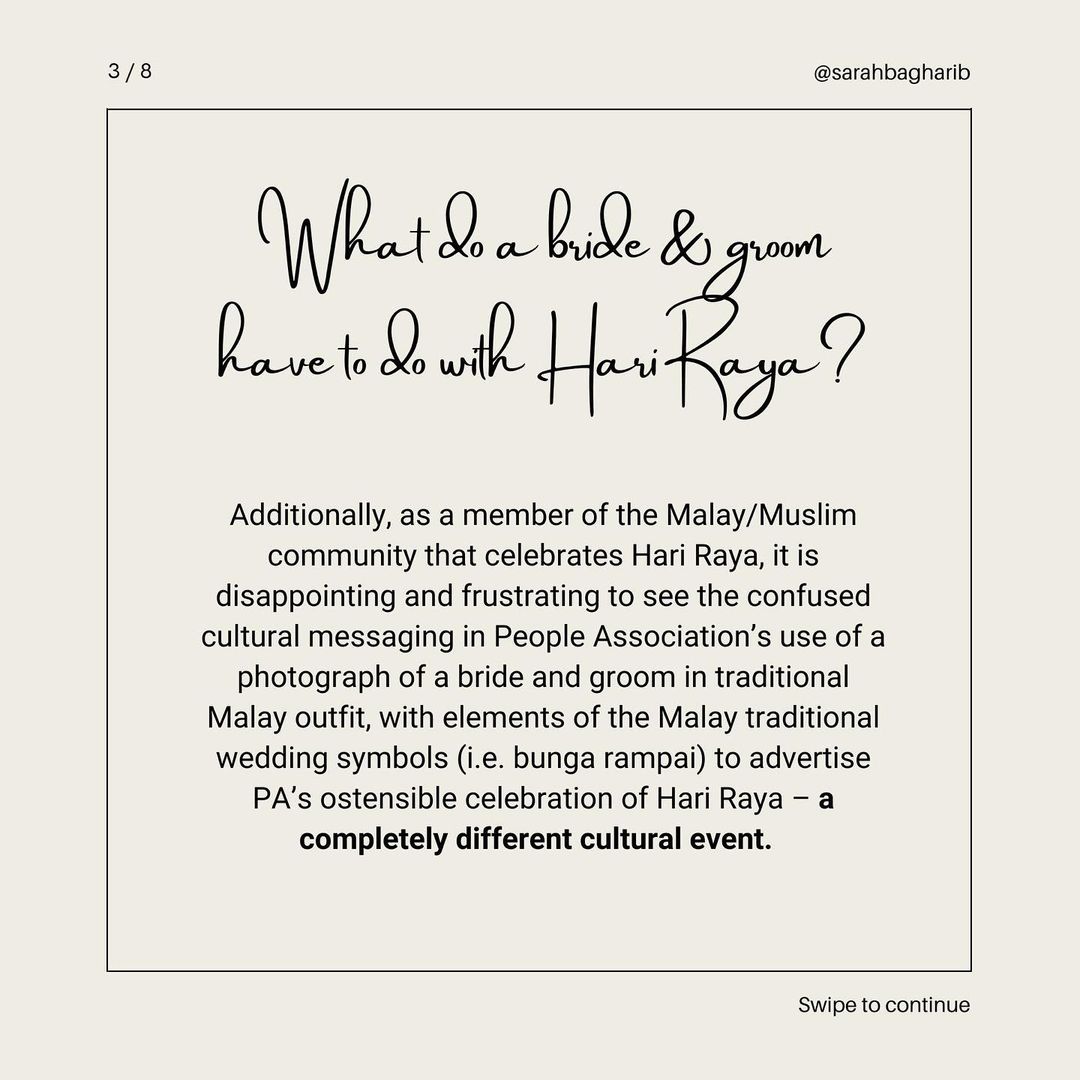 Since the 2 cultural events are distinctly different, Ms Sarah claimed that the apparent confusion only showed the People’s Association’s (PA) “superficial knowledge of Malay/Singaporean Muslim culture”. More personally, she was terribly upset that a photo that means a lot to her and her husband had been used as a “theatrical device”. 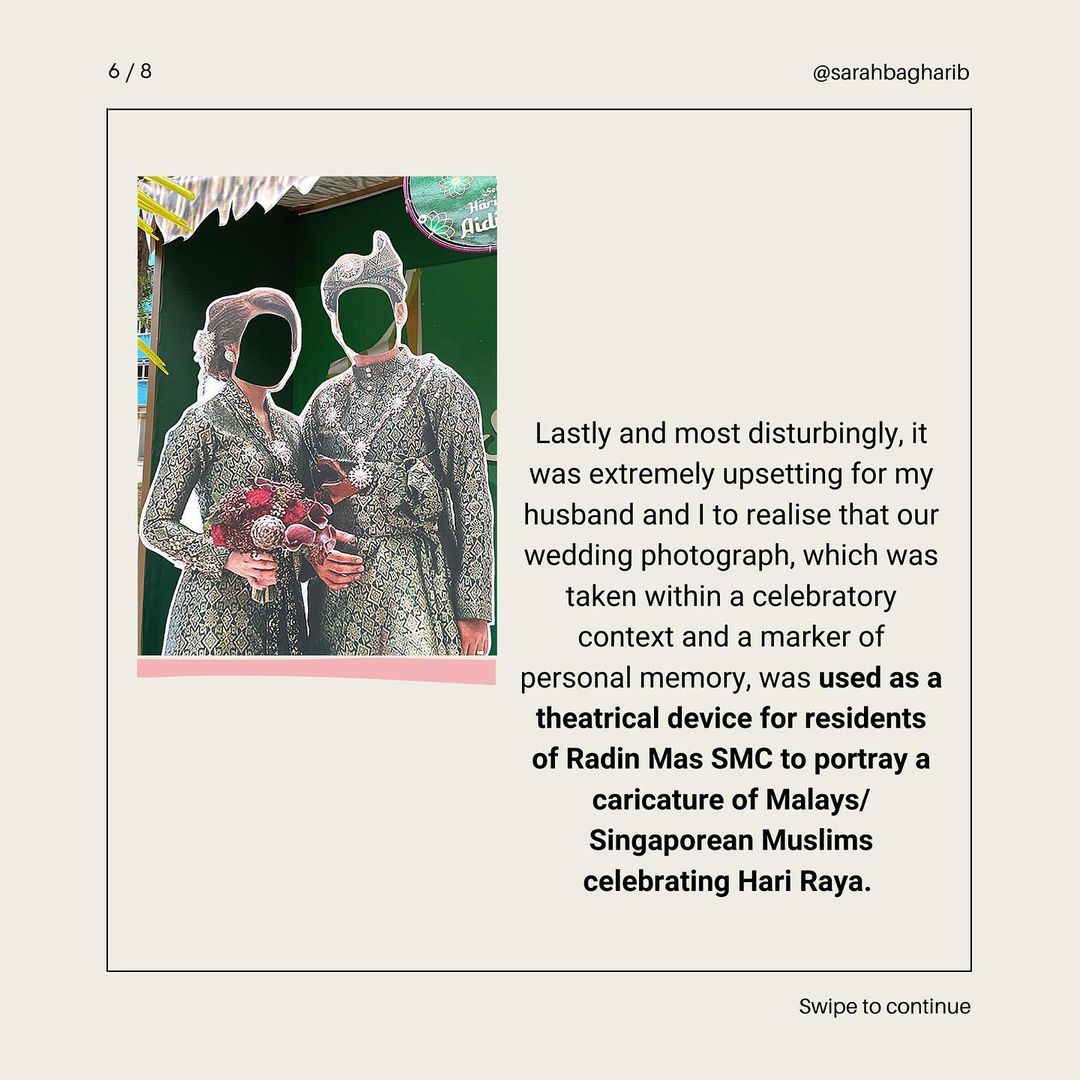 Saying that it was “insensitive on many levels”, she urged the authorities to respect their privacy, as well as the Malay culture.

He claimed to have asked the SMC to “investigate the matter and to remove the photo immediately”.

Ms Sarah also told MS News that the PA has apologised and promised to investigate the matter.

In response to queries from MS News, PA released a statement taking responsibility for the oversight. Here’s their statement in full:

The vendor came up with the concept and design for the decorations. Unfortunately, in doing so, they downloaded and used Ms Sarah Bagharib’s photo from an online source and then used it for a cut-out standee. These decorations, including the standee, were then put up by Radin Mas CO.

This should not have happened. Neither our vendor nor Radin Mas CO obtained any permission to do so. This is against the policies which have been put in place. We have since spoken to the vendor on the seriousness of this infringement and will follow up with the appropriate steps.

Nonetheless, the PA, including Radin Mas CO, take responsibility for this error as we had oversight of the matter, and the decorations were allowed to be put up.

We take such breaches, including copyright violations, seriously. We will put in place stricter internal controls and processes to ensure this does not happen again.

In addition, we regret the use of the photo to depict the Hari Raya occasion. This was not appropriate.

We will take steps to guide and help our staff and, as far as possible, external vendors as well, to be more culturally attuned and sensitive.

We have apologised unreservedly to Ms Sarah Bagharib and her family for the distress which our mistake has caused. We have given her an explanation of the circumstances which led to the error and have also offered to meet with her to address any other queries which she might have.

As soon as we were made aware of the issue, we immediately removed the standee.

Though undeniably strange, this incident shows that there’s still room for improvement when it comes to cultural sensitivities.

Indeed, we should be more proactive in educating ourselves about different cultures and learning to respect each other better.

And unfortunately for the PA, this becomes an impetus for them to review their internal procedures before approving certain projects.

Hopefully, they’ll learn from this incident and avoid such errors in the future.