Wheelchair-Bound Malaysian Climbed Down A Slope To Rescue Kitten

The world’s a tough place to live in when you’re alone.

So imagine what this helpless kitten was going through, stumbling around unfamiliar places for survival, only to get trapped in a huge drain.

Fortunately for the little critter, a kind man took notice of its distress. 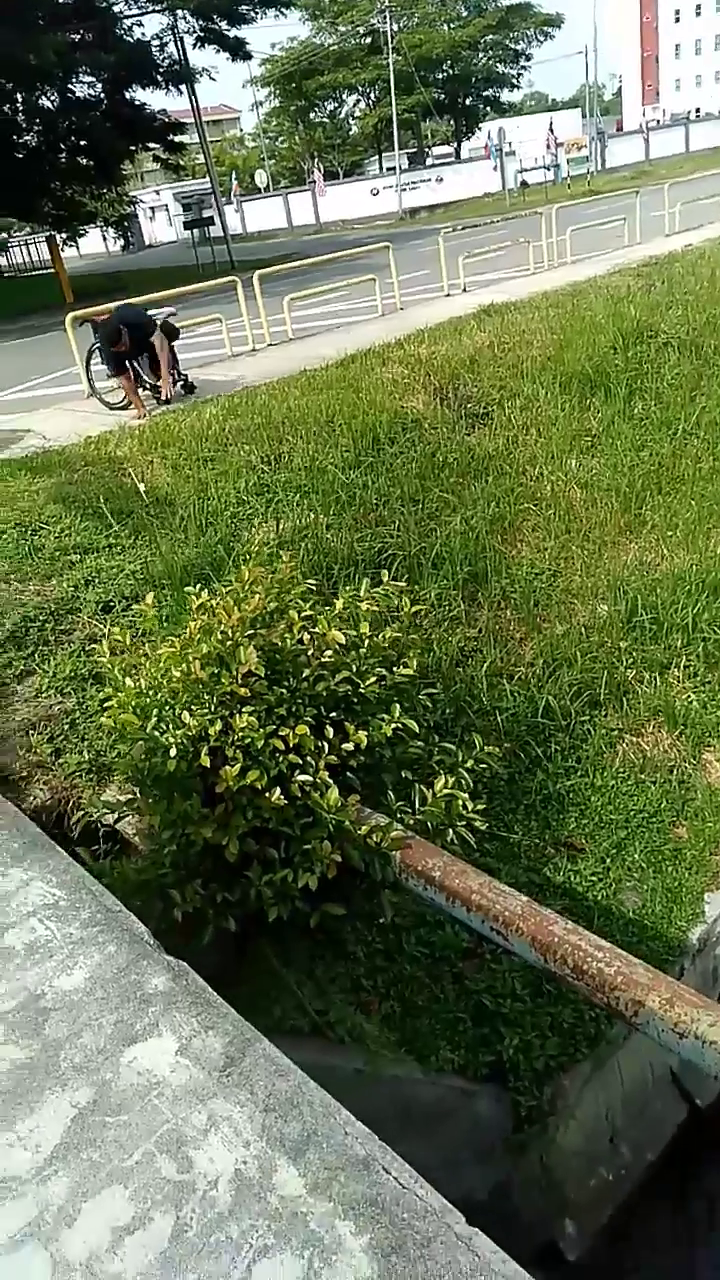 Mr Abu shared his rescue tale with an accompanying caption on the video which has garnered over 1,200 shares and 2,400 likes. 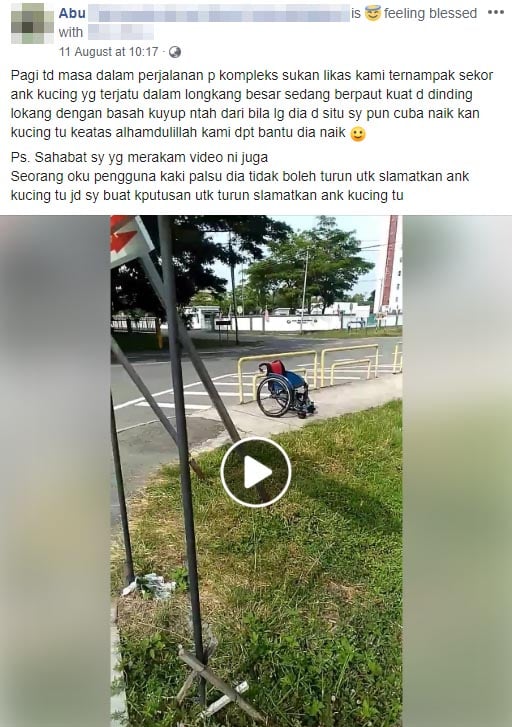 We translate his post in English and summarise the story below. You can watch the video in full here.

This morning on the way to Likas Sports Complex, we saw a kitten that fell into a big drain struggling to hold on to the edge. It was completely drenched and we’re not sure how long it has been there, so I tried to lift the kitten up and alhamdulilah, we managed to help it climb up.

PS. My friend who recorded this video is also a person with disability. He wears a prosthetic leg so he couldn’t go down to save the kitten together. That’s why I decided to climb down and save the kitten myself.

Mr Abu, who hails from Sabah, Malaysia, went full-on saviour mode to save the kitty. His heroic deed was captured by his friend and uploaded on Facebook last Sunday (11 Aug). Arriving in a wheelchair, he may not ‘look the part’ of a typical ‘superhero’. But Mr Abu Fathiyyaturahma was not about to let his limitation stop him from saving the trapped kitten.

Saw the kitten struggling to hold on

Mr Abu shared that he headed to a nearby sports complex with a friend when they came across the fallen kitten.

The kitten was trying to hold on to the concrete. It was all wet. Not sure how long it has been there. So I tried to pull the kitten up.

He got off his wheelchair without hesitating, even though it was visibly sunny AF in the video. 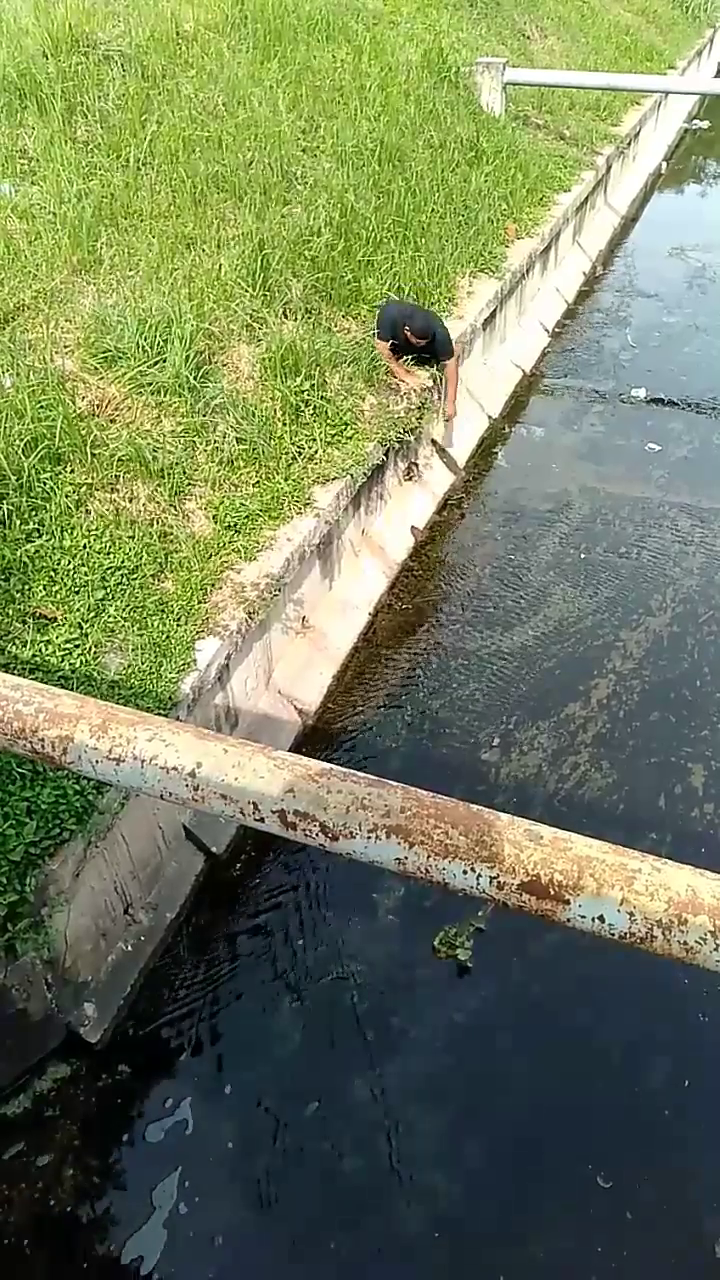 Steadily supporting himself using his arms, Mr Abu carefully reaches towards the edge to see if he could reach for the kitten.

Once he got to the little critter’s exact location, he swiftly scooped it up and placed it on the grass.

Praise be to God, as Mr Abu puts it, that he managed to lift the kitten up from the harsh, cold depths of drainage water. 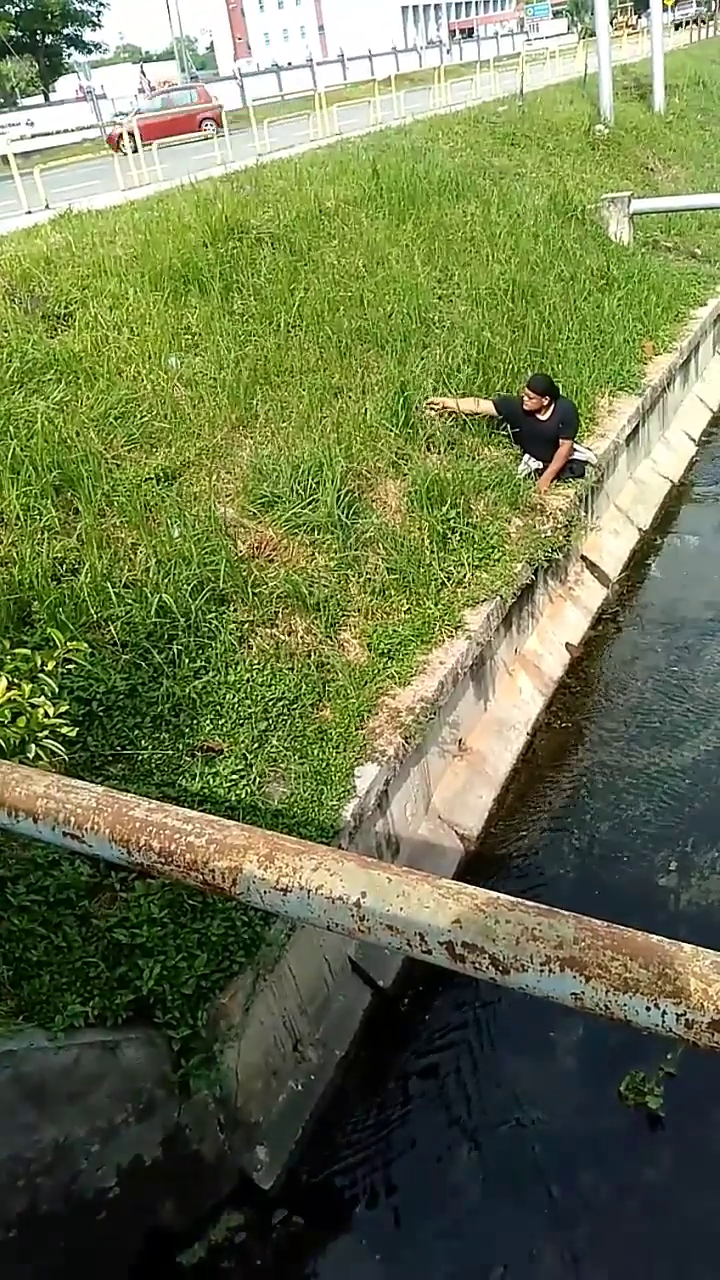 Abu’s friend couldn’t save the kitten together

Leaving a footnote, Mr Abu informed that his friend, who recorded his noble act on camera, was also a person with a physical disability.

My friend wears a prosthetic leg so he couldn’t come down to save the kitten together. So I decided to do it on my own.

We’re sure the animal-loving community are equally thankful to both men.

A hero among us all

Netizens are showering praises for Mr Abu and his indomitable spirit.

This Facebook user writes in Malay that Mr Abu’s deed was proof that he’s a loving man.

Another Facebook user writes in Chinese that she highly respected his exemplary behaviour, and that love should transcend species.

Animal lives are just as important

It goes without saying that all animal lives, even the life of this tiny kitten, are just as significant. And it’s moving to see humans going to great lengths to rescue them.

Hopefully the kitten can find its way back to its mama and stay out of harm’s way. Thank you, Mr Abu, for saving a life.