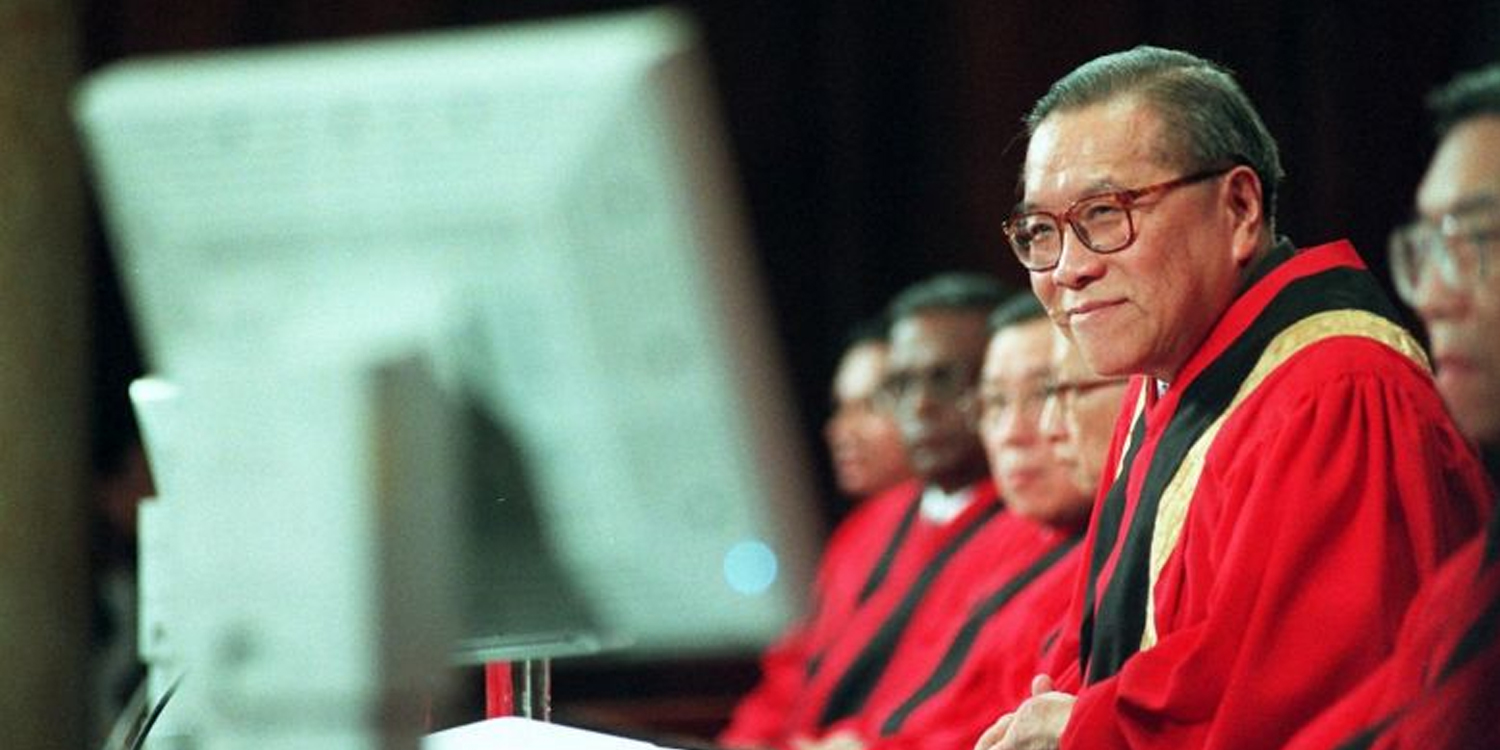 It’s always sad when we have to say goodbye to a notable figure in the law. Chief Justice Yong Pung How, who passed away today (9 Jan) aged 93, was a bona fide titan in the legal industry.

His cutting wit and keen legal mind made him a true force to be reckoned with. He will be sorely missed.

To honour his memory, here are 5 facts about the legendary lawyer and judge that you might not have known.

If you’ve ever watched any show about the law from the BBC, you’ve probably seen judges and lawyers wear stuff like this:

Chief Justice Yong, despite being trained as an English Barrister, did away with many of the old English traditions surrounding court dress almost immediately upon taking office.

Thanks to him, lawyers no longer have to wear robes or wigs, and higher-ranked judges are no longer addressed as ‘your lordship’.

2. Was tough on perverts

2001 was a very busy year for perverts apparently, because Chief Justice Yong issued not 1 but 3 seminal judgments on sentencing for those convicted of various crimes of a sexual nature.

First, he handed out stiffer punishments for convicted molesters as a deterrent for would-be deviants.

Second, he got rid of the “ignorance” defence for adult men convicted of statutory rape.

Chief Justice Yong was the first one to prevent adult men caught having sex with under-aged girls from using the excuse that they did not know they were under-aged.

Third, he placed heavy penalties on online predators preying on under-aged girls. In 1 case, he slapped the offender with a 12-month prison sentence and the maximum fine of $10,000, and said that there was little excuse for such horrid behaviour.

“Why don’t you take a seat?”
Source

3. Transformed the courts into an efficient machine of justice

When Chief Justice Yong was appointed in 1990, the courts were suffering from a massive backlog of over 2,000 cases.

Through a combination of measures – including introducing technology, modernising the courts, cutting down on long-winded procedures, and reducing paperwork – he turned the Singapore judiciary into a justice-dispensing machine.

He even famously implemented a fine for lawyers to discourage them from submitting too many documents to appeals courts.

He was so effective that for the first time ever, courts started to go empty as a result of no-trial days — in 2001, about 10% of overall court time was unused.

In his early years, Chief Justice Yong lived and worked in Kuala Lumpur. So, whenever he visited Singapore, he would bunk in with Mr Lee at his Oxley Road home. Even after Mr Lee was elected Prime Minister, the two regularly met up for lunch.

They worked together often, and maintained a close lifelong friendship — it is thanks to LKY that he joined the Singapore Bench.

As he recalled, Mr Lee asked him to “become Chief Justice! Just clean up the whole thing.”

How lucky we are that he did.

5. Held various roles outside of law, including helping to form GIC & MAS

Chief Justice Yong had a long and colourful career and spent as much time outside the law as he did in it.

For nearly 20 years between 1971 and 1989, he was a banker. During this time, he not only founded 2 international banking companies but also served as Vice-Chairman of OCBC.

He even helped form both Singapore’s Government Investment Corporation and the Monetary Authority of Singapore.

Also a renowned thinker and intellectual, Chief Justice Yong served as the first chairman of the Institute of Policy Studies.

Scholar. Judge. Guardian of the Rule of Law.

Chief Justice Yong Pung How left an indelible mark on the Singapore legal system and industry, and he will not be soon forgotten.

Rest in peace m’lor- I mean, Your Honor.