Section 377A Of Penal Code Retained But Not Enforced, Pink Dot Expresses Disappointment 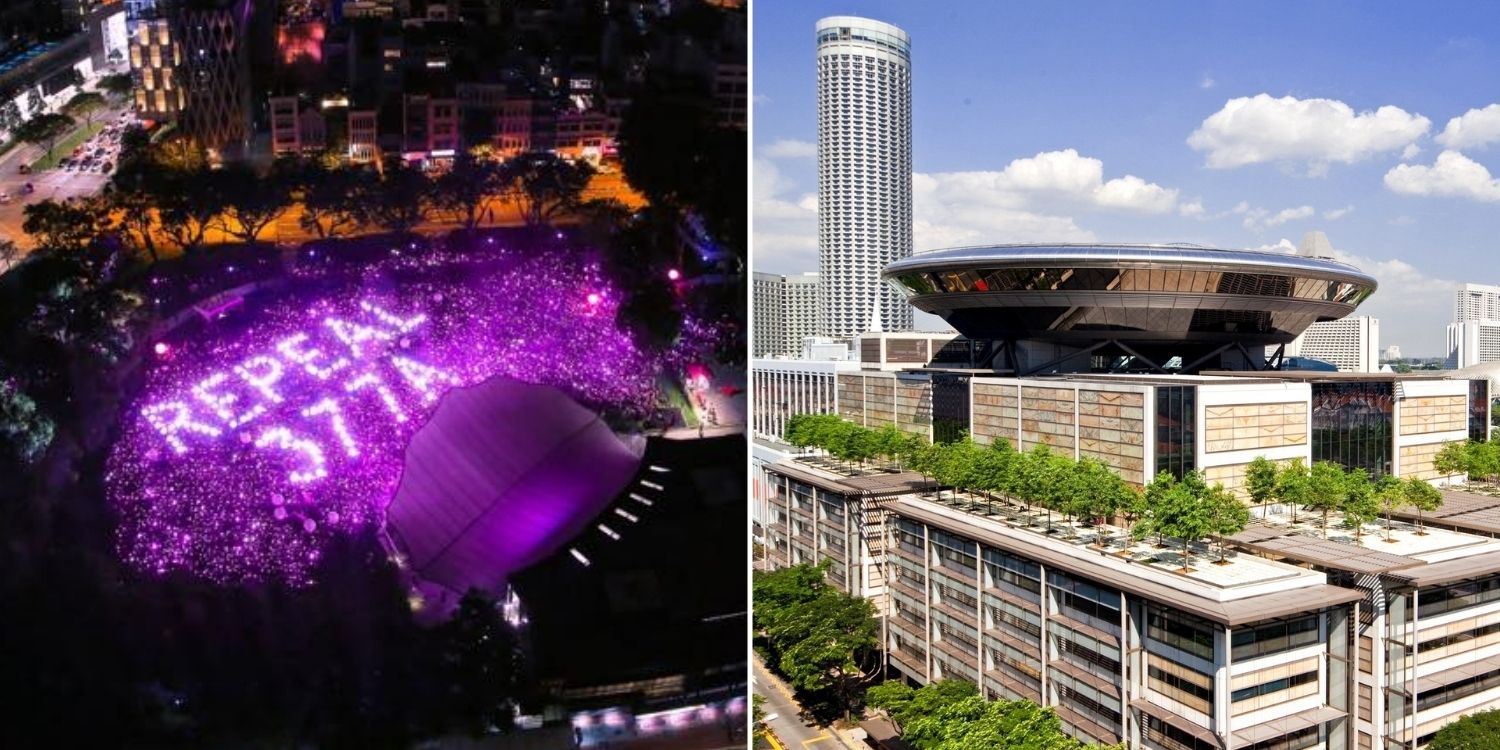 Because nobody can be prosecuted, it does not violate the constitution.

Section 377A of The Penal Code – which criminalises sex between men – has long been the centre of controversy in Singapore.

On Monday (28 Feb), the Court of Appeal ruled that Section 377A will remain in the books. However, it cannot be used to prosecute men who engage in gay sex.

This puts an end to the arguments contending that Section 377A is unconstitutional.

In response to the ruling, Pink Dot SG expressed their profound disappointment and urged Singapore’s leaders to act urgently and decisively to repeal the law.

Court rules that Section 377A will be retained on 28 Feb

According to The Straits Times (ST), the Court of Appeal ruled on Monday (28 Feb) that Section 337A of the Penal Code will be retained but not enforced. 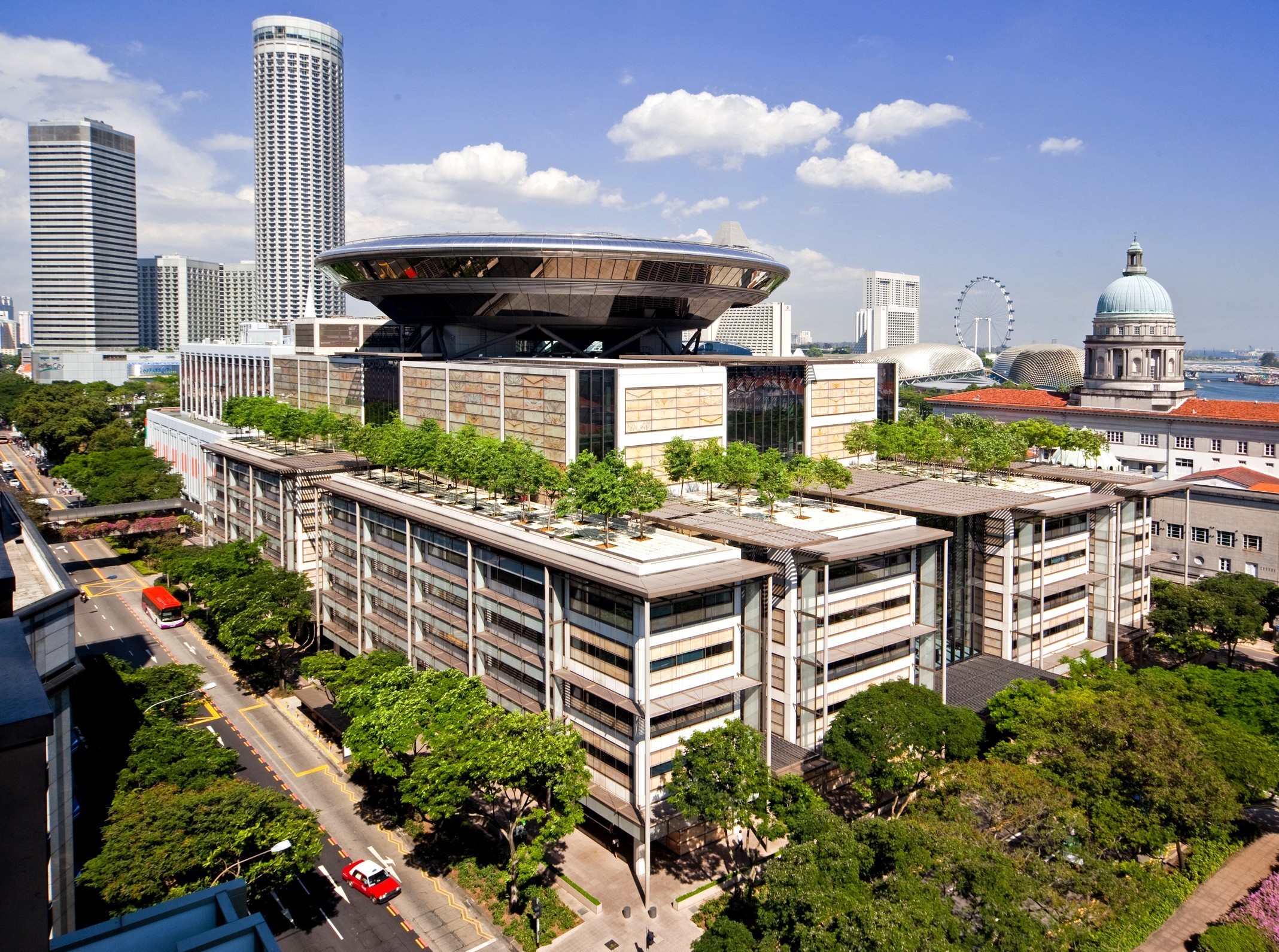 Chief Justice Sundaresh Menon delivered the ruling made by a panel of 5 judges.

The court held that Section 377A could not be legally enforced due to statements made by Prime Minister Lee Hsien Loong in 2007 and a press release by Attorney-General Lucien Wong in 2018.

We should recognise that homosexuals are part of our society. They are our kith and kin.

Hence, the court said that constitutional rights were not violated as nobody faces the legitimate risk of prosecution.

3 men contended that 377A is unconstitutional

They contended that the law criminalises sex only between homosexual men and not homosexual women or heterosexuals. Therefore, men were being treated unequally.

Additionally, they pointed out scientific evidence that sexual orientation could not be changed voluntarily.

In court, Chief Justice Sundaresh Menon clarified that these appeals were not about whether Section 377A should be retained or appealed. This matter, he said, was beyond their remit.

He added that this is also not about the moral worth of homosexual individuals nor the fundamental nature of sexual orientation.

Instead, the appeal is about whether Section 377A is inconsistent with the Singapore constitution.

But, he said, the ruling was a “deceptively easy answer” that “belies the underlying complexity of the issues that are before us”, reported Channel NewsAsia (CNA).

In a lengthy Facebook post responding to the court ruling on 28 Feb, Pink Dot SG said it was a “devastating blow to Singapore’s LGBTQ community”. 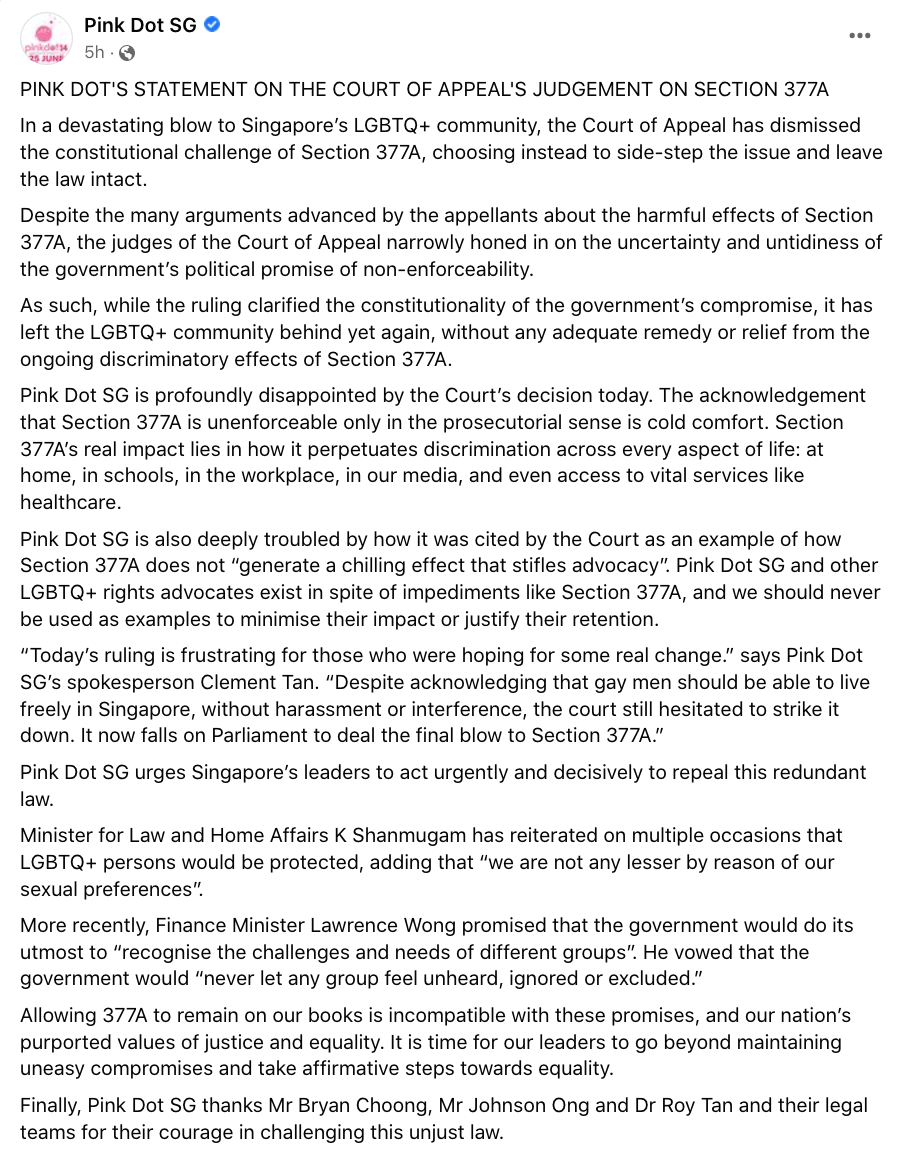 They expressed disappointment in this decision, saying that it does nothing to remedy or relieve individuals from the discriminatory effects of Section 377A.

Additionally, Pink Dot SG criticised the court for using Pink Dot SG as an example of how Section 377A does not hamper activism in Singapore.

They emphasised that LGBTQ+ advocates persist in spite of “impediments” like Section 377A.

We should never be used as examples to minimise their impact or justify their retention.

They elaborated that allowing 377A to remain in Singapore’s books is incompatible with these promises.

It is time for our leaders to go beyond maintaining uneasy compromises and take affirmative steps towards equality.

The fight for greater equality continues

Today’s ruling is aligned with PM Lee’s previous statement that Section 377A will remain indefinitely due to the nature of our society.

Despite advocates’ constant call for the repealing of Section 377A, this case is perhaps not within the Court of Appeal’s jurisdiction.

In the meantime, it looks like advocates would have to continue to fight for greater acceptance and equality in Singapore.